Pat Proft directed this satire on The Fugitive with a plot parody of the 1993 Harrison Ford movie, which in turn was inspired by the 1963-67 ABC television series with David Janssen. Violinist Ryan Harrison (Leslie Nielsen) romances the wife (Kelly Le Brock) of his benefactor (Michael York), a man murdered by mercenaries. Naturally, Ryan gets blamed. Headed for Death Row, he's on a bus involved in a train accident and escapes in order to locate the real killer Â— a one-armed, one-legged, one-eyed man. Tracking Ryan is Lt. Fergus Falls (Richard Crenna). Other movies lampooned here include Titanic, Clear and Present Danger, Chinatown, Mission Impossible, and North by Northwest. 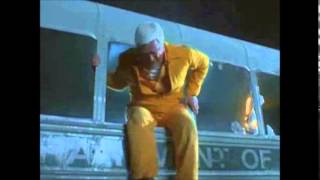 0
Quote O' Matic
Ash: "I think it's safe to assume that it isn't a zombie -Ash"
Alien

23
Guild_Navigator
Rise of The Machines!
A Retro Look At My Favorite EVIL Robots,Computers and A.Is
More Articles
An unhandled error has occurred. Reload Dismiss