Trail Mix-Up (1993) is the third and so far last in the Roger Rabbit shorts series. Produced and created by Disney Enterprises and Amblin Entertainment, the short features Roger Rabbit, Baby Herman and Mrs. Herman at the park setting up camp. Mrs. Herman plans to go hunting and leaves Roger in charge of watching Baby Herman. Trouble begins when Baby wanders off in the dangers of the forest and Roger has to go save him. A fourth short, Hare in My Soup, was cancelled during pre-production with three more (Clean and Oppressed, Beach Blanket Bay and Bronco Bustin' Bunny) in the planning stages also cancelled. 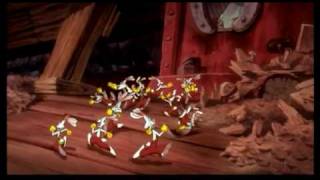 0
Quote O' Matic
Veronica: "Betty finn was a true friend and I sold her out for a bunch of swatch dogs and diet coke heads -Veronica"
Added By: System
Heathers
An unhandled error has occurred. Reload Dismiss