Time stamped goodness of one the the 80s best films/17 or older
By JohnMatrix
On
John Matrix here, ready to provide the second installment of the newly minted running diary series. Today we will be following possibly the greatest action movie of the 80s, Predator, starring the always loveable Arnold Schwarzenegger(do you know they added his last name to spell check? Thats how you know you ve made it)as Dutch. I bought the DVD a few years back at Half Priced Books along with some ancient horror novels(I think they wrote down my license plate after I left, in case a hitchhiker went missing) As always Ill try and highlight the badass quotes that make this movie great(BAQ) ,which to speed things up Im copying and pasting from IMDB(which as all movie fans know is a gift from God). Without further Adieu, here we go!

Side Note: Me and a few friends tried creating a Predator drinking game where you did a shot every time the camera went into heat vision mode. Not surprisingly only two of us survived(just like the film!). Three would have, until my buddy tried climbing down a tree face first.

0:00 The title screen stares ominously back at me, without any special features, unless you count theatrical trailer, and language selection. Just a little bit different then the LOTR extended editions that came with 38 discs.

0:01 Is it just me or does the Predator shop look kinda like the ship from Earth Girls are Easy? I think in a deleted scene they show one Predator wiping out their entire planet, or maybe Im just wishing out loud. 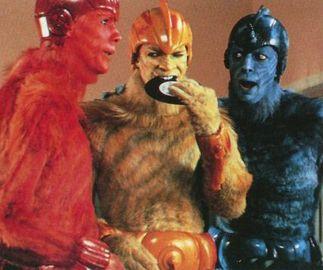 Their only weapon? annoyance.

0:03 Apparently the army had casual Fridays back then, because the elite team, that just landed, hopped out in clothes that they sold at Kohls in the mid eighties. Or they killed an entire shuffleboard team in Miami on the way there.

0:04 Our introduction to Dillon(Carl Weathers), Dutch and Dillon proceed to have the manliest greeting in cinema history that nearly culminates in Dillons arm nearly breaking. Plus the camera focuses on their bulging bicep handshake about 3 seconds longer then needed. This is just the first in a line of many rippling, sweaty physiques highlighted in the film that made me question my sexuality. 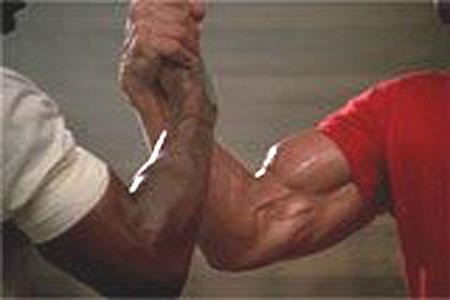 (BAQ)Dutch: [Dillon is losing at arm wrestling] What's the matter? The CIA got you pushing too many pencils? Huh? Had enough?

0:05 I almost forgot. Dillon is dressed like Milton from Office Space.

0:06 For a team that relies on stealth they are playing that Little Richard music a little too loud.

0:08 We see the teams interaction with one another and are provided with one the premier quotes of the movie from Blaine(Jesse the Body Ventura)

(BAQ)Blain: Bunch of slack-jawed faggots around here. This stuff will make you a god damned sexual Tyrannosaurus, just like me.

I think he used that quote in his campaign for a school voucher program when he was governor of Minnesota. And yes for those of you scoring at home, in a movie about an invisible alien that hunts people there were two governors, including one that runs one of the worlds 20 biggest economies. Suddenly the Predator isnt the scariest aspect of this movie.

0:16 Billy(Sonny Landham) discovers the skinned corpses of three soldiers hanging upside down. On an unrelated note, all of a sudden I have a hankering for KFC grilled chicken.

0:17 Did I forget to mention Bill Dukes(of Commando fame) plays Mac in this flick? If I opened a Action Movie background actor Hall of Fame, hes an easy first ballot choice. For all the action movies he was in do you think they offered him a chance to buy in on Planet Hollywood? He probably couldnt afford it, but he could have sponsored a table or a kitchen.

0:18 If you are playing the Predator drinking game you just took your first shot. Based on prior experience, call ahead to Bell Ambulance and set up an appointment in a bout an hour, cause by the time your done, your vision and communication skills will be slightly altered.

See, in about 30 seconds time youve just done enough shots to blow above the legal limit. The Predator drinking game was developed with good intentions, but always ends with peoples eyes rolling into the back of their heads.

0:20(BAQ)Mac: Youre ghostin us, motherfucker. I don't care who you are back in the world, you give away our position one more time, I'll bleed ya, real quiet. Leave ya here. Got that?

Just a great quote, perfect to say to a loud nephew while hiking during a family camping trip. Perfect if you want to scar him for life that is.

0:21 The team stumbles across the guerilla camp about two minutes too late as Dutch gets to watch a hostage shot in the head. On a side note the camp resembles the christian youth camp I attended in grade school, except for the head shots. But the truck run generator? We had that.

0:24 For a quote unquote rescue team they sure relish in killing the forty guerillas staying there.

In Commando we had to wait over an hour for unbelievable levels of death and destruction, Here? 25 minutes Part of the reason Predator gets the slight nod.

0:26 Even Hawkins(Shane Black) gets a confirmed kill, and hes wearing the glasses Mike Myers wore during the Coffee Talk skit on SNL.

0:27 This firefight is turning out to be the Globetrotters vs. Washington Generals of warfare. Im half expecting Dutch to kill a man with a bucket of glitter.

0:27(BAQ)[after Dutch has nailed a guy to the wall with his knife]
Dutch: Stick around.

Its always good to rub it in the face of a mortally wounded man, whose spinal cord youve severed by impaling him to a post. Just another reason that maybe that job in Libya was a little more up their alley.

0:28(BAQ)Blaine: Son of a bitch is dug in like an Alabama tick
Poncho(Richard Chaves): Youre hit, youre bleedin man.
Blaine: Aint got time to bleed.
Poncho: Oh, OK. Got time to duck?

Ventura actually used this quote for the title of his book. How come Oprah never picked that for her book club?

0:30 Instead of typing the awesome dialogue between Dutch and Dillon, Id usually just link to the you tube clip instead if I could find it, but alas its in hiding. If anyone has it, throw it up on the comments please, thanks.

0:32 No animals were hurt in the making of the film, expect for the scorpion that Mac just stabbed. Apparently arachnids dont fall under PETA protection.

0:33 Shot!(Are you beginning to see how this game could get out of hand quick?)

0:40 Shot! If I was actually playing the drinking game again, the rest of the diary would look like this - aehtja ha oer cpa peh gawg wh goae aow galosh vaow goaw ociw gcoc awg, because Id have passed out on my keyboard.

The only known survivor of the Predator drinking game

0:42 The first soldier to be killed by the Predator is Shane Blacks Hawkins. Did you know that he had a hand in writing or developing all 5 Lethal weapon films along with a bevy of other cool to semi-cool films? Check out his imdb profile:
http://www.imdb.com/name/nm0000948/

So in addition to 2 governors, Apollo Creed, and an action film character HoFer, weve got a top notch writer in the squad? Im guessing Richard Chaves and Sonny Landham skipped the 20 year Predator reunion because of career embarrassment.

0:43 Either Poncho stumbled across Hawkins intestines or someone spilled a big plate of lasagna.

0:47Kiss Blaines ass goodbye as the Predator blows a hole in his chest. Its too bad, I wanted that shirt.

0:48 The team wastes approximately 90 percent of its ammo shooting wildly into the jungle, as the Predator escapes. They suck at ammo conservation, but they just might be the coolest landscapers ever.

0:50 Our introduction to the Predators neon green blood. Quick note: as kids me and my friend would play predator by cracking open glow sticks and pouring it over our clothes. By the amount of chemicals I asorbed, Ive easily cut fifteen years off my life.

0:51 Mac says his final goodbye to Blaine. Even though I crack jokes about this movie, that part always tugs at the heart strings, seriously. OK enough of the sentimental stuff. Back to the show!

0:56(BAQ)Billy: I'm scared Poncho.
Poncho: Bullshit. You ain't afraid of no man.
Billy: There's something out there waiting for us, and it ain't no man. We're all gonna die.

Way to be optimistic Billy

See? If you were on the fence about Bill Dukes place in action film history, that quote should help nudge you. Im trying to decide if I want Bill Duke to be the godfather to my first born. Im gonna go with yes.


0:58 They joke about the pig that mac just stabbed to death. Um guys? Didnt two of your closest friends just get murdered like 5 hours earlier. Thats a pretty short period of mourning.

A perfect quote for your yearbook, if you want to be put on the FBIs most watched list.

1:02 The other- way to many camera views of sweaty bulging man muscles- shot of the film. Thats it. The shot of Carl Weathers missing his shirt has officially flung me out of the closet at subsonic speeds.

Carl, will you be my valentine?

1:06 Poncho takes a six hundred pound log to the chops. I havent seen that much wood fly at a man since the end of John Holmes film career.

1:13 The Predator blows off Dillons right arm, turning him into the drummer from Def Leppard, yet he still has the where withal to unhitch his gun, until the Predator guts him like a fish. His scream is scarily like the one I made when the chick I spent 3 hours with and dropped fifty bucks on drinks at the bar last week told me she had a boyfriend.

1:14 Billy decides to face the Predator with just his knife, possibly the worst cinematic decision of all time narrowly edging out the countless jocks that decided to check out the strange noises coming from the bushes in the Friday the 13th series.

1:15 Poncho takes a laser blast to the temple. Ive had bad days but his takes the cake.

1:17 I don t know about you, but that slide that Dutch goes down looks fun as hell, except for the part where he nearly belly flops onto jagged rocks.

1:22 Dutch prepares for his showdown, by hoisting a giant log for the second time that day. He also build a bow and arrow set capable of impaling two foot thick trees, builds leaf grenades, and countless traps. Although as anyone whose has seen this film knows, all his work is pretty much squandered within three minutes.

1:36 The last Shot! Of the film . If youve lasted this long they should name a wing of Passages Rehab Center in Malibu after you.

1:38 The Predator plays Coyote to Dutchs roadrunner, as he is crushed by a log. Meep Meep!

1:41 for only getting about three hundred feet from an atomic blast, Dutch is still in pretty good condition.

With that, Dutch escapes albeit slightly scarred mentally and physically on a helicopter flying into the distance.

This movie never gets old, and like Ive said before, its possibly the greatest action film of the 80s. I hope you enjoyed the diary. Stay tuned as the next film on deck is Bloodsport, the JCVD super film.

26
JohnMatrix
Commando Running Diary
Timestamped rundown of one of the greatest flicks of all time /17 or older
An unhandled error has occurred. Reload Dismiss