Two children's books from an award-winning author
By NZPopCuIturePie
On
Recently, I decided to start a big project and that was to compile collections of New Zealand pop culture and archive them for historical purposes.

Two great examples of such pop culture would be two books that have been a big part of New Zealand childhoods - Grandpa's Slippers and Grandpa's Cardigan. The books are by Joy Watson, a New Zealand author. I'm not sure how well known her publications are overseas, if at all, but many of her books have been published by Scholastic Corporation which operates worldwide. 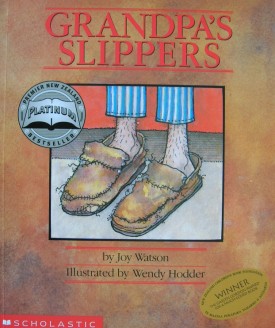 Grandpa's Slippers is the first book of the Grandpa's series and was first published in 1989. The story is of a grandfather who's slippers are falling to bits and over the course of a week, the stitching comes undone until eventually they fall to bits in Grandpa's hands. Over this week, Grandma repeatedly tries to convince Grandpa to wear the new slippers that she purchased for him by attempting to give his old slippers away and trying to hide them amongst other things. Eventually, Grandpa tries on his new slippers and is glad to wear them, only to be told by Grandma that he needs a new cardigan. The book was a finalist for the Aim New Zealand Children's Picture Book of the Year Award 1990 and won the 1999 Gaelyn Gordon Award for proving to be a favorite amonst children. I'm not surprised by this because it was a book that I would want to read again and again as well as look at the pictures. There was a copy of this book at my house, at my school and at my cousin's house. While I didn't know of the book's awards at the time, I somehow knew, even at such a young age, that it was a local classic. 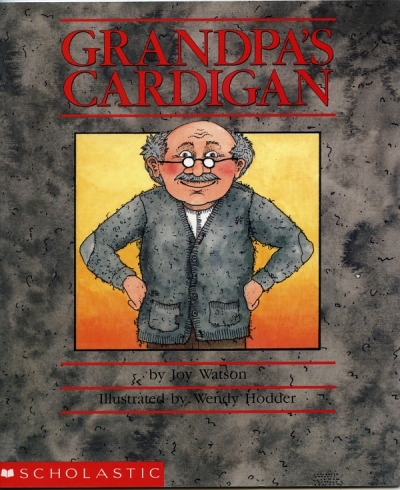 I always enjoyed going to my cousin's house for many reasons. For example, it was near a beach and there were some cool toys to play with. But I also knew that they had Grandpa's Cardigan. I've never forgotten the time that my uncle read the book to me and it's probably my favorite childhood memory that I would associate with him - almost. The book came out nearly half a decade later than Grandpa's Slippers and although Grandpa's Slippers would be considered the quintessential book of the series, I personally prefer Grandpa's Cardigan. The sequel sees Grandma sell Grandpa's cardigan because it had equivalent problems to his old slippers. Grandma repairs the cardigan, but suggests that Grandpa went and found a new one, because she would be glad to never see the old cardigan again. Grandpa then decides to look for a new cardigan in town asking in stores for a comfortable gray cardigan that isn't too expensive. But the stores either don't have gray cardigans, the cardigans are too uncomfortable or they are too expensive. Close to giving up hope, he goes to one final store that has exactly what he is looking for and when he goes home, he shocks Grandma. Grandpa has no idea that his new cardigan is his old cardigan. 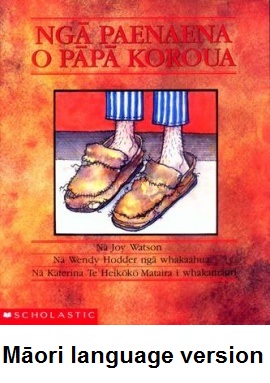 The Grandpa's series isn't just those two books though. There have been other publications since then. Grandpa's Shorts was published in 2001 and won the New Zealand Post Children's Choice Award in 2002. Grandpa's Shed followed in 2003 and Grandpa's Cat in 2006. Of these three, I have read the former two in a bookstore out of interest. From memory, the stories were fine; although I didn't purchase the books.

At the time of writing this article, the project that I referred to in my introduction has a foundation YouTube channel and I strongly encourage those who are interested to check out http://www.youtube.com/user/NZPopCulturePie. So far, it has a New Zealand counterpart to the many "90s kid" videos on YouTube, a video on local fast food chains and a video on 21st century culture but I'm looking to create new videos and improve on the current videos. Feedback and suggestions are also appreciated. Last but not least, if by any chance of fate you come across any of the Grandpa's books in your life, I highly recommend them - especially if you have children.
7
Login To Vote!