The grand finale of my ideal block of cartoons for the holidays.
By Captain_Retrograde
On
To view part 1: http://www.retrojunk.com/article/show/5195/a-pop-culture-geeks-cartoon-holiday-block-1

In my hypothetical holiday feast, part 1 was the appetizer, part 2 was the main course, so now, before I actually start watching, it's time for DESSERT! Also known as:

For those of you in need of a quick recap of the prior parts:

I'd begun with the classic 1966 adaptation of How the Grinch Stole Christmas, and then skipped a decade to cover a large swath of holiday episodes from the 80's and 90's. We got to see how GI Joe, Garfield, the Simpsons, the Warner Brothers (and their sister Dot), and the crew of Planet Express celebrate the season; Tommy Pickles and friends learn about the meaning of Hanukkah; the holidays in wartime on Robotech; Sam and Max and Christmas being saved by the likes of Batman and Robin, the Tick, the Extreme Dinosaurs, the Men In Black, and even Pikachu! This time, we've now left the 20th century behind, and conclude my block with a selection of holiday installments from the early 2000's, beginning with: 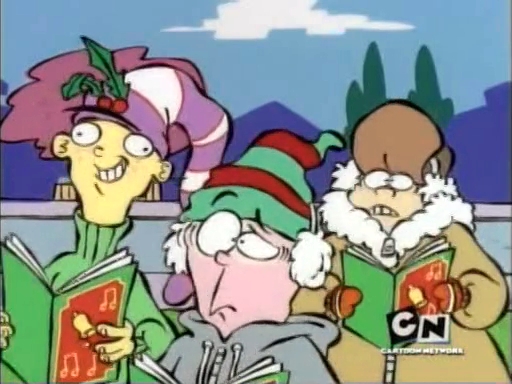 What's even better than Christmas? Christmas in July. Such was the subject of the important (to this list) half of this episode, in which stumbling upon an old fruitcake in Edd's closet causes Ed to think Christmas has come early, and his spreading of holiday cheer ends up ruining not one, but both of Eddy's scams. 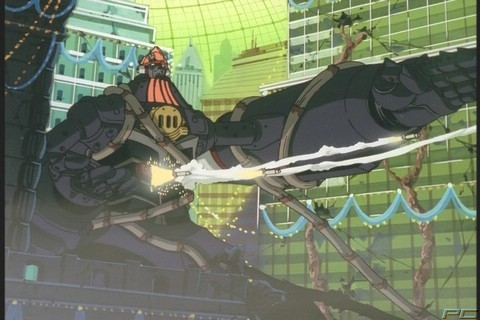 This is an interesting installment of the dystopian sci-fi anime in that it examines the idea of celebrating the holiday season, without even calling it Christmas. Here, we have 'Heaven's Day', said to be the date of the founding of Paradigm City, which is under threat from a series of emerald eggs (the titular daemonseeds) about to hatch. Both Roger Smith (pilot of the Big O) and his ally Col. Dan Dastun scramble to find them before it's too late. Meanwhile, Roger's android assistant Dorothy finds herself talking with Laura, the blind girlfriend of a saxophonist named Oliver (who accidentally was given one of the daemonseeds), who'll be playing in the city dome the day before Heaven's Day. 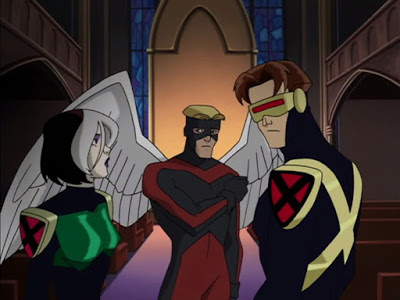 "Have Yourself a Morlock Little X-Mas" wouldn't be the only time audiences would see the X-Men celebrate the holidays on TV. A decade later, we'd see it happen in a successful cartoon series launched in the wake of the blockbuster X-Men film from the year before. In this story, while all the other students and staff of the Xavier Institute have gone home for the holidays, only Professor Xavier, Beast, Cyclops, and Rogue are left at the mansion. When news reports air of a mysterious 'angel' fighting crime across the city, Prof. X sends them to track the angel down before Magneto finds him. In addition to an episode that saw the debut of founding X-Man Warren 'Angel' Worthington III in the series, during the montage of X-Men with their families we also got to see Shadowcat celebrate Hanukkah. For me at the time, this stood out as I hadn't known about Shadowcat being one of the most prominent Jewish superheroes in comics. (Other notables include Moon Knight, the Thing of the Fantastic Four, Magneto, the Kate Kane Batwoman, and Ragman.) 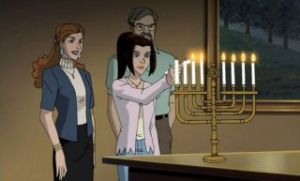 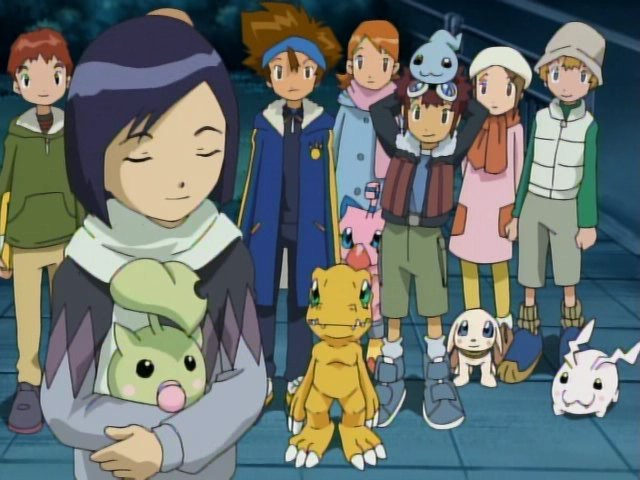 To paraphrase the Family Guy episode "The Father, The Son, and The Holy Fonz", when a franchise gets too popular, it's bound to have imitators. With Pokémon, it was very much a given, since it proved to be a juggernaut when introduced. Many imitators did show up, and probably the only real challenger aside from Yu-Gi-Oh! would have to be Digimon. When it came to me, Pokémon, and Digimon, it was the equivalent of Archie, Betty and Veronica. (Though unlike that famous love triangle, I went more for the Pocket Monsters than the Digital ones.) In this Yuletide adventure, Christmas is around the corner and the DigiDestined are in a festive mood. Ken throws a party for everyone, and the younger DigiDestined arrange to have the Digimon partners of the older group drop in for a visit. Unfortunately, at a concert where one of their own, Matt, is performing, a group of rogue Digimon attack, and both generations must team to save the (holi)day. 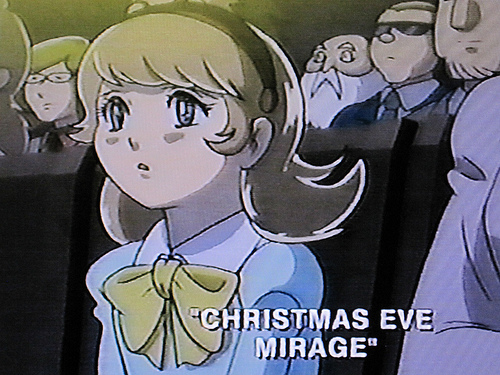 The early 2000's reboot of Cyborg 009 was my introduction to one of the oldest action manga/anime series in the world (as was Speed Racer a few years prior). When I was building up this list, this episode was a no-brainer. In it, while visiting her home of Paris during Christmas Eve, Cyborg 003 gets drugged by an agent of Black Ghost that sends her into a nightmarish hallucinatory state, as she recalls her dream of being a ballerina. 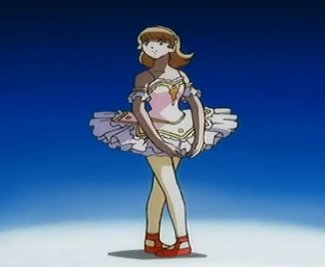 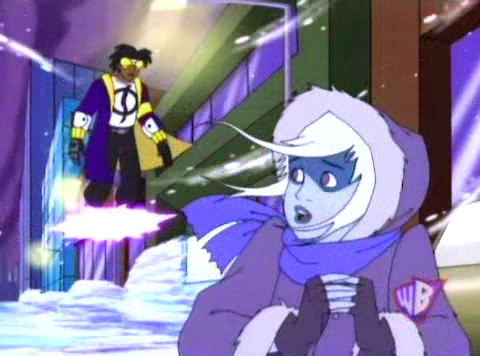 Static Shock is probably the most famous of the Milestone Media superheroes, and I'm still a fan of the series today (and seriously wish they'd do a complete series DVD set already). (RIP Dwayne McDuffie.) In this episode, the holidays are upon Dakota, with our hero Virgil splitting his time attending parties for friends of different faiths and, as Static, dealing with a cryokinetic Bang Baby named Permafrost, who turns out to be a traumatized homeless girl. 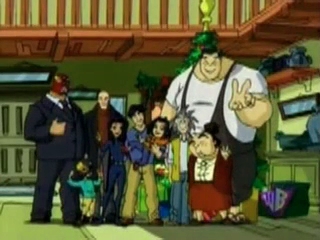 When it originally aired, I was a tepid viewer of Jackie Chan Adventures, but after re-discovering it on Netflix, I've come to see how much of a quality cartoon it was. In this holiday-themed installment, Jackie, Jade, and their friends in the 'J-Team' (ex-thief Viper, luchador El Toro Fuerte and his sidekick Paco, and ex-Dark Hand enforcer Tohru) must save Christmas when sorceror Daolon Wong threatens to steal the chi of Santa Claus. 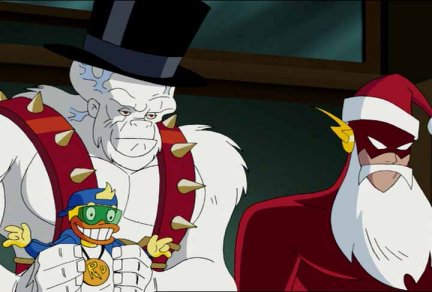 As a devotee of the DC Animated Universe, two holiday episodes of Batman: The Animated Series aren't enough. Thank goodness for this episode of Justice League! All the Leaguers (save for Batman, who spends Christmas day on Watchtower duty) take time off to celebrate the season in their own ways: Superman invites Martian Manhunter to his family's farm, Green Lantern and Hawkgirl go from a snowball fight to an intergalactic barroom brawl, and the Flash convinces the supervillain Ultra-Humanite to help bring some Christmas Eve cheer to an orphanage. 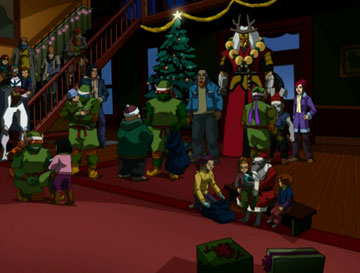 This incarnation of the Heroes in a Half-Shell was my major introduction to them (though my cousin had some of the toys in the 90's), and when picking this episode for the block, I had no idea it was based on an actual comic story. In it, Michelangelo stops members of the Purple Dragons from stealing a truck full of toys to be donated, and also takes in a stray kitten. Meanwhile, the other turtles and Master Splinter get the lair ready for a big feast where all their friends are invited. 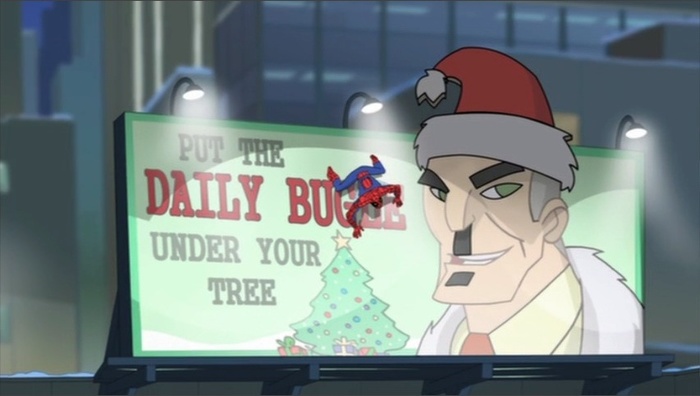 I simply had to include this episode from a fan-favorite take on Web-head, and it has the action and wit to back it up. In this episode, with Christmas approaching, the Sinister Six reforms, with Kraven the Hunter and Mysterio replacing Doc Ock and the Shocker to join Sandman, Rhino, Electro, and the Vulture, all out to get Spider-Man once and for all. Meanwhile, Peter's got to do something about his wandering eye if he wants to be with Gwen. As I mentioned, this episode had a good amount of wit and action going for it, as this scene exemplifies:

A semi-frequent event in Transformers comics, but quite rare in Transformers animation, I end my block on a robotic note with this two-part episode where Optimus Prime and the Autobots are introduced to the holiday season. Their festivities come to a halt when rogue robot Soundwave returns and spikes their oil. The Autobots then wake up the next morning--human!

And thus, my list is set, I've checked it twice, and starting on Monday, I'll be watching everything on here in the lead-up to the 24th and 25th. So as a thanks to everyone who took the time out of their busy holiday schedules to read all three parts--happy holidays. And--a Festivus for the rest of us:
5
Login To Vote!
More Articles From Captain_Retrograde

11
Captain_Retrograde
"A Pop Culture Geek's Cartoon Holiday Block" #1
The first third of my ideal block of cartoons for the holidays.
An unhandled error has occurred. Reload Dismiss