Suicide? Yeah I heard about it, but if you see cartoons like these, you probably want to see this: 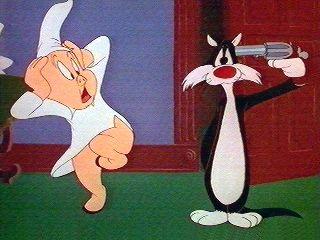 That's right, cartoons have had suicide gags. They were not very funny though....If they were, then television networks wouldn't have to remove these offensive gags. One example of suicide gags is the ending scene from Ballot Box Bunny. After both Bugs Bunny and Yosemite Sam realize that they both lost the mayoral race (in which the cartoon is all about), Bugs asks "Well, anyone for Russian Roulette?" Sam gets the first go, but the gun gets jammed and succeeds, but when Bugs gets his turn, a gunshot sound is heard, but it turns out that he missed, and Sam is hit instead. 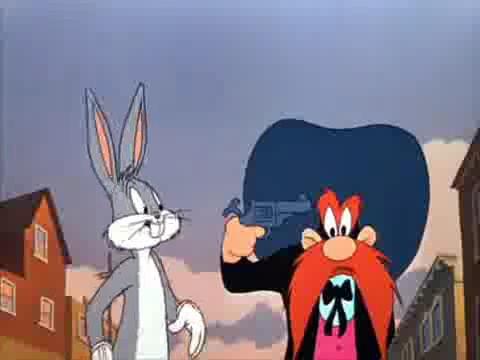 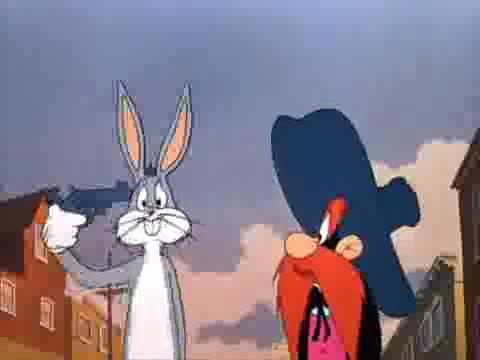 In these scenes above from Ballot Box Bunny, Bugs and Sam play Russian Roulette after losing the mayoral race. All TV prints removed the ending scene with a fake "iris out".

Another example is The Scarlett Pumpernickel's ending scene. After Daffy says "Is that all?" after reading a long script, he says "There was nothing for the Scarlett Pumpernickel to do, but blow his brains out, which he did." He then points a gun in his head and dies, but in a few moments, Daffy rises up the floor and says "It's getting so you have to kill yourself to sell a story around here!", but then passes out again. 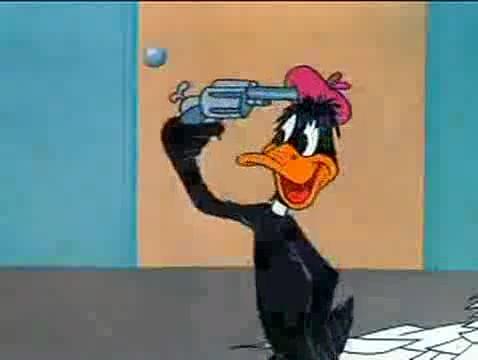 Many of these suicide gags have been long censored on TV. However, a particular network, Cartoon Network, allows suicide gags off-screen. For example, in For Scent-imental Reasons, Pepe Le Pew is heartbroken after Penelope Pussycat (you know, the cat who Pepe Le Pew chases all the time!) won't come out of a glass cabinet saying that it's because of his odor. Pepe Le Pew then pulls a gun from his pocket, puts it on his head, waves at the cat, and leaves, and in a few seconds, a gunshot is heard (note that he really didn't kill himself, he tricked the cat!). There is another suicide gag, in which Penelope threatens to jump out of the window. Pepe tries to avoid it, but ends up dropping her instead. He then puts his hand up and says "Vive l'amour, we die together!" and falls too, only to hit blue paint instead! However, it was only shown uncut on CN until 2003. 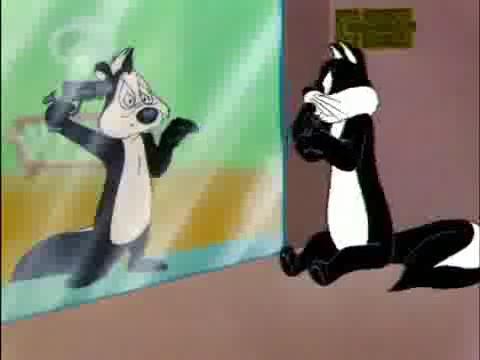 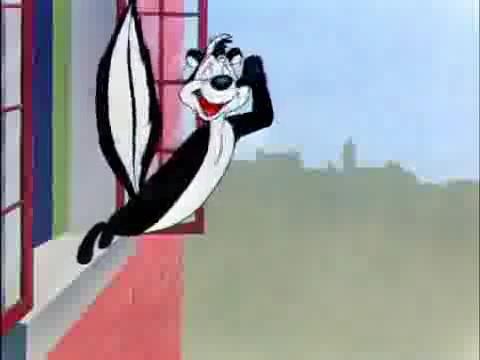 Censored suicide gags are sometimes helpful for television, but hurtful to older viewers. Some older viewers want to see the cartoons as it originally appeared in theaters, but as it turns out, cartoons like these are shown edited. Most people decide to get these cartoons on DVD (maybe that's why they stopped showing these cartoons on Cartoon Network). Warner Bros. does not encourage suicide gags to be on television, so that way kids don't have to be persuaded to kill themseleves (seriously kids, you don't want see people kill themselves).

World War II cartoons also have a part on suicide gags. For example, near the end of Plane Daffy, Hitler looks at the secret (which says "Hitler is a stinker") he reads the "secret", and says "That's no military secret!" Hitler's men, which read the secret, says "Yeah....everybody knows that!" Hitler gets enraged and his men cover their mouths. They then point guns in their heads, and pull the trigger, causing them to fall on the floor, which Hitler watches them kill themselves. 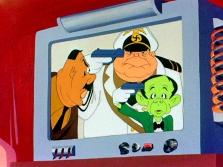 A handful of these cartoons that featured suicide gags have been retained in the Golden Collection set. If you are lucky, you may be able to find these gags on video. If you see these gags ever again, don't expect it. Never commit suicide, it is the characters' risks, not yours. 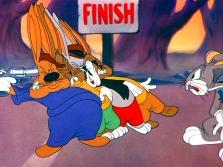 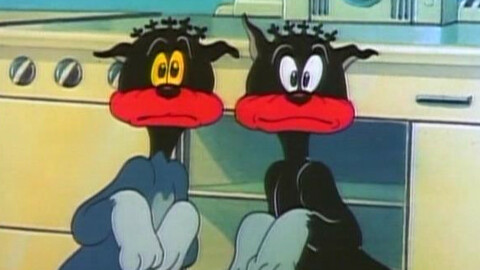 5
Mariorules
Tom and Jerry in...blackface?!
You might have heard about blackface in the years. T&J was one of them!

31
Quote O' Matic
Gordie: "Mickey is a mouse, Donald is a duck, Pluto is a dog. What's Goofy...? -Gordie"
Added By: System
Stand by Me
An unhandled error has occurred. Reload Dismiss