What Makes The Female Gobots So Much More Interesting Than The Female Transformers?
By Celeste
On
Being a kid growing up in the 80s I was exposed to a lot of things including a lack of strong female role-models to call my own. Now times the are a changing because there's a strong presence of female role-models but I thought that I would do an article about the differences in the female Gobots and female Transformers. Now before anyone tries to cut my head off with a katana blade I must say that this is my own opinion and does not reflect on the opinions of Retro Junk and retrojunk.com.

So here we go.

Round 1: Personalities of Each Character. 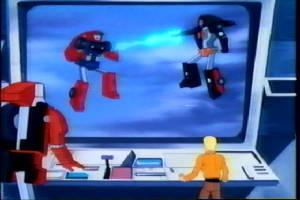 Small Foot and Crasher go mana al mana. Small Foot's personality shows that she's one tough cookie but in this pic it does seem like being tough isn't enough to beat Crasher.

Each of the female Gobots has her own personality traits that are more realistic than most women. I can't imagine why the Transformers didn't make their females like this? The Gobots seem to have each its female characters standing on her own two feet. At the very least female gobots are strong enough in personality and are willing to fight for their people's cause. 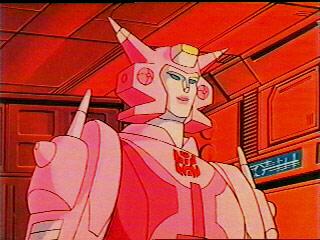 Elita-1 leads the female Autobots and has a calm genuinely non-aggressive mannerism.

Too much emphasis is put into T&A in the female transformers. That's t*ts and a*ses. Look Transformers girls have b**bs and butts but no personaities! What? Did they create female Transformers just so guys could have the pleasure of drooling over a robogirl that looks completely disproportionate with the rest of her body? I mean give me a break here. The Transformers writers tend to overuse T&A. They say that the female Transformers were designed to attract the female audiences to the show but I think it's more girly coloured robogirls designed for nothing more than eye candy.


I don't know about anybody else but I like my robogirls with brains and brawns not just brawns. Chromia seems to have the same type of personality as Ironhide. Just go barreling into the thick of the battle and not look out for your comrades in arms.

Ironhide and Chromia are two strongheaded individuals who embrace each other for a final time. Could this scene make me barf anymore? I don't think so. 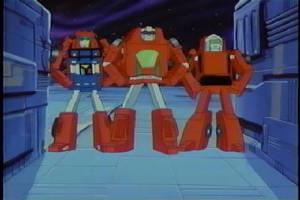 I suppose it could be because Turbo is a LT or it could be something else but when a Gobot LT says "follow me" nobody ever thinks to question his orders.

It seems to me that the female gobots not only have a better attitude towards themselves but they're almost always looking out for their fellow soliders. 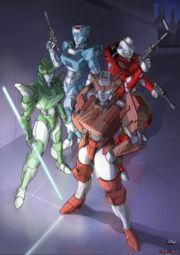 Energon theft isn't really good for the little ones to see especially since female autobots are supposed to be role models for young girls.

Round 1 goes to the Gobots

Round 2: How were the characters handled in the cartoon?

I must say I'm very impressed with the way that female gobots were handled in the Hanna-Barbera universe. The gobot robogirls were handled, personality wise, much better than the transformers robogirls. 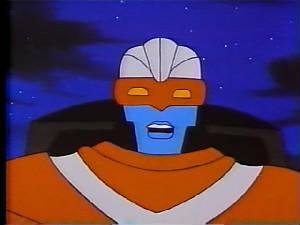 Snoop is a Renegade Spy and she's mean enough to knock Scooter around. 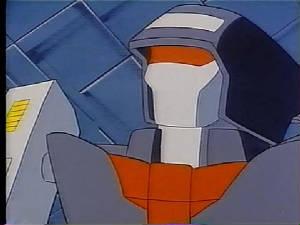 Pathfinder is a valiant guardian warrior with leadership qualities. This girl doesn't have a mean wire in her body. 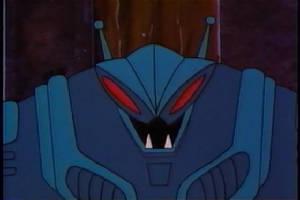 Vamp can be quite il-tempered when she wants to be. 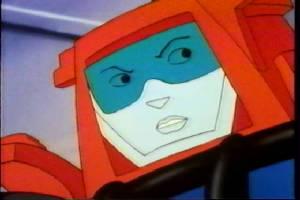 Small Foot is a rowdy tom boy who's impulsive nature has gotten her into trouble more than once and even made Leader-1 doubt her abilities as a Guardian solider.[/align] 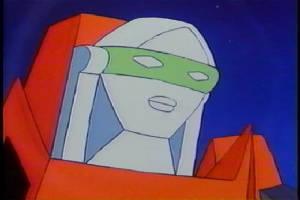 Sparky is a good natured gobot who wouldn't harm a soul. 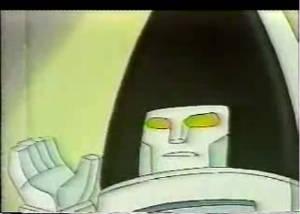 Spay-C is a strong silent type of gobot. Never says a word but gets the job done. 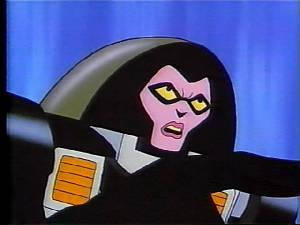 Crasher makes for a delightful bitch who will just go ploughing through any Guardian forces.

The female Transformers? Oh gee! How do I put this nicely so as not to offend any Transformers fans. I think when Alpha Trion created the female Autobots he forgot to put in logic circuits becuase these girls had none. 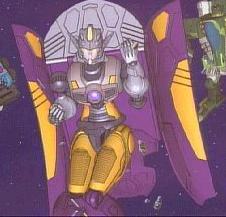 Thunderblast is but one example of a bad girl going too far in the chestal area. All you see is the imagination of some h*rny man who thinks that b**bs are more important than brains.

I won't get into the story behind Blackarachnia's body because it's not the most appropriate of stories but she's the other Transformer that I have had problems with physically. 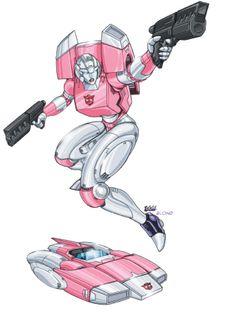 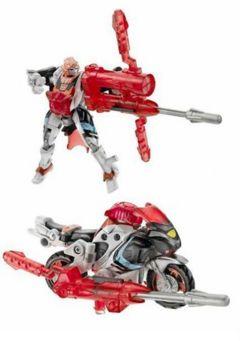 The thing that I liked the most about the Arcee character from Transformers Energon is that she was a strong character and the leader of the Ommnicon race. Although questioned a lot by her fellow Ommnicons she always commanded respect from the guys even if the guys hadn't been around a girl in quite some time.

Round 2 goes to the Gobots

May I ask what the hell is it with robogirls and having their feet shaped like 8 inch spiked heels? Not every girl in this galaxy can wear things like that. 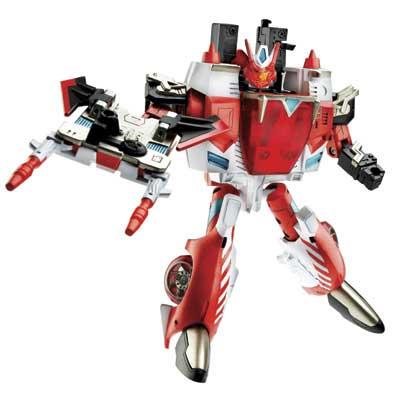 I don't get why Transformers robogirls need spiked heeled boots. It's not as if they're going to do any serious damage to their feet anyhow. 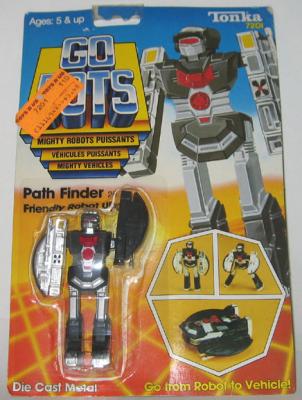 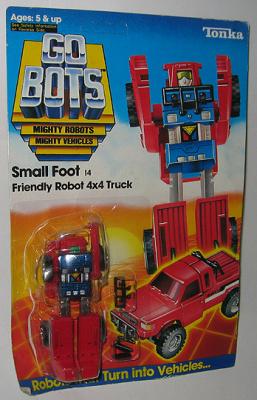 Gobot robogirls wear combat boots and you can stand them up if need be. 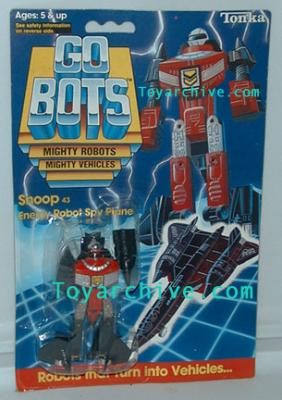 Gobot robogirls don't need to be anatomically correct. They just need the tough and rugged attitudes 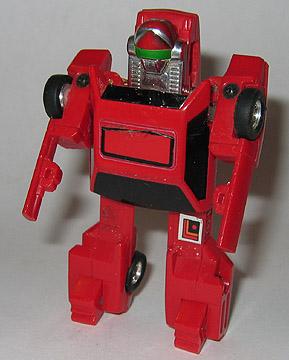 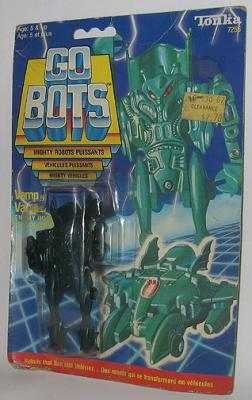 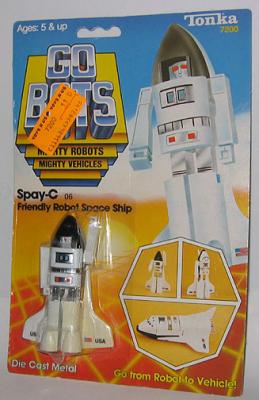 Coincidently there weren't any female Transformers toys until the advent of Blackarachnia circa 1996 but then again she was a recolour of Tarantulas and was very unimpressive. Then a newer Arcee toy was created for Transformers Energon and just last year Override for the Cybertron line came into play.

Round 3 goes to the Gobots.

I won't say which side I like better because I would probably get ripped upon in here but I will say this: Gobot females really do have more personality but the Transformers females are not without their charm. But Gobot females are tough in the cartoons and that's what makes them more interesting than the Transformers females. Again this article is all up to individual taste.

That's all she wrote folks.
-6
Login To Vote!
More Articles From Celeste