I'm In the Goddamned Club!

My testimonial to the film that forever defined my life: The Monster Squad.
By darkpumpkin
On
I am eternally grateful and indebted to coal mines. Without them, my existence would cease to happen and my introduction to The Monster Squad and my lifelong love of horror tragically never would have happened. You see, my mother and father had an unusual love story. They met while working beneath ground in the coal mines. This explains how my existence hinged upon a coal mine, as this is where they fell in love and proceeded to get married and pro-create. But The Monster Squad, you are asking, how is a coal mine responsible for that?

In the mid-80's, the mine had a massive fire. The miners took side jobs until they got called back to work, and my dad took one at a mom and pop video store, back when they still existed and weren't swallowed like small fishes from the piranha-like jaws of Blockbuster. The job came with its perks. My brother and I were the coolest kids on the block, as we got to see Rambo before anyone else in the neighborhood did. My dad would bring home promo stuff all the time, such as a My Pet Monster to coincide with the VHS release. There was excitement every night about what movie dad would bring home in its brick shaped glory.


It was around this time that I starting to fall in love. Mind you, I was 4, but I already had a blooming love affair at such a tender age. I was falling in love with horror and the monsters it gave birth to. My dad was divorced from my brother's wife, so I eagerly anticipated every Friday when I knew he would be spending the weekend with us. My brother and I bonded over Friday the 13th (I still remember how we grabbed each other when Jason came popping out of the water) and other slashers. They still remain as some of my happiest memories of my life. Before you go branding my parents as unfit, they always monitored what we were watching and as long as we didn't act freaked out or traumatized, they were totally cool about it. God Bless them.

It was while my mom stopped in to see my dad that I spotted THE BOX. I always would wander around the aisles taking in all the covers. This was the first one to make me stop dead in my tracks. The cover had not one monster, but three! And there were kids! This video store had the box cover and then the video was displayed behind the box. You could tell if a movie was being rented because the video wouldn't be behind the box. The video wasn't behind the box. I think it was the first time I ever experienced a broken heart, but it certainly wouldn't be the last. I could have cared less about what mystery brick dad would be bringing home, because I wanted, no needed, I needed to see this movie. Imagine my surprise when the mystery brick ended up being The Monster Squad! My dad had put it aside because he knew I would want to see it, but he would have no idea how much I would want to end up seeing it. 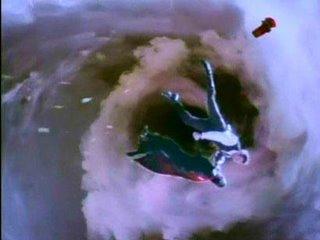 Try every day. Every single day. The preview for The Unholy that began before the film commenced has never left me. I can still conjure up the images in my mind without a second thought. I knew as soon as an exasperated Ben Cross yelled "Dear God! WHAT WILL YOU HAVE ME DOOOOOO?" and then the announcer ominously stating the tag line "The Unholy: You haven't got a prayer" that the feature film was about to start. And then there was the horse.The horse bursting through the clouds, or a cloud of smoke (I never did decide) with magestic music playing announcing the company. Then there was the red V standing for Vestron, so beautifully retro.

My mom helped me read the opening lines telling us how old Van Helsing "blew it." I was completely and utterly hooked from that point on. I wanted to have an amulet that could magically create vortexes. I wanted a "Stephen King Rules" shirt. One thing that was never wanting was a desire to be in the Monster Squad. You see, that's the beauty of the film. You never go "Oh man, I wish I was in a club like that," because the movie makes you feel as though you already are. When the kids are up in the clubhouse, you feel as though you are right there beside them. When Fat Kid is pumping his shot gun and proclaiming that his name is Horace, you are standing right next to him. When the kids are in the Jeep and the mummy attacks in the back, you feel the fear as well, because you are right there in the Jeep. You learn with the kids that Scary German Guy is more bitchin than scary.

I think that is where Monster Squad is fundamentally different from The Goonies. I love both films, but people tend to compare the two. I would say the difference lies in that with The Goonies, you always feel separated from the Goonies. You envy them and want to be them. With the Monster Squad, it never feels like a film. Call it the magic of nostalgia, but you always feel like you are right there with the kids. 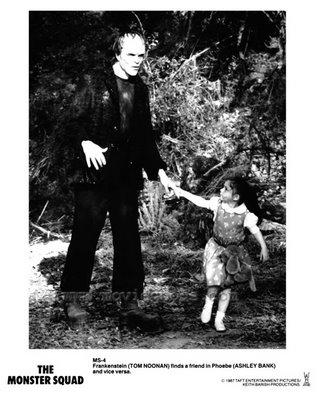 My love for the film resulted in my dad having to bring it home every night from work so I could watch, no, so I could live it. Over time, track marks began to lovingly show on the tape, a testament to my devotion to it. My dad's boss finally suggested that maybe my dad should just buy it off him. My father has bought me many things in life, including a college education and a car. But for a nominal three dollars, he forever cemented his daughter's devotion and love for him. Not to mention her most cherished possession. Before the DVD was released, I was offered insane and ungodly amounts of money for my VHS. A VHS that I have shared with my little cousins, instilling a love of the movie and monsters for them. I will never part with the VHS. It's a reminder of far too many things for me. It's a reminder of my youth and simpler times, it's a reminder of why I love this genre so much, and most importantly, it's a reminder of a father's love and unending patience for his daughter and the little monster he forever created as a result.
-5
Login To Vote!