Clash of the Mechanic Titans
By Achilles
On
Hello everyone. After a very long break (as a founder and one of the webmasters for the biggest James Cameron site, you really have a limited time) I decided to drop this little article, which would be a remake of my very first Retrojunk article in which I wrote very briefly about the RJ movies, and which I think was a disaster. So now I hope to go full circle and give Robot Jox a proper focus

Robot Jox (1990) was the movie I've seen the most time in my life (along with T2). I remember the movie getting a reasonable amount of hype, I've seen the trailers for it on plenty of VHS releases and my much older cousin who came from the States (I'm originally from Europe) kept talking about how cool this movie's going to be and being very excited about it. Plus, its been in the press like Starlog and such. When the time has come, I was blown away right after I found the VHS on the racks because in Europe it had a hologram, silver/gold shining cover, something I've never seen before (or since to be honest). Ever since I saw the movie, I kept renting it every single week

The hologram European cover was the coolest thing ever 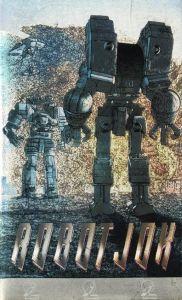 The movie was the only non-B movie from Empire Pictures and by far it's most expensive movie. It was their shot at big screens and trying out with big guys out there in the cinematic world. Not only the budget was almost 10 times the usual budget for straight-to-video flicks Empire was doing, but also some talented names were hired.
Ron Cobb was signed up as a designer, and his designs for the robots and their interiors translated into the screen virtually unchanged, especially Alexander's robot. For those who may not know, Ron Cobb is the guy responsible for ship and some creature designs in original Star Wars, and a person who designed Nostromo and its interiors in Alien, as well as the colony in its sequel, Aliens. Ron Cobb is not only known for really cool and real looking interiors, but also practical looking ones. For example, you can see the venting systems on the robots and those big "backpacks" they have contain fuel 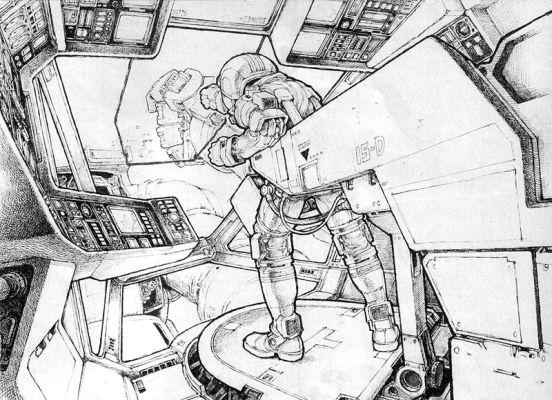 Another familiar name is David Allen, responsible for special effects on such movies as Willow, Honey I Shrunk the Kids and Ghostbusters II to name the few. The special effects, although now outdated, were quite good and they used a mix of techniques from puppetry, miniatures to stop animation. Many people say RoboCop II is the best stop motion movie ever, I think Robot Jox is 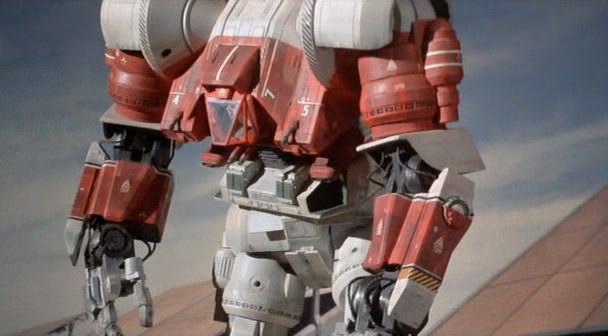 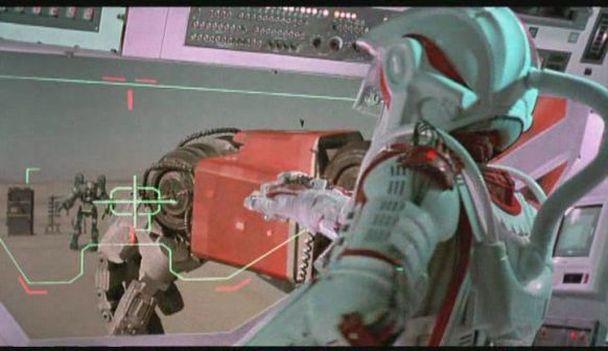 Other names that can sound familiar is the director Stuart Gordon who is best known for directing Re-Animator and the lead actor Gary Graham, most known from Alien Nation.
One name that is not known is Frederic Talgorn and this is the composer of the film. Supposedly he was told to imitate John Williams and whether thats true or not, he delivers an amazing, amazing Williamesque score.

The story is virtually a very interesting twist on gladiators. The gladiators, called Jox, fight one on one in an arena for territory with gigantic robots since the war has been outlawed after a Nuclear destruction. The dispute is over the 2 existing superpowers, the only left in the world - Market (USA) and Confederation (Russia). Each gladiator has to finish 10 fights before retiring, but the fights are so bloody and destructive that so far theres only one man who made it through 10 fights. 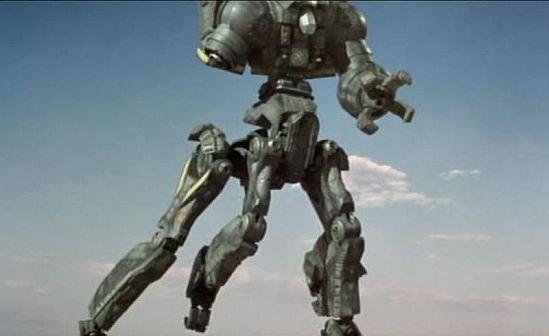 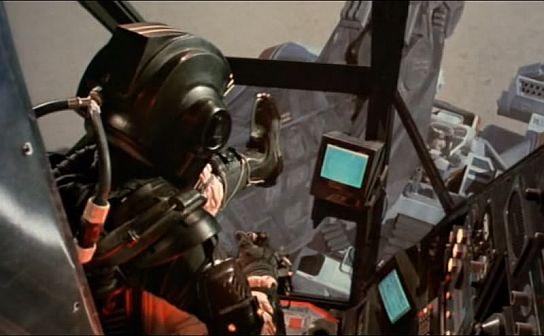 Two best gladiators who have 9 fights behind, Market's Achilles and Confederation's Alexander will fight for Alaska. This isn't as easy tho, as theres an accident during the first fight which makes Achilles depressed and finds him resigning, then theres a love story, things get personal etc. In the end, the two Jox find themselves fighting without approval, just among themselves for life and death 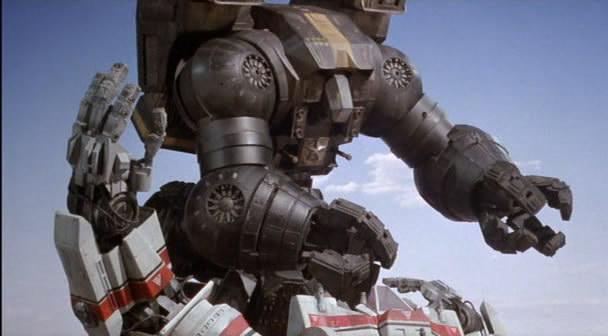 Of course for a 7 year old this movie was mind blowing. Cool giant robots, nice special effects (which became outdated just year later when T2 came out), the coolest looking robots ever. And I also wanna say that I don't consider it some kind of Transformers ripoff or anything. Its about 2 gladiators fighting in championship in giant robots, not about a group of big talking robots from space. The only thing in common here are just big robots, and if you ask me, thats a very general similarity. I still have fun seeing the movie, even though it's probably the most stereotype filled movie I've ever seen. The good guys are Americans, bad guys are Russians (who all speak with an accent and have blond hair), the mentor from Americans is a Texan wearing a hat with his uniform and speaking with Texan brawl, and the designer/technician for Americans is a Japanese guy. The race in technology is also touched upon very heavily, although Americans are shown to be behind and Russians have more advanced robots but only due to espionage. 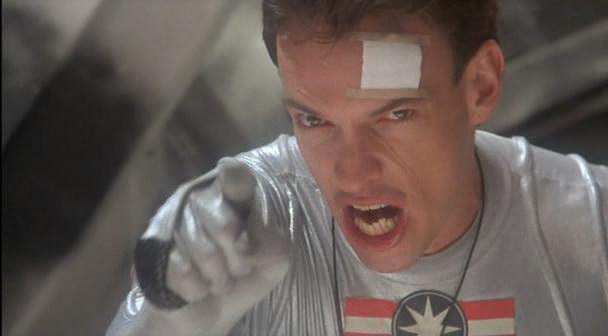 I also wanted to point out the sound effects and mix which is rather good. The robot sounds are very mechanic and very real, nothing cheesy, and the powerful thump of a robot foot can shake the room 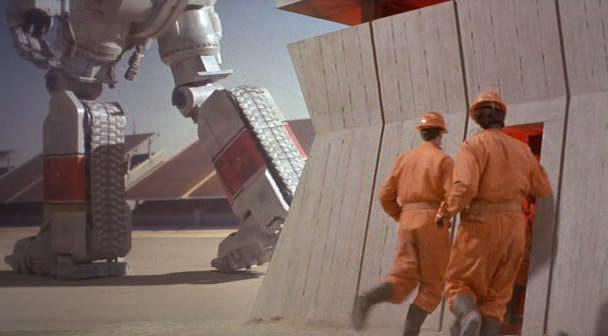 Now this is a movie that people either love or hate, without there being a middle ground it seems. I personally always thought its fun and still enjoy it very much. Too bad it was released only as a bare bones DVD. I know it was released in japan in big box set with tons of behind the scenes footage

I know the movie bombed in theaters so badly that it bankrupted the Empire company, since they spent so much money on it betting everything on one card. As to why, I don't know. Perhaps because by the time the movie was finished and released, Cold War was over so US vs USSR was already a thing of the past. I don't know.

Anyway, I personally was a huge fan of it and watched it every one or two weeks, kept drawing those robots and imagine I could pilot one of them. When Power Rangers came along and became popular, I was laughing how idiotic and silly and cheap those Zords looked like in comparison to the RJ robots. People looking like the cartoon Transformers dressed in a suit were just awful and it bugged me that none of my friends had seen a "real" giant robot movie.

But let's go back just a little. So after few months of seeing Robot Jox, I went with my dad to the video rental place and looked around in the scifi section. And what did I saw? Robot Jox 2: Crash and Burn (1990). My heart started pounding and I grabbed it immediately. Little did I know at the time that it was just an alternative European title given in some markets to a movie that's really not a sequel 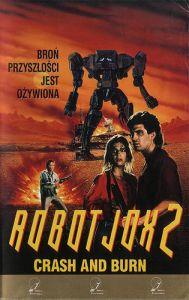 There was one major problem though. The movie was rated R and they didn't ant to rent it to me, and explained to my dad right in front of me that this is not a movie for kids. Imagine my disappointment. You know how a kid feels about something he can't have, especially when it's directly related to some of his favorite things.
I begged my dad entire week to rent it for me, cleaned up my room, did my homework right after school etc, and he finally agreed. I was so excited that day when we went back to the rental place. Unfortunately, it was a repeat of the same story, they underlined the fact that it's R and then explained to me that there are no robot battles in this one and that it has nothing to do with the first movie. Of course I didn't care, Robot Jox is Robot Jox and there was a sequel to my favorite movie ever that I couldn't see. And remember, back in the days sequels were almost or as good as the originals (Aliens, T2, Back to the Future 2, Lethal Weapon 2, Ghostbusters 2 and on and on). After that I even used to just go there to look at the cover for few minutes, I wanted it so badly that I couldn't wait till Ill turn 18 to rent it! But I was around 10 then.

In the meantime, I caught 'Robot Wars' (1993) on TV, which I now know was also titled Robot Jox 2 in Germany if I'm not mistaken. But that awful movie was so bad and so cheaply made that I couldn't stand watching it and lasted only 15 minutes or so. I had the same thoughts as I did watching Power Rangers, which is like "boy, are those robots dumb looking and the SFX cheap and silly in comparison to RJ". One of the robots from Robot Wars is a redressed robot from Crash and Burn

Then when I was 11 or 12 I tried again after school alone when they hired some woman, so she didn't know I was told 'no' before. And...I got it! I couldn't believe it, it was my holy grail,, my forbidden fruit. I still had a couple of hours alone at home since my parents were at work, so I rushed home. And then a great disappointment came over me within 10 seconds into the movie. I saw the title and it was just Crash and Burn, without the Robot Jox 2 in front of it. I realized it really wasn't a sequel to RJ. 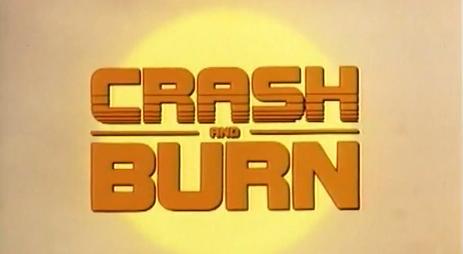 But then again strangely it contained the RJ opening theme, even though it had a different composer. It was also set in the desert-ish post apocalyptic future and there were occasional music cues from RJ, although the soundtrack was completely different and of a completely different feel. The movie was directed by Charles Band who was RJ's producer, and also, "crash and burn" is the saying with which the Jox used to greet each other. It borders between horror and techno thriller and it's actually a pretty good C movie. Yes, I said C because it's obviously very low budget straight-to-video release. In a nutshell, it's a mix between Blade Runner and The Thing, and it contains plenty of nudity, sex scenes and sickening gore, like infected hand and ripping of an arm 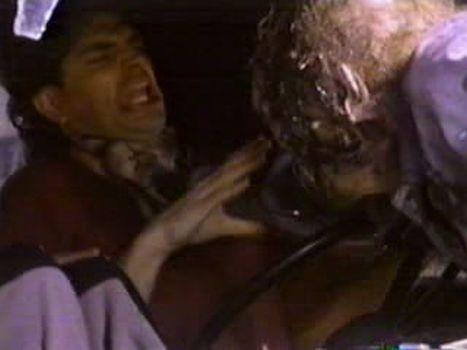 In this story, a group of people gets stranded in the middle of a giant thermal storm in an old plant/TV station in the middle of nowhere, and one of them gets murdered. It soon appears that one of the people in the group is a synthetic with a virus that allows him to kill people and they do a The Thing-style blood testing since synth blood is darker. The murderer is particularly nasty with a sick sense of humor 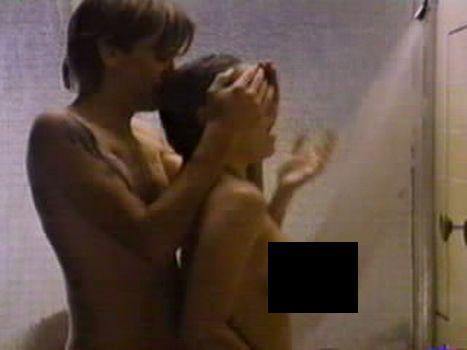 So where does the giant robot fit in you might ask? It's featured by the end of the movie, it gets activated remotely (it's seemingly smaller than the RJ robots and doesn't have cabins to pilot, it's only controlled with keyboard and computer program) to lift a piece of debris that trapped one of the characters and breaks down 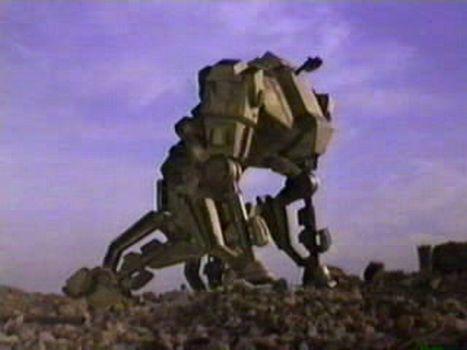 So since it's still titled Robot Jox 2: Crash and Burn in some countries, its as much a sequel to RJ as Troll 2 is to Troll, but still officially a sequel. One way or another, I recommend both movies
7
Login To Vote!
More Articles From Achilles

9
Quote O' Matic
Joseph: "You can't catch him. He's fast as a rabbit."
Added By: agod
The Jacksons: An American Dream
Related Articles