The particular toys/play sets among the highest order in the recollection of my childhood.
By Blake1138
On
Being a product of early 1985, I was poised to enjoy some of the greatest toys ever to grace mankind. True, I missed the golden age of some of the greater 80's collectibles; but thanks to my older brother I was able to enjoy some not-too-shabby hand me downs; IE: Gi Joe, Masters of the Universe, Star Wars etc etc...

Here are a few of my personal favorites from long ago and not-so long ago: 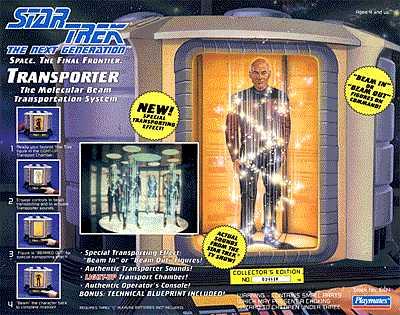 The fact that I haven't seen this listed on any of the "best play sets of all time" blogs is universally criminal. This has to be one of the most clever play sets ever devised. And the broad use of the play set with OTHER figures is nearly infinite. Please take a look at this friendly youtube demonstration.

As you can see, you insert whichever member of your crew you want beamed away, and you do so by pulling/pushing three sliding buttons. You crew member will disappear before your eyes in a flash of light with a nifty sound effect.

The construction and planing of this toy was utterly ingenious. A two-way mirror set at an angle creates the amazing illusion. This toy was literally like owning the coolest self-working magic trick in existence. None of my friends could figure it out until I showed them the blatant truth...and even THEN it's still cool. Quite frankly this toy is smarter than you are. 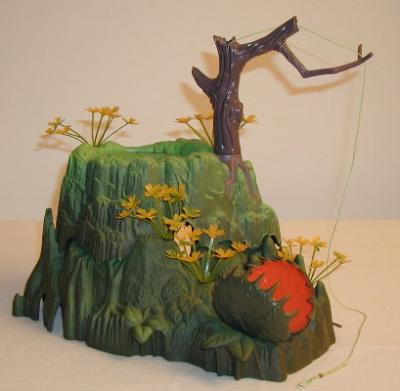 During the early nineties Swamp Thing saw something of a resurgence in popular culture. Being a popular DC comic book decades before and some speck on the map B-movies in the early and late eighties; now finding itself as a popular children's cartoon, (naturally by "popular" I mean not very popular at all. I believe there were less than 10 episodes produced), and a live action television series that found a decent audience.

The aforementioned cartoon series was one of my absolute favorites. I had a VHS tape and every single figure released. Including the radtastic "Swamp Trap". 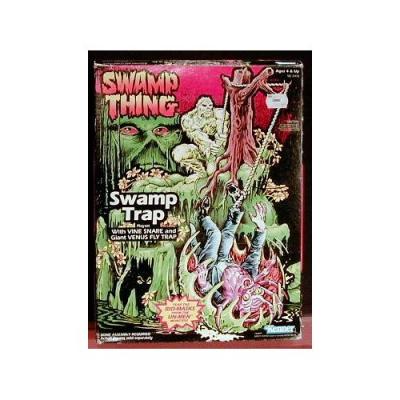 This was in no way as refined as the Transporter play set; but it had some pretty charming characteristics. One of the main things I liked about it as a young boy was the fact that if you took it outside, it looked somewhat realistic set in a natural back drop. Growing up in the country, playing Swamp Thing required one to go out side and find a decent mud hole to have swampy live in. After all, the entire story takes place in the mucky, outdoorsy south. This was true for nearly every single Swamp Thing toy. Even as an overly OCD child, I liked having these toys outside.

Among the few amenities on the Swamp Trap was a plastic venus fly trap attached to scissor. So you could ensnare whatever villain you saw fit. Also you had a small elevator that would push your figure from the inside of the trap to the outside through a foam canopy. Seemingly emerging from the swampy innards. Again, like the transporter, this play set had amazing potential to house any number of various action figures. It was a great outdoor/indoor play set. 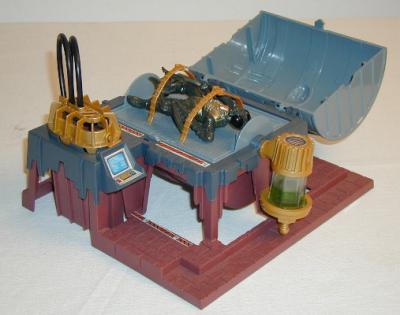 I almost dedicated the above spot to the Transducer play set. Like the show, you would put your figure inside and turn the canister of green goo. Once you re-opened the transducer your figure would have "morphed" into something else! It was literally just a turning table which you could secure a figure on either side. But the imagination is strong. And I loved it. 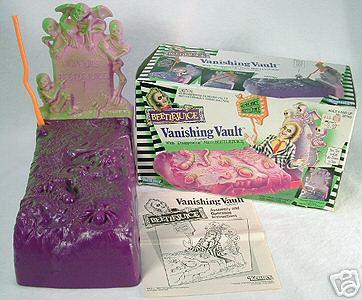 The premise of this was that you could open it up, (like a drawer), and put your favorite Beetlejuice figure inside. When you closed and then reopened the grave he would be gone!(Presumably whisked away to Saturn). There was a double layered drawer inside that would allow you to conceal your figure after you moved the "Here lies Beetlejuice" sign to the right or left. Not devastatingly ingenious, but clever enough to enjoy some vanishing ghost-with-the-most action. Much in the vein of the transducer detailed above.
Side Note: The action figure line produced from this film was pretty impressive. Lots of morbidly creative and interesting figures with fun actions/ accessories. They came for your daughter Chuck. 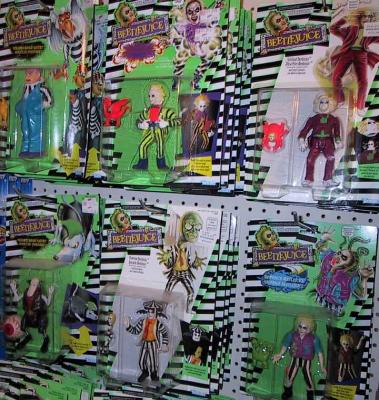 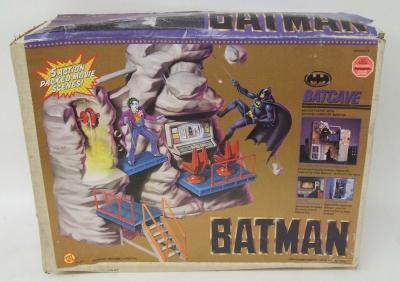 People, this play set changed my life. We all have that "friend of the family" that spoils you as a child; much to the chagrin of your parents who could only justify Christmas or a birthday as a reason to dump upwards of 40 bucks on a giant piece of grey plastic. This is how I got my Batcave. On a whim, in a mall when it was neither Christmas or my Birthday. Thanks Kathy. I haven't forgotten you.

The play set was fantastic. It was a modified rock face,( like in the film), with a rotating computer face, a tumbling boulder, a hole with a rope going down and chairs that your figure couldn't possibly sit in...and that was just the front! Once you turned this megalithic beast around you were granted with a strange cardboard representation of what can only be described as a sewer facsimile. Lots of oozing pipes and doorways. One of which led to the aforementioned well. The mileage you go out of this thing was incomparable. It could substitute for any number of awesome "rock" locations for any breed of figure. 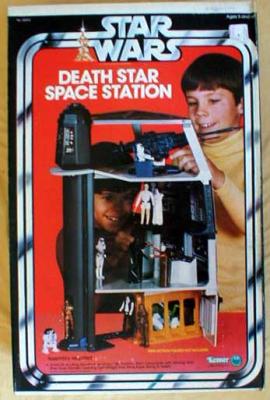 This is probably the most recognizable and over-used item in the "amazing play set" blog sphere. But it stands to reason that there is just no way NOT to mention it.

I was not lucky enough to have one of these when they were new. I had to play with one that was pretty beaten up and the stickers were all peeled off. HOWEVER, the trash compactor still worked and the gun turret was still there. 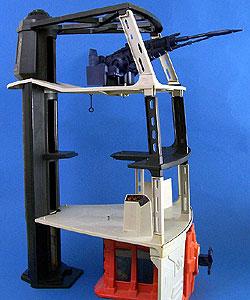 This guy had everything! Multiple levels, an elevator, a huge gun, a trash compactor, a chasm you could swing over, everything.

Nothing more really needs to be said. You all know this is cool, you all remember it, (I hope). It's in the top 10 best of all time. 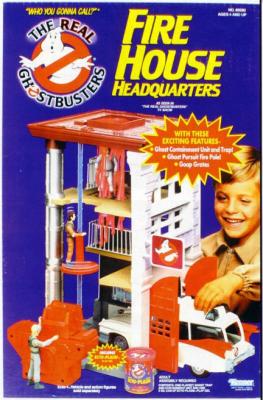 Another in the "of course" category. This was one of the seminal play sets of my childhood; Ghostbusters having been my first real obsession as a child. I had everything. And I will never forget getting in the car after the babysitter and seeing the seemingly 9 foot box in the backseat. 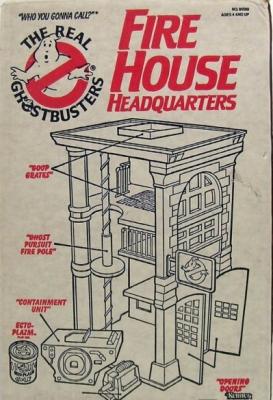 You could park your Ecto 1, (or Ecto 2 or 3), in the thing; it had a spinning elevator and perhaps my favorite feature: skylights, (AKA: goop grates),that you could place slime on and watch it ooze to the floors below. AWESOME. This was one toy that never was cross-bred with any other figures. Only Ghostbuster toys were allowed in this one. To this day when I look at this I always feel like that little kid seeing it for the first time in the old station wagon's back seat.

26
Quote O' Matic
Frank Drebin: "Protecting the Queen's safety is a task that is gladly accepted by Police Squad. No matter how silly the idea of having a queen might be to us, as Americans we must be gracious and considerate hosts."
The Naked Gun: From the Files of Police Squad!