But Thou Must! the 2nd

Dragon Warrior II: The continuing adventures of the descendants of that guy.
By ImAllTheRage
On 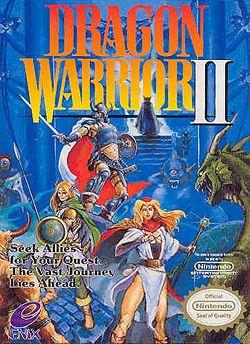 When we last visited the kingdom of Alefgard, we had rescued the Princess Gwaelin from the murky depths of the Swamp Cave and laid a good ol' Descendant of Erdrick style beatdown on the Dragonlord himself. The Ball of Light was restored, the monsters retreated back to the shadows, and Princess Gwaelin had forced herself upon our hero, proclaiming that he had no choice but to love her and allow her to accompany him on his adventures. So, arm in reluctant arm, the princess and the warrior strolled out of Tantagel Castle with hopes of crossing the ocean and starting their own kingdom in the savage plains of Torland. In time, a prosperous nation rose from the dirt and a booming shipping trade opened up between Torland and Alefgard. The Descendant of Erdrick and Princess Gwaelin would have three children during this time: two sons and a daughter.

Eventually, the hero and the princess passed on. Torland was divided up into three kingdoms, and each was given to their children. The eldest son was given the kingdom of Midenhall. To the daughter, the kingdom of Moonbrooke. And the youngest son was bequethed with the kingdom of Cannock. Under their rule, the lands prospered for another century. But, living in a peaceful kingdom wouldn't make for a very good game so, 100 years after the deaths of Gwaelin and the original Dragon Warrior, the devil strikes again. 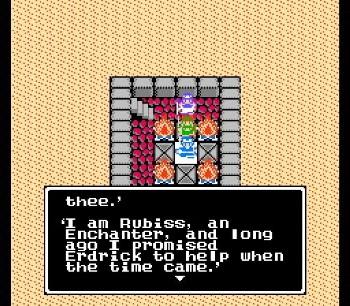 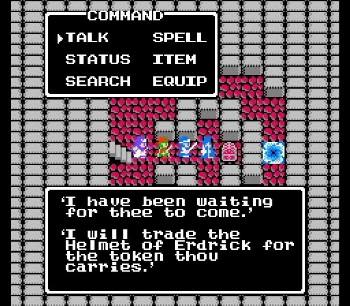 And here, brave fighter, is where we begin our story. In the dead of night, the vile forces of the wizard Hargon assault the kingdom of Moonbrooke and destroy it. The king is killed, the princess vanishes, and a lone royal guard escapes to Midenhall to tell his tale. After telling his story to the king, the soldier dies. After a few moments of mourning the Prince of Midenhall is summoned to the royal court by his father. Looking him in the eye, his father tells him the tale of Erdrick and the Dragon Warrior, and informs him that because he happens to be distantly related to these people it is his destiny to save the world from a villain even more powerful than the Dragonlord. He won't be alone, however. He has two cousins, also descendants of Erdrick: the Prince of Cannock, a weakling who spends all of his time studying healing magic and spear-fighting, and the lost Princess of Moonbrooke, a powerful wizard and quite possibly the best character in the game (all character names, except for the Prince of Midenhall, whom you name, are randomized). Along the way, the adventuring heirs will visit the haunted ruins of Moonbrooke, travel through a very condensed version of Alefgard, and exchange witty banter with the Dragonlord's grandson. They'll also sail a ship, go deep sea diving, and play the lottery. 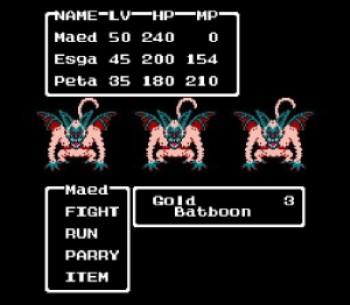 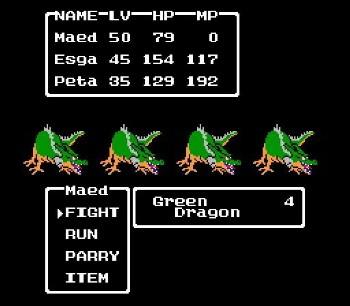 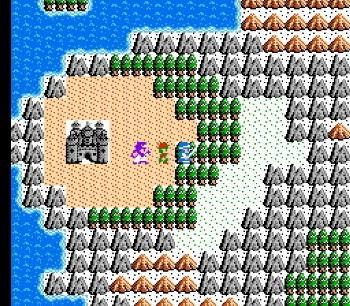 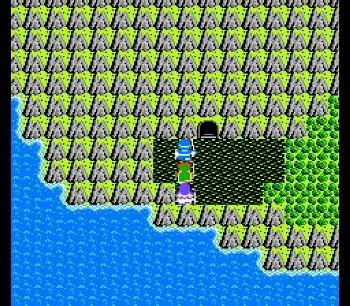 Dragon Warrior II also had a world map roughly twice the size of the old Alefgard map. In fact, Alefgard is one of the smallest land masses on the new world map. Don't be expecting to revisit the delapidated wreckage of Hauksness or the magical scholars of Rimuldar, however. Only three landmarks exist in the new Alefgard: Tantagel, Gwaelin's Cave, and Charlock. If you've played the original Dragon Warrior, you know what a nightmare Charlock was, even at the max level of 30. The new Charlock isn't much easier, but thankfully all dungeons in DWII are auto-lit, so no more torches or radiant spells. Oh, and at the bottom of Charlock, you'll see an extremely familiar bad haircut.

Like all good RPGs, this one has its share of senseless filler to make the game longer. The lottery minigame first made an appearance in Dragon Warrior II. At some shops, randomly, whenever you bought an item, the shopkeeper would give you a free lottery ticket. In several towns, there were lottery stations in which you could trade in your ticket for the chance to win a nifty prize. The lottery played much like a slot machine: match three symbols, win a prize. There was no "element of chance" to the lottery, however. The outcome is preset when you trade in the ticket, so the game has already decided whether you win or lose. 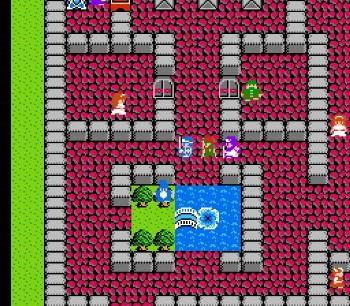 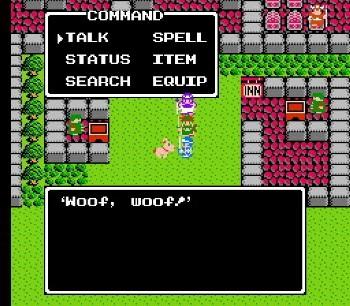 Another thing of note is the simplified command system. You no longer have to select "STAIRS" from a menu to descend a flight of steps. Now you just stand on top of them and viola you're on the next floor. The spells have better names, too. Gone are "Hurt" and "Hurtmore". We now have awe-inspiring magicks such as "Blaze" and "Blazemore". There are more spells, and each character (except the Prince of Midenhall) has a spell set directly tailored to their character. There are more enemies, more towns, more boss fights and adventures... there's just more of everything in Dragon Warrior II. While not my favorite of the series, it still ranks high enough for me to consider it one of the best classic RPGs of all time.

In the end, this game wasn't as well received as the other three. The first wa a pioneer, the third was a micro-manager's masterpiece, and the fourth had a story and gameplay that some have compared to Final Fantasy III. Dragon Warrior II is just simple fun. It doesn't improve dramatically over the original, but it does flesh out the world and add a new level of depth to the creatures that inhabit it. 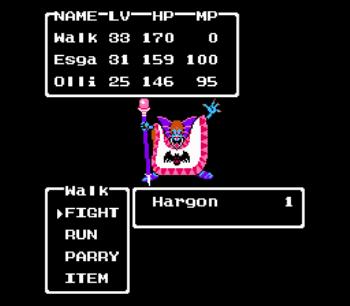 20
ImAllTheRage
But Thou Must!
Dragon Warrior, Or How I Learned To Stop Worrying And Love The Slime.

3
Quote O' Matic
Nora: "I'll be your candle on the water, this flame inside of me will burn keep holding on you'll make it... -Nora"
Added By: System
Pete's Dragon
An unhandled error has occurred. Reload Dismiss