The B&W and technicolor cartoons goes redrawn in the 1970's.
By Clint_Olson
On
During the 1960's, when B&W cartoons were beginning to have little or no commercial value (or so they think), Warner Brothers and NTA decided to commission Fred Ladd's company Color Systems to redraw their respective B&W cartoons (Porky Pig and Betty Boop) in color. The results may have been impressive at that time, but nowadays (especially in the computer-colourising age which can give much better results in colourising cartoons) one can be appalled by the poor technical quality in the redrawn animation (not every frame is traced, momentary missing limbs etc.), psychedelic color scheme, and poor film stock. 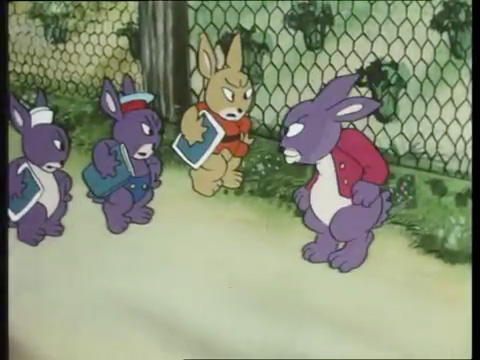 ...into this!
Of course, we all moan about these redrawns, and we hardcore animation fans prefer to see these cartoons as originally intended. But the sad truth is, these redrawns still kept the spirit of the originals in the public consciousness, and has enabled many fans to seek out the originals, resulting in a big demand to see them on DVD and other media. You could say that the redrawing process was a necessary evil at that time.
There were other companies that commissioned redrawns later on. Turner, in 1986, invited Entecolor Technologies (formerly Color Systems) to redraw their B&W Popeye and Merrie Melodies cartoons, which was a rather strange decision as they were starting to colorize their feature films using a computer process. While the technical quality and color palette was somewhat better than the redrawn Porky's and Betty's, plenty of mistakes were still made.
But perhaps the worst-looking redrawns of them all were commissioned by Radio & Television Packagers (who I shall refer to as R&TVP). They gave Color Systems a batch of (presumably) home-movie prints of (mostly) public-domain cartoons during the early 70's. Unfortunately, what R&TVP didn't know is that many of the cartoons do exist in their original colour! Also, they failed to realize that some of them were silent versions of sound cartoons (they will later add corny music to those redrawns). On one cartoon, they had the ending redrawn to something completely different!!! The result is a series of redrawns that are sooooooooo bad, they are actually quite entertaining in their own unique way.
Here is a complete list of the 43 R&TVP cartoons, as compiled by Richard Jebe and Pietro Shakarian:

Unidentified:
"They Shall Not Pass" – Mutt and Jeff
"Double Performance" - Unknown

In these series of posts (yes, I'll be making some R&TVP articles, so be warned - lol ;3),I shall be posting specially-selected redrawns, along (where possible) with their originals for comparison.
And to start off with, here's a redrawn version of Felix Misses His Swiss, starring the title character as a burgundy-colored cat!. Unfortunately, I don't have the original to upload, but according to David Gerstein, the final scenes were missing from the original source print, so you will see a fake (clover-shaped???) iris-out before it reaches a satisfying conclusion.

Did the re-tracers really believe that Felix was grabbing his gonads at the beginning of the cartoon (lol)?
For this series, as these will mostly be public-domain cartoons, I've decided to abandon imposing a time-limit on their availability. ^-^
-2
Login To Vote!
Comments
An unhandled error has occurred. Reload Dismiss