Underappreciated toys of my youth
By Hoju_Koolander
On
Greetings fellow Retrojunkers, I have taken a brief hiatus from the land of no-budget movie making (see my profile for more info on those endeavors) to reminisce once again with all y'all. Today I'm going to talk about some toys from my youth that I rarely see mentioned on the site. Maybe they're in there somewhere wedged between the movie and video game list articles, but if so I have yet to see them. 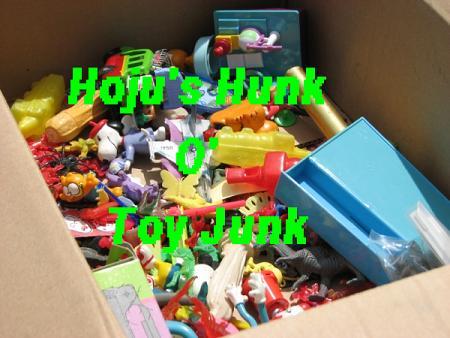 First up on Hoju's Hunk O' Toy Junk, allow me to introduce you to the stress reliever for the youth of yesteryear, The Bop Bag! 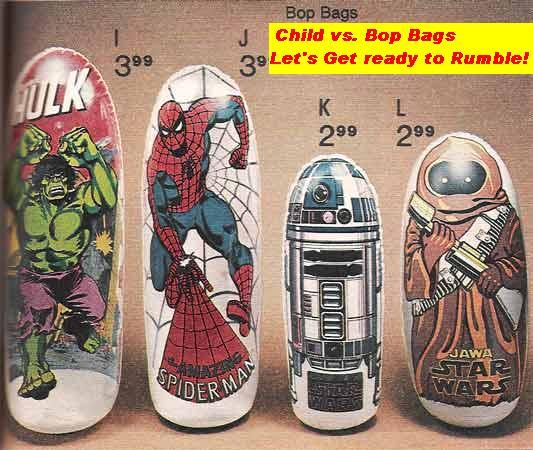 Essentially a large, inflatable bowling pin with sand in the bottom, these things provided hours of entertainment, because no matter how many times you hit them they always came back for more! Adorned with pictures of your favorite cartoon characters you could finally get revenge for all the hours of recycled plot line and crappy animation that was slowly rotting your brain. And let's face it, you were only watching them for the violence anyway, am I right? 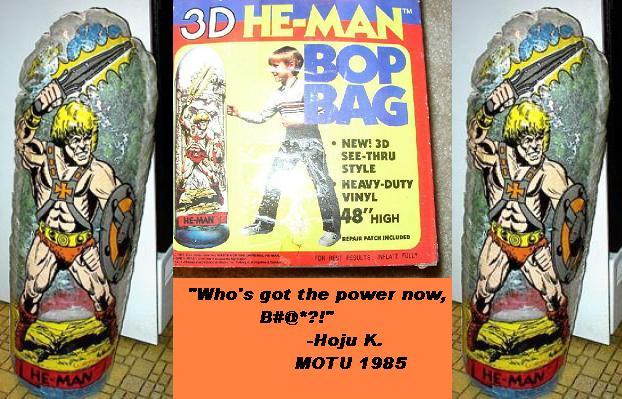 I personally owned the He-Man bag featured here and boy did I lay the smack down on Prince Adam's furry speedo wearing alter-ego. The classic punch to the gut, "Take that Goldielocks!" followed by a swift karate kick to the face "Not so pretty now are ya?!" and of course the flying tackle "Who's got the power now, B#@*!". I may not have had the power of Grayskull on my side, but I can safely say that Teela knew exactly who was the real Prince of Eternia after I flattened her hunky boy toy on a weekly basis. When I wasn't drawing blood from my toys, I was drawing pictures. There were several mediums I worked in, the first being the Magic Slate. 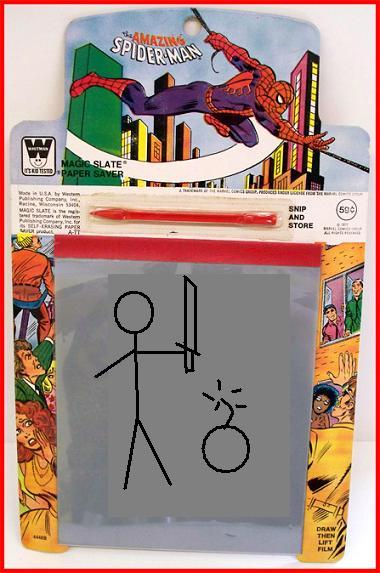 Consisting of a colorful cardboard backing with a layer of mystery black material covered by a thin plastic sheet, this portable easel allowed kids to quickly discard their terrible drawings and start over without depleting the nation's supply of trees. The little plastic pointer pen would glide along the surface of the gray plastic and slowly create the shape of a stick figure holding a gun or a sword or a grenade (Yeah, grenades are awesome!) Simple enough, but what did you expect from something my Mom used to buy just to keep me quiet in the store while she went shopping. When we got home, though, then the real masterpieces were created using the one, the only Etch-A Sketch! 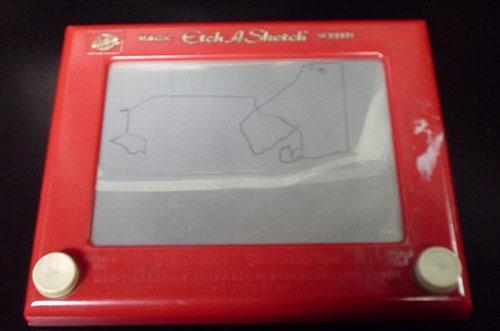 Yep, there it is. A work for the ages. Some kind of bird holding an unbent wire hanger in its mouth with a featureless mouse dangling from it. Yeah, I never really got the hang of the vertical and horizontal knob thing. Frankly it was more fun just making a bunch of squiggly lines to cover the screen then shaking them all away like I was destroying an ant farm. But luckily the people at Ohio Art had me covered, as they released Etch-A-Sketch Action Packs! 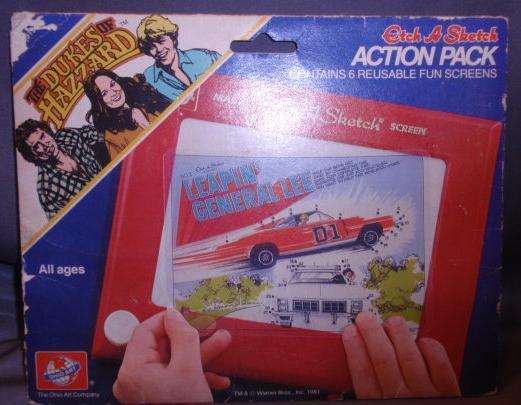 Yee-haw! I loved my Dukes of Hazzard action pack overlays. I still remember going to the store and begging my Mom to buy it for me, since I always watched a Dukes of Hazzard rerun before we went to church on Sundays. There were all sorts of Hazzard County activities, like connect the dots to create the General Lee and mazes to solve as Bo & Luke tried to get passed Boss Hogg's fat behind. Most of all it brought color to whole Etch-A-Sketch affair, which is just what this particular toy had been needing for all those years. But when I'd had my fill of making my own pictures, I turned to the magical device that displayed colorful adventures for me, The View-Master Show Beam! 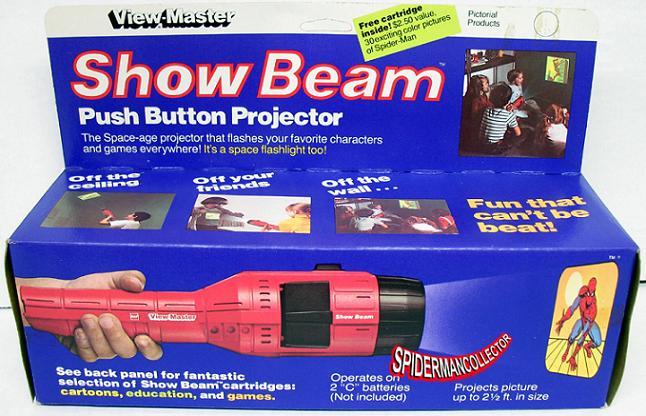 Man, oh, man was this thing ever sweet. It was like holding an electronic torch that produced images at your command. You just popped in the cartridge featuring your favorite characters and pushed the big black button to move the slides. To my young mind the cartridges were like pre-shot rolls of film and seeing as how I was too young to have a camera it was real treat.

I usually used the door of our darkened bathroom to project the images of Spider-Man or the Super Friends. Sometimes if I got up early and it was still dark I would leave the lights off and flash the beam on the living room wall. What was extra cool was that you could adjust the size of the image and focus it so you felt like you were fine tuning an advanced piece of technology. Even years after the lighting mechanisms broke, I kept the useless shell of my Show Beam around to use as a prop in play fights with my buddies.

When I got a little older and moved on to Ghostbusters fandom I had the Ghost Projector, which worked on a similar principle except that it displayed pictures of different creepy critters and made zapping noises. I still regard the Show Beam as the true classic, although there is one final piece of toy technology that edges it out as the ultimate in my book. Retrojunkers and Retrojunkettes, I give you the Fisher-Price Cartoon Viewer. 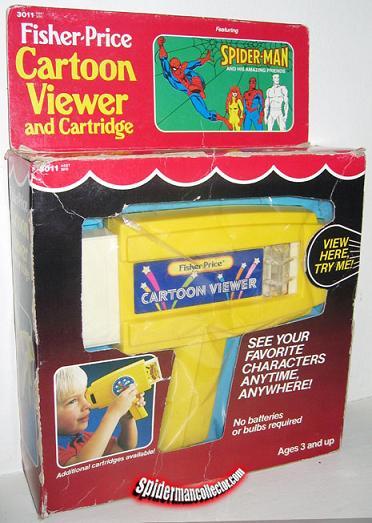 Just look at this thing, it's got everything a kid needs. Colorful graphics? Check. Noisemaking crank wheel? You betcha. A gun-like handle for added play value? Heck yeah! Basically a portable cartoon kaleidoscope, the Cartoon Viewer not only showed you the images of your favorite animated characters, but brought them to life in real time! Basically you just inserted the cartoon cartridge/tape and cranked the wheel on the side to move the images, just like a movie projector. 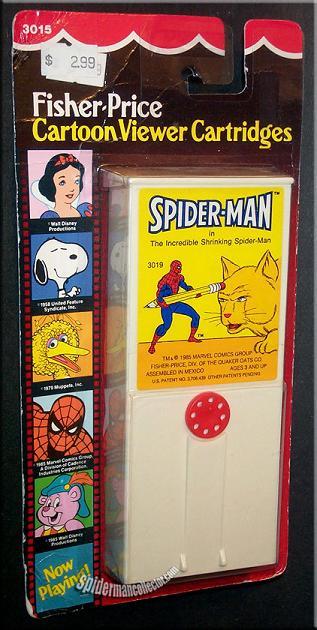 I had cartridge/tape of "The Incredible Shrinking Spider-Man" and it brought me many afternoons of enjoyment. I can still remember the tubby guy dressed in grey-purple spandex wearing a welding mask with long red hair trailing out the sides blasting Spider-Man with what looked like a wind-gun but in fact was a shrink ray. I must have watched it a hundred times. 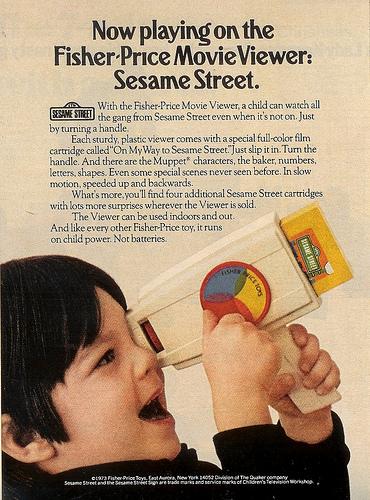 Sure there wasn't any sound, but the visuals were strong enough to get the story across. Plus the added bonus of being able to play it all in reverse was way fun. Making Spider-Man shrink, then grow, shrink then grow, then do it all again in slow motion. Oh, the joys of youth.
So there you have it, Hoju's Hunk O' Toy Junk. Hopefully this article will bring some of my old contributing compatriots like Cosgrove and vkimo out of the woodwork. Seems like ages since we've had one of their epic articles. But truth be told, I enjoy reading every non-anime/Pokemon related article here on the site (sorry, Pikachu) and look forward to the retro-future...hm, that doesn't quite work does it?


Special thanks to spidermancollector.com for some of the pics, an awesome site everybody should check out.
36
Login To Vote!
More Articles From Hoju_Koolander

22
Quote O' Matic
Brad Pitt: "This sure is the pits! -Brad Pitt"
Added By: System
Freakazoid!
An unhandled error has occurred. Reload Dismiss