In the mouth of maddness

Lived any good books latley!
By dg
On 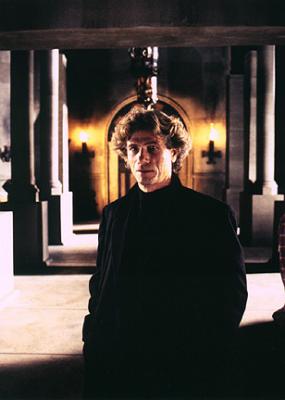 "Do you read Sutter Cane"

Directed by John Carpenter and has to be one of the best horror film he's ever done in my opinion.This film is great starring Sam Neill, Julie Carmen playing Linda Styles and Jürgen Prochnow who is great in this film and Charlton Heston. A film probably not remembered but its entertaining as hell.Its got everything a horror fan could want monsters,people getting chopped up and zombie like people. 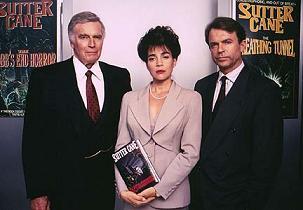 Made in 1995 which is a good thing because its more of a horror than all these thriller type films they do today which call themselves horror.The film is like a tribute to horror films in general because they've been done so many times but it has great humour and the film doesn't take its self to series which is a good thing considering the story.It begins with Sam Neil playing John Trent being taken into a mental hospital after killing a fan of a popular horror book called In the mouth of madness.He's then asked questions on his actions by David Warner.When you see him he is covered with crucifixes used by a pen and his whole cell is covered which is spooky. Then he begins to tell the story. 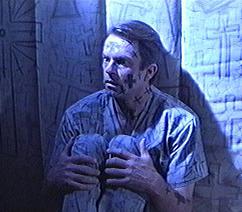 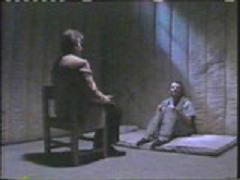 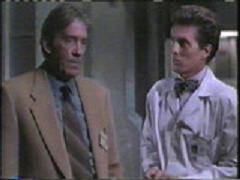 An insurance investigator looks into the successful horror books written by Sutter cane.Its drives the fans mad and they end up killing people and chopping them up with axes.He is convinced that its all a load of rubbish and a publicity stunt.He then picks up a couple of books written by Sutter cane and confronted by weird looking teenager and says "he watches you" which is really freaky and makes you wonder what he is going on about.When he starts to read the books is starts getting more, and more into them and starts to have horrible illsusanations with people getting chopped up and beaten by a zombie looking cop. 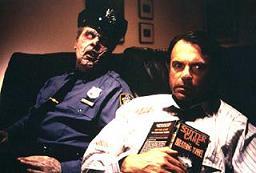 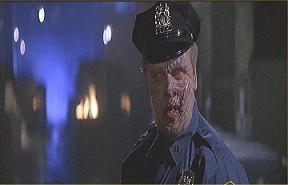 He's then nearly killed by a maniac with an axe in a coffee shop which spooks him out being asked "do you read Sutter cane" Sam Neil replies "yes" and the maniac nearly makes him into chop sewey before a cop guns him down. 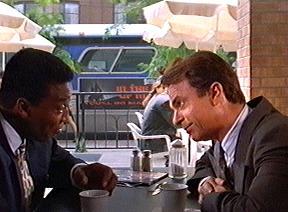 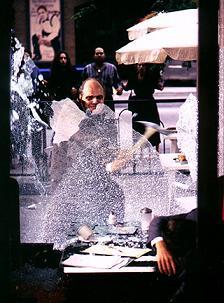 When he speaks to his manger Charlton Heston he is told to track down the disappearance of the writer Sutter Cain, he asks why and you find that the lawyer had lost contact with him over a month ago then you find out the crazed maniac with the axe is Sutter canes lawyer.
After doing a bit of research he finds that the book covers hold the path to the unknown where abouts of Sutter cane, called Hobb's End.
So the journey begins with Styles and Trent travel to Hobb's End in a car.Things don't go quite to plan as they are being haunted by Sutter canes world the nearer they get to Hob's End with a boy that is trapped riding a bike that looks like an old man.His bike has a card taped to his bikes wheel giving it an eerie effect saying he wont let me escape,so you got think that Sutter cane is a nasty piece of work. 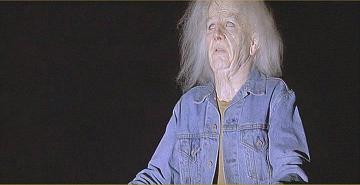 Eventually the nightmare comes to a halt and they reach the Hobbs End to find that's its deserted with freaky looking children running around.They mange to book into to a hotel with a suspicious looking old women.They then mange to work out the where abouts of Sutter canes haunted church which protected by Sutter canes guard dogs which look pretty scary. 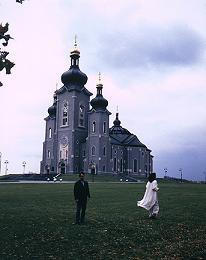 Then they see men come in cars with big guns demanding that Sutter canes releases one of the men's son and cane makes his appearance for the first time looking pretty cocky but cool showing that he is in control using his power to open and close the door repeatdly.Cane then calls his dogs to take care of the men some escape and styles and Trent split straight back to the hotel.Styles tells Trent its all real but he doesn't want to believe any of what he saw and as things become more and more weirder they see a painting which changes and styles is the only one that notices it.She then becomes in control of her self and becomes interested in seeing where cane is and drives out to meet him.She then sees kids that look really freaky telling her that she there mummy she then goes into the church and meets cane,makes out with him only to see he is a creature himself. 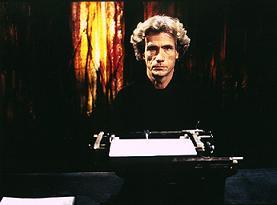 While all this is going on Trent becomes aware of all the supernatural changes and notices that the painting did change.He then hears the old women's husband screaming in pain so he makes his way into the hotels basement to see the old women a monster chopping him up which was a really gory moment but cool. 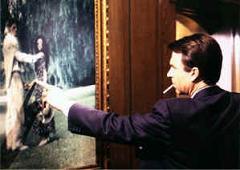 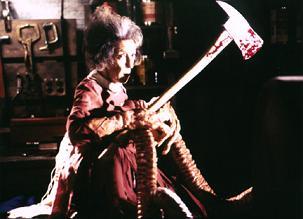 He then then sees styles again but through his door with tentacles trying to get through under the door he is then chucked across the room and heads down the stairs to the car outside and sees another monster in the green house,yes there's loads of cool creatures in this film which makes it great. 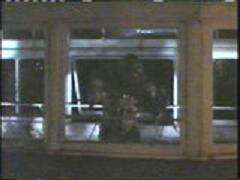 After that he tries to escape Hobbs End and travels towards the city where he sees one of the men that lost his kid.He tells him to get out but still at this point disbelieves him and goes out of his mind trying to escape.He tries to drive through crowds of brainwashed people that look like mutants but ends up where he started again until he crashes and ends up in a church with cane.Then you see cane typing telling Trent he's nearly finished his new book which will drive people mad.
Cane tells him that he is writing every move he makes and he is a character in his new book which gives it a brilliant twist in the story.He then tells him he can only hold the creatures of hell back for so long as they bash through a wooden door. and tears himself away like a paper with styles ending the rest of what cane write with every movement Trent makes looking into the abyss that was a huge wooden door. 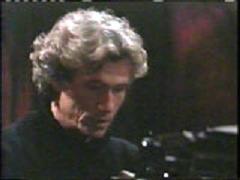 Trent moves back as styles carries on reading when huge monster coming towards him and this is when you see great looking creatures which carpenter creates brilliantly like in the thing.Trent starts to leg it down the corridor with then coming after him and then he ends up back on the road far away from Hobbs End with the finished pages of in the mouth of madness. 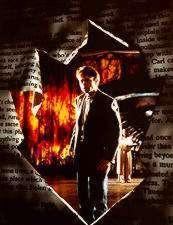 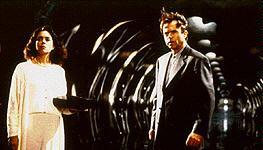 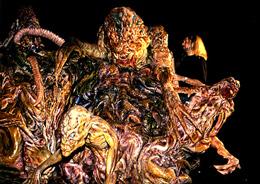 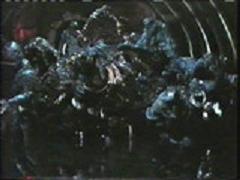 He then burns the pages and travels to a motel where the book tracks him down and he becomes totally paranoid like any one would.Then he travels back to his work building in coach.On the way he is encountered by cane which tells him he will never go away and his book will cause chaos every where, he wasn't wrong.He shows Trent that he writing him and can change the world around him to make him believe him and turns everything blue which quite funny. 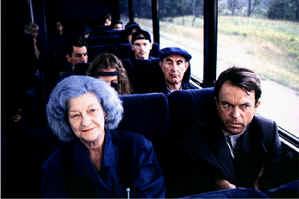 He finally makes it back and talks to Charlton Heston telling him not to publish canes latest book which will drive every one mad but it had already been published a month ago which starts making you think a little what the hell is going on.Trent then takes matters into his own hands and does the same as canes loyer and chops a kid that was reading cane latest book,you know he'd been reading it because his eyes where bleeding from the evil.
You then end up where you started at the beginning of the film and David Warner leaves the cell.You then see chaos and screaming outside with creepy moment a hand wiped across the window and the cell opens.Trent walks outside only to see everything torn apart with the rest of the cells battered and blood every where.He then walks outside the hospital seeing everything falling apart with paper every where and he travels towards the city with screaming coming all around and notices the cinema where In the mouth of madness is showing.He then gets some popcorn to enjoy film like I said its quite funny film and sits back and enjoys watching the movie its elf as he stars to laugh he himself starts to go mad. 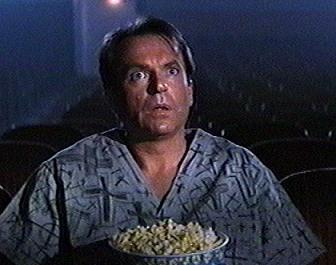 I hope you enjoyed reading through this article on In the mouth of madness it is a really entertaining film and I recommended it to any one.I think that John Carpenter did an amazing job with this film which has to be one of his most stylish film to date.
1
Login To Vote!
More Articles From dg 8
Quote O' Matic
Lion-O: "All out of ammo Safari Joe? Looks like you ran out of courage, too!"
ThunderCats