19 years ago, CBS was to air The Garbage Pail Kids. However, outraged parents groups pulled the plug. Now it's finally available on DVD...
By Owepar
On
It was 1987. Like many boys across the country, I was completely obsessed with those gross Cabbage-Patch inspired trading cards, "The Garbage Pail Kids." Filled with faces that even a mother couldn't love, the cards were inventive, wonderfully weird, mind-numbingly depraved and utterly sick -- so, of course, they were a huge sensation! The next logical step in the huge Garbage Pail empire (which was filled with a variety of merchandise and an underwhelming feature film) was an animated television series. And they made one too... 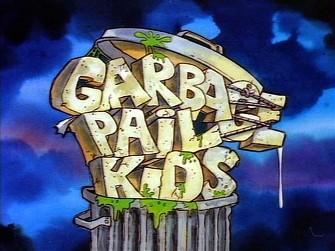 It was sometime over that summer when I first saw a commercial for the series. I was overjoyed that I'd soon be able to see the adventures of those sick kids every Saturday morning, and my enthusiasm grew when I began seeing articles in the local newspaper about parents being outraged over this cartoon (I wish I still had the half-page article with the photo). September rolled around and there, listed in the local TV Guide, was the GPK show. On Saturday morning, I got up early, found a tape and awaited the premiere of my new favorite show. But when it came time to watch GPK, some other show aired in its place (time has dulled my memory of what its replacement actually was). The next Saturday, I got up early and waited for each half hour to pass to check CBS and find my show, which I thought must've surely been on in another timeslot. Nothing. For two months, it remained scheduled in local listings -- and for two months, I became increasingly pissed off and heartbroken that it wasn't playing. Then it vanished from the schedule. Until a decade ago when I decided to look the show up online, I assumed that it was just my local market that didn't air the series. But then I discovered that no station in the USA ever ran it. Tapes of the show have been circulating on the net for eons, but the quality is alleged to suck, and many of the episodes were dubbed into another language. I figured I'd never get the opportunity to see the show that I so desperately wanted to love. But occasionally, time and technology are truly our friends....

With DVD being what it's become, and with many of the kids from my generation now raising kids themselves, someone got the ingenious idea to pull this show out of the vaults and make it available to the masses. The little show that parents got yanked from the air before it aired two decades ago is now officially available at your local Walmart. 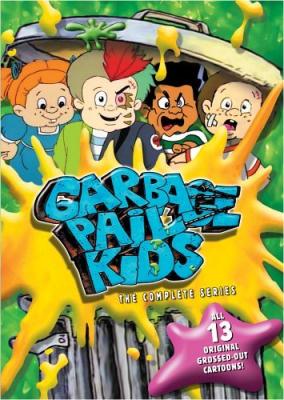 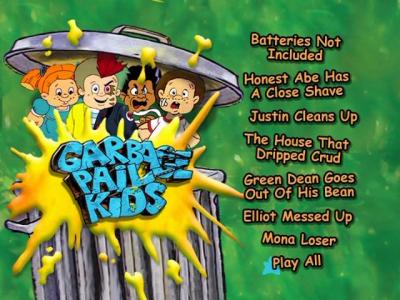 I paid $21 for the two-disc set with some trepidation. After waiting 19 years to see this damned show, I knew it could never live up to my expectations of it. In 1987, I'd expected that it'd be some truly sick masterpiece on par with the cards themselves -- and I figured that's why it was yanked. But as I got older, I knew this would not be the case -- they had to have watered it down for children... and they did. 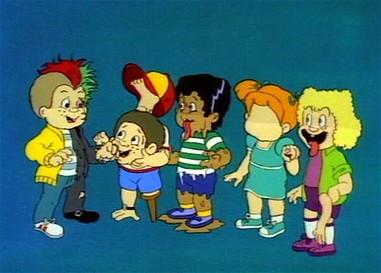 I was pleasantly surprised to find that I actually enjoyed seeing the show. As a fan of the cards, I saw a variety of familiar characters and experienced some totally '80s nostalgia. From a rip-off of Michael Jackson's "Beat It" that plays during the first episode to some overblown valley-girl accents to a spoof of "The Fly" in the final episode (titled "The Fry"), the show's a lot of fun. And the wordless theme song quickly etched itself into my brain. I liked it as an adult, but wish that I hadn't been deprived of seeing it as a kid -- I would've friggin LOVED it.

The show features a variety of skits, but each of the 13 episodes has two basic parts, a movie spoof and a Garbage Pail Kids adventure starring a group of 5 main kids: 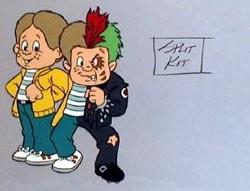 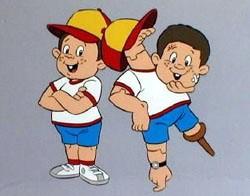 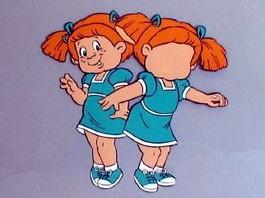 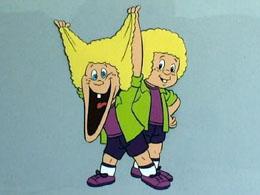 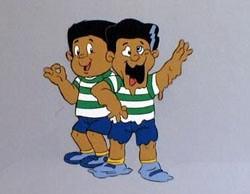 In the first two episodes, these kids start out as normal-looking children, and then they "trash-out" into their alteregos to help out Trash Can Ken. 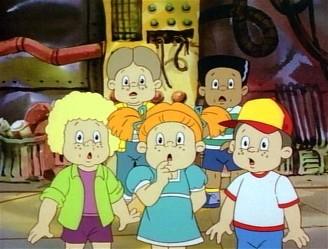 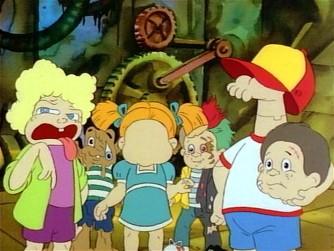 From the third episode, "Justin Cleans Up," onward, the kids no longer have normal personalities -- they're mutated from beginning to end -- and Trash Can Ken no longer appears. I wonder if they did this because they knew it'd never air, or if it was because the normal kids looked far too much like they stepped out of the Cabbage Patch.

Their adventures are positively goofy. In one, they chase a mutant plant to capture him before he eats everything in the town. In another, they go back in time to find out why Leonardo DeSquinty's Mona Loser painting is no longer smiling. They head off to Egypt to return the head of Wrinklin Lincoln to Mount Rushmore. They go through the rainbow to the land of Odd. They pointlessly chase a baby ostrich through the town... Certainly no different than the type of stories that appeared on "It's Punky Brewster" or any of the other cartoons running at the time, but still entertaining and somewhat unique in their trashy outlook. 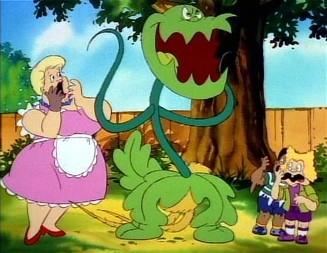 Moving on to the movie spoofs, it would begin with someone emerging from the trash can in front of the theatre and changing the name on the marquee... 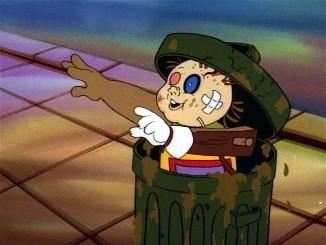 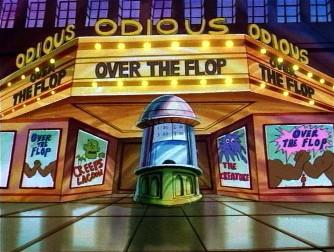 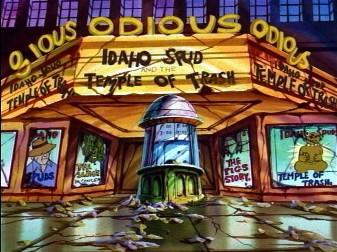 The spoofs range from "Indiana Jones" ("Idaho Spud and the Temple of Trash") to "Jaws" ("Oops, the Disaster Movie"), from "The Pink Panther" ("The Pink Cat's Eye") to "Conan the Barbarian" ("Savage the Barbarian"). These skits are alternately hilarious and droll, but generally inventive, and feature cameos a ton of Garbage Pail Kids (both from the cards and invented for the show). 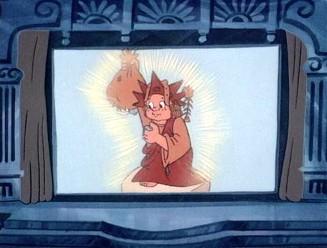 Other segments are mainly short filler and include the "Garbage Pail Groaner," a segment with intentionally bad jokes; commercials for goofy products like a "Cootie Detector" and "Anti-Kissing Cream;" "Would We Lie to You?" (yes, they would) and the obligatory "Garbage Pail Awards."

The show never manages to rise above "cute," but that's part of the appeal. Although it'll never be as fondly remembered as it could've been (a big f'n bird to those damned parents who kept us from seeing it way back when), it's still fun and could potentially expose a whole new generation to those nasty "kids" that many of us grew up with. All in all, it wasn't quite worth the 20 year wait, but it's a great piece of "retro" nostalgia. Thank God for DVD! 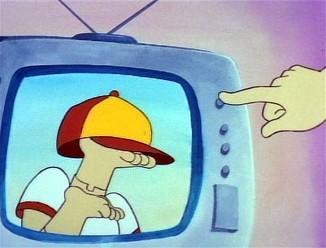 26
vkimo
Diary Of a Yard duty
My Recollections of ChildHood Lore
An unhandled error has occurred. Reload Dismiss