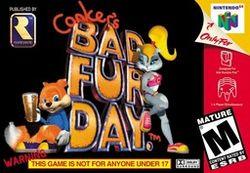 3 - Conker's Bad Fur Day (2001)
Released in 2001, Bad Fur Day was as reeboot of the entire franchise. Conker had previously been established as a children's character in the 1999 Gameboy Color release ''Conker's Pocket Tales''. Prior to that, he had also been a secondary character in ''Diddy Kong Racing''. While those games were geered towards a younger audience, ''Bad Fur Day'' was the subject of much controversy at the time of it's release, mainly because of the fact that Rare (the company behind ''Bad Fur Day'') had taken a character originally ment for children and turned him into the rough equivillent of a South Park character. The game follows Conker the Squirrel as he stays out late one night drinking with his friends, and subsequently stumbles in the wrong direction on his way home. This chain of events leads him to a fairytale world were a series of unfortunate events ensue. Despite receiving good reviews from critics, the game suffered from poor sales (probably due to bad advertising and the fact that by 2001, the N64's race was almost run) . The Conker character appeared once more in a remake of sorts, titled ''Conker: Live and Reloaded''. 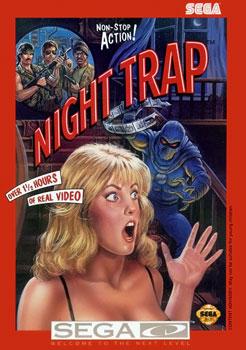 2 - Night Trap (1992)
''Night Trap'', along with ''Mortal Kombat'', is considered the driving force behind the establishment of the ESRB rating system. The game had you playing as a member of the ''Sega Control Attack Team''. Your job is to protect a group of young co-eds from vampiric ''Augers'', creatures who are believed to be responsible for the disappearence of five girls who had previously stayed at the house. Whenever you spot an Auger on one of the home security cams, you press a certain button that activates a nearby trap. Soon after it's release, senators Joe Lieberman and Herbert Kohl dismissed the game as being "Shameful", "Ultra-Violent", and "Sick". One scene in particular sky-rocketed it's controversy to the max. A game over sequence where a woman in a nightgown has the blood sucked clean out of her neck with a draining device. The developers argued that since no nudity or extreme acts of violence were depicted, no harm had been done. An interesting side note is the appearence of now deceased ''Diff'rent Strokes'' star Dana Plato. 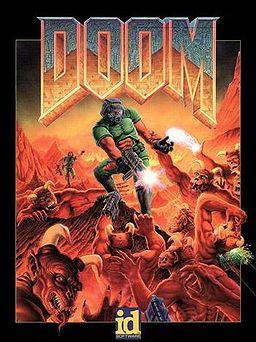 1 - Doom (1993)
The psuedo-sequel to the less controversial ''Wolfenstein 3D'', Doom was shrouded in controversy for some time. Number One for it's satanic imagery and Two for it's ultra-violent themes. It's simple story and gameplay mechanics made it on of the best reviewed games of the early-nineties. It tells the story of a space marine, known only by the name ''Doomguy'', who is sent to Mars as punishment for assaulting his captain. He is assigned to a group of researchers who are expirimenting with the teleportation of soldiers between Mars, Phobos, and Deimos. This unleashes demons from hell that you have to fight off from a first-person perspective. It was subjected to much critisism at the time of it's release, some people going as far as to call it a "Mass Murder Simulator". Over time however, the controversy died down and eventually vanished...until April 20th, 1999 when two Doom fans, Eric Harris and Dylan Klebold, shot and killed over a dozen classmates before turning the guns on themselves. This raised controversy over Rock 'n' Roll music, violent video games, and Goth subculture.
1
Login To Vote!
More Articles From PostalDude96

19
Quote O' Matic
Teacher: "I finally found you what have you been swimming in"
Kid: "He wasn't swimming he was dunking for tard"
Kids: "Laughing"
Teacher: "That's Enough!"
Cop and ½