A Look at the Koolest Greaser of all Time!
By DrivingReport
On
Throughout Television History there have been many television Icons! Of course one of the most popular Television Icons is Arthur 'The Fonz' Fonzerelli. If you don't know who he is you have either been A) Been living under a rock for the last three decades or B) Born in the 80's or Up! Either way, most people will agree that 'The Fonz' was, and still is, the most influencial, and coolest TV character of all times!

Of course, The Fonz, Played by Henry Winkler, is a Character from the ever popular sitcom 'Happy Days' 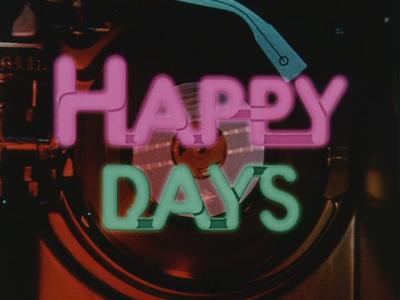 'Happy Days' premiered January 1974 and ended September 1984 (10 Years, can you believe it?) It's run was made of eleven seasons of fun, laughter, and of course, plenty of the fonz! Of course, the Fonz, wasn't always the primary focus. Orginally it was Richie Cunningham and his pals, Potsie Webber, and Ralph Malph who were the primary characters. Back in 1974 the Fonz wasn't a big character. He was merely a stand-in. 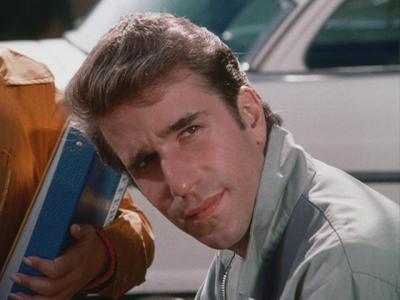 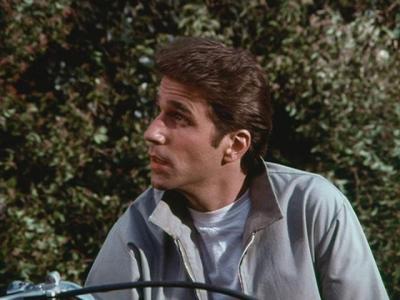 "You Played with her Breasts?!"

The Fonz himself was born 1937 (He was listed as 19 in the first season). However his early childhood wasn't easy. His father took off when he was only twelve years old. 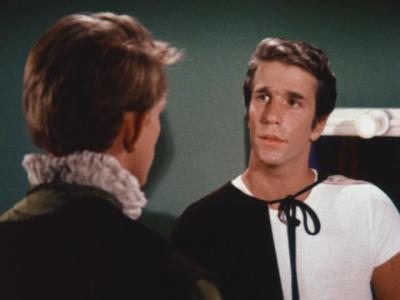 When Fonzie's Father left, he left Fonzie a box that Fonzie ran over with his tricicle over and over to open, and when he finally sprung the lock, in the box was the Key. Fonzie revealed this in the episode 'Howard's 45th Fiasco' from Season 3. This which during lecture to Mr. Cunningham (Richie's Dad) after Mr. C had threatened to run away to Tahiti and leave his family because he felt his life was boring at 45. Of course Fonzie fixed all this by showing Mr. C he is needed in the house and is important to the household. 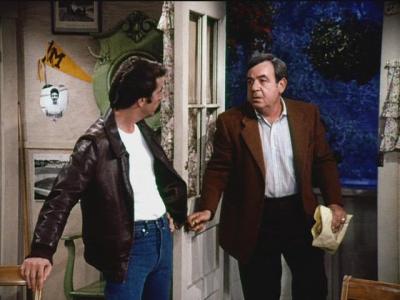 In addition to Fonzie's Father Leaving, Fonzie's mother left. Because of all this Fonzie considered commiting Suicide. He told this to Richie when questioning one of the Shakespere lines from the Play 'Hamlet' of which Fonzie once played the title character in the episode 'A Star is Bored'. The line he questioned was "To be or not to be". 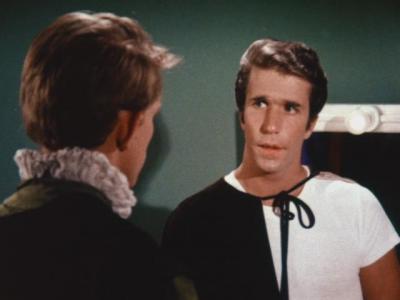 This revelation led Fonzie to his first ever 'Fonzie-Speech'. In it he told the audience of the play to "Dig what you have now, because your not going to have it forever". This speech occured in the same episode as the above. 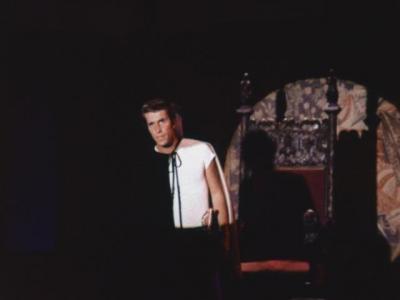 However, Fonzie's Friendship with Seventeen Year Old Richie Cunningham played a huge role in Fonzie's life as well. He first met Richie at some point. It's hard to determine when. At first Fonzie was a member of the 'Falcon's Gang'. One time he walked up to the table where Richie, Ralph, and Potsie were sitting and threatened them. Fonzie himself, challenged Richie to a fight in an alley that night. Richie went and because he didn't back out, as Fonzie expected, and because he convinced that being in a gang was stupid, Fonzie gained respect for Richie and their friendship began. This plot was part of the episode 'Our Gang' from Season 5. 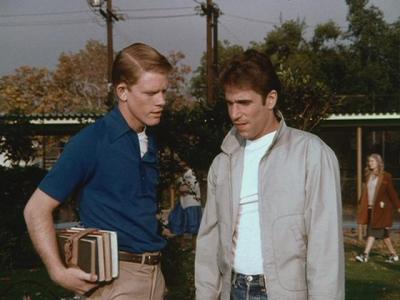 Fonzie was also a High School Dropout. However, he managed to make a living as a Mechanic at Herb's Auto Repair Shop. However, because of his friendship with Richie other parts of his life began to fix themselves up as well. For Example, in Season 2, Fonzie joined the Cunninghams for Christmas for the episode 'Guess Who's Coming to Christmas'. 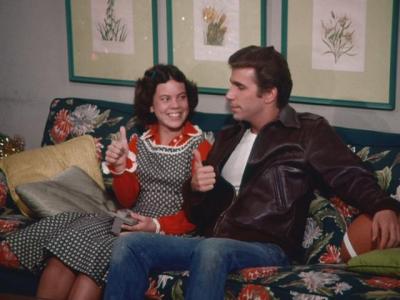 Fonzie and Joanie give eachother the Thumbs-Up, Fonzie's Signiture of Approval, in the episode 'Guess Who's Coming to Christmas' from season 2.

Fonzie also had his own simple way of praying which he showed also in the episode 'Guess Who's Coming to Christmas' as he looked up to the ceiling and said: "God...Thanks". 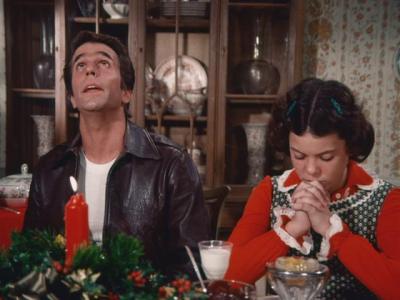 By Season 3 of Happy Days Fonzie moved into the Cunningham's house in the Garage, that assumingly used to be Chuck, Richie's former older brother's room.
He moved in because he wanted to find a place of his own after living with his Grandmother for a time. As it turned out Mr. C had made a request for a garage renter in order to get rent which Mr. C needed due to low business at his hardware store. As it is known, Fonzie became the renter and from that point on lived with the Cunninghams. 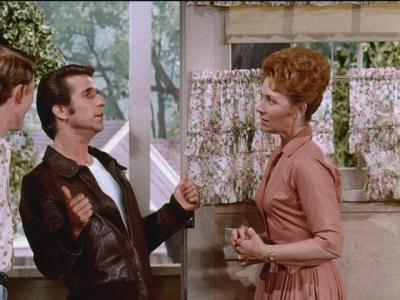 And so it was the Fonzie began to drastically change. For example, he started trying a bit less hard to be 'Cool'. This occured in the Episode 'Fearless Fonzirelli' a two parter from Season 3. In it Fonzie jumped over twelve trash cans as way of trying to be cool again, as he felt he was loosing his cool, but he crashed into a chicken stand that Arnold, the owner of the hamburger join where the teens hanged out, had set up. He had injured his knee but hopped back in and then told the cameras who were filming the event for a tv show called 'you wanted to see it' that "You don't have to jump over cans to prove you're cool". A Good message to those who attempt to be cool by doing more dangerous things such as : Drinking and Driving and Drugs. 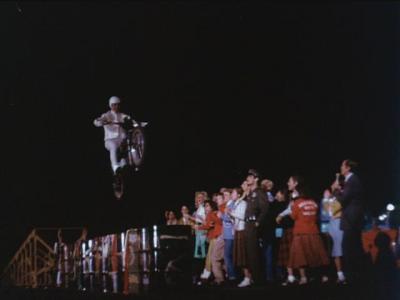 But one thing that never changed for 'The Fonz' was his ability to make audiences laugh. This was true of course in the episode 'Dance Contest' from Season 3 when he made the enraged speech about wanting to go through a Dance Contest with Mrs. Cunningham. The speech ended with the line "The Fonz want's to Dance!!" 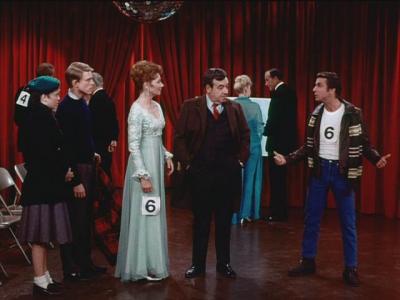 As the Years pushed on Fonzie continued to show a lot more of his character. He eventually Graduated High School along with Richie, Potsie and Ralph in Season 4. He showed a lot more emotion as well, as he cried as he was begging God to let Richie live after Richie was in a coma after being in a bad motorbike accident in the memorable episode 'Richie Almost Dies' from Season 5.

Fonzie also discovered a little more of his family after meeting his step-brother Artie in 'Arthur, Arthur' from Season 11. Artie was the birthchild of both him and Fonzie's father "Vito Fonzerelli" and his own mother. Artie had come to tell Fonzie that their father was dead. At first Fonzie hated Artie but eventually by the end of the episode accepted him as his brother. 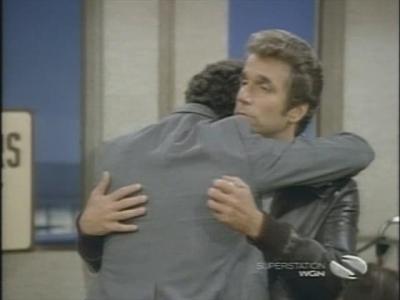 Fonzie hugs his 'Step-Brother' Artie at the end of the episode "Arthur, Arthur" in Season 11.

At the same time that Artie was visiting Fonzie in the Episode "Arthur, Arthur" Artie gave Fonzie the gift his father had left for him before his death. It was a pocketwatch which had an inscription on it. The inscription read "To Fonzie, First Son to Arthur: I may have left your life, but you never left my Heart - Love: Papa. In this way there was, in my opinion, a slight forgiveness between Fonzie and his father, despite his father being dead. 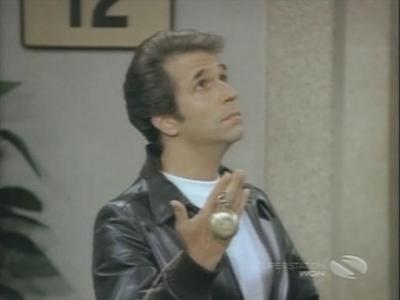 Fonzie after reading the inscription on the pocketwatch his father left him before his death in the episode' Arthur, Arthur' from Season 11. The Inscription reads:To Fonzie, First Son to Arthur: I may have left your life, but you never left my Heart - Love: Papa.

For a few years during the series, Richie and Ralph Malph left the series to go into the Army. Therfore, when Richie and Ralph returned in the Season 11 (1983 - 1984) episode "Welcome Home: Part 1" it was a joyful reunion between the two friends: Richie and Fonzie (And of Course Ralph).


Fonzie embraces Richie upon his return home in the episode "Welcome Home: Part 1" from Season 11.

A week passed after Richie and Ralph made their return from the army and Richie made the decision to move to california with his wife, Lori Beth, his son, Richie Junior, to become a Screenwriter. The final minutes between Richie and Fonzie in "Welcome Home: Part 2" are among the best of 'Happy Days' (in my opinion). Richie wrote a letter to Fonzie in order to tell Fonzie what he means to Richie. He asks Fonzie how you thank someone who's meant everthing to him. Fonzie takes the letter and through tears tells Richie that he loves him very much. Fonzie then exits. Richie takes one last look at the house where he grew up and exits... 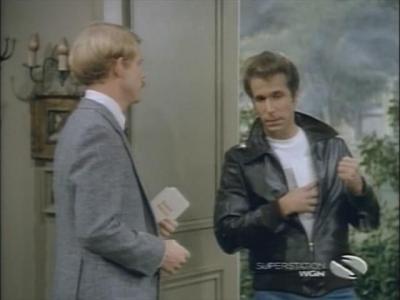 
Subsequent to these events in the series, Richie never makes much of an appearence after this episode (except for the Series Finale in which Joannie and Chachi get married). As for Fonzie, well he adopts a young boy, get's married and buys a house for them. And so, his transformation from 'Rebel' to 'Family Guy' is complete.

And so, folks, that is the story of Arthur Fonzelelli. Of course I missed some key moments in the series for Fonzie, but I hope I scratched the main surface!


Hope you enjoyed this Article, and remember, 'Happy Day's: Season 1 - 3 are available now on DVD, with Season 4 coming in December 2008! AAAAYYYYY!
14
Login To Vote!
More Articles From DrivingReport
-6
DrivingReport
Shaking Images
Images that have shaken Me & the World

10
Quote O' Matic
Herbert West: "You're never going to receive credit for my discovery. Who's going to believe a talking head? Get a job in a sideshow."
Re-Animator