The Professor discusses the do's and dont's of the Nintendo 64 game, Bomber Man Hero.
By MrNostalgia
On
The Retro Professor Hello there everyone and welcome to my first and hopefully successful article. I will be grading anything that can be reviewed really, the obvious ones being movies, video games and television shows but you never know I may throw in an interview once in a while and a couple of childhood stories here and there. As a child I grew up in the mid nineties so obviously I was playing consoles like the Genesis, Super Nintendo and the Nintendo 64 which brings me to one of my favorite games for the Nintendo 64. There is a chance that this article may be controversial as it may not be considered Retro but I'm going to go ahead and give it a go anyway. Please sit back and enjoy and this being my first article please don't judge it too harshly. 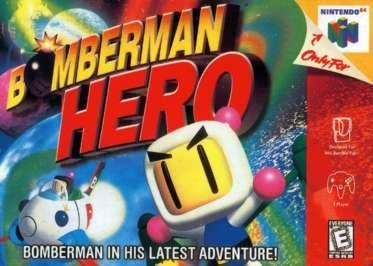 I am sure every one of you retro junkies have heard of Bomber man if you haven't come out from under that rock of yours. Bomber man is a massively successful video game franchise and is arguably one of the best multiplayer games out there but all that changed with the release of Bomber man Hero. Although the previous games were a big success Bomber man Hero sadly slipped under the radar and I don't blame it considering this was the year when Banjo-Kazooie and The Legend of Zelda: Ocarina of Time was released. Although Bomber man Hero isn't the best in the Bomber man series I still consider this a gem.


Bomber man Hero isn't your typical top down arcade style party game much like the previous games it's much more than that. It's more of a more platform oriented experience but the developers were careful not to let it stray too far from the roots of the original game. You'll still be throwing Bombs and collecting power ups, the only difference will be the fact that your in an open environment free to explore the levels which is a lot better than that of the Bomber man 64 single player campaign. The plot is fairly basic and predictable much like the Mario games, the plot basically follows the lines of 'Damsel gets captured and the hero goes on a quest to save the damsel from the villain'. But let me ask you a question do we play games only for the story lines? No we play games to relax and enjoy ourselves and Bomber man Hero succeeds in this. The plot that you follow throughout the game is similar to that of the Mario 64 plot and the ever popular Star wars film. Princess Millian obtains the secret data disk from the Garaden Empire but manages to get captured in the process (predictable much) and Bomber man proceeds to chase after her captors in a mad attempt to save his Princess, that's all I'll be giving away you'll have to buy the game to find out (or Google it). Throughout the game there are a few surprises and twists but it's an otherwise predictable and cheesy storyline.

Comparisons between the two 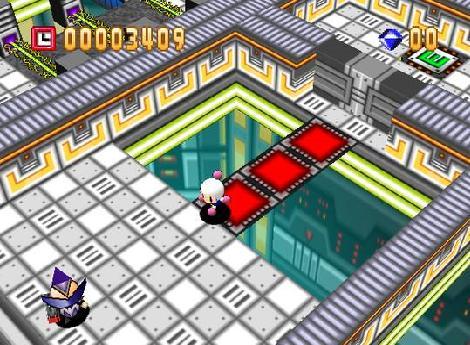 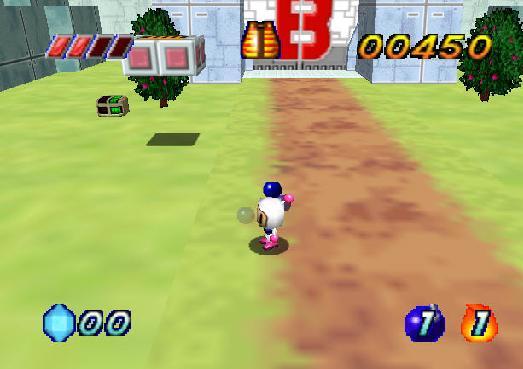 To my surprise this game had no multiplayer included what so ever, which may turn of some people as Bomber man is known for the multiplayer and I'll admit it did disappoint me. But once I dove into the single player and all its levels I suddenly didn't give a darn about the multiplayer anymore I only cared about saving the Princess from the evil Garaden Empire. The main thing that drew me into this game is its ability to be something different. There are 4 unique and quirky worlds to play in, Planet Bomber, Primus Star, Kanatia Star, and Mazone Star. Each world has a 3 or 4 of areas with a ton of different looking levels included in each area. The game attempts to create a sci-fi surrounding in the beginning stages but in all honesty playing through the first few levels of this game wasn't the best experience. The beginning levels are easy and bland barely showing any creativity at all. As I progressed through the story the difficulty rose and the level design begun to show its appeal. Things begun to get interesting and enjoyable, I found myself jumping up onto melting platforms, sliding down a snowy mountain on my snowboard and running up and down convey belts. It's like the creators of this game put no effort into the beginning and all the effort into the later stages.

A few great levels that I enjoyed 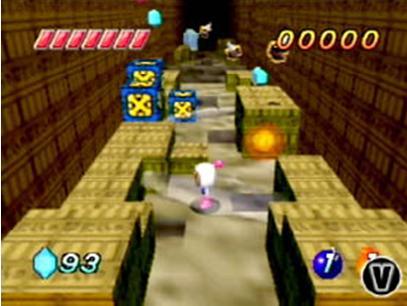 What would level designs be without graphics, the graphical presentation in this game is bright and cartoony and will surely appeal to kids, it's bubbly level design are part of its charm but I couldn't help feeling the graphics weren't all they should be, At times some of the animation was slightly choppy and the surroundings looked at times very pixelated and blotted but the game is cute and colourful enough you don't notice it all that often. The soundtrack was decent featuring a few classic Bomber man tunes as well as a few new songs, some of these were played too many times throughout a level and ended up ringing annoyingly in my ear and at times gave me a headache. The sound effects were just as irritating, the game featured mediocre sound effects, specifically when a bomb explodes I want it to actually sound like a bomb not someone passing wind. All in all the sound in this game was above average.

The game can look messy 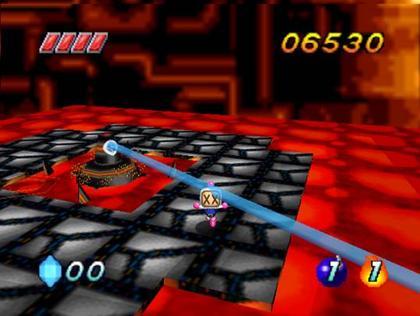 All the enjoyment I obtained from the game would not have been possible if not for the tight controls, The Nintendo 64 controller is known for being a clunky piece of junk but somehow by some miracle Bomber man Hero pulls it off with comfortable and satisfying controls. I experienced no finger cramps or swollen palms when I was playing this game, solid controls like these made the game a breeze to play.


I was gobsmacked at how much this game had added so much more depth into the already worn out Bomber man formula. Bomber man can move freely in an open environment and is the first in the franchise to allow Bomber man to jump thus steering towards more of a platform game more so than an arcade action game. Throughout the game there a different power ups to find which have never been seen before in the previous games as well as some additions seen in older games. Bomber man can now acquire ice bombs which enable him to turn his foes into ice, Salt Bombs which are the only way to harm enemies such as slugs and remote detonated bombs called control bombs which are useful against certain enemies and bosses, these are only a few of the vast variety of power ups. Not only does Bomber man kick ass on foot but he also kicks ass in vehicles, that's right Hudson Soft went above and beyond with the Bomber man formula. Bomber man can now ride Bomber Copters, Bomber Sliders, Bomber Jet packs, and Bomber Marines all with their own abilities and attacks. All the vehicles are really fun to play as more so than playing as Bomber man himself, I particularly liked playing as Bomber man and his jetpack.
These are seriously fun to ride! 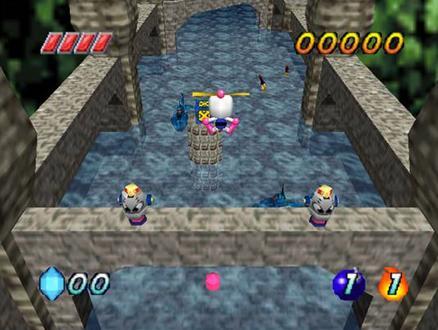 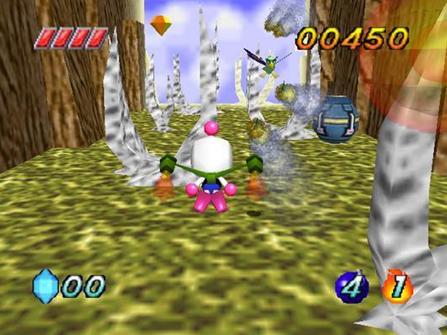 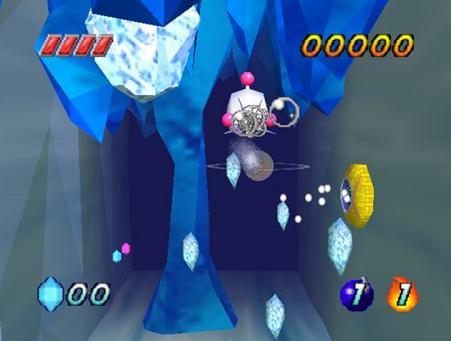 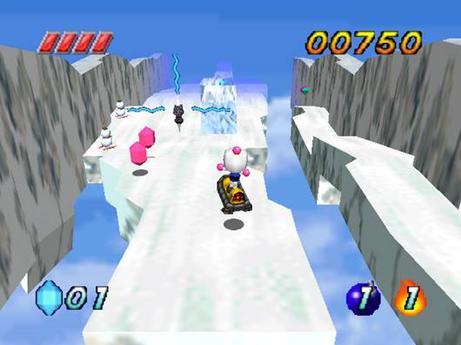 What are bombs good for without enemies? out of all the disappointments in this game the limited and bland enemy designs takes the gold. The enemies Bomber man is forced to face look terrible and that's not an overstatement. The enemy varieties could have been bigger. I would often have to put up with the same enemies for 2 or so levels until I saw something new and interesting. The character designs were just plain boring and I believe it was a let down for this game but thankfully the bosses show some creativity and can be a joy to battle against. The game is expands on it's predecessor so much that I had become to busy in the new power ups and vehicles to even think about the enemies all that much. 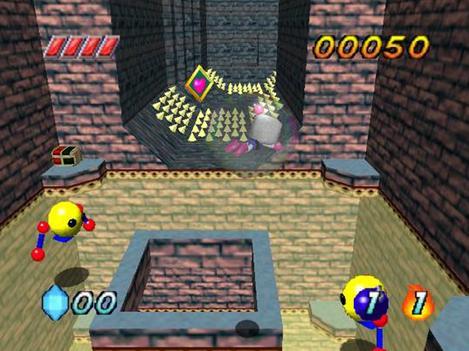 What the hell kind of bad guy's are these 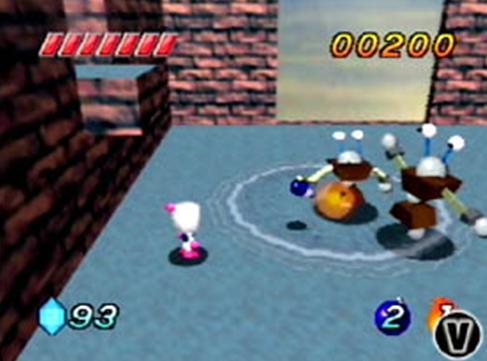 This was the best they could come up with?

At first glance of this game may look like your average, run of the mill, childish platformer but Bomber man Hero is actually much more than that and thinking that way won't do you or this game a favour. Bomber man Hero is a quirky and fun underrated platformer that I enjoyed from the beginning of the game until the end credits rolled by. Granted this game isn't for everyone yes there wasn't much enemy variety and the story is cheesy and predictable but there is alot of fun to be had if you look deep enough. If your not the kind of guy or gal that likes jumping from platform to platform killing strange and ridiculous looking enemies on the way then this game may not be for you. However if your a platforming veteran or your just looking for an enjoyable and cheesy platforming experience look no further than Bomber man Hero for the Nintendo 64.

The Test Results Are In 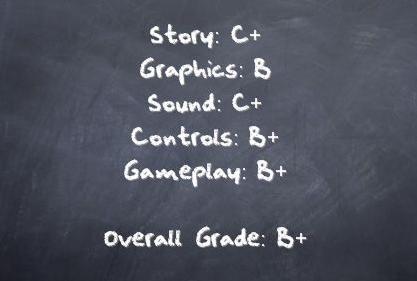 Thank you so much for reading my very first article and I hope it wasn't all that bad as it was my first attempt at anything like this. I realize this game isn't all that Retro but I really enjoyed this game and felt I had to write a review on it, I'll be steering towards Super Nintendo and Genesis games from now on. For my next article I managed to get an interview with John Marsden the Australian author who released many great novels in the late 80's and early 90's. 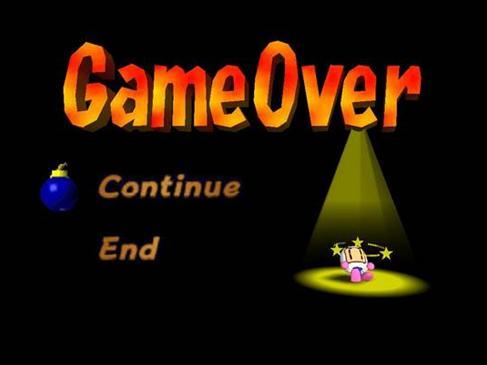 'GASP' Bomber man is down
for the count!!!... Can you help Bomber man save
the Princess from the clutches of evil?
10
Login To Vote!
More Articles From MrNostalgia

10
Quote O' Matic
Belinda and Ricky: "Belinda: I wouldn't go out there if I were you. Ricky: Good thing you're not me. -Belinda and Ricky"
Added By: System
Are you Afraid of the Dark?
An unhandled error has occurred. Reload Dismiss