Ghostbusters Mania '89 and Beyond

Ghostbuster birthday parties, Slimer slander and more!
By Hoju_Koolander
On
“2 in the box, ready to go, we be fast and they be slow!”

Once again I’m opening the containment unit and taking you on a journey through a time when 4 men carrying unlicensed nuclear accelerators on their backs made us laugh and made us cheer. Last article we covered what I call the 1st phase of Ghostbusters Mania that began with the release of the original film in 1984 and resulted in toys, cartoons and more. But by 1988 there were some new kids on the block. 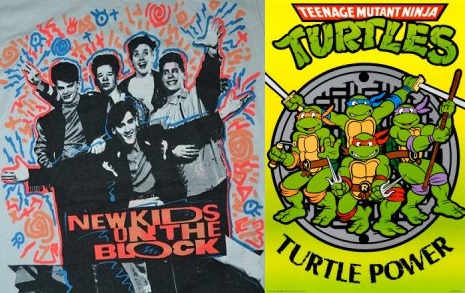 OK, literally there were the New Kids On The Block, but I was talking about the other teen sensations sweeping the nation, the Teenage Mutant Ninja Turtles. I can’t say that the green machine didn’t grab some of my attention and toy dollars in ‘88, but loyal child that I was, I held strong by demanding a Ghostbusters themed birthday party in May of 1989. As was the custom, in the daytime my school friends came over to enjoy a feast of ice cream and pizza. I’m pretty sure it was at this event that I scored my Proton Pack and Ghost Zapper toys (yes, those photos are me). 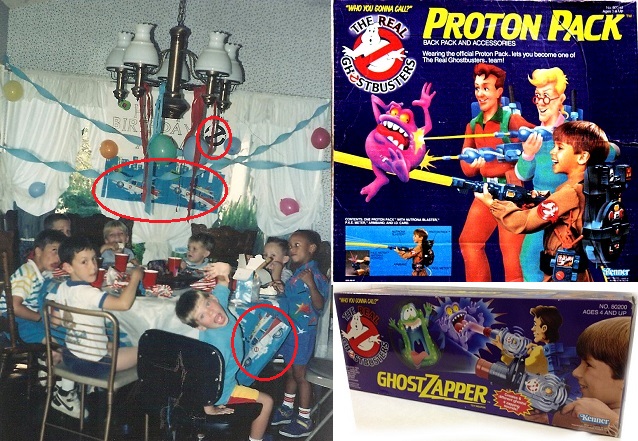 But it was later that night at the family party when my older brother and sister came home to celebrate, that I received an even more sentimental prize. As I sat clad in my Batman pajamas (OK, maybe my loyalty was waning a bit) I opened a box from my brother containing a translucent cube filled with circuitry that had red buttons protruding from 4 sides. The electronics themselves were impressive enough, but what really caught my eye was the Ghostbusters logo pasted to the top. My brother was going to school to be an electrical engineer, so it’s no surprise that he was able to build me something, but branding it as an official piece of Ghostbusting tech was genius! 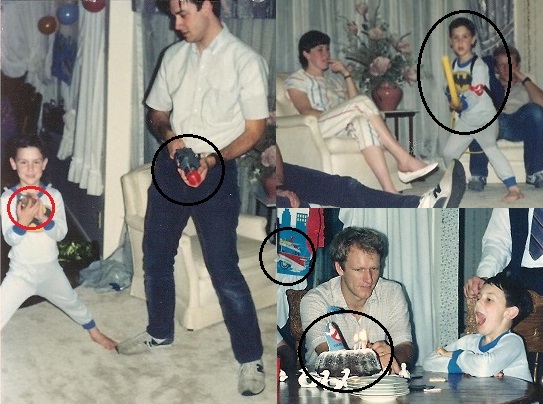 Basically when you pushed any single button the cube emitted an electrical sounding tone, but pushed together they created crazy “laser sounds” perfect for zapping Zuul. As you can see from the photo, the gift was appreciated. 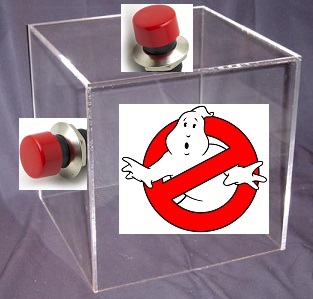 However, being a 7 year old, I did drop the thing several times over the years and eventually it got so cracked and broken that I threw it away. Sentimentality is lost on youth, since I wish I still had that awesome token of brotherly love today. 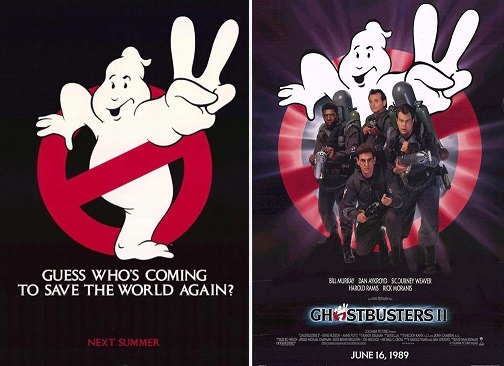 Shortly after my birthday, Ghostbusters 2 was released and you better believe I was in the theater seat for this one. Not fondly remembered today, GB2 is in fact my favorite of the series (I pre-ordered the blu-ray as soon as it was available for sale). That’s not to say the first film isn’t a classic, but this one makes me laugh so much more. Say it with me now, “Do, Ray, EGON!”. Peter Venkman hosting World of the Psychic is Bill Murray at his finest.

Really for me though, it all comes down to Peter MacNicol’s performance as Dr. Janosz Poha, the lecherous museum curator who acts as the Main baddie, Vigo the Carpathian’s henchman. With classic lines of broken English like, “So why are you came?” and “Because of all this blackness” (referring to a blackout caused by our boys in beige), he fills the movie with awkward hilarity from start to finish. Definitely my favorite funny foreigner in film.

Like I said, the sequel was pretty much obliterated by critics due to claims that it re-hashed the first film and it didn’t fare much better at the box office thanks to the massive marketing push for Tim Burton’s Batman. Around this time though, another green entity began to chip away at the credibility of the Ghostbusters from within, his name was Slimer. 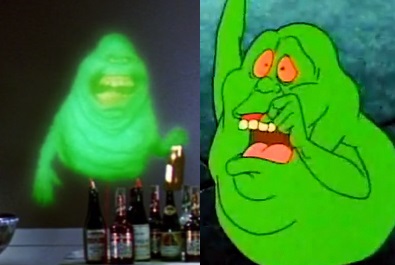 In the first film, Slimer was a grotesque, legless blob who moaned like a never ending belch and marked Ray, Egon and Peter’s first victory over the world of the paranormal. When he found his way to the cartoon series, he was a baby-voiced bumbler who bordered on annoying, but managed to win our affections with his sincerity. I think a great deal of why we put up with him also had to do with the fact that the "little spud" graced the package of a delicious Hi-C fruit drink called Ecto-Cooler. You know you’ve made it when you’ve got your own juice box.

For a much better history of the rise and fall of Ecto-Cooler be sure to check out the amazing articles by Matt over at X-Entertainment/Dinosaur Dracula (the man is a Retro-God), http://www.x-entertainment.com/articles/0822/. For my part, I can say that I was always impressed when I saw this in grocery store aisles. Slimer had a heck of an agent to get him this gig. Other juice box mascots came and went, but Slimer hung in there way passed the cartoon’s expiration date in 1991. He even got a box art re-design along the way during what I consider to be the Ghostbusters moment of jumping the shark. 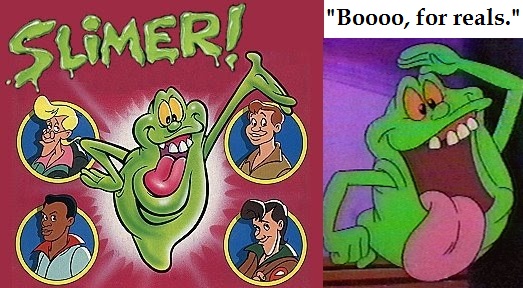 Despite being buddies with Kool-Aid Man, Slimer’s likeability was always borderline, then in the words of Dr. Spengler, “He crossed the border”. You see in the’88-’89 season of the cartoon series they actually changed the name of the show to Slimer and the Real Ghostbusters and altered the character designs to a rubbery, more Looney Tunes style animation. Just look at this cuddly garbage!

Soon Stantz, Spengler, Venkman and Zeddemore were hardly featured in any advertising. From comics, to cereal, to flouride toothpaste (wait, what?) it was all this gelatinous green scene stealer taking center stage. You’d think he would have had his name above the title in the posters for the film for all the publicity he got, not a 5 minute cameo in the first film. I was actually surprised as a kid when he literally shows up for 30 seconds split between 2 scenes in the sequel. I was sure they would have made him a featured player. I don’t hate Slimer, but boy was I sick of him by 1990. 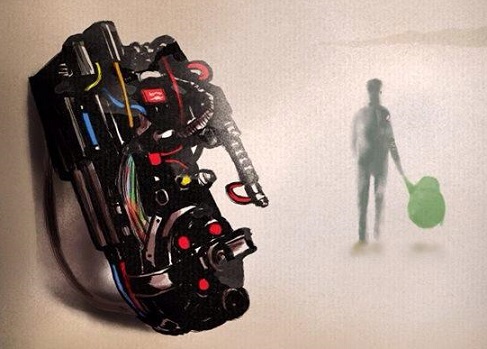 It was the “kiddification” of the brand that caused Ghostbusters to become a thing of nostalgia for me, something I liked when I was a “little”. I still watched the movies regularly, but the cartoon and toys were set aside for Batman, X-Men and the wackiness of the WWF. I was aware of the Extreme Ghostbusters cartoon, but it just didn’t have the same appeal. The containment unit seemed locked for good. 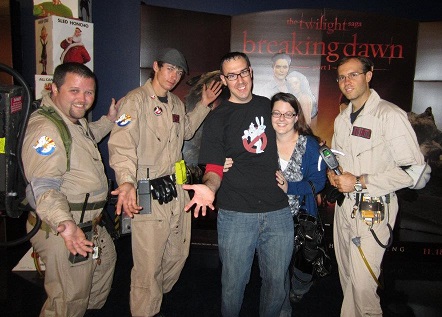 Then a few years ago while my wife and I were dating, we went to see a screening of the original film at a local movie theater. It was there we met with a group of local Ghostbusters. They had their own Ecto-1, proton packs, and even slime blowers from Part 2! It was pretty awesome to see guys my age who still appreciated the mythos as much as I did in my youth. I haven’t joined their ranks (…yet) but I applaud them for bringing the excitement of the film to life. And I'd have to say it was their enthusiasm that caused me to express my fandom in slightly different way. 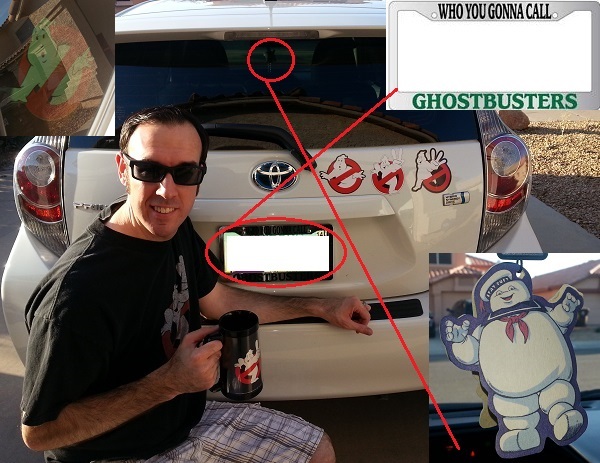 I have a habit of theming each car I drive, something to make me smile each morning when I head out to work. With the recent purchase of my PriusC, I got the inspiration to give it a Ghostbusters makeover. It’s still a work in progress, but I’ve got my “Who You Gonna Call” license plate holder, Stay-Puft air freshener and movie logo decals. There is also a vintage window-cling from 1986 that I applied to a back window, but with my car’s heavy tinting you can just barely make it out if the light is right. I think it’s fitting, as it mimics a ghost’s ability to appear and disappear at will. 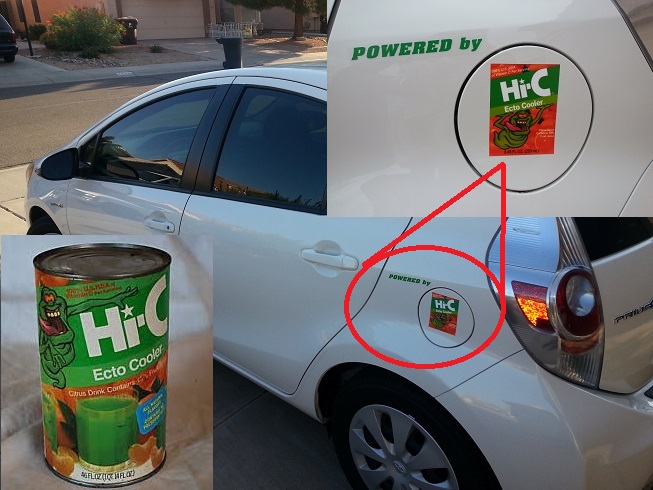 Of course my favorite feature is the fact that the car is powered by gas, electricity and Ecto-Cooler! When you think about it, any old stock of the juice isn’t safe to drink, so like Doc Brown’s Mr. Fusion in Back To The Future, I figured this was the best use for the stuff. There are many more modifications to come over time, but it’s still pretty fun for now. 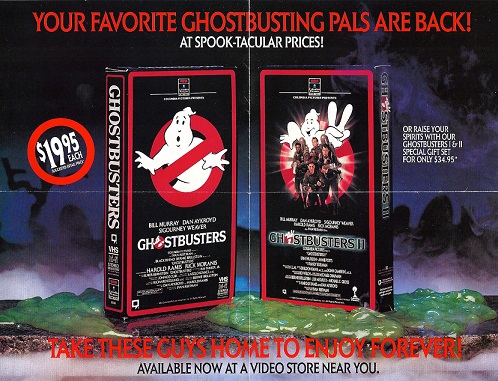 I think that's about it for now. I'm eagerly awaiting the delivery of the Ghostbusters 2 blu-ray to hold a marathon at my house to see how the Scoleri Brothers look in 4K High Definition. I hoped you’ve enjoyed this 2-parter and that it brought up some great ghosts from your past. I get a kick out of reading all your articles and think it’s awesome that we can keep giving this site life with our memories. For now, the light is green, the trap is clean.
15
Login To Vote!
More Articles From Hoju_Koolander