Hydlide - What a Ride!

Bonafide! Magnified! Dignified! Come inside!
By Xe-A-Thoul
On
There is a game on the Nintendo Entertainment System that is full of mystic and wonder. Taking on the role of a humble warrior who is off to save the princess, he must hoard his way through dragons, wizards, and evil blobs in order to succeed in his goal... and that game... was Dragon Warrior. 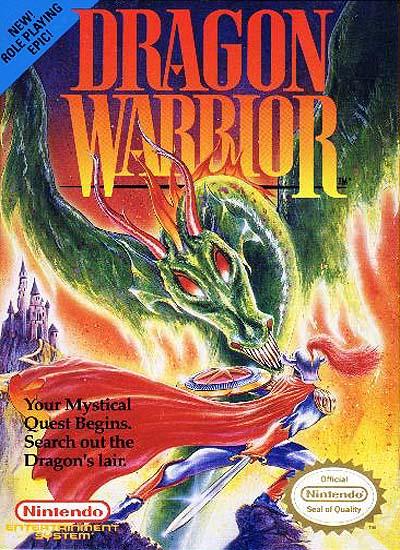 Well, actually, a lot of them are like that. However, the game I am going to talk about today has not only been called one of the worst NES games, but also one of the worst Action RPGs to've ever graced the world of gaming. It's... 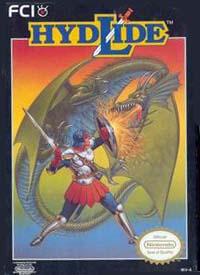 Now now, let's not run and hyd. A non-negative article based on Hydlide is a pretty serious risk, like the next step from a casual relationship to an engagement. If you are a reader of reviews from sites like GameFAQs, you may've heard things like:

"Hydlide really is that bad. And the esoteric game play apparently didn't suffice because the visuals and audio are equally lame."

"This is not fun. What's fun is bashing this game to pieces after playing it for the only 5 minutes possible."

But I am here to tell you that they are more wrong than Bill Cosby was about New Coke. Hydlide is controversial to most gamers everywhere, but that doesn't mean that there can't be people who like it... and I am, surprisingly, one of the few people who do. When you get used to it, it's not so bad of a game. Indeed, you have to have patience in order to successfully defeat enemies by charging them while holding the A button.

My Memories or: How I Learned to Stop Worrying and Love the Bomb

I have always had this game as a kid. My parents got the game as a Christmas present from one of their friends. Unsurprisingly, the whole family hated the game. They described it as tedious, monotonous, annoying, and painful. For a while there, I agreed with them. As I grew, so did my love for RPGs. When I was twelve, I've decided to go ahead and try the game again. It was as difficult as it was when I was a kid (well, obviously!) My health was low, and then I went to the bathroom. When I got back, I noticed that my health bar was full again... and somehow, the game seemed less difficult. I went ahead and played through it, and declared that the game is not as bad as people claim it to be, or maybe I'm just insane. Place your bets! 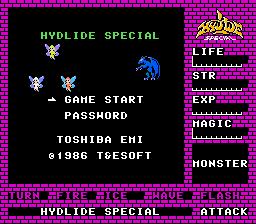 There lived three faeries that used to be one... [Screenshot from Famicom version]
You are Jim, a fine-looking knight of the kingdom of Fairyland. One day, an evil man broke into the palace containing the three magic jewels. By stealing even one of them, the power to hold Boralis, the game's big kahuna, subsides and breaks free. Boralis then proceeds to use a wicked spell to turn the lovely princess Ann into several faeries. Now Jim must do everything he can to rescue them and slay Boralis!

Okay, so it's another one of those damsel in distress plots, but what other creature splits the princess into three, making it more difficult to find her? Ooh! King Bowser Koopa and Ganon WISH they could do that! Well, maybe not Bowser since he kidnaps the princess for his desires... plus her cake. Mmm, strawberry!

No Time For Conducting, Dr. Jones!

Let us go ahead and get this out of the way. This is one of the reasons people do not like Hydlide, because of the game's repetitious main theme. There aren't a lot of songs in the game. There's the title/main theme, the password theme, the final boss theme, and the ending theme. All range from a variety of beeps and boops! Your experience may vary, since it depends on if you can handle songs that last twenty five seconds on an endless loop. Personally, it doesn't faze me, but I'm used to hearing repetitive music from video games, so it don't bother me. If it's your thing, well, quit yer belly achin' and turn up that volume, dude! [DISCLAIMER: Please consult your doctor before raising the volume level of FCI's lovely rendition of the Indiana Jones theme. Article writer is not responsible for possible bleeding ear rape during the process.]

The Legend of Ann 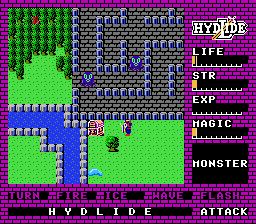 Bet you can hear the song in your head right about... now.

Judging from the screenshots, you might think that Hydlide is a clone of The Legend of Zelda, and... well, you aren't wrong. It's in a birds-eye view, you have to kill fantasy-based monsters and save a princess... that's about it, really. Totally different gameplay, however. Whereas The Legend of Zelda challenged gamers to use their brains to figure out how to get out of the dungeon or figure out where to go next, Hydlide challenged gamers to meet their doom constantly. That's no challenge at all! It's very easy to die, either from the terrain or from creatures at a higher level than you are.

No biggie! It's too easy to just press the A button to swing your sword. They made this game to where you need to hold A to attack, and release it to guard. In a way, it requires more strategy than your average top-down action RPG. You walk up to a slime, and you better hope it's not facing you, because then it's gonna hurt more than Donkey Kong shooting coconuts from his coconut gun that fires in spurts. It's easier to kill enemies when you're hitting them (or rather, touching them) from the side or behind. Hmm! A bit simpler to understand. Once you gain some levels, you're off to kick some more brutal ass and locate treasures and faeries, all for the sake of Princess Ann. Oh, did I mention you get magic? Well, you do. You learn five spells. Five! All of them are useful, too. He isn't going to beat Harry Potter in terms of pizazz, though.

Believe it or not, this game did have sequels. Hydlide originally started on the MSX and was ported to the NES, and from then on, there was Hydlide II and 3, Super Hydlide (an improved version of Hydlide 3), and... Virtual Hydlide. That's really all I've to say... Virtual Hydlide. 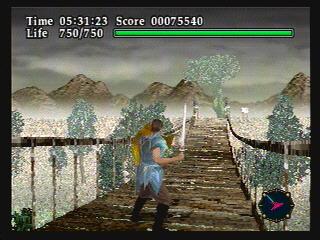 As far as living Hydlide can go...

So the point I am trying to get across here is... Hydlide isn't such a bad game. It is one that gets bashed constantly, and it really doesn't deserve the kind of bashing that other games truly DO deserve. From the game's trial-and-error fighting and obnoxious music, it's easy to understand why it's frowned upon like a third rate flick based on a comic book. By all means, it's not a great game, but it does well enough to keep you occupied. If you have the time, the patience, and maybe the sanity, get this game out of your closet or rebuy it from the man you sold it to at your garage sale, and give it another chance. Maybe then you'll see that peoples opinions on things can be singled out, and that there is someone out there that actually likes Superman 64... 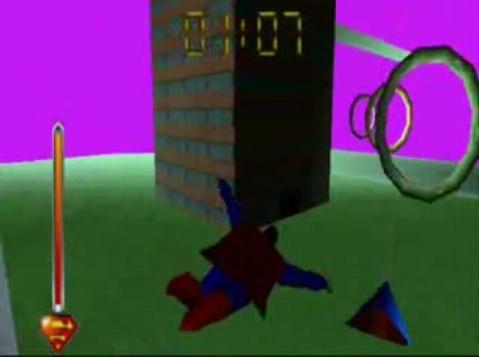 Pfffthahahahahaha! Who am I kidding?

A round of sound to RJ member ImAllTheRage, who dared me to do an article based on Hydlide. Thank you!
19
Login To Vote!
More Articles From Xe-A-Thoul

16
Xe-A-Thoul
Grandia!
My memories of perhaps the most astounding RPG of all time... plus how it was.