How this game practically owned me and my friends during 1998 and half of '99.
By fu3lman
On
It's hard for me to begin this article without explaining the subtle circumstances surrounding how the aforementioned friends and I ended up addicted to this game. Please bear with me. Grammar/Spelling Nazi's are welcome to pick me apart, as well as real Nazi's, trolls, Canadians and Carrot Top. 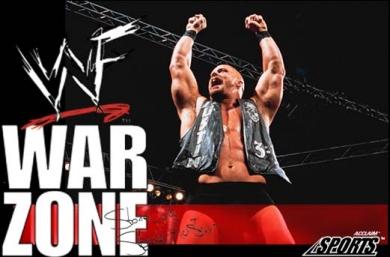 It was Autumn of 1998. I had a new job, new girlfriend, new car, and life was good. I had everything to look forward to and I genuinely felt like nothing in the world could bring me down. I had everything figured out, and apparently my parents thought so too, because they kicked my ass out.

19 years old, now looking for a place to live. I politely ask a close friend of mine if he'd like to go in halves on an apartment or trailer, to which he agreed, and we ended up in what could only be described as the single-wide trailer equivalent of a used rubber, and judging from the crap that remained on the lawn from the previous renter, it broke during intercourse. It didn't matter to us, the one key selling point to living in this 3rd world dung hole was its location; literally in the middle of nowhere. He and I both had ridiculously loud stereo systems, loud video games, and lots of loud friends, so this took precedence over trivial things like working toilets and central heating, and who the hell cares about clean drinking water anyway? We had a pad, it was time to get some friends over and play some of those damn video games.

It was this seclusion that helped foster what would become one of the most unhealthy addictions I've ever had.

Our daily lives continued on uninterrupted, and it would have likely continued that way until one friend decided to shatter our realities by bringing over god damned WWF Warzone, resulting in the severing of any ties to the outside world for no less than the remainder of 1998 and probably half of 1999 (a stupid year anyway). 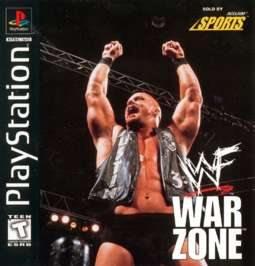 We were like deer caught in the headlights of an oncoming truck. Correction: A laser-guided radioactive supertruck, full of snapmares, choke slams, and more beatdowns than an immigration protest rally...with it's own entrance music and fireworks show, and we were caught in the ring, like some loudmouthed jobber about to get put right back into his place. Life as we knew it ended that very day.

Fast forward one week, the four of us living in the same trailer, mesmerized by this monstrosity, spending every waking moment living through the form and function of the squared-circle, unaware that we were slowly being taken over. My roomie and I paying the rent, and the others sleeping on the floor, existing merely to be awake enough during the day to put up a fight when everyone was around, and keep our fridge stocked with no less than 45 cases of Dr. Pepper at all times. A typical day had devolved from having a social life, girlfriend, spare time, to going to work late, coming home early, playing Warzone for 14+ hours, and enough sleep to keep a pulse going while at work. It was all we did, all we thought about, we didn't care about the outside world or the consequences of being shut-ins, we just wanted to play our god damn Warzone the rest of the earth turned without us.
Our home had been unofficially relabeled "The Shark Pit" by those privy to its goings-on, due to a particular game mode we practically invented, the "Shark Pit" matches. They amounted to a 4 on 4 free-for-all where we decided ahead of time which two players would be in the ring, and the two who would wait outside at all times, reaching inside the ring to try and pull some poor fool to his swift end. This was our default game mode, and the one that generated the most competitive rivalry between the four of us, and I'll be damned if it wasn't the more fun than riding the god damn fun bus to fun town and getting nailed right in the face with a fun shaped fun pie by Cap'n fun himself. Wait, I might have exaggerated a little there, because the Cap'n was too busy getting his face rocked in the pit to nail anyone with any "fun pie". 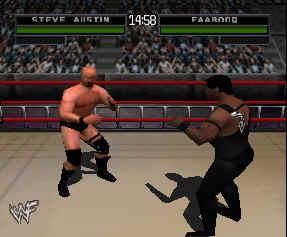 Folk's, I'm not joking in the slightest when I say that, during this period, there was nothing else on the entire planet that we would rather be doing (use your imagination, sickos) than playing WWF Warzone. And the curiosity that was the shark pit began to generate a sort of buzz. Less-than-close friends began showing up, intent on discovering where the hell we were, haplessly sucked into the ring with the rest of us hopeless junkies, and in a time before the internet was available to everyone and computers were affordable, we all had In-game identities that we referred to each other as, respectively, and without realizing the ridiculousness of it. Our characters BECAME our identities. We were bona-fide addicts, and you couldn't have put enough Warzone in us.

The ranks grew to the point where neighbors we didn't even know existed started calling the authorities to come out and investigate, and hilariously, the cops themselves were just as mesmerized by the spectacle as we were. Of course we never got in any trouble (we weren't doing anything illegal), but as far as warning signs are concerned, this should have been a bright flash followed by air raid sirens. But who cared, Legend was about to enter the ring and completely ruin someones shit.

"Legend" was my in-game character, and I was just awesome. None were cooler, or kicked more ass than me. I was immortal, and would only lose to make new players feel better about themselves, but to tell them that would have incited violence not uncommon in only the worst Turkish prisons. Let me put it this way, only now, after 10+ years, do I truly feel safe stating just how much the other guys truly sucked.

This whole mess proliferated to the point where it reached a critical mass. 15+ people over on any given night was insane for a trailer that comfortably held 5 in its best shape. Something had to give, and it did.

The novelty of what was, wore off. Friendships (if you can call them that) that were made, dissolved in the wake of waning interest. The hillbilly ass neighbors were happy again, and so were the police. The fridge bare of any Dr. or Pepper. What "was" had gone, and the rehabilitation was surely about to begin.

So the roomie comes home one day sporting a new Playstation, and Wal-Mart bag and a receipt for some stupid game called "Tekken 3"... 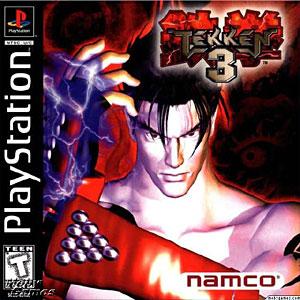