Psychedelic TV Made Me Who I Am Today
By Mesila
On
Born in July 1965 I came into being virtually smack dab in the middle of the Sixties. So the first layer of ambient brain programming I got was the belief that the whole world was on one big collective acid trip, and that this was totally normal, and was how it always was, and always would be.

No surprise why that should have been. I learned to read from trippy Sesame Street alphanumeric day-glo black-lite animated segues, and thus I could understand and write English sentences before I even went to kindergarten.

And everywhere, even in the suburbs, were hippie kids. And it was the hippie kids who were childlike and happy and FUN, while the straights seemed to always be grouchy and grousing and complaining - usually about what the hippies were doing.

I didn't get it at all: what was so terribly wrong with peace and love and flowers?

It frequently happened that when I was 4 or 5 years old, various grownups would ask that obligatory "What do you want to be when you grow up?" question any time they found themselves faced with talking to a child and couldn't think of what to say.

Whenever I got asked that, I'd proudly smile as I loudly announced "I'm gonna BE A HIPPIE when I grow up!!!" followed by repeating the word "groovy" or "psychedelic" over and over...Particularly the latter, as its goofy sound was fun to repeat. And "psychedelic", as I understood it, simply meant "colored with all 64 Crayola Crayons" Things like easter eggs or go-go-girls' dresses were "psychedelic".

Naturally any adults hearing me spout happily about my planned future as a hippie would either laugh out loud (uncles, my mom, just about anyone who was in their teens or 20s) or give me a totally mortified look (most of the aunts, my conservative whiny grandmother, and especially my dad, who'd get that eye-rolling Jackie Gleason look when this routine would transpire.)

My mom eventually convinced me to say "flower child" instead of "hippie" when queried by adults in any way about what I was going to be when I grew up (Would one just magically metamorphose from child into job-holding adult, like a pupating butterfly? That's how it sounded.) Then, she'd explain to the rest of the family that what I really meant by "flower child" was that I wanted to be a florist.

That seemed to solve it all for my folks. I just shrugged at the never ending weirdness of adults who constantly laughed at things I said that were totally serious, or else, took things that were nothing but silliness totally seriously.

It sounded like the same thing anyway, to me, as being a hippie. After all, I did love flowers. I surrounded myself with those colourful daisy images that filled the world from around 1967 to 1973 or so: tub sticker daisies, patio glass door daisies, bumper sticker daisies on VW Bugs...and then, later on, I got a kick out of planting and caring for real flowers in our back yard garden.

All the while I knew nothing of what sorts of flowers hippies loved best, which were green, and a bit...illegal. I heard some hippie kids sitting on the lawn next door once and one of them was talking about "green buds flowering" and I remember striding up to say to her, with a tone of authority, "There is NO SUCH THING as a green flower!" aturally was followed by lots of giggles from the hippies I was trying to impress with my knowledge of flowers. It seemed I couldn't do anything right.

When I got out of college I actually did work for a few years as a florist. But the world of selling flowers to people is not the same as the world of those who hand them out free to passing strangers while stoned playing guitar on a park lawn in the sun. It turned out to be all about people's extravagant, pompous weddings and funerals, and what I found really sad was the constant reality that florist shop owners can go broke very suddenly owing to the perishable yet essentially nonessential nature of cut flowers.

They would have to go buy stock wholesale at three AM three days every week, and woe to them if they just don't sell well that week,if no one was getting married or buried, because then, they'd see their investment wilt and become completely useless in a matter of days. Florists only do well around holidays - and those are so frantic and busy the flower-store owner has no time to appreciate the fact that money's being made instead of lost.

All my florist employers were cranky, depressed and run down - and they ALL hated flowers, though when chatting up customers they would try to pretend this wasn't the case.

In hippie-speak, it just really bummed me out.
I wanted to stay fond of flowers, so I quit, and concentrated on doing what I wanted to in the first place.

Which brings us to the 21st century: I am 42, living - where else? in San Francisco. I did in fact grow up to be a hippie, having been one since about 1981. 17 years of walking on the wild side. Wow! How many people do you know that are doing what they've wanted to since they were preschoolers?

I think most folks in their 40s have a touch of psychedelic in their brains, since it was everywhere we looked when we were getting our first glimpse of what the world around us was like. What else would have been a more natural outcome? We grew up surrounded by color TVs at a time when color TV was a of a novelty, like websites were in 1998. TV programmers and film people were enjoying that new "color" function and going whole hog playing with it, and having FUN.

As a child I'd no idea the psychedelic thing was faddish and would be replaced by New Wave and then Hip Hop. Of course it was all about marketing, and as young people become old new ones take their place and want their own identity.

We kind of got a raw deal, in a way, as members of the most minimally populated generation alive today - the forgotten "tweeners" that never got their own mass identity since birth control and sexual freedom led to far fewer babies being born in the mid to late 60s than the previous decade, and the ones that managed to become born became us. Too old to be Generation X, and too young to be "Baby Boomers". Advertisers didn't really bother to market to us, since we are "demographically challenged", so are not as profitable a target group as the people older or younger than we are.

I remember when this used to bother me. Now I think it's really cool. We are the Generation that Advertising Forgot.

I'll never forget how it was to come to understand that whole "look" that things had back when I was in my formative years was actually based on and influenced by the experience of taking drugs. Creators of TV, movies and music were taking extended vacations from reality on LSD Airlines - or else, merely seeking to appeal to all the people they were selling to who were blasting off to go
dance in space.

Naturally it was unnerving at first, since we get it drummed into us that anything to do with drugs is automatically either evil, stupid or both, over and over, by well meaning but often ignorant school personnel and professional government do-gooders.

But I have no regrets.The eighties were my sixties. Not quite so nifty looking, but who could tell the difference, if they're busy doing those things that hippies do? And I was. Still am, some of the time.

I can't help but wonder about kids whose minds are doing their own growing up nowadays, in the "double zeroes" with all the apocalyptic fearmongering going on...what are they going to be like, when they are my age? What will they be like when they're 21?

Time will tell, provided that we manage to get there in one piece and don't allow the ones in control, all across the face of the globe, to play a giant international game of "Let's Start the Apocalypse and See What Happens" first. That is the OTHER thing hippies did, besides acid: they managed to help end a rotten war that was killing their friends and making the USA seem less like a beacon of freedom, democracy and all that and more like a barbaric horde with automatic weapons and Agent Orange.

That hippie trip, or something like it but with technology and the common sense we only could gain from having past generations of hippies to learn from, about how to do it and how not to...it needs doing again...badly.

Sadly, it's now quite "hip" to hate anything remotely connected to hippies: kids have a hero in hippie-hating Eric Cartman now.

While Cartman's obviously funny, though, I wouldn't want to be like him.

Even if I hadn't been an example of his nemesis since I was even younger than he is supposed to be.
14
Login To Vote! 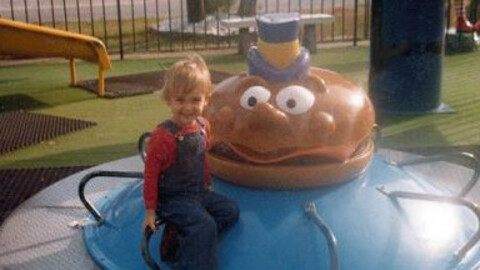