Movie Characters Team Up to Play Ball
By MtLaStella
On
[/color]]]]]]]]]was a kid in the 1990's, every summer me and my friends would play baseball from noon until the sun went down. We had maybe three or four gloves that each team used and a couple of baseballs. A big game for us consisted of a pitcher, catcher, two infielders and two outfielders for both sides. We used metal bats, but even still homeruns were hard to come by with the field we used. Our clique consisted mostly of right-handed batters and the left-field homerun marker was nearly twice as far away as the right-field homerun marker. Nonetheless, we have some great memories from our 'Field of Dreams'. Baseball was very very good to us. We were fortunate to grow up watching some great baseball movies. According to us "The Sandlot" was the benchmark of baseball movies, perhaps even all sports movies. 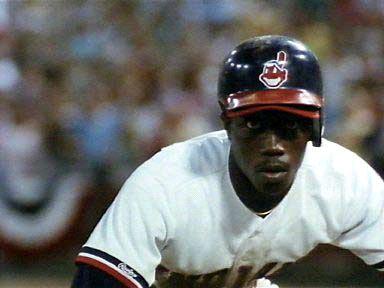 "Black Hammer" (as he's known in the acting world) is a speedy centerfielder with a penchant for swinging for the fences, instead of simply trying to get on base. You'd like him to get on base more, but when he does it's pretty likely he is or will be in scoring position. As he stated in the Cleveland Indians team commercial, "American Express - don't steal home without it." 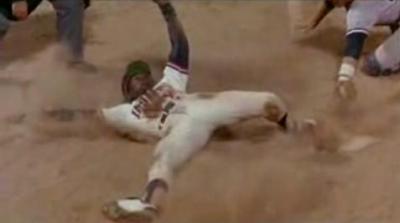 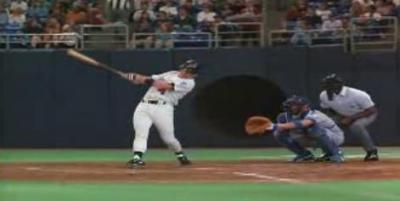 Ok, so he doesn't really look like a star baseball player (especially when you consider that the actor who played him also played Poindexter in "Revenge of the Nerds"), but the guy was the cornerstone of the Minnesota Twins. Plus, in the ninth inning of a must-win game to make the playoffs with two outs and one man on, he asks the manager's mother to marry him? WOW! Female distractions aside, he was the best hitter on the team. If only he was a little more focused that ball might have been able to clear Griffey Jr.'s glove. 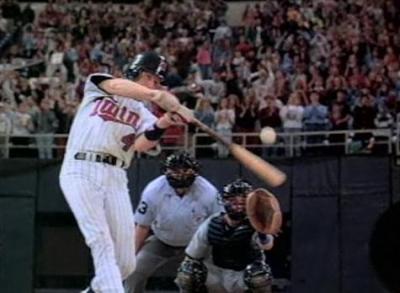 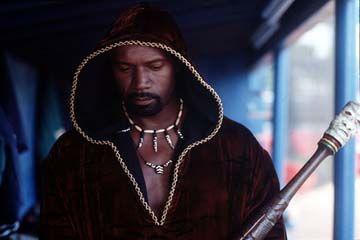 Pedro Cerrano (who bears a striking resemblance to Carlos Delgado) is a voodoo-practicing Cuban defector with plenty of power. Unfortunately, Buddhism was too passive and not good for his batting average. He can "hit straight ball very much", but the curveball is his achilles heel. Pedro finished in the top five in homers, RBI's, slugging percentage and total baldness. 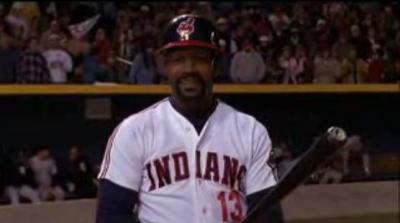 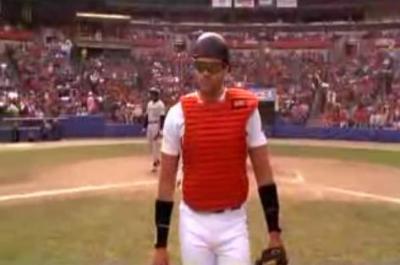 What team wouldn't kill for a power-hitting catcher like Parkman? He might be an all-around jerk, but what an ideal cleanup batter. Whether the majority of his teammates are indeed "losers by choice or by birth" is irrelevant, because the man will raise ticket sales alone to all the ladies driven wild by his shimmy. 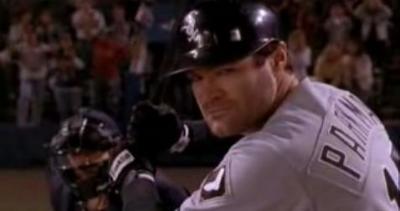 In the 5th spot, at shortstop - Benny "The Jet" Rodriguez[/size][/align] 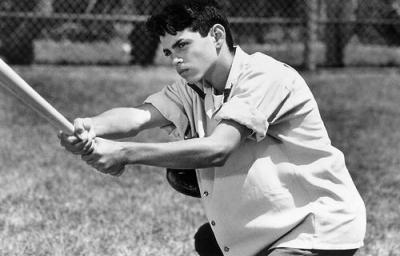 Long before he played on the Los Angeles Dodgers, "The Jet" outran a beast of a dog and smacked the hide right off of a baseball. Plus, he was a master at alluding rundowns between bases. His sweet swing helped him hit deep fly balls into the gap, which is perfect for this spot in the batting order (traditionally used for an RBI man). Combine all that with his ability to steal homeplate and B-Rod will most likely get his teammates out of a pickle. 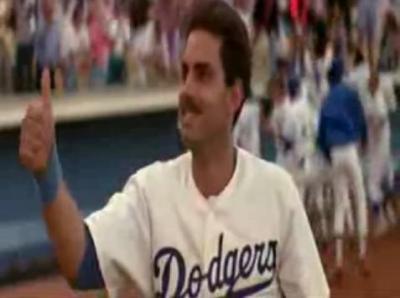 In the 6th spot, at second base - Marla Hooch[/size][/align]

The only female in the starting lineup, Marla is a switch-hitting slugger that scares even male pitchers. Put her less than pretty appearance to the side, because this gal can bop with the big boys! 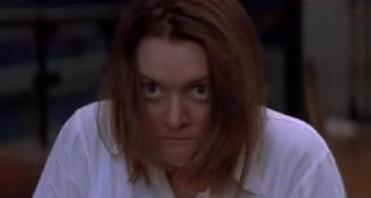 Marla Hooch was played by Megan Cavanagh in "A League of Their Own" (1992). 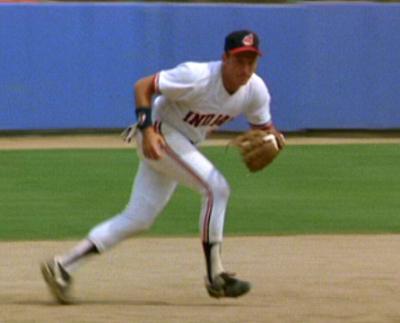 Player, general manager and team owner - he knows his baseball. Just don't ask him to do any calisthenics (it's in his contract that he doesn't have to). Whatever it takes he'll get himself on base, even if it means stepping into a 90+ mph fastball. All the fans are really looking forward to Roger Dorn Day at the ballpark. 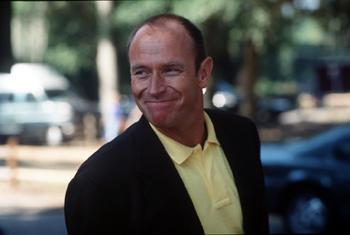 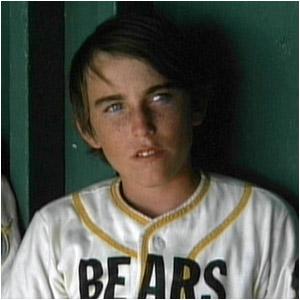 Bit of a troublemaker that rides a motorcycle, which means him and Rick Vaughn would get along just fine. He can play any outfield position and even has the capability to swing across the plate and get a hit off a pitch meant to be an intentional walk. Kelly just needs to learn how to lay off the cigarettes. 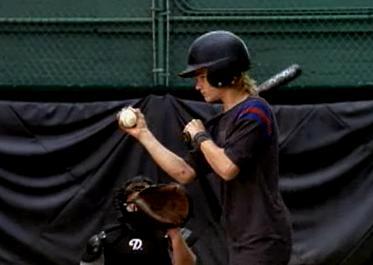 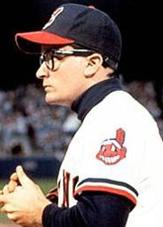 The ace of the staff, so long as he wears his leather jacket and skull glasses, Rick is probably one of the most memorable sports characters in cinematic history. His entry song for which he's nicknamed after is guaranteed to rile up the stadium. Just be sure to steer him clear of blonde babes trying to change his image. 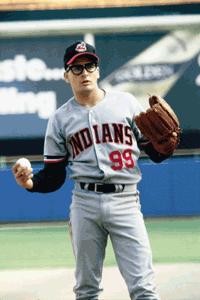 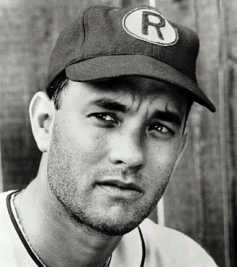 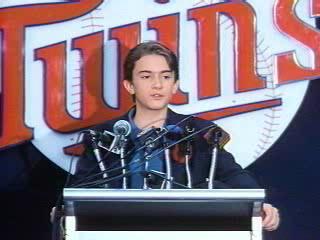 Knows more about baseball than his players, plus he can manage in a pinch

I know people will argue about not including Jack "Mr. Baseball" Elliot and Roy "The Natural" Hobbs, but I didn't watch those movies until recently. My all-star team is from movies I watched growing up in the 90's, mostly the ones geared toward children.

Below are some other characters you can argue vying for a spot on the team (players & staff):
Amanda Whurlitzer (played by Tatum O'Neal & Sammi Kane Kraft in "Bad News Bears") - has mental toughness that comes from being the only girl in an all-boys league
Bobby Rayburn (played by Wesley Snipes in "The Fan") - former three-time M.V.P.
Chet 'Rocket' Steadman (played by Gary Busey in "Rookie of the Year") - can bring the high stinky cheddar
Dottie Hinson (played by Geena Davis in "A League of Their Own") - can catch a baseball while doing a split
George Knox (played by Danny Glover in "Angels in the Outfield") - never know when those angels might show up again
Henry Rowengartner (played by Thomas Ian Nicholas in "Rookie of the Year") - heck, he beat those pesky child labor laws
Isuro Tanaka (played by Takaaki Ishibashi in "Major League II" and "Major League: Back to the Minors") - samurai style defense
Jake Taylor (played by Tom Berenger in "Major League" and "Major League II") - not only a proven catcher, but a proven manager
Lou Brown (played by James Gammon in "Major League" and "Major League II") - not afraid to literally piss on player contracts to put them in their place
Mel Clark (played by Tony Danza in "Angels in the Outfield") - ...on second thought, he's supposed to die from lung cancer
Mike McGrevey (played by Scott Patterson in "Little Big League") - after intentionally playing bad to get traded, he turned it on and struck out the side with ease
Tanner Boyle (played by Chris Barnes in "Bad News Bears" and "Bad News Bears in Breaking Training", also played by Timmy Deters in the remake of "Bad News Bears") - gotta love that Napoleonic complex

Calling the game from the broadcast booth 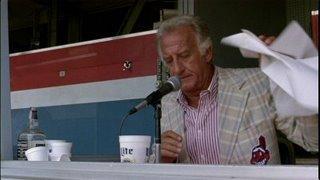 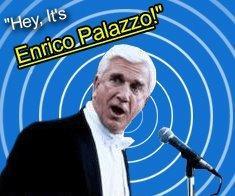