Getting cable
To readers from some other countries it might be strange to hear that up until 1983 there was a TV monopoly in Norway. What this meant was that we only had one tax funded tv channel with no commerial ads. There were no other channels.

However in 1983(the year I was born) a bill was passed in government lifting the monopoly and allowing for broadcasting of other channels. The passing of this bill also meant that we could get foreign tv channels through cable, spawning a huge cultural difference in Norway between the kids growing up who had cable and those who didn't. At least this is how I percieved it to be :)

I have to say that for me the biggest advance was getting the british channel SKY channel.

Imagine going from half an hour of childrens television a day to plugging in a cable and getting morning cartoons, sitcoms in the afternoon and a whole range of commercial shows that we had no idea even existed. In fact I think this sums it up perfectly: None of the shows aired were dubbed in Norwegian, or had Norwegian subtitles, and we still watched it religiously. Half of us probably had no clue what we were even watching.

In fact by the time i started school as a six year old in 1990 I had teach my self to talk English fluently, simply by studying how the characters on tv behaved and connecting it with what came out of their mouths. To me this is amazing.
English class in Norway usually starts in the third grade.

Sky Channel, shows and commercials
A typical day of watching sky channel would usually commence at six in the morning, with me waking up early to catch a glimpse of the DJ KAT SHOW before heading to kinder garden. DJ KAT SHOW was essentially a really hip cat and a female human helper called Linda doing shenanigans, reading fanmail and hosting cartoons. This was the show were Transformers, He-Man, Brave Starr, Silverhawks, Thundercats, She-Ra, Popples, Care Bears, Dennis, Inspector Gadget, Heathclif and so on got shown. Later in the afternoon you would get shows like the Simpsons, Family Ties, WWF, American Gladiators and other great shows. In the weekends, if you got up early, you would get The Fun Factory from 6 am to noon, which was essentially the same as DJ KAT SHOW only more cartoons.
In fact, take a look at this poster and see if you can remember some of the old shows from SKY channel 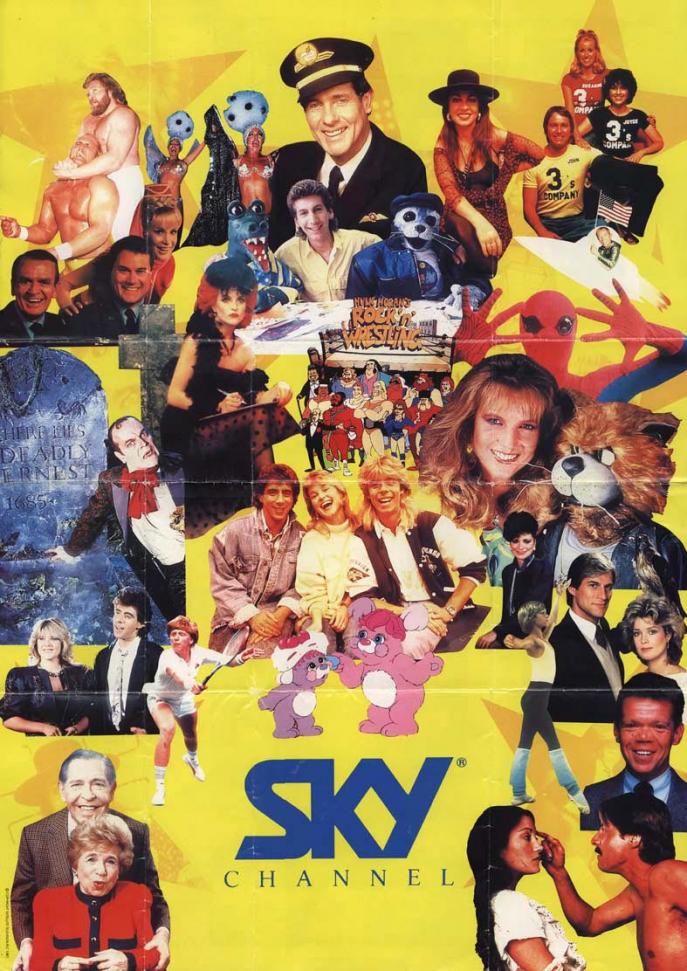 Watching a foreign tv channel lead to some problems when it came to commercials, because you were watching ads for products that weren't neceserally sold in your country.

I remember imagining what froot loops, Kit Kat, Weetabix and other products would taste like. I remember hearing about Kool Aid and wanting to taste it. Kool Aid was and still is banned in Norway due to large amounts of artificial coloring.

Growing up with friends that didn't have cable
Normally if you lived in smaller cities some streets would not get cable as early. Because building infrastructure in Norway requires a lot of digging, buerocracy and removal of really big rocks :) Some parents also refused to get cable since they either were content with one tax funded channel or did not want their kids to get bombarded with commercial shows and ads. Quite understandable.

I remember one of my best friends watching cartoons with me, and as soon as the half-way commercials came on he would jump up and proclaim "okay, the show is over, let's go play!". I never really reflected on it at the time, but of course he did this because he didn't understand English, and the only thing he could differ were cartoons and commercials. We were five at the time..

Toys were a whole different story. I never thought about it at the time, but as a kid I would play with my action figures in english. Why? Because the dialogue on tv was in english and obviously I couldn't imagine my toys talking any different. To other kids this must have sounded strange. Toys that were imported from the US also had a pretty steep price tag in Norway which led to you owning just a couple of toys from each franchise. From some shows you would only own one of the bad guys and others only a couple of good guys. This lead to a lot of cross-cartoon battles in my bed room.

Anyway this was all I had for this time. Hopefully this was somewhat enjoyable ;)
15
Login To Vote!