Taking a terrifying trip down Fear Street and beyond...
By devonsdomain
On

I'm sure many of you kids of the 90's remember the "teen terror" books as I like to call them. There was R.L Stine, Caroline Cooney, Lois Duncan, V. C Andrews, Christopher Pike, and so many more. In the early 90's I was in middle school and I recall my schoolbooks and notebooks sitting neatly in the upper left hand corner of my desk with a pen and pencil sitting next to it. On top of my mound of books usually sat a R.L Stine book, particularly his "Fear Street" series. The first of the series was published in 1989 and entitled, "The New Girl" which I actually just finished reading for the first time. Most all of the series takes place in a town called Shadyside and the kids all go to Shadyside High. There is one street that even if you say the name, locals shudder: Fear Street. I know, I know, sort of cliche. However, the way Stine weaves the different stories and plots and delves into centuries old history regarding the street and town, it's very interesting. Over a hundred books later, this teen thriller series is still going strong.

The first in the series called, "The New Girl" 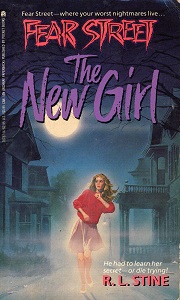 There was everything from dead prom queens, to bullied kids who take revenge on their tormentor, babysitters terrified by freaky phone calls while at home with the kids, haunted beaches with murdered lifeguards, vampires, haunted houses on Fear Street, witches from centuries ago still putting spells on the locals, psycho step-siblings, the mysterious new girl at school, even a first date that turns obsessive and deadly ...you name it, Stine wrote about it. The incredible part of his writing is it is not repetitive. I adore writing, but it would be a challenge to keep coming up with new spooky stories left, right, and sideways.

One of my favorite books is called, "Goodnight Kiss." I remember reading it as a kid, and recently found it at a local Goodwill store. I am now an avid collector reclaiming my youth and hunt the local thrift shops for these books frequently- they are the best place to find them and at a low price to boot. "Goodnight Kiss" is a story about a girl named April who has a boyfriend and they are back in a resort area for the summer with their families. One night, the couple meets a mysterious young man named Gabri who turns out, is a vampire out for blood. I don't want to spoil the book, but needless to say this vampire wreaks havoc amongst the tourists and seduces April, leaving her boyfriend frustrated and desperately trying to discover Gabri's secret. Will April's boyfriend Matt be able to save her from the vampire's kiss in time? Read it and find out!

One of my favorites, "Goodnight Kiss" published in 1992 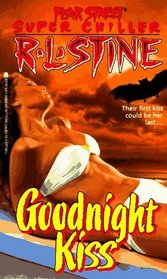 Now a little back story on the author, R.L Stine.... 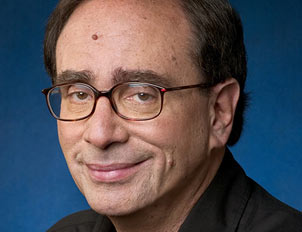 He was born in October of 1943 in Ohio. He was a graduate of Ohio State University, and earned his BA in English. In 1986 he wrote his first scary book entitled, "First date." (Good book by the way!) After that he was on a terrorizing train writing the Fear Street Series, the Goosebumps series, Mostly Ghostly, and the Nightmare Room Series. He has been referred to as, "the Stephen King of children's literature." What I like about Stine is the fact he can be scary, funny, and even at times a bit raw. To work all of that into kid's books is probably not an easy task. The Goosebumps series is geared for children around the ages of 10 and up. His other books such as Fear Street are more for teens to adults. Hey, I'm 35 and some of his books still scare me!

Goosebumps gained so much popularity that a television series was created and aired in the mid 90's. It had four seasons and ran from 1995-1998. If anyone is interested in watching some (they are very entertaining) the entire series is currently on Netflix. I really enjoy watching them because I myself have read some of the Goosebumps books, and the TV show really sticks to the original books.

The intro for the "Goosebumps TV Series"

Let's face it, most like a good scare every now and then, but maybe not to the point of jumping out of their seats. Stine's books offer the strange and unusual with good plots, but still offers a safe haven to come back to. Some of his books end with events being a twisted misunderstanding. But books like, "Goodnight Kiss" are not always going to leave you with a smile and happy ending.

"Don't listen to the stories they tell you about Fear Street. Wouldn't you rather explore it yourself...and see if it's dark terrors and unexplained mysteries are true? You're not afraid, are you?" That quote is on the back of every Fear Street book. That's right, don't be timid, come on over to Fear Street and learn its secrets and lore: you'll be dying to read every story once you delve in deeper.... 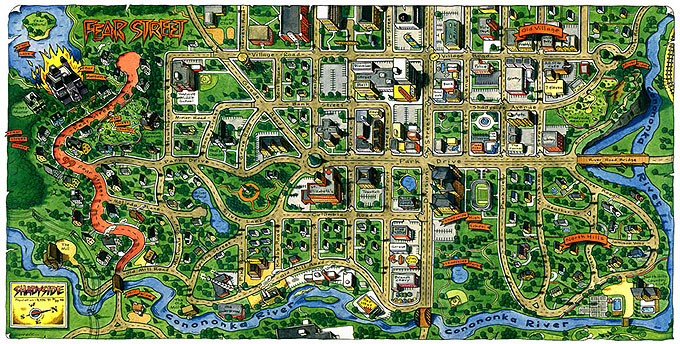