Giving a whole new meaning to "[email protected]!"
By Retrogamer
On 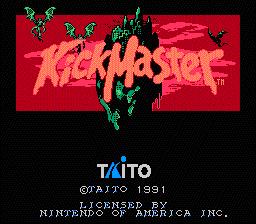 Castlevania and Ninja Gaiden...the mere whisper of these names triggers an avalanche of "Great Game!" comments on video game forums. And why not? They were the candy we looked forward to when coming home from school or going over to a friend's house. They were...wait, scratch that! They ARE fantastic and fun games. However, there's one game that's more [email protected] than the two games combined, but has not gotten as much recognition as it deserves. What game is it? The Kickmaster for the NES! 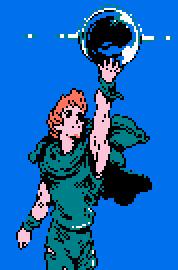 Thonolan, a warrior garbed in blue, is the main hero. Armed with his skills in martial arts, he sets out to destroy the wizard, Belzed, and her wicked army to rescue the princess and avenge his brother and kingdom. How can a martial artist like Thonolan be more [email protected] than a ninja and a vampire hunter? The answer can be summed up into a strange yet interesting tale. 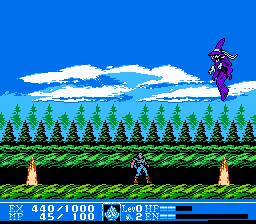 It started out acting like a typical hack-n'-slash (or kick-n'-beat, in this case) game. B button for high kick. A button for jump. Jump kick was A and B together. Low kick with Down arrow and B for some added variety. Nothing too surprising until an ominous voice called out. 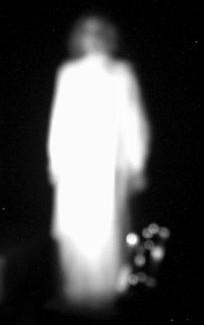 
Don't know whether it was fear, excitement, or the wet feeling between the legs, but it was a joyful sight stamped on these eyes when seeing... 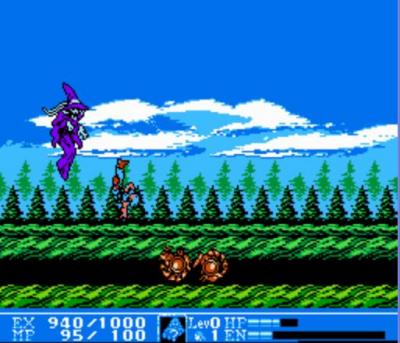 "if you reach level 1,
the Knee Drop will come." 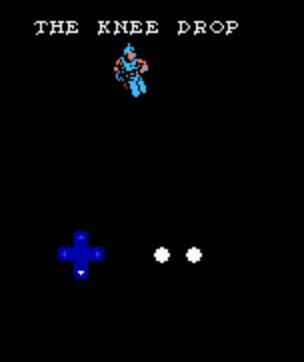 The ultimate goal of any action game is to make the player feel like he/she is the biggest, baddest being ANYWHERE! The Vertical Kick and Knee Drop alone raises Kickmaster's gameplay to a level of near greatness. Just imagine how much better games would be if they added similar moves. Mario's fireballs can finally hit those flying Cheep-cheeps. Ryu Hayabusi can slice enemies straight down the middle with a downward sword strike. The Belmonts will finally utilize the full potential of their whips and teach those annoying Medusa Heads a new meaning for "Whipped!" The two moves bring a flexible and freedom feel that relieves the unnecessary frustration in many 8-bit classic NES games. 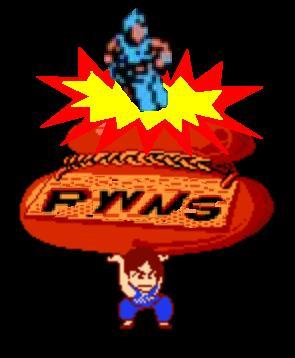 Thonolan is no 2-trick pony. He's got more moves in his knee than in 8-bit Jackie Chan's whole body! 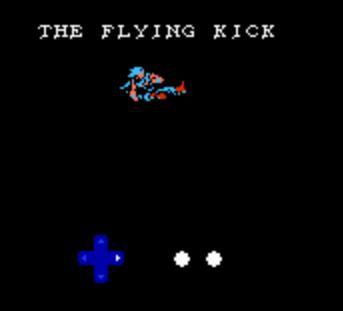 Where to start... How about a flying kick so fast speeding bullets move like tortoises.

Don't have enough room to fly? Then hit them low and fast with the Sliding Kick. 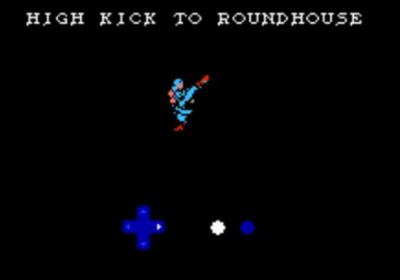 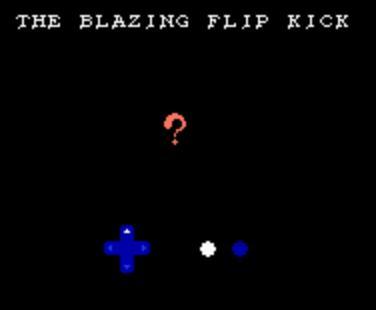 Blazing Flip Kick will send any unfortunate foe on a one-way to the stratosphere! The list goes on and on.

In other games, the button control were simple in which one button for jumping and the other attacking/running. The developers for Kickmaster utilized the NES controller better in such a way that it feels like playing a fighting game with the same level of fun as Street Fighter II.

The Options menu in the title screen has a demo of all the kicks featured in the game. It reveals how to execute each kick and at which level. Now that's customer consideration! No need to worry about having manual. 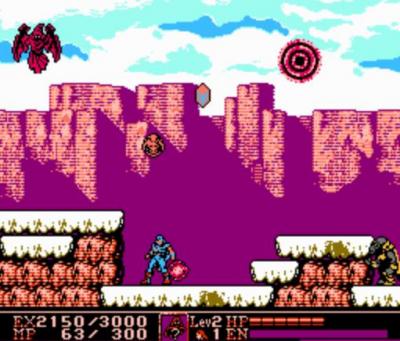 Kickmaster also incorporates RPG-type elements into the game allowing the hero to level up. With each new level, Thonolan's HP and MP MAX increases and learns a new [email protected] move. To reach the next level, Kickmaster kicks evil butt, but the points are not awarded automatically. The slain foe instead will drop items which hero must grab before they fall out of the screen. These items include experience, hearts (for HP healing), magic bottles (for MP replenishing, and damage (OUCH!), preventing the game from becoming dull and repetitive. 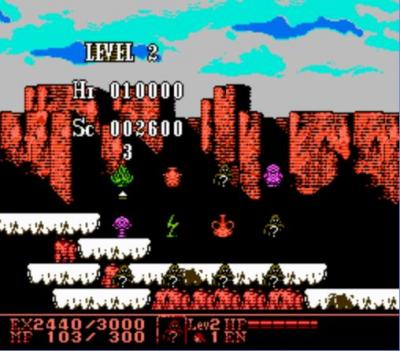 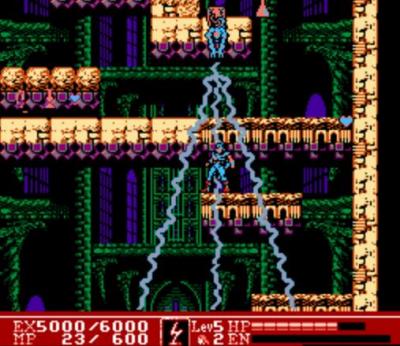 Along with his fancy footwork, the Kickmaster can use magic by calling upon the spirits to do his bidding. These are obtained by finding them or beating the boss of each stage. There's nothing more [email protected] then striking an army with a blitz of lightning bolts, or triggering an earthquake to scare the crap out of them so hard, they're scared stiff. 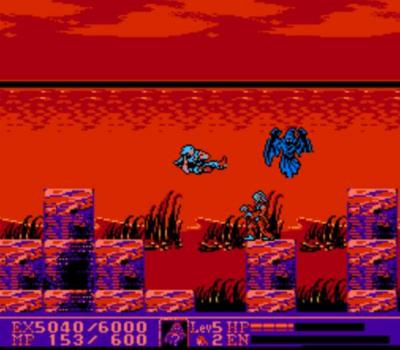 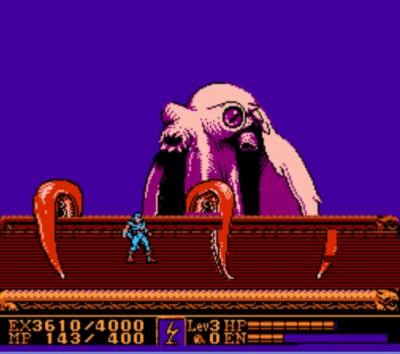 As any Street Fighter veteran know, half the challenge of any fighting game lies in mastery and timing of the moves. Flying Kick over a series of bottomless pits doesn't scream out "Genius!" The other half will come from the 20 bosses our hero must face, and some of them are big as the screen. With 8 stages and enough Knee Drops, the game can be beaten in a few short hours, which there lies one of its faults. (Personally, I believe there should have been 20 levels, at least.) 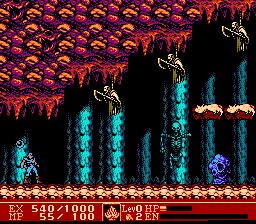 The only other gripe with Kickmaster is its graphics. The images aren't as clear and the details seemed blurry, as it is hard to tell what's what. The flickering of items and some enemies does make it hard to know what to hit and what to get. This flaw is overlooked by the awesome sounds that compliments the game perfectly as a [email protected] action-platform. The music alone will set the mood for a field day of monster-bashing fun.

If the game was too easy the first time, Kickmaster throws off the kiddie gloves and challenge the player for another go around on a harder mode. However, it is only acquired by beating twice and each time you start over from scratch, at level 0 with no experience and magic. To save the players trouble, here's the password to get started on hard mode: "T8T6F3 (diamond)9FOL9" 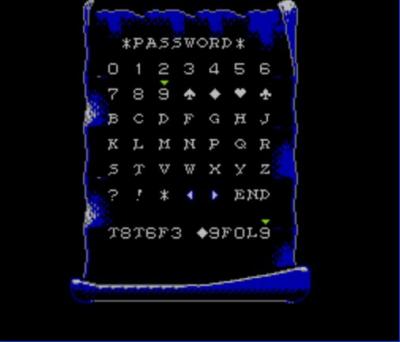 Many critics complain Kickmaster is nothing more than a Castlevania/Ninja Gaiden clone, although true as the core of the game is kicking monster hide. The true beauty of the game lies in coupling action with fighting-style moves with RPG elements. It results in a gameplay experience always fresh and fun and never stale or repetitive, along with endearing traits that make it stand on its own two feet. 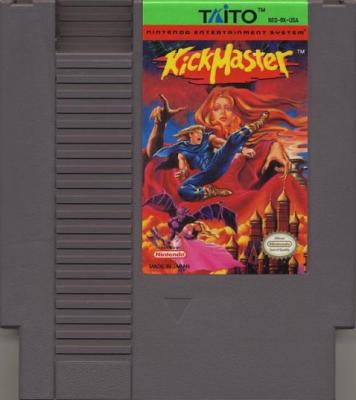 Only one question remains: how did it get overlooked? Kickmaster was released in 1991 and developed by Taito, the same guys that brought Bubble Bobble and Bust-A-Move. It was the same year Nintendo released the Super Nintendo Entertainment System and Sega's release of Sonic the Hedgehog onto the Genesis. People decided to save their money for Sega's blast-processed blue hero or the Nintendo's 16-bit successor's games. Most NES games went unnoticed from that time onto to its halt in production in 1994. 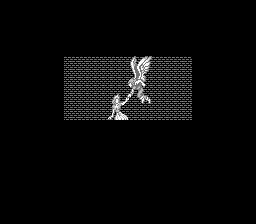 Final thoughts for Kickmaster is a great game, fusing multiple genres of action, fighting, and RPG, that will leave you with the most [email protected] and fun time ever experienced on an 8-bit game. Despite being short, it will leave most players a great feeling from start to finish. 17
Quote O' Matic
Data: "Dr Crusher is right. I do tend to babble. -Data"
Star Trek: The Next Generation