Hugs, Erol's Video, E.L. Fudge, and More!
By Spencer
On 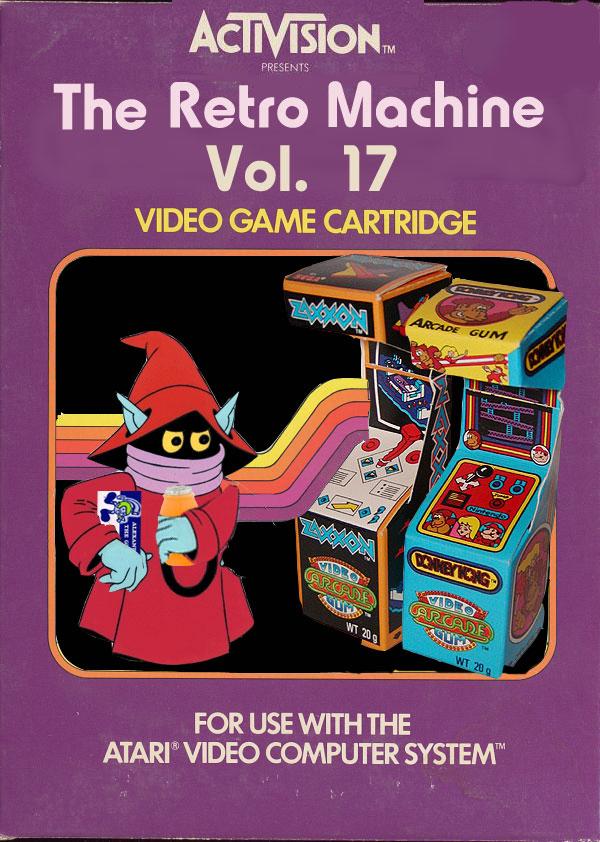 I've had a blast putting together these next several items. I hope these are as fun for you to read as they are for me to write. So go grab yourself whatever your favorite retro treat is, be it a bowl of ET Cereal, or maybe those awesome microwave smores from the mid-90's. Go on, I'll wait here. All set? Good, let's get started.

Oh I should let you know that you can now join The Retro Machine on Facebook. If you enjoy it, then please go here to become a fan:

I'm gradually uploading theme photo albums that will eventually consist of all of the almost 200 items featured here on Retro Junk. Plus, you can bet on the fact that stuff will go up on Facebook that I just never put in any articles. I'm really looking forward to having fun with it, so join me!

Ants In The Pants 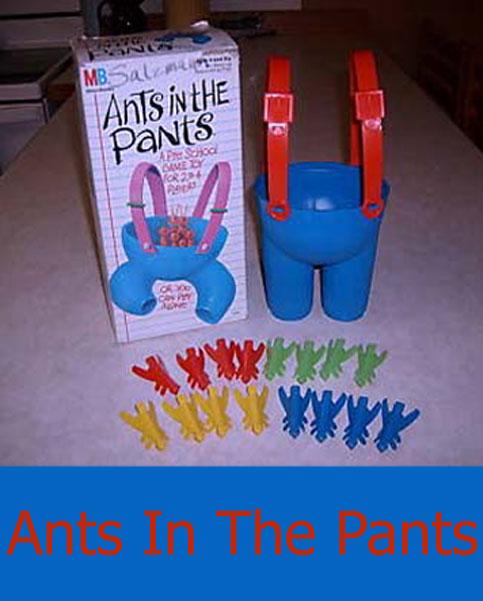 This classic game from Milton Bradley was always on hand at my grandparent's house. The idea is that you have this pair of trousers and each player gets a different color ant that they have to get to leap into the trousers. Each ant has a little tab on the back that, when pressed, sends the ant flying into the air. It was very satisfying to get the little buggers to actually land in the trousers. 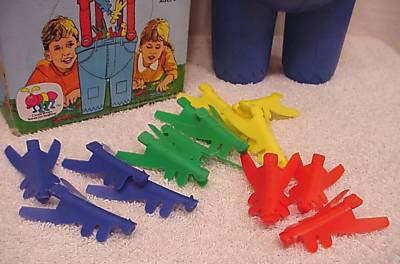 As much fun as it was to flip the ants up in the air, we usually ended up finding other things to do with them. We would make up stories that revolved around the ants, giving them little personalities and such. I recently bought this game for my daughter and was happy to see that the magic was still there. She hasn't made up stories about the ants yet, but she did put them all into a mini crock pot and we made "ant stew". 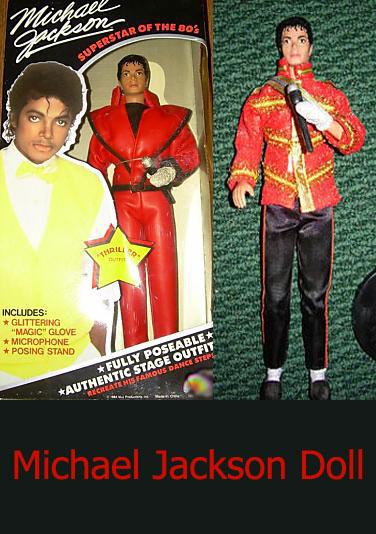 I was a huge Michael Jackson fan when the Thriller album came out. I played the cassette tape so much that my parents made a back-up copy of it in case the original copy wore out, which it did. Of course, being a huge fan at the time meant that I was graced with some MJ merchandise. This Michael Jackson doll, which I had the "American Music Awards" version of, came with removable clothes. Most notably, the famous glittering white glove, sparkly white socks, and black shoes, it all came off. 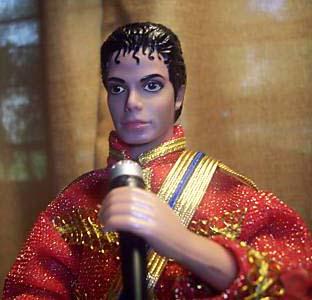 He also came with a removable microphone and a really annoying plastic stand that never seemed to work right for me. Though it didn't look much like Michael and it really bordered on "too girly" for a boy to own, the coolness factor of Michael Jackson outweighed everything else at the time. 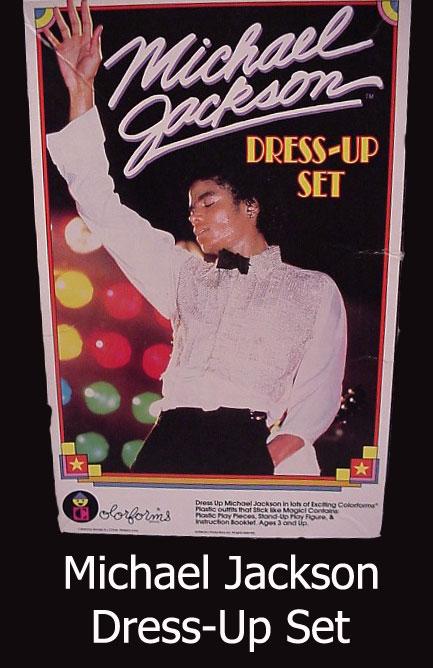 For those kids who were just not comfortable with owning a Michael Jackson doll, you could always turn to the Colorforms Dress-Up Set! I was a Colorforms nut as a kid, I had Colorforms for just about any toy line that I followed. So of course, I had this MJ-themed set! 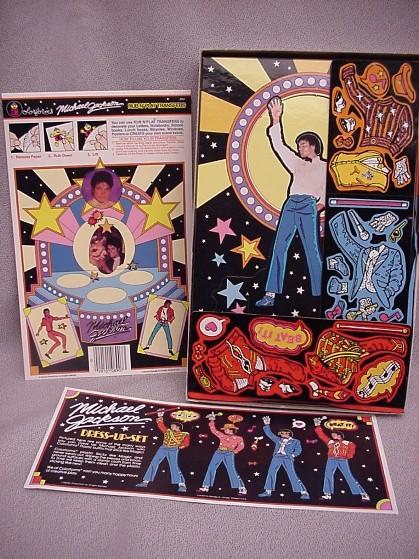 The default picture was this random shot of Michael with his eyes closed and one arm up in the air. I always thought it to be a bit peculiar. You could dress him up in any one of 4 outfits that just screamed 1980's. You could actually stand up the cardboard cut-out of Michael once you were done dressing him. There wasn't much to do beyond dressing Michael, this wasn't like some of the more action-oriented Colorforms where you could create stories from the pictures. Nonetheless, it was fun. 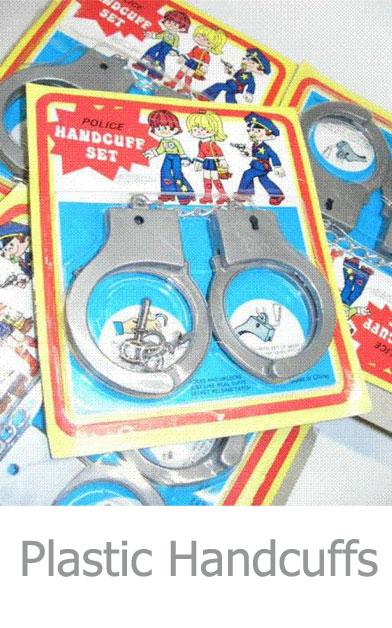 I went through probably 10-20 pairs of these plastic handcuffs as a kid. Whether you were playing "cops and crooks" or just plain cuffing your friends as a prank, these things were so much fun. Each pack of them came with two keys in case you lost one of them. My parents would always keep one key because I pretty much cuffed myself to things without knowing where my key was on a regular basis.

There were plastic and metal versions of these handcuffs, and we almost always would find them at the supermarket. We usually found a way to work a good pair of handcuffs into any pretend play we were engaged in. 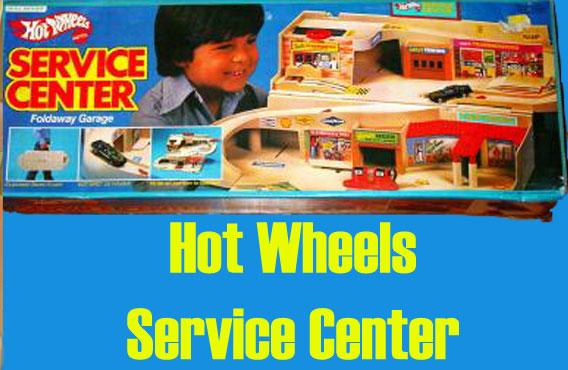 The Hot Wheels Service Center was a lot of fun. The ramp that ran throughout the playset could guide a car all the way from the top, down to the bottom, through a switch that rang a bell, and just in time to fill up on some pretend gas. There were all sorts of service related things your car could theoretically have done here. 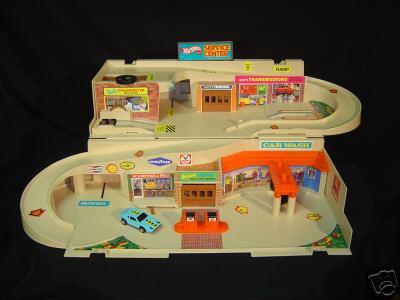 Some of the authentic stickers, such as the Shell sticker you see, really added to the experience. You could run your car through the car wash in the bottom right with the turn of those two little knobs. By far, my favorite part of this playset were the little areas where you could hide your cars. The garages were great for storing cars, as were some of the areas under the ramp on both levels.
If I remember correctly, this was released back when toys didn't already come with stickers on them, you had to apply each one of these yourself. Looks like alot of stickers! The whole thing folded up nicely and could be carried with the handle seen at the top. A great set for playing with toy cars, I know I spent hours making up stuff with this set. 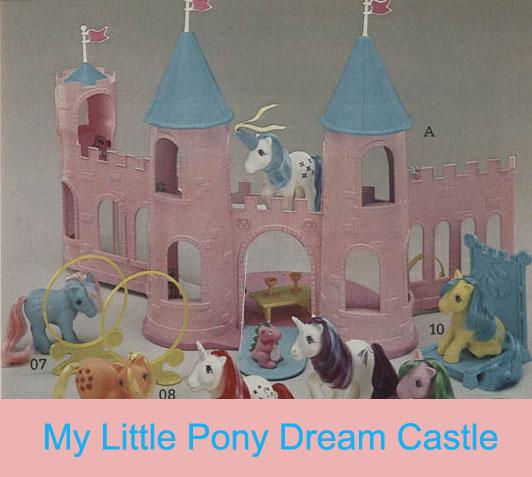 There are some toys of my youth that I refer to as "guilty pleasures". One of them is the My Little Pony Dream Castle. I must say, I did not own this particular item, it belonged to my sister. Sometimes I would just join her while she played with this. I can't pinpoint exactly why I liked this, but I would guess that it was because the castle was just so big and it seemed like my imagination could run wild with it. 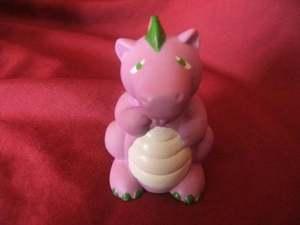 That being said, there wasn't a whole lot that a Little Pony could do there. A Little Pony could jump through hoops, sit on a throne, or perhaps drink from some goblets. That about summed it up. To retain some sense of masculinity, I was always holding on to Spike the Dragon (seen above).

My Dog Has Fleas 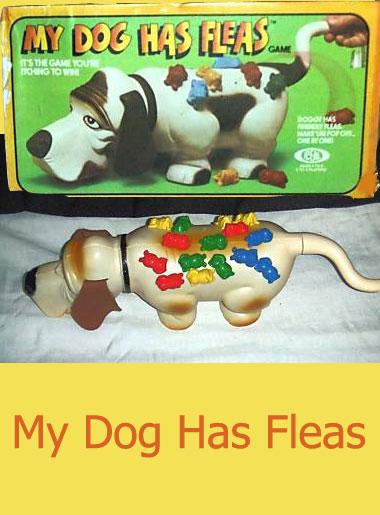 After "My Cat Has Bloody Stool" turned out not to be such a great success, this quirky game came along and satisfied the insatiable "sick pet games" market. Each player would take turns putting a flea on the dog and turning the tail. After you turned the tail, either a flea (or fleas) would pop off or they wouldn't. Whatever fleas popped off, you had to keep them. The first player to get rid of their fleas was the winner. Think Hot Potato, just nowhere near as interesting.

This was our go-to game when we were bored. It was a last resort because the game was just not fun! But it was always "there", it was always "around". The mediocrity is striking. For better or worse though, these are the things I remember. 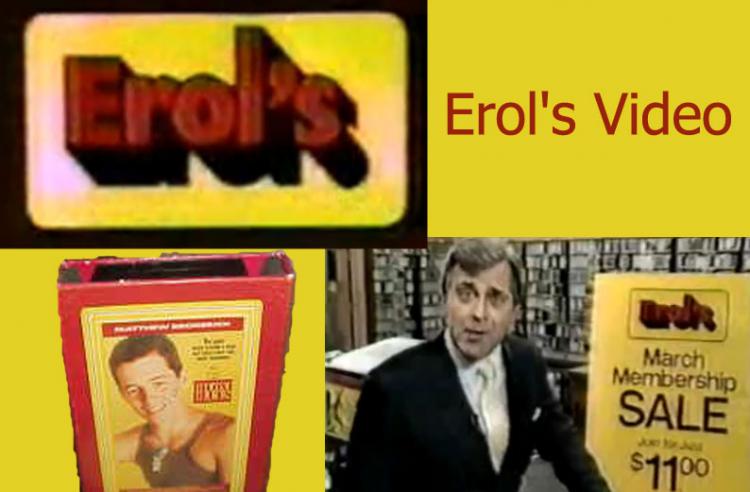 Now I know that Erol's probably wasn't a national chain, so some of you may not know what this is. For those people, I'd say to use this opportunity to solemnly remember your own home video store from back in the day. For those of us in the Greater Washington area, Erol's video was the main place in town to rent VHS
tapes.

Now you have to remember, VHS was really popular and new at the time and people were just getting used to this idea of "watching movies at home". So it was common practice to have to show some proof of Erol's membership upon entering the store, you couldn't just waltz in! Then when you did rent something, you couldn't walk out the door with it. Instead, they ran it down a chute to you when you got outside the store. 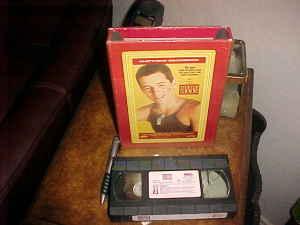 You remember the big red Erol's boxes they used to put the VHS tapes in? They roughly doubled the size of the VHS tape. Another theft deterrent perhaps? Erol's always had that big beautiful wall of NES titles as well. NES games were like $50-$80 to buy at the time, so you can bet that a fair amount of renting went on.

In 1990, Erol's was bought by Blockbuster. And thus, it was the end of one era and the beginning of another. 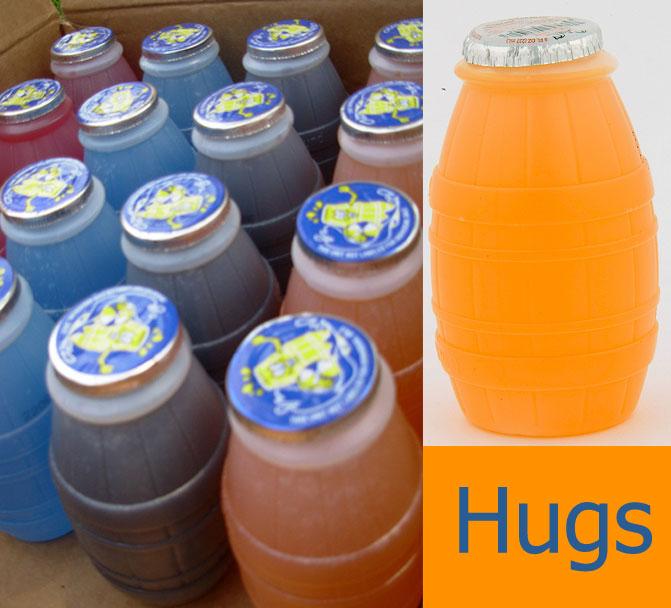 For the rest of my life, I will always associate the late summer with thoughts of heading back to school. As such, the Hugs drinks (also sometimes known as "Little Hugs") just popped into my head. It is fairly silly, but I can remember a time when any kid who had Hugs in their lunchbox was the luckiest kid in the cafeteria. Hugs were like gold, you would dream of having an unlimited supply of all the flavors. I don't know if it was because the container was shaped different or what, but this was just a very desired drink for kids. 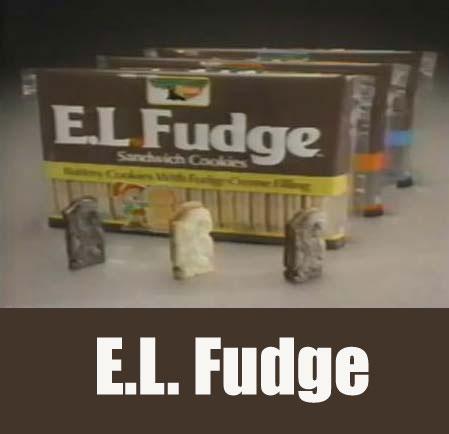 Oh wow, I love love love E.L. Fudge. I realize these things are still sold today, but it doesn't seem like they get much marketing attention anymore. I remember when they were brand new, and it's those original E.L. Fudge cookies we're remembering today. I love the big brown packaging seen above. Do they still make the chocolate E.L. Fudge? All I see are the regular ones anymore. 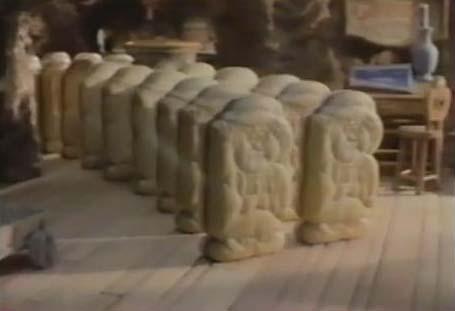 There's just something about the idea of these elves in a tree working so hard to make treats for me. I don't know, it enhanced the enjoyment of those cookies to imagine the little guys toiling endlessly with no breaks just churning out cookie after cookie. 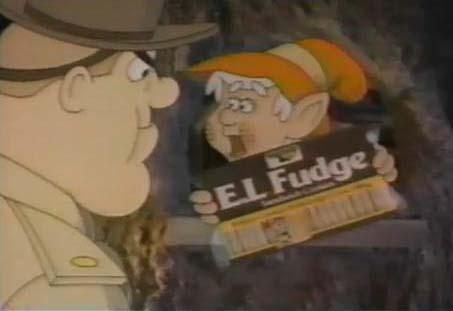 Excuse me sir, do you have a permit to bake cookies in this tree?

How bout old Ernie Keebler? What I want to know is, what kind of a raging egomaniac do you have to be to fashion a cookie cast in your own image? 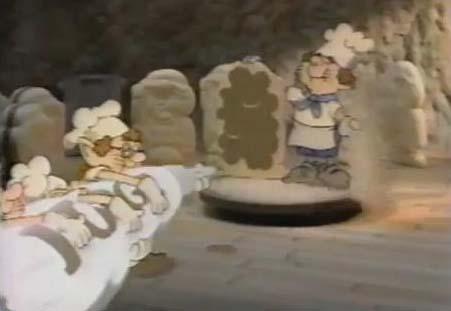 The elves reveal the jaw-dropping secrets of cookie making

There was a day when this was a pretty standard snack for me. But nowadays, every time I glance at the fat content on the back, I end up putting it right back on the store shelf. In just ONE little E.L. Fudge cookie, you get 90 calories and 3.5 grams of fat (1.5 saturated)! Sure, I wasn't expecting to use E.L. Fudge cookies as a supplement to Sweatin' With The Oldies, but c'mon!

Alright folks, I've blabbed on for long enough. Hope you enjoyed it, expect the next one in the fall!
35
Login To Vote!
More Articles From Spencer 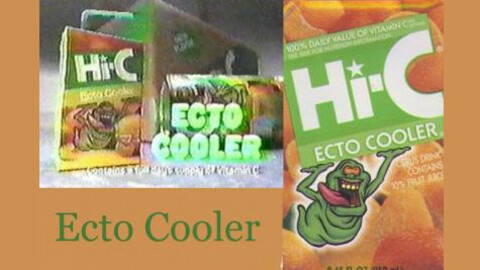