Ecto Cooler, Pound Puppies, Uforce, and More!
By Spencer
On 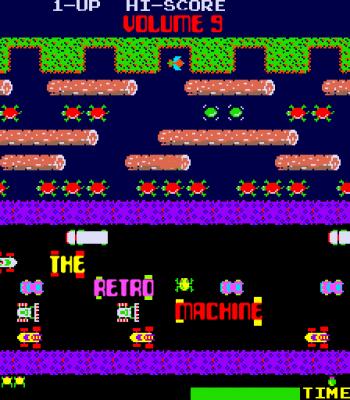 Careful little frog, for while you may be able to scamper quickly by some of these memories, I assure you that there will be others that may flatten you like a truck! 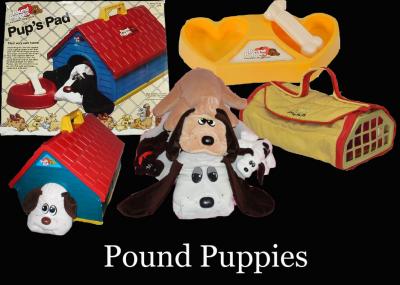 Throughout history, crazes come and crazes go. One that sticks out to me due to its appeal to both girls and boys were the Pound Puppies. The whole idea was that you were adopting these cute dogs and taking them home to care for them. It satisfied a nurturing feeling that kids have without mom and dad having to go out and actually save a real dogs life from the pound. Pound Puppies were made to be all vulnerable looking, what with those sad eyes and giant floppy ears. The smaller ones came in what amounts to a caged velcro tomb where you would store them when not in use. But for me, the creme de la creme for Pound Puppies was the famous "Pups Pad", a red and blue doghouse complete with food bowl and even a bone.

There was one particular Christmas where every kid in my family got a Pups Pad house for our Pound Puppies. The thing came with stickers that you'd use to spell whatever you had named your dog. When you shut the doors on the Pups Pad, your dogs head would stick through as if you had banished your pet to the stocks! Ultimately though, we soon realized that there wasn't a whole heck of a lot you could do with a Pound Puppy other than look at it and occasionally pretend it might fetch that bone. As a result, one day mine went in the dog house and really never came out again. 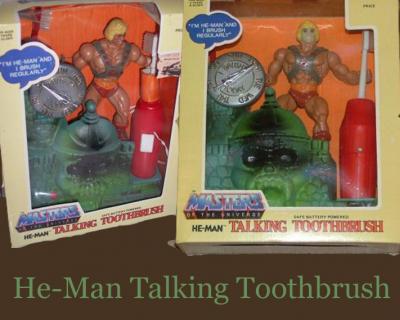 The toothbrushes that came with this set were basic and horrible, but who cares? It was He-Man! He was standing with Castle Greyskull and the toothbrush was powered by batteries, so how cool is that? If you pressed the little red button, He-Man would say:

"Hi, I'm He-man!
I'm strong as can be,
and I brush my teeth with regularity!
Once in the morning,
and once at bed time,
and after each meal,
so my teeth will shine!
You'll remember this saying if you rehearse,
and you'll be like the Masters of the Universe!"

Well my gosh, if that doesn't motivate a kid to brush their teeth then nothing will. He-Man himself giving you a lesson in dental hygiene! I'm pretty sure I never saw him brush his teeth during the cartoon, but never the less this little piece was cool to have sitting next to your bathroom sink. 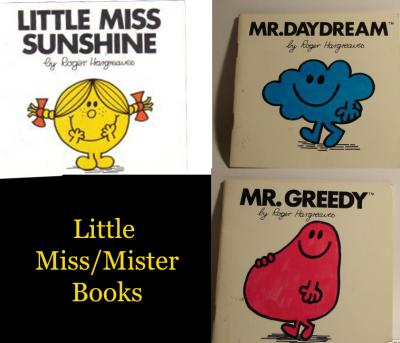 The “Little Miss” and “Mr. Men” series of books by Roger Hargreaves were a great addition to any kids library. Each story would showcase a character from that world like “Little Miss Sunshine” or “Mr. Messy” and whatever quality they had would be used to demonstrate some kind of moral lesson. Aside from the fact that these books were charming, my favorite thing about them was that they were just so collectible. They were tiny square books, cheap, and there were so many of them that you just felt the need to have as many as you could. Maybe that was just the “Mr. Greedy” side of me coming out, but I had a respectable stack of these. I just wish I knew whatever happened to them since I’d like to pass them on to my daughter! 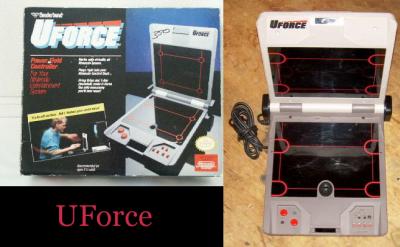 The idea behind the Uforce controller for the Nintendo Entertainment System was quite ambitious and futuristic. The execution however was absolutely lacking. The idea behind it was that you’d have it open while playing and you would be the controller. A wave of your hand would make Mario jump or Little Mac punch (or at least, was supposed to). The reality was that you just ended up looking like a moron, flailing your hands around and having very little success at making anything happen in the game when you wanted it to. My Uforce was used several times unsuccessfully until I just stopped using it and eventually got rid of it. Little did I know though that the idea behind Uforce, motion control, would actually be done and done well with the Wii, just 17 years later. So the Uforce was ahead of its time and it really reminds me that even though we currently live in the present, we shouldn’t forget that we also live in the future we once dreamed of. 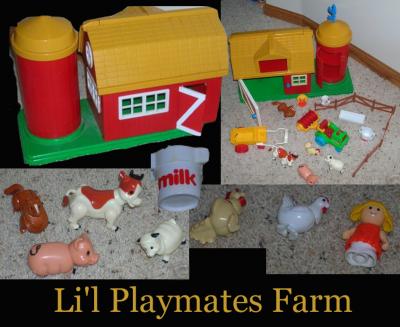 Most kids had the Fisher Price Little People Farm. My farm play set growing up was the “Li’l Playmates Farm”, an item sold by Sears. It was still a pretty neat little farm set and I got a lot of enjoyment out of it. Of all the items that have ever appeared on The Retro Machine, the Li’l Playmates Farm was one of the toughest finds (mainly because, like most things I struggle to find, I couldn’t remember the name of the thing!). It's probably best that I couldn't remember the name, just Google "Playmates Farm" and you're likely to turn up this toy and a bunch of other stuff that has nothing to do with a children's toy. But it’s these finds that are really the most rewarding, I really enjoy finding the more obscure things. As years went on, the many pieces that came with this set became scattered around my house. The farm itself was sold at a yard sale in 1989. 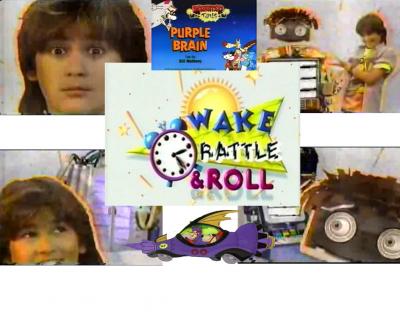 So how many of you folks spent your mornings with D.E.C.K.S. and Sam in the basement? There was always some story going on and usually it revolved around things Sam’s grandfather would invent. The “People Processor” in their basement would often spit out historical figures or teleport famous people into the basement. The first half of the show would feature a cartoon called “Monster Tails” which I don’t remember much about except that it was a decent show with a group of monsters that lived together, done Hanna-Barbara style. Later on in the show, another cartoon called the “Fender Bender 500” would come on. Every episode of this short featured a race between several Hanna-Barbara characters who each had their own customized racecar. Dick Dastardly and his dog Muttley were always cheating to try and win, but they almost always failed (but did actually win a few times!).
D.E.C.K.S. was a robot who appeared to have a VHS tape for a head and he talked with that “surfer dude” accent that so many shows of the late 80’s and early 90’s were fond of. Just think of it, most every TV and game show had a guy who talked like a surfer dude! It was so “cool” and “hip” back then I guess. Looking back, it is awfully dated.

It became “Jump, Rattle, and Roll” soon after when it moved to the Disney Channel, but I had outgrown it by then. Nonetheless, I have fond memories of spending sleepy-eyed mornings drinking chocolate milk and watching this before school. 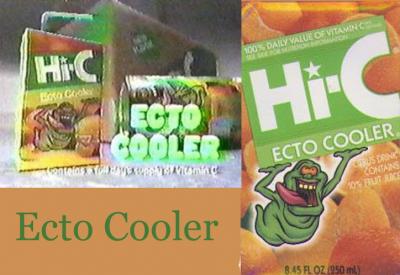 If ever there was a drink sent from heaven, this was it. There was nothing quite like pouring yourself a tall glass of this light-green concoction and throwing some ice cubes in to keep it perfectly chilled. Kids in my day loved Hi-C, but they loved Ecto Cooler. That amazing taste combined with the Ghostbusters theme basically gave the manufacturer a license to print money. We might have started out using the “sip-up” version, but pretty soon we were asking mom and dad for the “giant tub” version. Without a doubt this is one of the most oft-revered flavors of Hi-C ever and it’s cult status only rivals that of Kool Aid’s “Purplesaurus Rex”. At the supermarket, there was a time when buying Ecto Cooler was as much a staple as buying a loaf of bread.

Though there are a few flavors today that resemble this most famous flavor, true Ecto Cooler has long since been lost to the ages. Perhaps if Ghostbusters were to make a comeback we might see this again, but for now we only have our memories and a little piece of hope that maybe one day this drink will once again make us “feel so funky”.

Get In Shape Girl 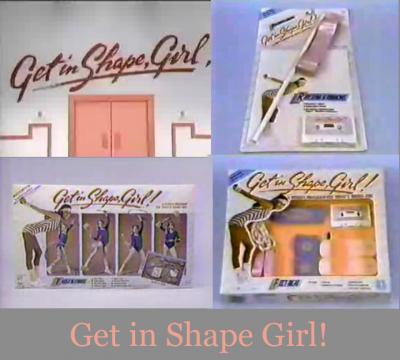 Around the early to mid 1980’s, Hasbro decided that society wasn’t encouraging eating disorders and dysfunctional body images early enough in our children’s lives. And so, it released the curtly titled toy line “Get In Shape Girl!”. Now, I’m not entirely certain that one can “get in shape” by twirling batons, waving long ribbons around, or strapping cute pink pieces of rubber to their ankles, but doggonit those commercials certainly showed a lively group of young girls doing just that!

There were a variety of sets you could buy that came with their own cassette tape so you could take your baton and “twirl, twirl, twirl”. The really unlucky girls would get the “Get In Shape Girl” book that revealed to you what your weight “should be”. Judging from the commercials though, it seems little girls were more interested in looking like Jane Fonda than they were about “getting in shape”. It’s a mess, headbands, leg warmers, and spandex everywhere. 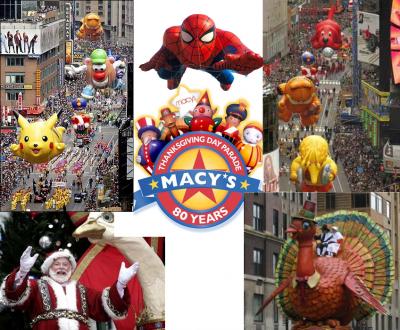 Traditions can be very “retro” because they tend to remind us of the past as we observe them in the present. We may take measure of what we’ve gained, what we’ve learned, what we’ve lost, and what we may have forgotten in the course of observing an annual tradition. For many of us, the Macy’s Thanksgiving Day Parade is the only way to start off Thanksgiving Day. The parade itself is one bloated advertisement and lip-synced Broadway number after another, but it is also a time capsule of sorts, with each year representing whatever the best and brightest pop culture has to offer at the time. You can’t help but feel like a kid again as you watch Charlie Brown chase the elusive football towards Herald Square or Santa Claus usher in the official start of the holiday season. For me, it’s always a good time to share a pot of coffee and eat a breakfast so big that I won’t have to eat until the feast that evening. 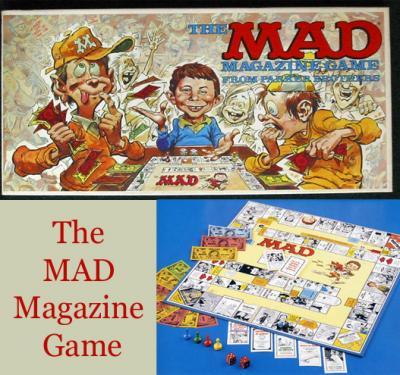 If the phrases “change chairs with anyone” or “stand up and boo the person to your left” mean anything to you, then you’re familiar with the Mad Magazine Game. Developed by Parker Brothers in the late 70’s, this classic aimed to parody Monopoly. However, the object of the game was to lose the most amount of money and each player began with $10,000. You’d do that by allowing the game to put you through a strange set of sequences set off by whatever space you landed on or the cards you could select. You may find yourself even having to switch money or seats with the other players! 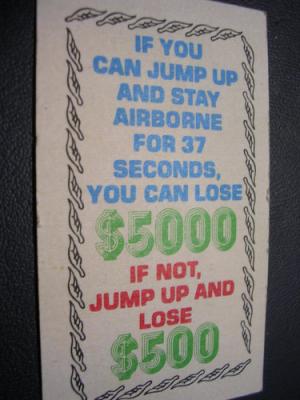 Was anyone ever successful in staying airborne that long? Nowadays, games like Cranium that make you get up and do wacky things are a dime a dozen. Back when the Mad Magazine Game came out though, it was a pretty novel idea to have to walk backwards around the table with a card on your head, hoping that you can lose a hundred dollars if it doesn’t fall off. 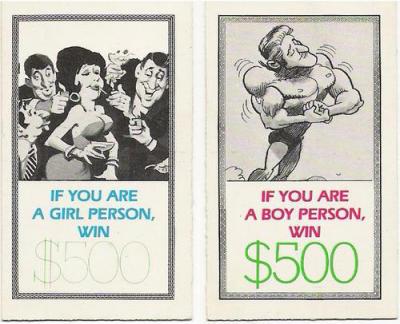 Whether you were a boy person or a girl person, you lost either way by winning $500.

My friends and I played this game pretty frequently, it was certainly one of the “go to” games due to its crazy sense of humor, cool artwork, and general unpredictability. To this day I still have it!

That does it for now, thanks for all your support and I'll see you in December with the 100th item!
50
Login To Vote!
More Articles From Spencer