Trek the US of A with B-A-R-B-I-E!
By aufdeutsch
On
Bust out those hot pink Corvettes, it’s time for another round of Girly Games. I know I said I’d do Superstar Dance Club #1 Hits for my next article, but the Barbie one called my name. Obviously, you must be saying, that Barbie games are girly games because they’re MEANT for girls. Yes, I know that. But the level of game play in this game…I honestly wonder what the creators were thinking (besides the equation Barbie + Popular Gaming Console = Big $$$$) because it’s terrible.


This Barbie game was a random find. These are all ROM shots from the ZSNES emulator for macs. I don’t know what inspired me to get this and actually play it….but I have. I have played it when I get bored. There is no plot, no point, and some parts just flippin’ don’t make any sense. Guys, if you own this game…willingly…I applaud you. I don’t even know if I would own it. Girls, it’s Barbie. Either you hate it or love it because it’s so awful.


Let’s begin our trip with Barbie! I played on the “ABC” level instead of the “Mortarboard” level (aka graduation cap/gradute/etc) After selecting Start, you put your name in blah blah blah. Then you’re allowed to select where you want Barbie to go. I just noticed that there is nothing in the East Coast. Can’t Barbie go to Gettysburg or fishing for lobsters? Why Iowa? Why a county Fair in IOWA? (nothing against people who live or go to school in Iowa). 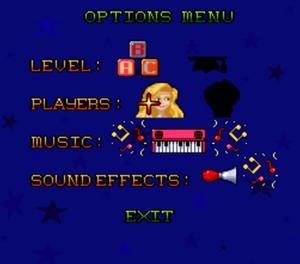 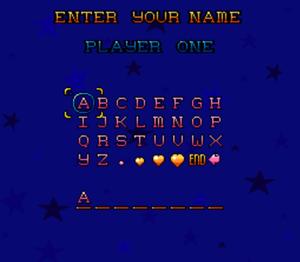 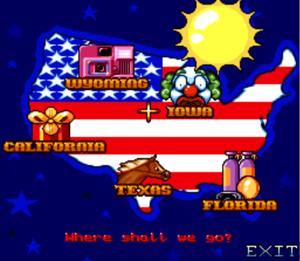 Barbie and I started our trek in Florida. Picked out the swimsuit color. Notice her one-piece suit MAGICALLY changes into a bikini once you start game play. Subtle? No. Somebody wasn’t paying attention to details…choices for this stage. Either play volleyball with Midge (and a giant ball) or go diving in an old pirate ship wreck. Midge cheats, so go diving. After you swim around and get stalked by fish the entire time…you find all the treasure and head back to the beach. Then that’s it. You did everything in Florida. So you leave and Barbie sends “you” a postcard saying what she did. Complete with a photo. Where she’s magically in a one piece suit again. 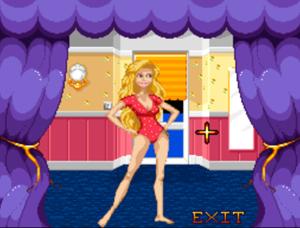 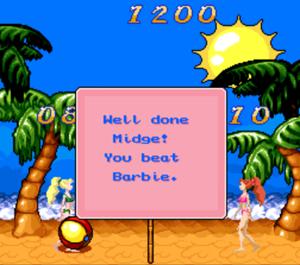 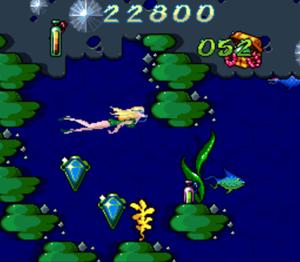 and now we're back to the one piece! 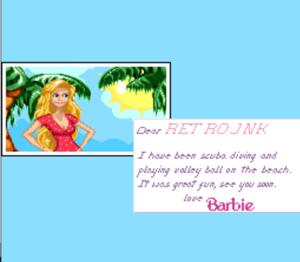 Honestly, I have NO idea what the scores are for. They don’t do anything. 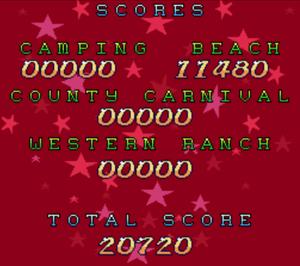 Now we’re trekking to Texas! Western ranch, here we come (after a change of clothes and color selection). Oh look….horses? We go riding. Now, since we’re on a Western ranch…you think maybe a cattle drive, or barrel racing…something very cowboy-esque. No. We go jumping. Not out in the fields or sand dunes or mountains. Show jumping. So we use an English saddle. If you know anything about horses, you could remotely tell the difference between a Western saddle (it has the big horn in the front, just think of cowboy movies) and an English saddle. Why would cowboys be riding English? Or doing show jumping? On a western ranch? (again, if you actually have a “western ranch” and do show jumping, this is nothing against you. Blame Barbie.) Personally, this is one of my more favorite levels because it can get hard if you hit the jumps…and I like horses. It’s one of the few perks in the game. After some intense riding, you get to play horseshoes. Still don’t get how to really get it close to the pole. Whatever. That’s all you do on the western ranch so another postcard from Barbie and we’re on our way! 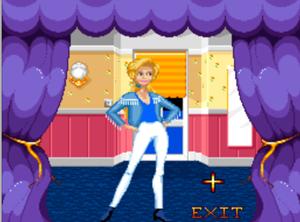 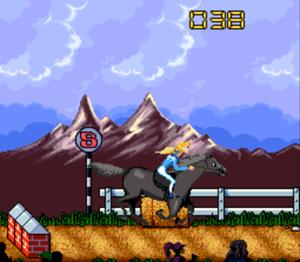 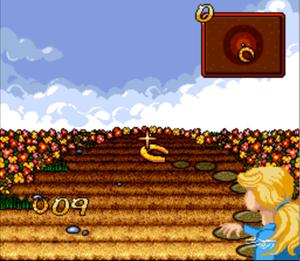 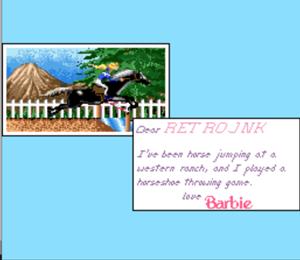 Next we’re going camping. I HATE this level/place. Pitch your tent, and your challenge is to jump across 10 streams…it takes like 10 minutes. Especially if you under jump and fall in the water. You have to start over from the FIRST stream. It makes you angry at the game really fast. I almost just gave up because it was annoying me, but in order to complete the article, I finished. Got rewarded with…taking pictures of forest animals. While Barbie just walked across the screen. Another postcard from Barbie and we’re on to the next destination. 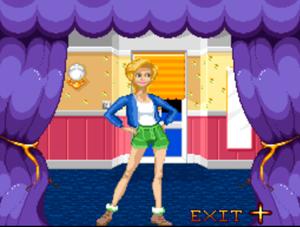 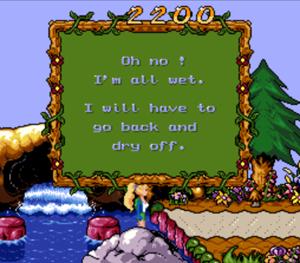 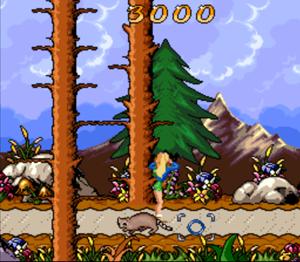 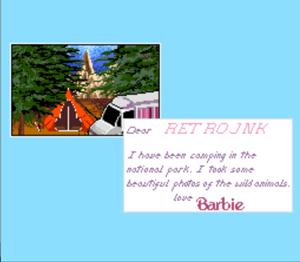 IOWA! Change of clothes…and we’re asked to hunt down a loose pig. Catch the pig, and you can finally play the carnival games. The pig follows you around now and oinks. I think that’s cute (only saving grace of this level). First up: knocking down the can towers. You’re given a lot of time…and once you get the 3 down you just sit there until it tells you to hit the bonus things. Yawn. Next game. Feed the Clown. Can be challenging, but again, Yawn. Last, test your strength. Yawn, yawn. Slightly challenging but nothing too big. Barbie drops us a line to show we’re more than just a pity friend and we head to the last stage. 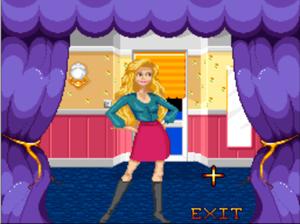 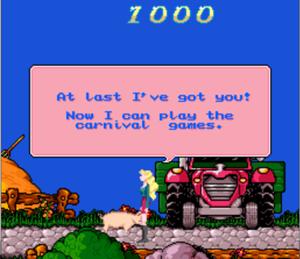 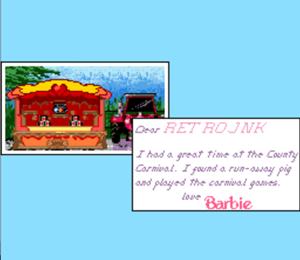 We’re home! Barbie has a surprise party waiting for her and she has to find her gifts. This level can be a pain if you’re on the “mortarboard” level. Search the house with Ken popping up every time you find a present and guess it correctly. 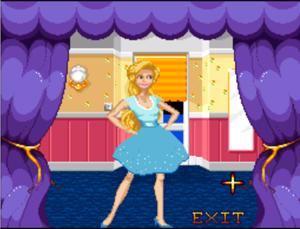 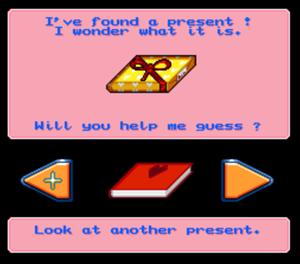 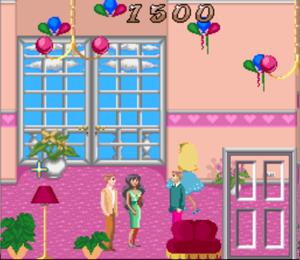 i'm sorry, but random people IN MY BEDROOM would piss me off. 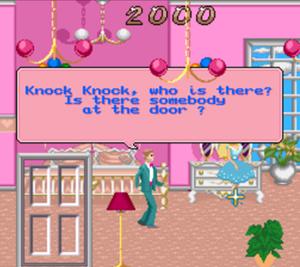 In the end, the big gift is outside. That’s the end. Nothing more, it just ENDS. 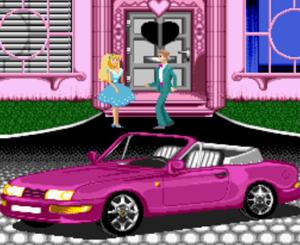 is it so wrong that i want to quote Aqua in saying "OH I love you KEN!"?!

Needless to say, Barbie games are girly. But this game is just terrible. For 6 year olds, fantastic! Me, bad. It falls into that “this game is so bad but yet I will still play it on occasion for some strange twisted reason” catagory. Sometimes when games are geared directly towards girls, they fall flat. Flat on their face after falling down 20+ flights of stairs. We can do things that require more thinking…and I’m sure the young kids that this was geared towards had enough mental capacity to get a better adventure than this.

I hope you enjoyed the article, and stay tuned for the next installment of girly games!
3
Login To Vote!
More Articles From aufdeutsch 18
Mistress9
Thank God I was a Little Girl!
A display of all the splendors of being a little girl in the 90s.
An unhandled error has occurred. Reload Dismiss