Deck the halls with Marvel Comics!

Here's a look at some classic subscriptions advertisements from Christmasses in the late '80s and early '90s.
By Daniel85
On 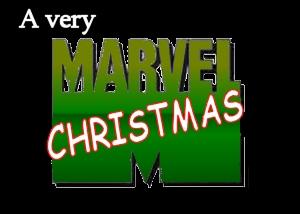 Whenever you buy a Marvel comic, you can be damn sure that somewhere near the back there'll be a full-page advertisement with a subscription order form for all of Marvel's titles. These days the subscription ads are pretty dull, with just a picture of whatever character is hot at the time (when the Hulk movie came out it was Hulk, and ever since then it's been Spiderman), but back in the '80s the House of Ideas really pulled out all the stops on the subs pages.

Some of the best (and worst- but in nostalgic terms isn't the worst often the best?) subscriptions advertisements were those that popped up in the lead-up to those magical Christmastimes of the '80s.

One thing you have to keep in mind is that the cover dates are all wrong, because ever since like the 1930s comics have been published months before the date on their covers. Don't ask me why. It was originally a three month delay, then four months, before some of the publishers tried to fix the problem in the '90s. My point here is that even though the issues from which these advertisements come are listed as around February or March, they really hit the stands in November or December of the previous years. You'll figure it out. Read on! 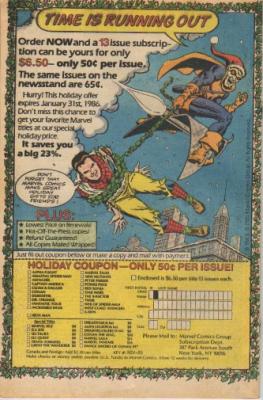 This is one of my favourite subscription pages ever (and that includes non Christmas-themed ones). The best subscription pages are the ones that give you some cool art, because it's almost like you're getting an extra page of comic instead of just another page count chewing advertisement.

What makes it even better is the Christmas imagery. Green Goblin in a Santa hat? Freakin' sweet. And I love how Spiderman, despite his dire situation, can still engage in that time-honoured Marvel tradition... characters doubling as soulless spruikers.

I mean, look at how perilous Spidey's position is. He's being dragged across the New York City skyline by a lasso of holly leaves, surely not the most robust of towing lines, plus his costume has been ripped away to reveal his secret identity! He's being paraded before the NYC populace as Peter Parker, and he's probably about to die, yet he still has time to adopt a salesman's grin and tell us all that Marvel's rags make great gifts. These are Spidey's last words?

At least the Green Goblin's speech bubble is kind of in-universe. 'Time is running out'? No shit, Osborn. That tenuous lifeline is about to snap, and Spidey won't be able to sling himself to safety cos he's too busy doing fucking jazz hands as part of his sales shtick. 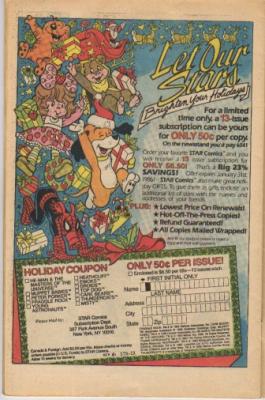 Here's another one from that same issue of Avengers, but without the tense drama of the last flight of Spiderman. It's for Star Comics, Marvel's failed kiddy line from the '80s. It always annoys me that Masters Of The Universe and Thundercats were part of the Star lineup. They just stick out like sore thumbs. Care Bears, Strawberry Shortcake, and Skeletor? Nuh-uh.

I don't know what the hell Peter Porker, the Spectacular Spider-ham is doing, but I guess he dropped his present. Christ, man, if Strawberry Shortcake and Heathcliff can hold onto their gifts, you'd think a pig possessed of arachnid powers could maintain a grip.

And check out that yellow parking cone filled with holiday trinkets next to Spider-ham there. What kind of parents are these? "Sorry kids, we can't afford stockings this year, what with your father's rampant drinking and all, but here are some parking cones he picked up on his stumble home from the pub last night. We'll stand those up against the fireplace on Christmas Eve". Yeah, and they'll fall into the fireplace and fill the house with toxic smoke, killing poor Timmy and Janey, you stupid whore! 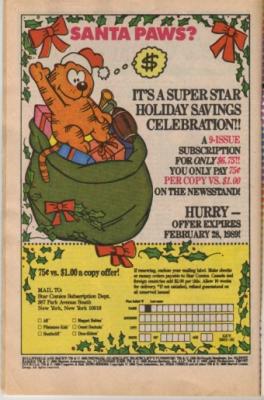 Here's another Star subscription page from three years later, and look how the line-up has dwindled! Heathcliff and the Muppet Babies are the only survivors from '85. It's pretty disappointing that the Muppet Babies weren't featured in either of the ads, and Heathcliff was in both of them. Perhaps they couldn't use the junior Muppets because of licensing issues, but still- Heathcliff? It's 1989, you want to sell something, you have Alf in your line-up, yet you choose Heathcliff? COME ON.

The rest of the line-up is pretty solid. The Flintstones Kids, nice. Probably the least predictable, yet somehow had-to-be-done of the babyizations of popular characters. And Dino-Riders, whew. This is the same as MOTU and Thundercats back in '86. Why put it under the kindergarten comics label? The Dino-Riders comic only lasted three issues, which is a shame, because it had some great stories. Even though it was published with the Star imprint, the stories weren't really kid-oriented. In the first issue, Questar is put on trial for the murder of a fellow Valorian, who later turns up alive and mutated into some kind of half dinosaur-half human thing looking like the Toxic Avenger.

I don't want to lecture here, but Dino-Riders has to be the biggest missed opportunity of the '80s. It could've been bigger than Transformers and GI Joe. I dunno if the timing was off, or the marketing approach was wrong, but it had everything going for it. What two things fascinate little boys more than space and dinosaurs? And there they were, together at last, like Homer Simpson's nuts and gum. Oh well. Que sera, 'ceratops.
Speaking of bad puns, I like the reticence with which whatever Harvard grad who wrote the copy for this ad put forward the main gag. "Santa Paws?" It's as if he knew it was a lame joke, but thought he'd try and pass it off anyway. I can imagine him kind of wincing as he typed it, then taking a swig of whisky from his SNL mug. Don't call them, dude, they'll call you. 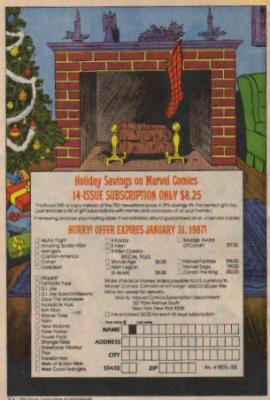 This is a nice, simple one. It's all Christmassy and Marvelly, with one leg of Spiderman's tights acting as a stocking. It's probably in Aunt May's living room, cos I guess Peter would go home for the holidays.

You really do have to wonder what would happen if there was some emergency on Christmas Eve that Spidey had to attend to, though. Peter would be pulling on the Spiderman suit, and his lower leg would appear out through the bottom of his truncated suit, and he'd be like 'Oh, yeah...' But it was the late '80s, so I guess he was wearing the symbiote suit from Secret Wars. Damn, that symbiote suit was cool.

I like how precise the Marvel numbercrunchers are with just how much readers will save by subscribing. A savings of 21%?! Shit, if it was only 20% I wouldn't have gone for it, but 21%? Deal! And notice how it's gone down since the 1985 subscription pages, from 23%. Damn economy. 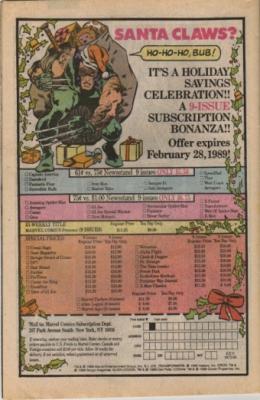 Agh! It's that same 'Santa Claws?' joke from the Star subscriptions page! At least Wolverine has more street cred than Heathcliff. It's the gritty Frank Miller version of Wolverine too, which is cool. Too bad that it kind of precipitated the downfall of comics in the 90s, when everyone was trying to do antiheros grittier than a Tang sandwich. 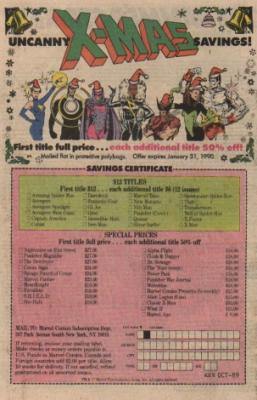 This subs page kicks ass. Uncanny X-Mas. Gold. The fact that they actually did it in the same font as the X-Men logo makes it even better. That's a pretty cool line-up of characters, too. You've got your stars like Wolverine, Colossus, and Storm, but then some second stringers like Havok and Scarlet Witch, and what the hell-- Dazzler? Dazzler is either the worst or the best X-Men character ever, I haven't decided yet. I'm just entranced by the supreme cheesiness of it all. If Jim Shooter left any legacy to Marvel after he vacated the Editor-in-Chief's chair, other than being remembered as a freaking insane ten foot tall manbear, it's Dazzler.

It's pretty dodgy how they've named the order form a 'Savings Certificate'. What a crock. Like you're gonna order your comics and then photocopy your 'certificate' and put it on your den wall next to your high school diploma and McDonald's Employee of the Month (August 1989). 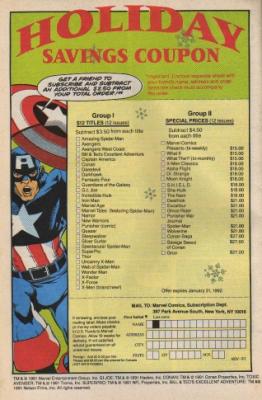 This one's from when Marvel decided to try and bring their cover dates back in line with reality, and date them a mere one month out of sync instead of three or four. They made such a huge friggin' deal out of it, it was even on the Bullpen Bulletins page and in Stan's Soapbox. And you know if shit is in Stan's Soapbox, it's a big deal.

You can tell this is from the '90s, because of the colossal freaking list of titles Marvel was pushing at the time. At one point in the early '90s there, they were putting out more than a hundred monthlies. Swear to god. In hindsight, it's kind of funny to look at what they were doing in those days when you know that by the end of that decade they'd be filing for bankruptcy.

You can also see from this page the move from more whimsical, interesting advertisements to just a plain checklist with a dull rendering of some popular character thrown in. There's absolutely no pretense of Captain America being in any kind of comic-book situation. He's simply there to tell you to buy comics. Cap's pretty serious about it too, from the way he's charging right outta the page at you, about to rip your head off with his shield.

That about wraps up it (har, har) for this article. Have a good Christmas, y'all, and don't forget-- Marvel comics make great holiday gifts for your friends! For god's sake, don't forget it.
1
Login To Vote!
More Articles From Daniel85 8
Quote O' Matic
Tinkerbell: "*after breaking house and growing huge* Oh, dear me! I did it! -Tinkerbell"
Hook