Looking further into some more dumb stuff that scared me back then
By Benjanime
On
With Halloween already at a close, I thought I'd mention more television/movie/video game moments that actually scared me. Ladies and gents, it's time for... 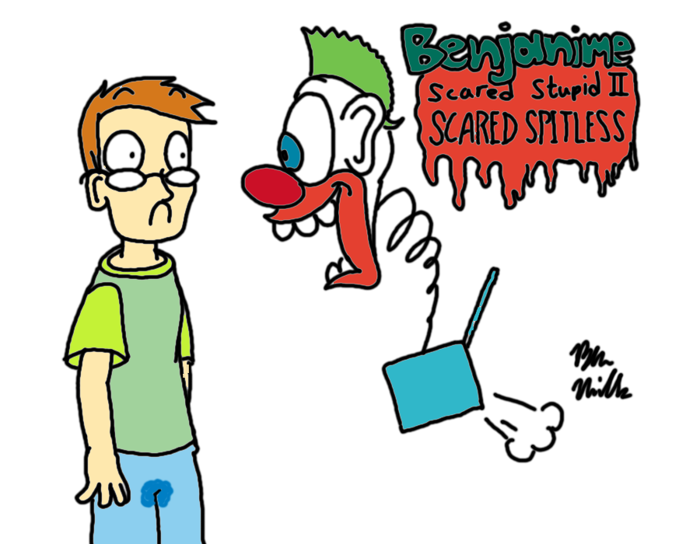 Dexter's Laboratory is among one of my favorite shows from the classic Cartoon Network lineup, but to my surprise there was a certain episode, while not aired much, that had parodied Chuck E. Cheese in which the name was also parodied as "Chubby Cheese". In a certain scene we see the washed up machine puppet sing like a drag queen to the audience...

Not that it seemed like that big of a deal, but it was mostly Chubby's head spinning in close-up that creeped me out.


This next one is a shorty, as it's a hidden picture found in Sonic CD. After fiddling around in the sound test, you'll come across a few different pictures of Sonic, but one in particular just sticks out like a sore thumb. It's a tiled background of a disgusting human-faced Sonic with some haunting japanese font, but I'll let you find that out for yourself in what it says. Just seeing the picture with the American version of Robotnik's theme playing alongside it was scary enough.


I never really watched a lot of live action kids shows back then, as my main focus was cartoons, although I was a bit overwhelmed in horror after seeing the creepy bastard known as Noseybonk. I was at Sunday School one morning at church when we needed to pass the time as we'd already gotten everything out of the way, and we didn't have any board games to play as the backroom that we stayed at was getting renovated. So one of the fathers borrowed the AV room T.V., and everyone soon became traumatized at the guy's ugly looking mug.

But at least it's only a maaaask.... moving on.


When I grew up with the Looney Tunes (whether it was on Nickelodeon or Cartoon Network) I thought that it was a nice treat in seeing some revival of the characters as the decades moved along. Taz, though only a minor character in the originals, got his own show and we even got to see some new shorts. I was fond of a lot of them, except one, being a Bugs Bunny short titled "Invasion of the Bunny Snatchers".

The focus on this is not only a parody of "Invasion of the Body Snatchers" but a very creepy and dark tone to a Looney Tunes short. The Elmer and Yosemite Sam clones are fine and dandy to look at, but the Daffy clone, with his demented moving mouth-changing left me without words as well as the Porky Pig robot-thing after the credits... This is quite possibly the first and only Looney Tunes related short that left me without laughs, even to this day.
Ah, game over screens. That point in time when you've struck out in all of your lives in a video game and have to start aaaaaall over. At the youthful age of 9, I didn't have much experience in games when Donkey Kong Country 2 was out, but this screen in particular.... Oh man, did it leave me with a fright.

I was afraid of losing to this game when playing late at night and I focused on going to already-beaten levels just to stock up on plenty of lives so I wouldn't have to look at that dreadful red transitioning screen.


Speaking of video games, I've been needing my fix of classic pc games. While I still remember a few that used to be on my mom's good ol' Windows 95 eMachines computer, one caught my eye that I'd hoped to forget, but kept coming back to me from its strange imagery, the title being Darkseed. And the plot of this game is that you play as a man named Mike that has a nightmare that he's been implanted with an alien egg in his head. Mike finds out that the implant was real, and he has three days to get it out of his head. After a day passes, you get two, count 'em, two, nightmare sequences before another day arises.

And the icing on the cake is that if you don't beat the game within day three, THIS happens

I'm thankful that I haven't played the sequel though, because it's so laughably bad. And the end to this game is similar to that trend.


And I'm sure that many of you can relate to this one. It's that infamous scene from Who Framed Roger Rabbit in which a cartoon shoe gets dipped in, well, DIP.

Now when I look at it I just feel all saddened inside :\


Well fellas, I hope you enjoyed part two of this series. I might just consider doing a part three, if I have some time on my hands. Take care and have a great Thanksgiving!
4
Login To Vote!
More Articles From Benjanime