Splatterhosue was a strange franchise, but one of the games stands out as overly werid
By Baburu
On
In 1988 horror movie fans were met with the ultimate fan service, a video game paying homage to the movies they love. And not some crap like Friday the 13th either, this was bigger and bloodier, this was Splatterhouse. Produced by Namco and released to arcades Splatterhouse was an instant success. You took control of Rick, as he had to go throughout a possessed house fighting demons and possessed furniture all in an effort to save the woman you love. The game was soon ported to the TurboGrafx-16 and spawned two sequels both released on the Sega Genesis, but before these sequels ever came to be a side story title in the series was released, and even for a Splatterhouse title, it was one weird game. 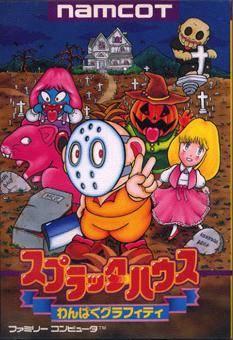 Splatterhouse: Wanpaku Graffiti (Naughty Graffiti) was released in 1989 on the Nintendo Famicom as a sort of sequel to the arcade game. Since Nintendo had very stick policies on the use of things like blood and gore, Namco toned it down and made a very different game. For starters, the characters in the game are done in a style known as super deformed. To put it in American terms, they were made all cutsie. Rick is now a machete carrying midget, but just as bad ass as ever. The games into is similar to that of Ghost N Goblins, and by that I mean we start with a girl in a graveyard who is then kidnapped by demons, in this case a guy with a pumpkin head but not the demon from the Lance Hendrickson film. 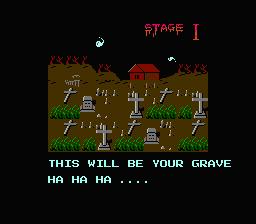 Wait, they brought you back from the dead so that they could kill you all over again?

Something about the cut scenes always intrigued me, why does a game only released in Japan have all the text in English, or in this case Engrish? In fact, the game is plagued with it, one of the best lines of which is "BE GARBAGE OF CESSPOOL HA HA HA...."

Unlike the previous entry In the series this Splatterhouse doesn't take itself seriously, as is event from the start. The First boss you fight is a Vampire, who comes out, dances a great parody of Michael Jacksons Thriller, and then proceeds to attack you. Later on you fight a sleeping girl who has spiders bursting out of her, after killing all the spiders she wakes up as if nothing at all happened. 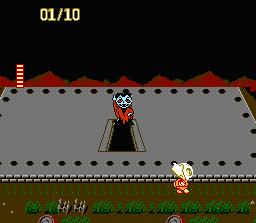 is he flipping me off? 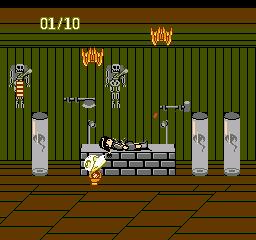 sleeping beauity shes not
Sadly, Rick has only two weapons in this installment, his machete, which he has from the start, and a shotgun he can find later. You may miss splattering zombies against the wall with a 2x4 but dont let that turn you away, Wanpaku Graffiti is a great installment in the franchise and despite its limitations you are sure to love it and the game makes up for this in other areas. 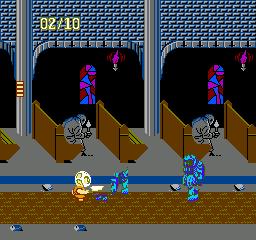 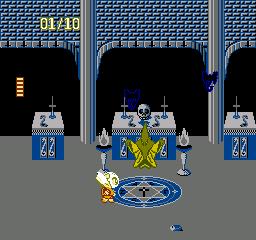 New to the series is an experience bar. The more enemies you kill the more experience you get, and as you level you get more hit points. There is also a password system allowing you to visit any level, but doing this will start you with the standard 3 HPs so you may not want to start to far in the game. There are also hidden levels that take place all over the world such as Egypt. 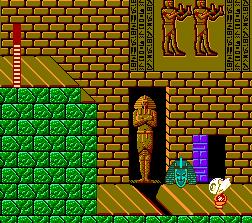 "I must hurry back through the Stargate"

The ending to the game is very different from the other three. If you don't want to know, skip this paragraph, if you don't care since its an import game and will likely never play it anyway, here it is. After killing old pumpkin head it is revealed the whole game was nothing more then the making of a movie. The director congratulates Rock on a job well done and he takes off the mask and Rick and the others leave the set. Then, the Terror Mask comes to life, but it was all just a movieâ€¦wasnt it?

Over all Splatterhouse: Wanpaku Graffitti is an awsome little title that stands out. Even the cart is taller then most Famicom game cart. I walk by it and its as if its beckoning me to come. Play. And I almost always give in because its that fun, even if it is a bit strange, and thats saying something since its a Splatterhouse title.

Hope youve enjoyed reading this installment of Weird Gaming as much as I have writing it, and playing the game for refreshed reference. Join me next time when well find out...oh right, as if Id spoil the surprise. Untill then gamers, stay weird. 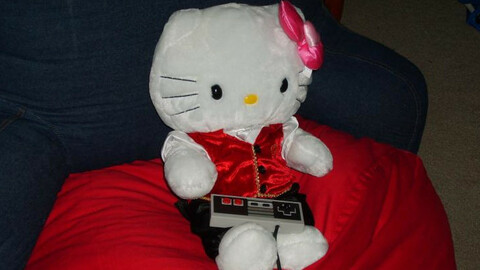