I am a nerd. If you had one ore more of these toys, you may be a nerd too. Join us.
By ccavera
On
From Wikipedia: “Nerd, as a stereotypical or archetypal designation, refers to somebody who pursues academic and intellectual interests, which may result in the expense of social skills such as: interpersonal communication, fashion, hygiene and physical fitness.”

Yep, that’s me. Here are some cool nerd-toys from my youth.

This electronic handheld game actually came out in the late 70’s. I always thought it looked like a red cordless phone from the future. With this simple device you could play TicTacToe, Music Machine, Echo, Blackjack, Magic Square, and Mindbender. I spent most of my time playing Magic Square and TicTacToe. The construction of the thing forced you to use a bit of imagination. No cool graphics, just blinking red lights and simple beeping sounds. This was true for most electronic games back then. With Music Machine, you could program Merlin to playback songs. In fact the manual provided instructions for programming different cheesy folk songs that you would find in any beginners piano book. Some will claim that this was the first music sequencer available to the general public. You can usually find them on Ebay for around $10. Kids today would probably dismiss this device as instantly lame, but I thought it was neat. 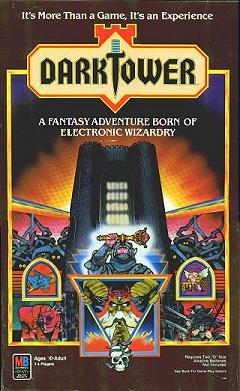 This board game came out during the heyday of Dungeons and Dragons. It was a little friendlier for kids like me who didn’t have enough patience to go through all the reading, dice throwing, character designing and whatnot associated with D&D. There was a large circular game-board/map that was divided into four territories. Each territory had little plastic buildings and a little plastic warrior controlled by one of four players. In the middle of the board stood the Dark Tower. The tower itself was a cool device. It contained a backlit, rotating carousel with pictures on it. It pretty much determined your fate as you made your way around the board looking for keys to unlock the tower and face the final battle. Apparently these games are collectable and go for over $100 on Ebay.
Robotix (Bront-1500, Argus-2000) 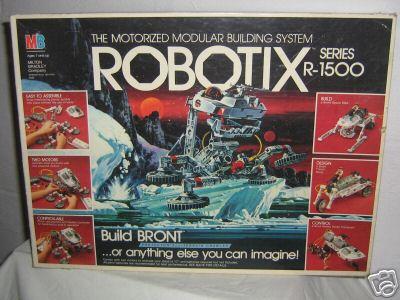 These were boxes of plastic parts that would fit together to form a predetermined Robot. Little motors would attach to a wire controller and perform various actions like turning wheels, steering, opening and closing hands and jaws, or operating a winch. There were elaborate instructions for building the main robot, and you were encouraged to create your own designs. I had three different sets and would combine them to build bigger robots. The head of Argus had a motor in it that would open and close the jaw. It hurt if you closed it on you finger. This was cool because it meant that my toy could potentially cause some real damage! 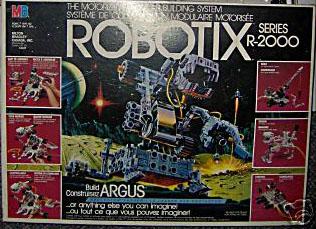 As with most of these construction-type toy sets, I always needed just one more part to create my masterpiece. Each set came with an action figure in the stiff-limbed Star Wars style. There was a cartoon for a while that I remember enjoying. It was obviously done by the same people who brought us G.I. Joe and Transformers (Sunbow). 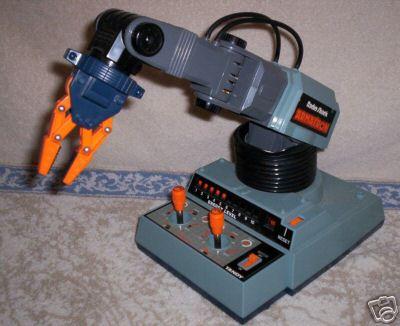 The thing was awesome in the store, but lacked replay value at home. I had visions of handling hazardous materials like plutonium and other explosives, but ended up moving around the “Globe Modules” (little plastic balls) that came with it. You could also pick up and torture G.I. Joes if desired. It had two joysticks for positioning the arm and you could also twist them to rotate and then open or close the hand. 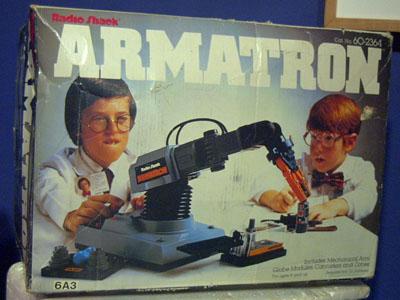 The thing was loud. You’d switch it on and it would shake the table just sitting idle. I took it apart to unlock its secrets and ended up with a giant pile of parts. The picture says it all…I think I was the dork on the right. 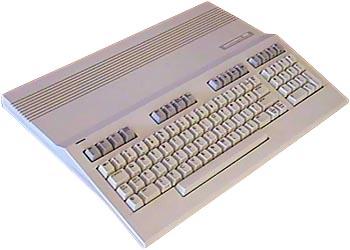 This deserves it's own article, but here’s a little about this classic computer. After purchasing the Atari 2600, my parents said that they would never buy another “game machine”. Enter the Commodore 128. The 128 was 2 computers in one. You could flip it on whilst holding down the Commodore button and it would boot up in “64 mode”. Or you could use it in 128 Mode and do more advanced stuff (which I rarely did). Supposedly there are games out there that take advantage of 128 Mode (that’s 128k of RAM) but I never saw any. It was nice letting my nerd friends know that my computer was “twice as good” as their puny 64s, but otherwise it was pretty much a more aerodynamic 64. 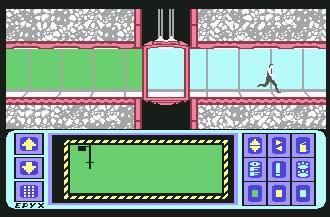 If your folks were anything like mine, the Commodore 64/128 was the perfect game machine for a variety of reasons:

- You could argue that it was “for school” and my school did in fact use them.
- You could tell the folks that they could do grownup stuff with them like pay the bills and stuff (this of course never happened).
- There were a million games and you could copy them using a program called Fast Hackem’.
- You could use your leftover Atari joysticks.
- You could use a thing called a MODEM and hack into military computers to obtain secret launch codes. 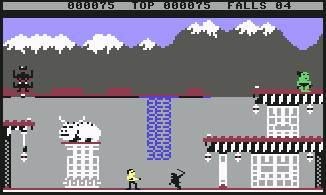 When the NES and Sega Master system hit the scene they pretty much blew the Commodore out of the water as far as games were concerned. But the thing has held it’s own over the years. I still have my Commodore 128 in the basement hooked up and ready for action along side the Atari, the NES, a Genesis, and the PS2. There are several emulators out there that are good. Try www.zophar.net for all your emulation needs.

One of the cool things about being a grown-up is that you go on Ebay and buy all the cool toys that your parents wouldn’t get for you. Go ahead and buy them for your kids…everyone will be happy!
3
Login To Vote!
More Articles From ccavera 19
ccavera
80s Ninja Games
A look back at some Ninja games for the C64 and Arcade. 2
ccavera
Impossible Mission
One amazing game for the Commodore 64

19
ccavera
80s Ninja Games
A look back at some Ninja games for the C64 and Arcade.

34
LuckyHawk
My life of Gaming
A love and hate affair.
An unhandled error has occurred. Reload Dismiss