Remember When The Elementary School Playground Is Where Life Happened?
By MelloMovieReview
On
Pure
Playground
Imagination 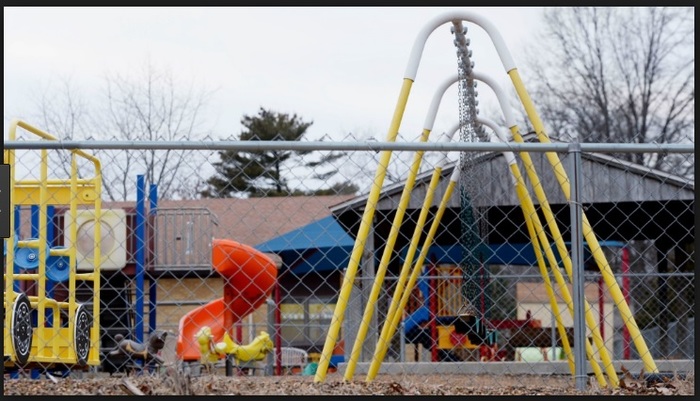 The cool breeze touches my skin as I peel away my warm socks. The sting of static electricity zaps my thumb as my hand slides down the chain link straps attaching my rectangular rubber seat to the steel bar above my head. My exposed toes dig into the sand beneath my body as I prepare to push my weight forward. I bend my knees, hold on to the chains with a tight grip and throw my body straight up! The momentum of the swing pushes me forward as I drop and my head dips back. As the swing continues to rock my body back and forth I stare at the sky above me. The clouds are perfect, the breeze is just right, and for a brief moment in time… I am a kid again.


This is something I used to do almost every day as a kid in elementary school. Recess was the most epic time of my life. For thirty minutes every day I could be anything I wanted to be, go on any adventure I chose, or at the very least… just have fun.
I was sitting at my work desk yesterday filling out documents and emailing my supervisor when I had a strange thought. I looked at the clock on my office wall and it read “10:30” a.m. I have stared at this clock about a million times over the past four years, but today it reminded me of elementary school. 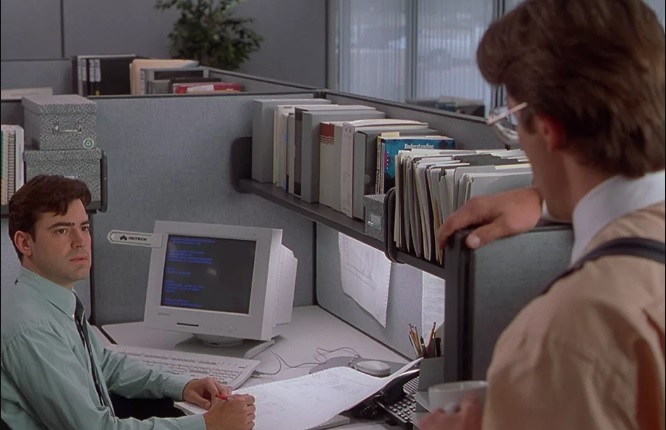 Me at my desk listening to my boss, thinking about my childhood. When life made sense.

At 10:30 a.m. ON THE DOT, we would stop whatever work we were doing, the teacher would ring a bell at her desk and declare in a loud voice, “Recess!” 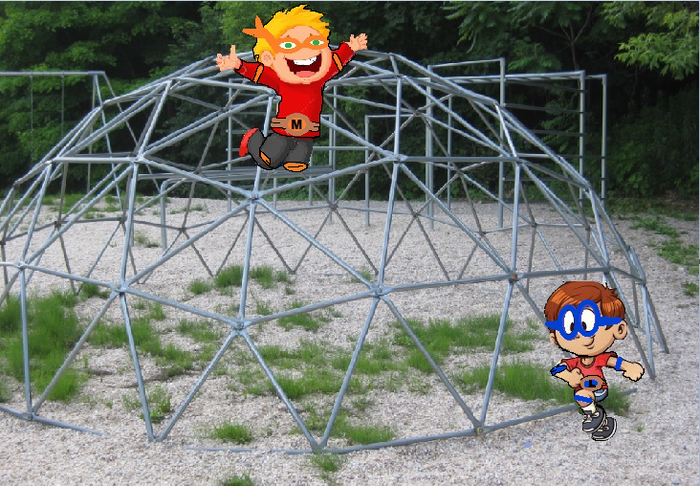 My best friend Matt and I Pretending this is a Technodrome.

When I was in Kindergarten, my favorite thing to do was pretend to be a Teenage Mutant Ninja Turtle. I was always Michelangelo, my best friend Matt was always Leonardo. We never had to fight over who was going to be which character. We would always find two other kids to fill in for Raphael and Donatello. I remember pretending the dome metal bar climber was the Technodrome. Matt was too scared to climb all the way to the top, so he would instruct us on what our jobs were (since he was the leader Leo of course). I would climb to the very top and save the day. I took a pine cone (a bomb) and detonated it at the center of the Technodrome. We would use the rocket shaped monkey bars (that are probably too dangerous today) as the sewer layer. I remember practicing our ninja skills and no one could stop us, except for the teacher’s whistle. 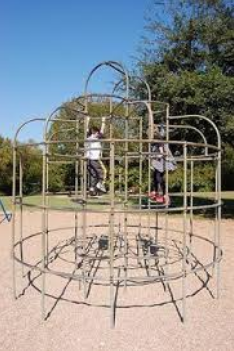 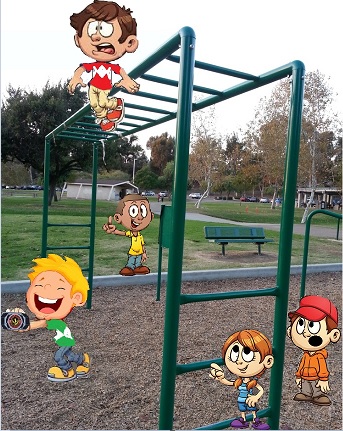 
In first grade, it was the Power Rangers. I was the ‘Green Ranger’ NO EXCEPTIONS. Matt was the ‘Red Ranger’ and we would find anyone else to fill in the blanks. Sometimes we had the whole group, sometimes we were on side missions. We had wooden and metal see-saws that rocked like a semi-circle. We would use them as ‘Zords’. I remember one day was the most epic day on the playground. I boosted Matt up with my hands to the top of the monkey bars, he was scared to get down. He looked around for a few moments and froze. A few kids started to gather around and see what was going on. I could tell he was embarrassed. One kid said “he’s stuck!” and pointed. I don’t know what came over me but I yelled, “It’s morphing time!” He looked at me, I said “Jump!” He threw himself off the monkey bars, somehow landed on my back, I dropped to my knees and he flipped forward and landed on his back in the dirt. The kids all started yelling “Woah!” and “Awesome!” The teachers didn’t think it was too awesome. Matt and I sat out the rest of Recess in ‘time out.’ We just looked at each other, at that moment when we both smiled. We knew we had done something legendary on the first grade playground. By the end of the week the kids were saying that Matt grabbed the bars, flipped three times, landed on my shoulders and I threw him in the air as he somersaulted and landed on his feet like a ninja. I love how first grade tall tales grow. 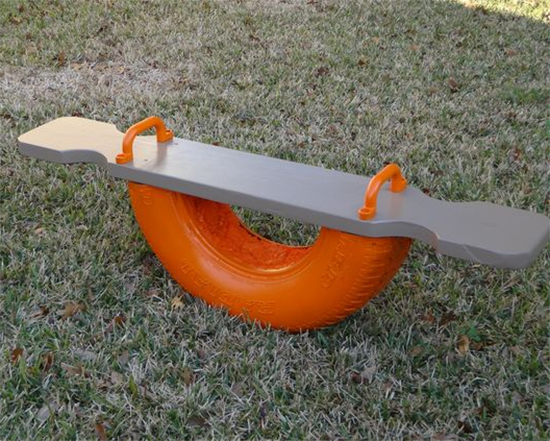 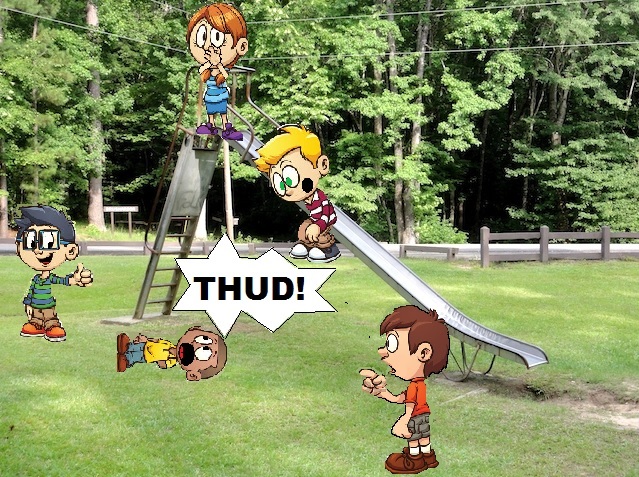 We could be anything we wanted to be. For the next two years in second and third grade we went on lots of adventures. Nick and Jacob joined our little recess gang, they became regulars in our adventures. One day we were pretending to be on a Jurassic Park dinosaur hunt. The tall metal slide that always got too hot in the sun was the T-REX. We would pretend the opening at the top was his mouth and the slide was his back and tail. It was all fun and games until Stephanie wanted to join our adventure. I told them girls weren’t tough enough to be in Jurassic Park, it’s a ‘man’s job’ to hunt dinosaurs. She shoved me into Jacob at the top of the slide and he fell off completely. Jacob broke his arm and had to wear a cast for weeks after that. Luckily it was his left arm, plus he got all kinds of special treatment the rest of the school year. They removed that tall slide after that. To think, it was our fault a piece of school playground equipment was forever gone. Though it did teach me a lesson, girls were stronger than I thought and I’ll never insult their ability to do anything ever again. Also, hell hath no fury like a woman scorned.
We Can Be HEROES... If Just For One Day (I Will Be King) 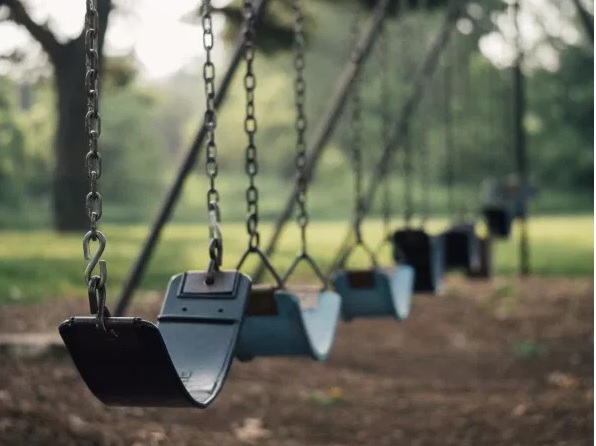 The Swings... Where Dreams Can Come True

As we grew older the “Ghostbusters” and “Indiana Jones” adventures were too ‘kiddie’ for us fourth and fifth graders. Secretly we all wanted to keep playing, but we had to ‘prove’ that pretending was for babies. One of the cool things about a playground, no matter how old you are were the swings. I remember a swing ‘jumping’ competition in fourth grade. The object was to swing as high as you can next to your opponent, the one who jumps out and lands furthest away wins. I remember Matt was one of the first ones out. Jacob wasn’t far behind him. Nick hung in there but eventually it was down to me and Bobby. Bobby was the best athlete in the school but I was the tallest boy in class. My legs gave me some advantage. I remember Bobby grunting as loud as he possibly could as he threw his body off the swing and dug his heels into the dirt. I arched my body back and kicked as I jumped. I specifically remember hanging in the air for what seemed like forever (probably less than a second) and throwing my legs straight out. I landed on my tailbone and tried to be tough, holding back tears. My face was hot as I looked at my feet. I may have ended up in the nurse’s station, but my feet were about two inches further than Bobby’s mark. Pain goes away, but for a while I was KING. Its funny how simply winning a playground competition can make you fourth grade famous. Wish it were that easy in life. Bobby went on to play college basketball, but on a hot April afternoon in 1995 I beat him at something. 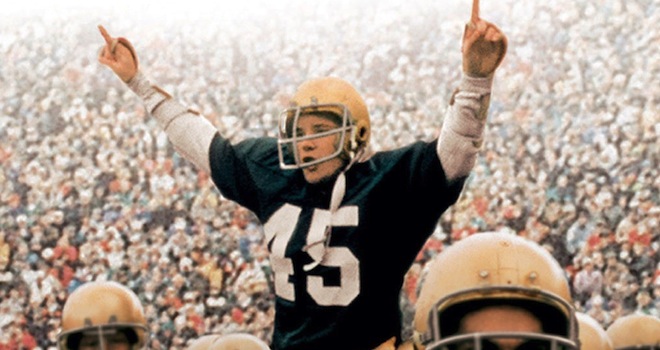 This is me carried off the playground after beating Bobby... or at least how I felt

We tried the same competition with the merry-go-round, let’s just say it didn’t go as well as the swings… 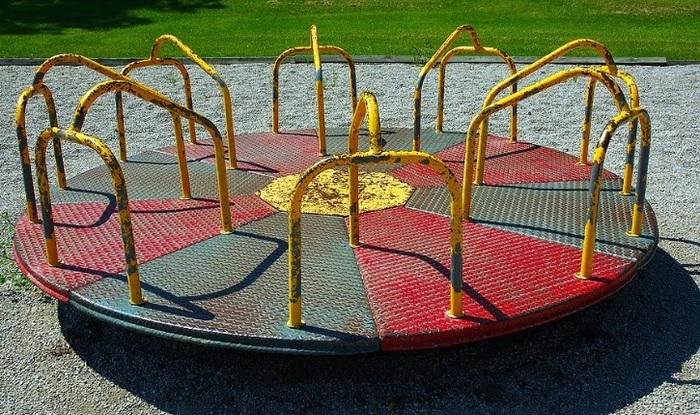 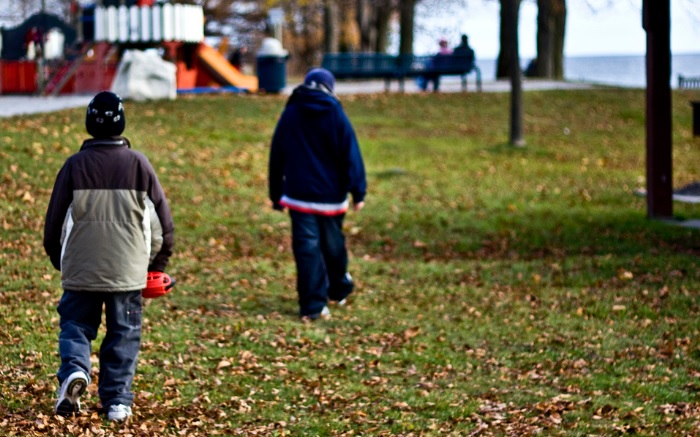 We Were On to Bigger and Better Things... (so naive)

As the spring of fifth grade faded into the fall of sixth grade, school became more complicated. We were changing classes every period, we were expected to do exams, homework took up more time in our afternoons, and eventually puberty turned us all into something completely different. Maybe those were the most exciting days of our lives? I don’t remember feeling that full of hope, with no limits ever again. Elementary recess was like an alternate dimension. For those thirty minutes a day we could be anyone or anything we liked. It was possible to save the entire world, a “NOBODY” could beat the best athlete in a competition to become “KING”, a scared kid can overcome his fears and become a courageous tall tale ninja warrior, and a tiny girl can stand up for social injustice and prove women can do anything a man can do. Mere boys become legends, and tiny acts of bravery can become myths passed down to the next class…


“Did you hear about that kid last year that did a backflip on the monkey bars, grabbed the bars, swung five times into a front flip, landed on another kids shoulders, was thrown into the air, bicycle kicked into a front somersault!?” … “No way, really?”… “Yep, happened right here!”

Man With A Plan


Where was my recess as an adult? We get two 15 minutes smoke breaks and a 30 minute lunch. I don’t even smoke! I had a strange impulse, it was an itch crawling up my neck like a rash I needed to scratch! I couldn’t shake this feeling, I rushed into my supervisor’s office and quickly came up with an excuse. I used some paid time off, filled out a sheet, and I was FREE… if only for a few hours today! 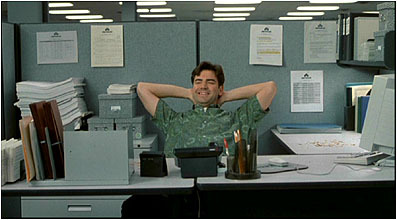 Me, When I Thought Of My Brillian Plan

I got in my car and drove to my son’s elementary school. I checked him out and we drove straight to the local park in town. I surveyed the landscape as I decided what we should do. Instead, I kneeled down beside my son and said, “What do you want to play?” He replied, “Ben 10!” So for the next hour, we weren’t on our tablets, phones, or devices not speaking to one another. Oh no… For the next hour I was “Grandpa Max” and he was “Heatblast” or “Four Arms” or “Diamondhead” as we defeated his greatest enemies. He used my watch as the “Omnitrix” and he instantly transformed into a whole new world. I hadn’t felt that free since I was 10 years old, and I swear to you he looked at me for a moment like Matt did when we were young… as if to say “Welcome back old friend, our dimension missed you.” A chill ran up my spine, the hairs on the back of my neck stood up and I just smiled. Before we left, I sat in the swing and took a deep breath. I took off my shoes, arched my head back, and let gravity do the work as I reflected on this day.

I’ll end this article with my favorite nostalgic quote from Ferris Bueller. “Life moves pretty fast, if you don’t stop and look around once in a while, you could miss it.”

The End
11
Login To Vote!
More Articles From MelloMovieReview

6
Quote O' Matic
Keys: "Elliot, that machine, what does it do?"
Added By: System
E.T.: The Extra-Terrestrial
Related Articles