Into the boss's clutches. My top five most bad ass final boss themes
By Nightwatcher
On
Now don't try to deny it, we've all been there before. That last stretch leading up to the final showdown, that one last battle that we just worked so hard to reach. The final face off between good and evil that will determine the out come of our adventure. After the nightmare that this son of a dust buster has put us through the one thing we want the most at this point is to see them bite the dust. One of my favorite tracks from a video game soundtrack has always been the boss themes, esspecially the final boss, because what better way to set the tone to this battle than with a dark, energetic tune. Here are my top five favorite bad ass final boss themes from vintage games in my collection. 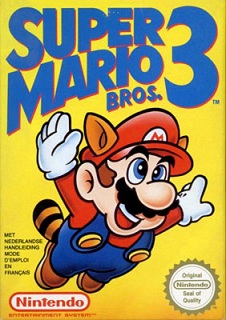 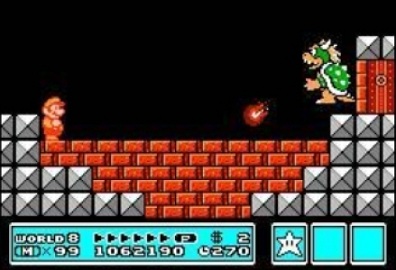 Nothing was more quenching for our frustration than having finally made it to Bowser's chamber and watching him smash his way through the brick floor, causing him to commit accidental suicide. Ah, I feel much better now. The only task now was to get through the door on the other side of the room quikley in order to see the full ending, a task that I unfortunately sucked at. Oh well, at least the final boss fight was satisfying. 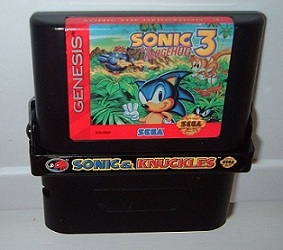 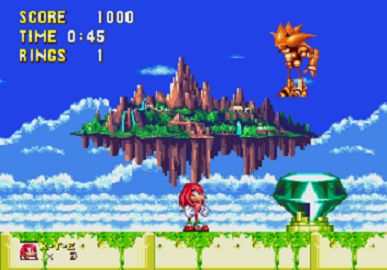 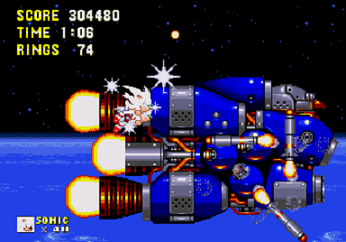 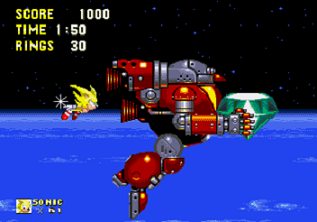 This spot gets a double wammy as this game had two final bosses depending on which main character you were playing as and,as such, two different final boss themes. Knuckles had to save the Master Emerald from the latest robot hedgehog Mecha Sonic which had the ability to absorb power from the emerald to gain it's own advanced form, a sort of psycho robot version of Super Sonic. Sonic on the other hand, had to go super (hyper if you had all the giant emeralds) and face Dr. Robotnik himself in a final showdown in space. Despite them being two entirely different battles they both had the same theme music which was pretty dark and cool. The theme for the Doomsday Zone is cool too, it sets the perfect tone for the final rush. 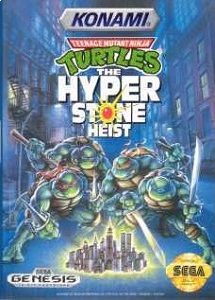 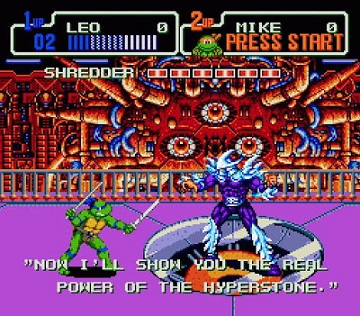 I don't yet have a copy of Hyperstone Heist (and I stress 'yet') but I do have a copy of The Manhattan Project for NES and they both have the same music for the final boss, except that the NES version sounds like just a bunch of 8-bit beeps compared to the much more clear and intense 16-bit Genesis version. In both versions Shredder makes one final attempt to destroy his hated terrapin enemies by mutating himself into the powerful boss from the end of the box office hit TMNT 2: The Secret of the Ooze. The difference being that in the NES game he cracks open a canister of ooze and pours it over his head while in the Genesis version he zaps himself with a giant mutagen beam that is being powered by the Hyperstone. Shredder has the same attacks in both versions including his usual punches and kicks as well as a mini mutagen beam that can turn the TMNT back into ordinary fish bowl turtles. Super Shredder's punches and kicks are also powered up so they can cause mini earthquakes and he has enhanced speed. A formidable foe indeed. *Gulp!* 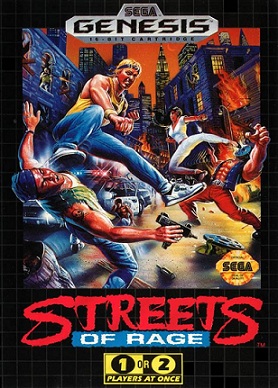 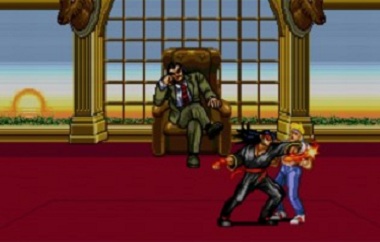 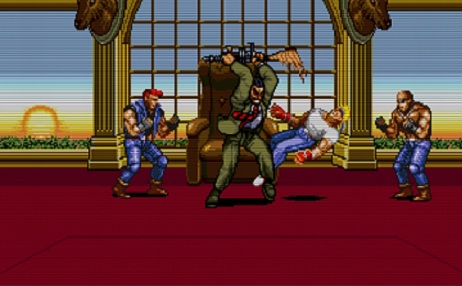 It's been a long and difficult fight, you've made your way through dark allies, across a major bridge and even kicked butt on a yacht. Now you've arrived at the top of the Crime Syndicate high rise and are stepping across the thresh hold into the office of their leader Mr. X. After all the punks and ninja assassins you've defeated you are about to determine the fate of your fair city. You will fight Mr. X but once all is said and done, will you kill him,...or join him? The theme for this battle is one the best I've ever heard and makes the perfect epic beat for this epic beat down. Ready, FIGHT!! 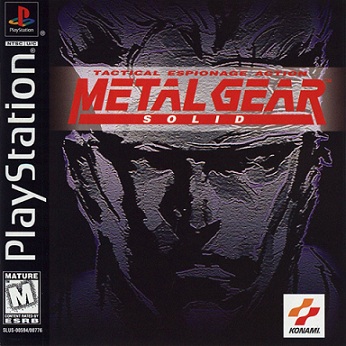 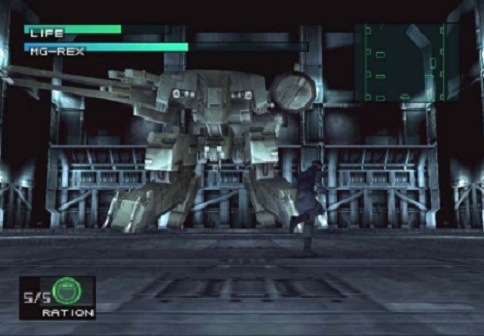 A terrorist group called Fox Hound wants to rule the world through fear by launching a nuclear missle, what better way to do so than with a giant dinosaur like robot. code named "Rex". This latest model of Metal Gear is one serious machine. Armed with a nuclear missle, a rail gun and two really big, heavy feet and piloted by the torrorist leader Liquid Snake, Rex was the ultimate in nuclear war fare and only one man, known only as Solid Snake, stood between Rex and a free world. Ironically enough, Fox Hound was formerly an American military group that Snake had once worked for. You must help Snake defeat his evil twin and save the world as we know it from nuclear war. One lone man against a gaint weaponised robot, the odds weren't good for Snake but this wasn't the first time that he had done this either. The music was well orchestrated for this, and all of the game's boss battles, but the boss battle with Rex is perhaps one of the greatest in video game history ans is widely renouned amongst hard core gamers (including myself) to this day.


That's it for this one, another short but sweet trip through retro nostalgic video game land, I hope everyone enjoyed it. I'll be back in a little while with a holiday treat. Until next time retrojunkers, keep those thumbs mashing on those buttons. Nightwatcher out.