My relation to Suikoden, my first JRPG crush and a great game still.
By littlejay
On 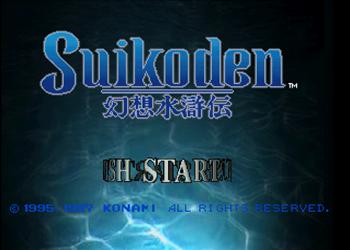 Spring 1997, I was in fifth grade and life was just a blast. Video games were my religion (since I had become too old for Lego) and Sony Playstation was my god. Back in those days a month was really a noticeable length of time and a year was an eternity and summer 97 until fall 98 would prove to be the year that I came to remember as the golden era of my childhood. In retrospect the single most important reason for this was Final Fantasy VII, but it was another game that started it all.

Because to me the greatest improvement with Sony Playstation was not that it made 3D graphics mainstream or had CDs with what at the time was considered to offer practically unlimited storage space. For me it was that it opened my eyes for a totally new genre, the Japanese role playing games. Sure the genre itself wasn't that new, but it wasn't until now I had really started to pick up English and in the previous console generation I had gone with SEGA and their Mega Drive (SEGA Genesis for you transatlantics) which meant I wasn't familiar with games like Chrono Trigger, Earthbound, Secret of Mana nor Final Fantasy yet.

Sure, there were already rumors at this time about Final Fantasy VII and the hype was growing. But for us Europeans the game was still 6 months away and for me Final Fantasy was still something unfamiliar. The game that made me fall in love with the genre was an at the time obscure, hard to pronounce game called Suikoden (or Seakeeden as it was officially pronounced among my friends until just a few years ago). A friend had picked it up at the local game store since we had started to get into Dungeons & Dragons and anything including the fantasy concept appealed greatly to us.

The game was developed by Konami and it all started with the naming of the main character, you. We named him Oscar since that was the name of my friend who bought the game, and Oscar was what he would be named numerous times in the future even when I played it solo. After naming him the marble halls of Gregminister Castle faded in to vision and an epic adventure sprung to life. You play as the son of Teo McDohl, one of Scarlet Moon Empire's Great Generals. At first you join the Imperial Army but as the game progress you discover that it is a corrupt empire and instead you join a rebel group called Toran Liberation Army. Throughout the game your army grows and you get to conquer a fortress which becomes your headquarters in which all of the 108 characters that joins your struggle will come to live.
Without spoiling the plot too much some of the more memorable features of the game includes the duel between Pahn and Teo where Pahn is the underdog and dies if he loses which he of course did the first times we played the game. The first time we managed to defeat Teo was a moment of great joy! 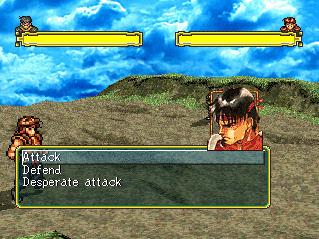 The great battles were another memorable feature. It's basically paper, rock, scissors but it was as epic as it could be back in the mid 90s with the whole screen swarming with soldiers and the officers dropping cool comments during the tactical moves. 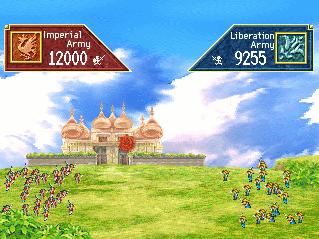 As more and more people join your army the services of your fortress improves and you can literally spend hours there walking around playing card games, gamble, decorate the interior of your bath house, attach runes, talk to people and get to know their story, buy and sell items, sharpen your weapons, read books in the library or just explore the ever growing fortress with its many cozy corners.

The game featured colorful and nicely designed graphics, beautiful music, and a story which at the time was as dramatic and complex as I could grasp and many epic moments which I still remember as clear as if I played them through yesterday.

With such a great number of characters it's likely to believe they would be kind of pale and uninteresting but one of my favorite features of this game is the great character gallery. Characters like Viktor who wields the Star Dragon Sword, the elf Stallion with his fast feet, the awesome black knight Pesmerga, the hero's bo instructor Kai, Milich Oppenheimer the â€œFlower Generalâ€, the fishermen Tai Ho & Yam Koo, the bandits Varkas & Sydonia, the confused Viki with her teleportation skills, Kuromimi the kobold, the Liberation Army's first leader Odessa, Neclord the vampire lord, Ted who initially bears the Rune of Life and Death and is over 300 years old and many more have left a strong impression with me. Combining the different characters right in battle could enable special unit attacks and having certain characters present when visiting certain places at certain times would trigger many secrets. With more than 90 characters available to join your party and about 20 hours of gameplay the possibilities were endless!

In summary this is a great fantasy adventure that introduced me to JRPGs and has left me with many great memories. In many aspects it has aged with dignity and I would really recommend you to try it out if you haven't already.

10
Quote O' Matic
Thalia: "Will you listen to him? He's makin' the story sound like some Greek tragedy. -Thalia"
Added By: System
Hercules
An unhandled error has occurred. Reload Dismiss