Childhood memories of a pop culture phenomenon!
By Hoju_Koolander
On 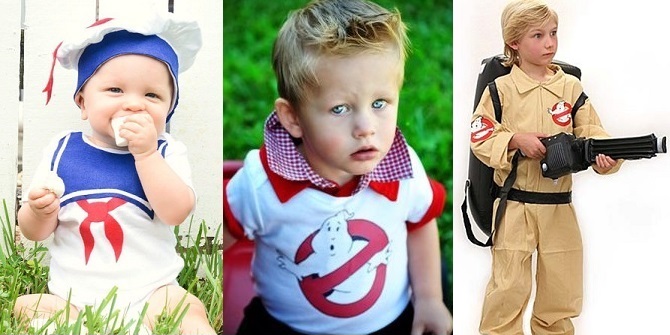 Seeing as this is the 30th anniversary of Ghostbusters, and I turned 32 this year, I think it’s safe to say that there has never been a conscious moment that everybody’s favorite paranormal exterminators weren’t a part of my pop culture experience. No scratch that, my life, period. See Ray, Peter, Egon and Winston may as well have been my favorite uncles for as much as their adventures have crossed my mind over the past 3 decades (thought I was going to say streams didn’t you?). It’s crazy that I haven’t written about them after 5+ years of contributing to the site, but like Cheech said in GB2, “Better late than never”. So let’s open the containment unit that is my brain and get bustin’! 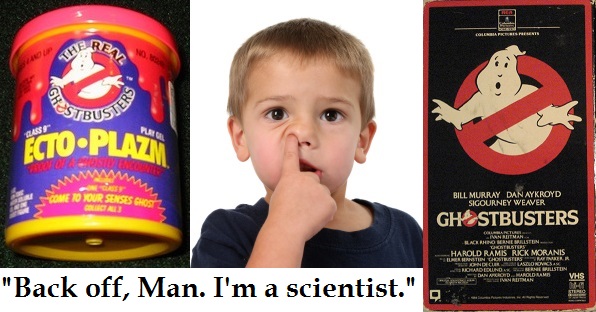 In case you’re checking my retro-cred, I’ll just be frank and say I wasn’t there for opening day at the theaters in 1984. This is mostly due to the fact that I was 2 years old and busy picking the “ecto-plasm” out of my nose. But once my family got a VCR in 1986 it was my #1 rental at the neighborhood video store. I literally rented it every chance I was given to pick the movie. Scenes that should have frightened a 4 year old me, we’re instead like cinematic crack and I kept going back for more. You might say, ‘”Why didn’t your parents just buy it for you?” What are you, crazy? In the early 80’s VHS tapes cost like $50 bucks a pop! They might as well have been buying crack. Seriously though, don’t do crack.

My favorite moment from the movie as a kid was definitely the hunt for Slimer through the hallways when they almost fry that poor maid and burn her toilet paper, “What the hell are you doin’?” See you though I was gonna say when Slimer gets Venkman, but no, that maid and her flaming toilet paper cracked me up…I was weird kid.

As an adult favorite segment of the film is Venkman’s inspiring speech after the trio get fired from the University, when he does this little sing-songy deal saying, “Call it fate, call it luck, call it karma. I believe that everything happens for a reason”. Wise words, Dr. Venkman.

The other nostalgic connection to Ghostbusters in my brain is spandex. Before you freak out, just remember that the 80’s was also a period that saw a huge aerobics boom in USA. In fact, Dana Barrett is doing aerobics in her apartment at one point in the film. Now I’m not sure if that inspired the ladies at my church to include the Ghostbusters theme song in the music rotation for the exercise class my Mom went to, but if the leotard fits… The point is that all of us kids we’re bored out of our minds waiting for our Mom’s to finish “Sweatin’ to the Oldies” until that song came on, at which point we would spastically run around the church with imaginary Neutrino Wands in hand dispensing with our own brand of paranormal justice. 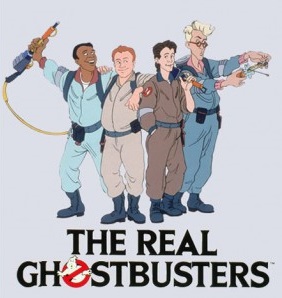 At the same time I was compulsively renting the movie and zapping spandex spectors, The Real Ghostbusters cartoon series showed up on my Saturday Morning viewing schedule and truly cemented my love for the characters. The “Real” was added so as to not be confused with Filmation’s Ghostbusters series, which was cool in its own way, but not nearly as iconic. Sure, in the cartoon world nobody looked like their cinematic counterparts, but you have to admit the movie could have been that much more awesome if Egon was sporting that albino Greaser doo…Eh, maybe not. 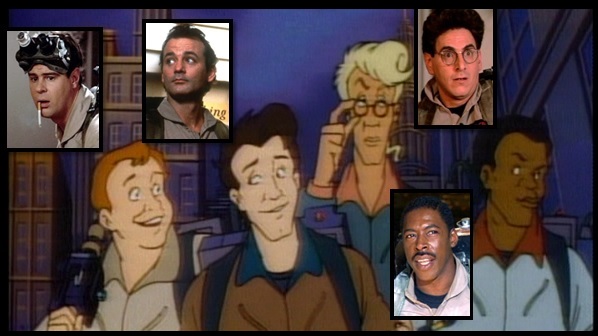 The cartoon was so popular it even got its own Happy Meal at McDonald’s featuring an awesome spinning Slimer pencil topper and my personal favorite, Stay-Puft Marshmallow Man pencil sharpener. The rest of the “items” (ask any kid, school supplies are not toys) included pads of paper, erasers and rulers. You could even find Ghostbusters in the grocery aisle with their own brand of cereal!

I wasn’t allowed to consume “sugar cereal” growing up, but that didn’t stop me from cruising the aisle to see what premiums were being included in Cap’n Crunch or Fruity Pebbles each month. So imagine my surprise when this holographic beauty caught my eye. Holograms were where it was at for a child of the 80’s, mixing them with the power of Ghostbusters was marketing gold. I think I may even have gone so far as to ask if we could buy this cereal, but the fact that an empty box emblazoned with a hologram doesn’t currently reside in my closet pretty much tells that tale.

My favorite episode of the series was definitely the time the guys stopped nabbing ghosts and started fighting crooks as the Crimebusters. They could trap bad guys in cages produced by their proton packs, which was awesome. I would have been even more devoted to the show if they never saw another ghost and just kept cleaning up the streets of New York. But you know, they already made all those toys that said Ghostbusters on ‘em, so who you gonna call? Speaking of which…

Any child of the 80’s will tell you that a cartoon was really only as good as it’s toy line and The Real Ghostbusters action figures hit it out of the park. Forget Barbie’s Malibu Dreamhouse, every kid wanted the Ghostbusters' Firehouse! It had 3 levels to stage your action on, plus the fire poles. You can’t tell me that every time you slid down a pole at a park, you weren’t pretending to be a Ghostbuster. Now I didn’t get the firehouse when it was new in stores, but when I managed to score it at a garage sale along with the Ecto-1 around 1989, I was floating on air like Sigourney Weaver above a bed.

Now my buddy Brent somehow managed to own every Ghostbusters toy ever made (not an exaggeration), so I mostly experienced the fun vicariously through his collection. Of the few figures I did manage to score through various holidays, my favorite had to be the Fright Features Peter Venkman. Aside from the fact that he had a vest (which I convinced myself was the height of fashion), when you squeezed his legs together his eyeballs, hair and mouth exploded in a Large Marge show of horror.

It was literally the equivalent of a cartoon coming alive in 3-D as far as I was concerned. Sometimes I flipped his hair around to create a Davy Crockett style 'Coon Skin cap. Other times I put bits of Starburst in his mouth to chew, which resulted in hours of fun. Overall I think I just loved the fact that I could make him talk by opening and closing the mouth. Kudos to Hasbro for creating such an awesome action feature.

That’s all the memories I have leading up to the release of the sequel in 1989. Seeing as how this article has gone a little long already, let’s lock the containment unit for the time being. Let me say this though, you’ll want to come back for part 2, as I have a spooky surprise in store (preview below). Until then just remember, “If someone asks if you’re a god you say, YES!” 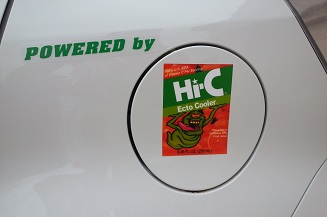