What Shows Scared You As A Child?
By RedMetalSky
On
So you are wondering why I decided to write this article, well there are a few different reasons that provoked me. The first being that I saw on a few websites that the movie Coraline had got some negative comments from people saying that it was way too scary especially for kids. I did not find it too be that scary, also I had gone in expecting it to be scary simply because it was a fairy tale. For hundreds of years fairy tales were used to keep children in line. Only in more modern times have fairy tales become less frightening.
My Great Grandmother had told me that her grandmother was shocked when she came from Sweden to America and found that people sold cute troll knickknacks. She was afraid of trolls because her mother used to tell her that a troll lived near their house and would sit outside knitting in the moonlight. If the troll saw you out, she would stick you with her needles. This story was meant to keep the children from wondering off in the night, and it worked. When they had to go use the outhouse they would run out as fast as they could, and then run back as fast as they could without ever giving the chance to find out if there really was troll. (The hard way: poke, poke) Now a days we dont have many reasons to tell stories, though we do have are modern day monsters such as gangsters, pimps and child molesters. This is why horrifying fairytale monsters have become less prevalent.
Secondly the film Coraline was rated PG which tells you right away that it may be inappropriate for some viewers. Although we are all scared or disturbed by different things which is why it is up to the parent to decide weather or not they think the movie is too much for their child. I know the rating system is messed up and they do let things slide in some films and judge others much more harshly, which is why parents should research a film before taking their kids to see it. So anyway I decided to list a few Scary moments from G rated animated films that I remember watching when I was a child.
A Rat! 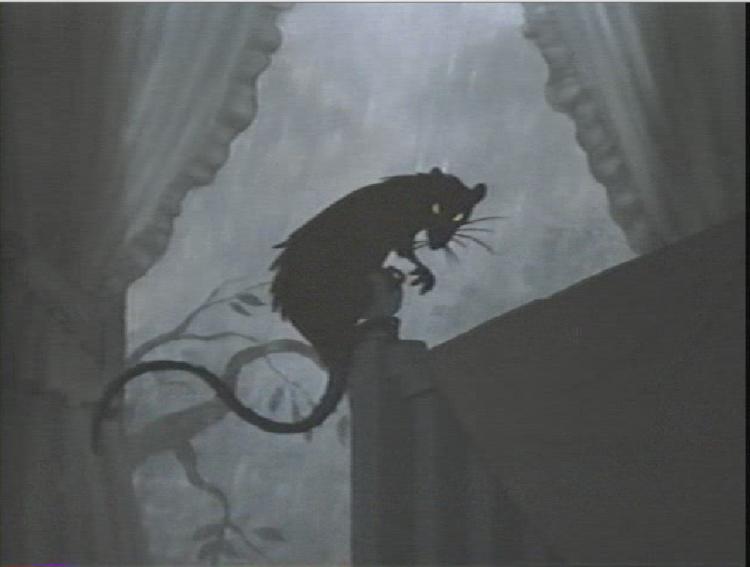 From The movie: Lady And The Tramp
Rats are cool but you never want to wake up and find a wild animal chewing on you during the night. This scene is enough to make you check and double check all your windows. 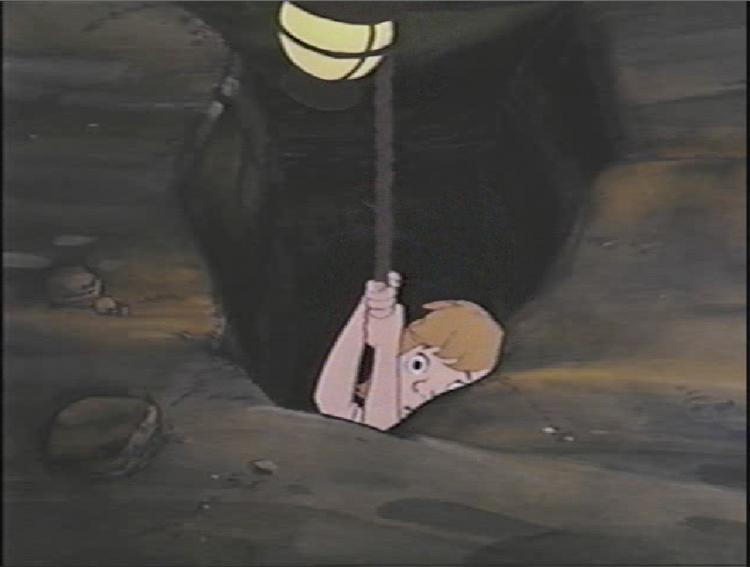 From the movie: The Rescuers
Not the most pleasant thought, being forced by your captors into a cave that fills with water. I always felt bad for this girl and always hated adults that are cruel to kids. If Penny had not found the diamond I think she would have been left down there for dead. This made Medusa one of the worst Disney villains in my opinion, although she did have one of the best entrances. (Flying up onto the boat with the swamp mobile and swinging the doors open surrounded by smoke.) 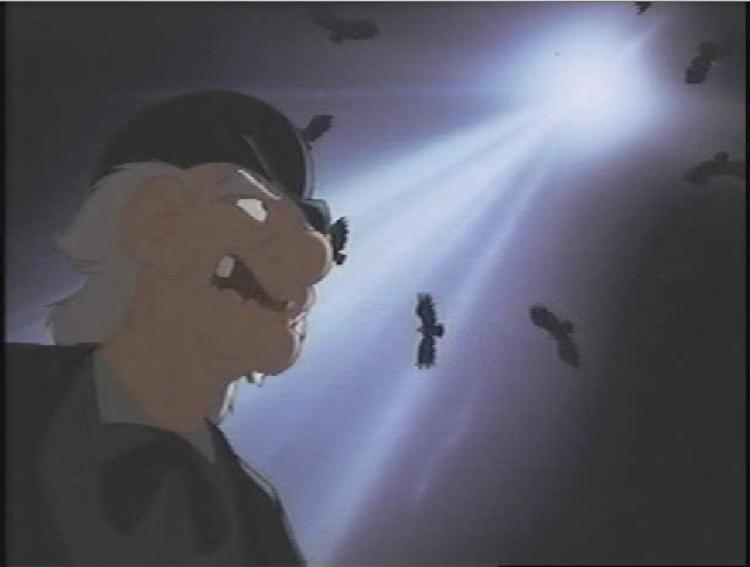 From the movie: Were Back! A Dinosaurs Story
At the end of the movie the villain is devoured by crows. Come on did he really deserve this! Yes I know he threatened the kids and turned them into chimps to get the dinosaurs to do what he wants. But he lets the kids go and I did not feel that they were in any real danger. Besides he was restoring the dinosaurs back into their natural selves for his circus. Unlike his brother the so called good guy who is playing god traveling through time and dumping a bunch of artificially enhanced dinosaurs into New York City. (Sounds like a super villain plot to me.)
Sharp tooth! 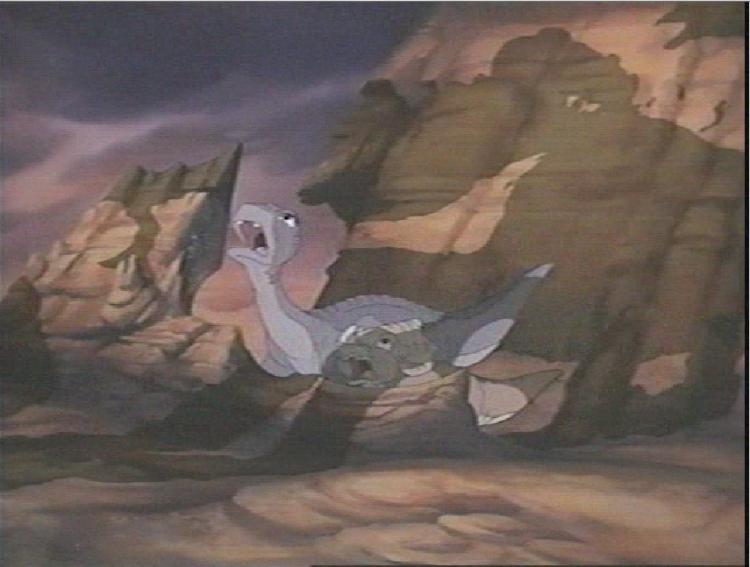 From the movie: The Land Before Time
Hey another movie with dinosaurs. This one you can clearly see a Tyrannosaurus rip a hunk out of the main characters mother in the shadows. 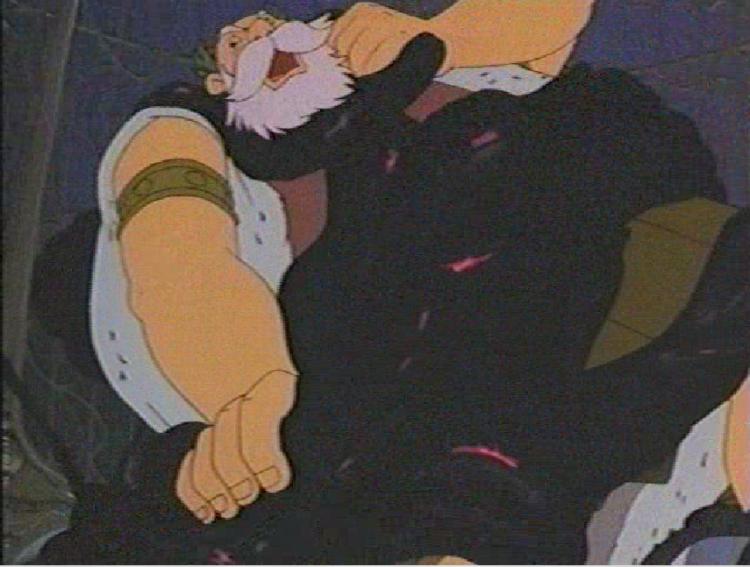 From the movie: Little Nemo Adventures In Slumberland.
Although I know some people who who were afraid of the Nightmare King at the end or the whole movie in general, I think the black slime engulfing the king and then vanishing was the most frightening part of the movie. 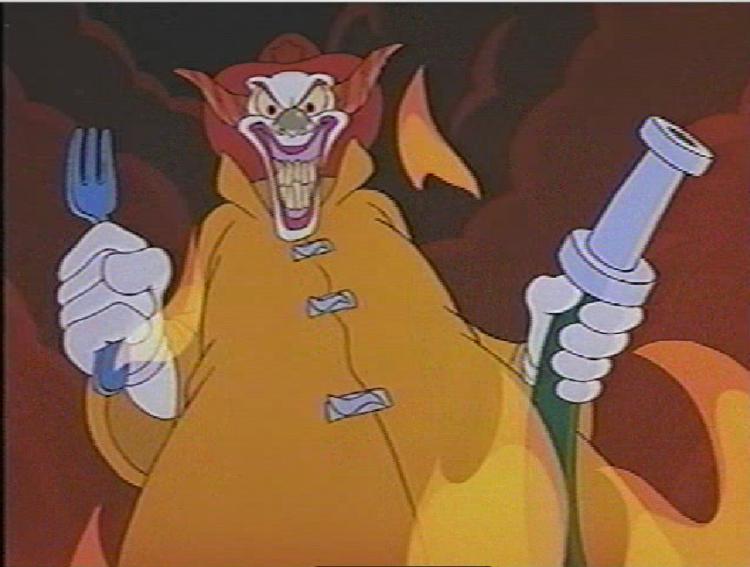 From the movie: The Brave Little Toaster
This guy is scarier than most of the monsters I have seen in R/Unrated horror movies. If his looks arent scary enough for you think what he might do to you with the fork and the big hose!

Rabbit Gets Sucked Down The Drain 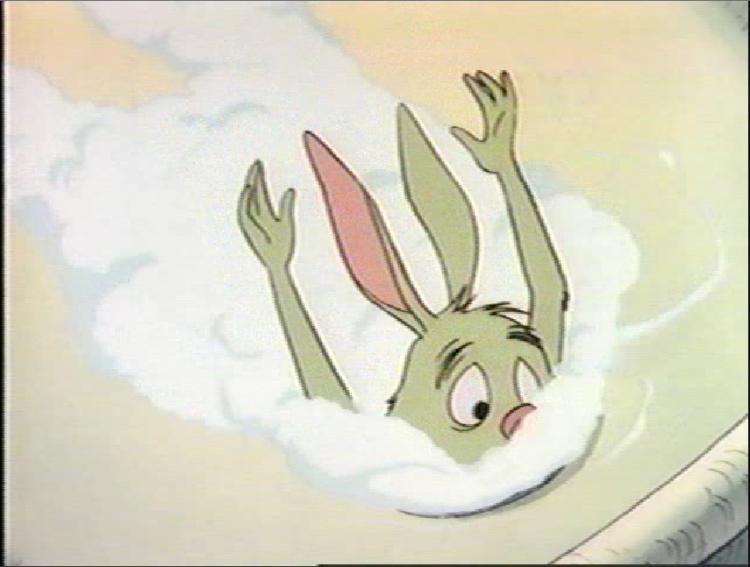 From: The New Adventures Of Whinnie The Pooh
Although this is vary hilarious it disturbed me at the same time. As a child I was always afraid of falling down a sewer and drowning in the cesspool within. I had heard stories of kids falling into wells and manholes and was always afraid it might happen to me. For years I would not step on or near sewer lids. This fear stopped bothering me more than 10 years ago but at that time this was kind of scary.
38
Login To Vote! 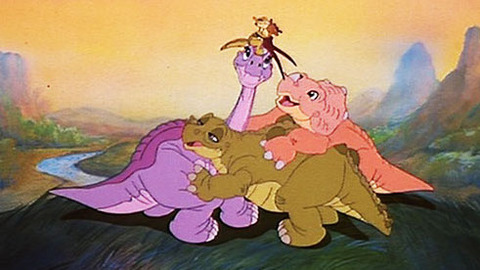