or how to get the most playtime out of your action figures as a kid.
By Mad_Dog_Tannen
On
As someone who was born in '84, I grew up at just that right time when both Ghostbusters (being on the way out with the series ending in '91) and the Teenage Mutant Ninja Turtles (being on the way in with the series ending in '96) were at their peak popularity at the same time. Despite having the two most important teams of crime fighters (if you count being a ghost a crime) existing at their peaks of popularity during the same period of time, there was never any true crossover to occur.
Sure Michelangelo and Slimer both appered in the Cartoon All-Stars anti-drug special, but they were too busy stopping a kid from getting high to realize that this was their moment to join forces. In fact, as a child I rented Cartoon All-Stars from the free rentals section repetedly hoping that their was a small chance that the plot would magically change course. It didn't, and thats why I did what I had to do.
Besides watching the cartoon series like crazy (never once reading a TMNT comic or ever understanding the jokes of Ghostbusters I & II at the time) I collected piles of figures from each series. Sadly, as one who came into the craze halfway through I never owned a complete original TMNT team or Ghostbusters team. My collection consisted of Ninja Turtles dressed in their many variation costumes and the shiney Toon Turtle versions. The toon turtles were FAR from badass, but each had a crazy feature. Mikey stuck out a long red tonge, Leo's eye's bulged and I can't remember what the other two did but I believe one spun their head. I can't even count how many times I had Mikey lick Leo, only to have Leo's eyes pop out in surprise. Ah, gay turtle memories.

As for Ghostbusters, I had the team suited up in their Super Fright variation costumes. While in their pre-frightened state they looked like they were going on a space mission. But once you push, wind or twist a protrusion on their back the scary silliness began. While I thought it was odd for grown men with years of ghost catching experience to constantly freak out over their day-to-day job, I couldn't deny that Ray had an awesome expression.
Besides the figures, I was a major vehicle and playset junkie. I had it all, I'd list it but it's better to have you just think out the Ninja Turtles and Ghostbusters vehicles and playsets and then the phrase "it all". After months of desperation for a proper crossover and tons of toys from both sides, it all finally added up in my head. "If THEY won't do it, then I'll do it." Collecting all the figures, vehicles and playsets I could in my basement I began to work my little boy mind and try to think of the most plausible ways in which my two favorite teams on Earth could meet.

The most obvious of these was that both existed in New York City, the Ghostbusters on the surface and the Turtles underground. In order to have these two sides collide, Shredder worked as the intermediary. Knocking on the Ghostbusters plastic firehouse door, Shredder confessed to a really surprised looking Ray that the sewers were haunted! Suiting up and taking the ECTO-1 to the sewer playset, Peter, Egon, Ray, Winston and Louis pried open the manhole and dropped down. Not one to stretch things out, the Ghostbusters immediately met the Turtles and the Super Fright/Toon Turtle expressions war ensued. I assumed both would be surprised to see the other so Peter's hair began to shoot up and down as Leo's eyes popped in and out. Mikey licked Louis, who in turn fainted (because he had no Super Fright feature). After the battle of expressions was over, the two teams began a battle of strength. As the figures clacked against each other and made various grunts and oofs, they began to realize that the Ghostbusters weren't evil and that the Turtles weren't ghosts. 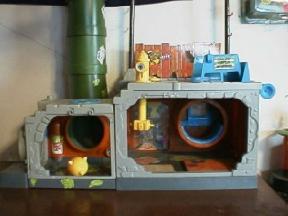 After the realization, the two teams made up their differences by joining forces and taking on the Shredder, who conveniently was 6 inches away with a tunnel connecting the Technodrome to the sewer. The eight (Louis was still passed out) crawled through the tiny pipe and thus began the massacre. Bebop, Rocksteady and Krang were the first to go followed by Shredder who fell to his death into the ghost containment machine, which moved to the sewer for no reason besides allowing for a nice tip of the hat to Shredder's demise in the first Turtles movie. After all was over, the teams headed back to the firehouse to celebrate with oozings and crazy expressions for all. 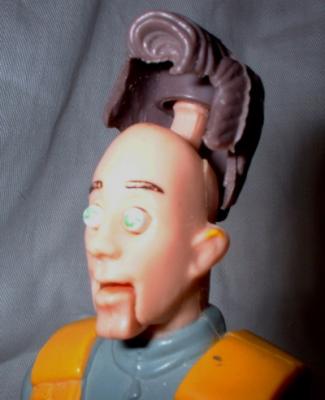 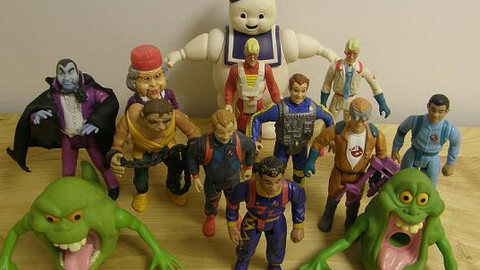 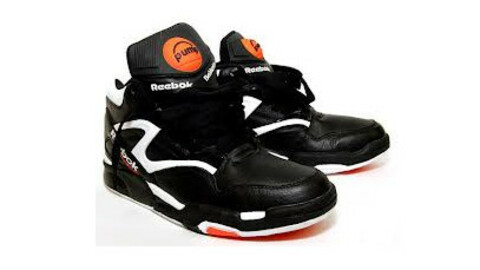