A retrospective look at the rise of the X-men craze in the early 90s
By Mashedpotatojones
On
The year was 1990. At eight years old, my only exposure to comics and comic book heroes at the time had been Superman from the classic Christopher Reeve headlined movies, the old 60s Batman show, the Super Friends and the 1989 Batman film starring Michael Keaton. Notice a trend here? All DC comic book heroes. It's true, up until the early 90s, my exposure to the realm of comic media had been entirely restricted to DC's pantheon, and then only the two heavy hitters. Although I was aware of Marvel comics, mostly Spider-Man and Captain America, DC pretty well owned my interest. To be honest, at the time I didn't even distinguish between the two comic companies. In my young, intellectually undeveloped mind, I just assumed that one mind was behind the creation of my favorite Saturday-morning heroes.

This all changed however in 1990. On a spring day in late May (added for dramatic effect- I really couldn't tell you exactly what month this actually happened) a school yard chum of mine named Mike introduced me to a whole new world of comic heroes--- heroes who possessed such bizarre names as Colossus, Cyclops and Storm and of course Wolverine!

"Really?" I thought to myself as I examined the cover of Giant Size X-men #1, feeling both a sense of wonder and amusement at the colorful cast of characters smeared across the cover of the book. Superheroes without the word 'man' or 'woman' in their name? What kind of heroes are these anyway!?

A very different kind of hero I would soon learn.

This was the beginning of a major phenomenon that occurred at my school among us worshippers of the comic hero. This was the beginning of Marvel comics golden age. The age of the X-men, where heroes like Superman and Batman were considered boring or stale. Because the X-men were, unlike many of their DC counterparts, very human. They were angst ridden and flawed. They bickered and argued amongst themselves. They loved and hated. These were REAL heroes well, real in the sense that they weren't just overgrown boy scouts with an over developed sense of patriotism. These heroes were filled with emotion. They were vulnerable and misunderstood. And some times, they were even hated just for being different.

I instantly fell in love with the X-men. And Giant Size X-men became the very first X-book and first real comic I would ever own. It soon dawned upon me that this book was even older than I, by seven years in fact, and that there was literally over a decade of X-men books just waiting out there for me to find. I'd been swept up in X-men mania.

Now, when this happened, the X-men cartoon was still two years off, before the 'franchise' had really been established. All we kids had at the time were the comics and of course, the trading cards.

The cards were actually a big part of our combined obsession. In 1990 Toy Biz began releasing the Marvel Universe Series 1 trading cards. These were a big deal as they served not only to further feed our insatiable hunger for all things Marvel, but also gave us a serious hobby. For some of us, it was our first REAL hobby. They were the Pokemon of the day, only more awesome. Many of us would spend hours looking through our collections, trading away doubles for more sought after cards and constantly looking out for our favorite heroes. For me, it was all about Wolverine. I traded six 'lesser' cards just for one Wolverine card.

The card list would continue to mount as each year for the next two years Toy Biz would release a follow-up series to the Marvel Universe card collection. Those of us â€˜hardcore' collectors would literally have boxes and binders full of cards, mostly doubles, or triples, but always on hand in the event that one of our chums wanted to trade. By the time of Series 3, it was 1992â€¦the year that EVERYTHING changed.

The year that the X-men cartoon premiered on Fox.
I distinctly remember sitting in front of my dad's TV, sitting dangerously close to the (at the time) large 32-inch screen, my heart racing in my chest as the unforgettable theme song played. And man was it good. Not just good, GREAT! This cartoon defied convention. This wasn't your 1960s Spiderman cartoon. This wasn't your Super-Friends. The X-men was in a league of its own. Taking material straight from the books, it featured the same flawed, very human characters me and my school pals had come to love. These guys argued. They felt jealousy. They fought EACH OTHER! These were characters who felt â€˜lived in'.

But it wasn't just the characters that set them apart from the standard fare. The way the show was constructed was equally as ground breaking. This show was a serial. For a cartoon, that was almost unheard of at the time! For the first few seasons at least, the show told one long story that played over the course of the season, with each episode ending in a cliffhanger that left you wanting, nay, SALIVATING for more! And come Monday, those of us X-freaks would all be gathered out in the schoolyard to discuss the weekend's episode.

The X-men had become a full on franchise at that point. Soon, every birthday or Christmas we'd be asking for at least one X-men toy. We'd go out dressed up as an X-man for Halloween. We'd be getting the video games (I still have fond memories of Spider-man and the X-men: Arcade's Revenge for SNES!), and of course, the influx of comics continued unabated.

Then around 94, we began hearing whispers, whispers of an unconfirmed project involving our beloved heroes. Of a major Hollywood movie featuring the X-men. These rumors fueled speculation for years. Who would star in it? Who would direct it? What would it be about? Would they base it on one of the books or the TV show? Would it be live action or animated? I remember actually having DREAMS of the X-men movie; dreams of waking up on a Christmas morning to find a VHS copy of the movie under the tree. No kidding. Honest to goodness dreams of a movie which I didn't even know was actually going to be a reality or not.

Our speculation was confirmed as early as 1995, when a news program ran a story on the X-men during the height of the show's popularity. At the end of the story, the reported claimed that a movie was 'in the works' with none other than 'Mr. Terminator' himself James Cameron helming it. I was absolutely floored when I heard that. The director of one of my favorite movie franchises directing an X-men movie!? I was in shock. Disbelief. Elated.

But, like many things, this proved too good to be true. As we all know now, the James Cameron directed movie would never be made, and it wouldn't be until 2000 that we would actually get our X-men movie.

Unfortunately, I'd barely noticed. By late 1995, the X-men craze had severely ebbed at my school. More kids had gotten interested in other Marvel characters like Ghost Rider and Daredevil and the Punisher, while others had switched allegiances to Image Comics, home of Spawn. Even I had lost my interest in the X-men, as by then I'd discovered â€˜Venom' thanks in great deal to the brand-new Spider-man cartoon, which had premiered a year earlier.

In many ways, it was the end of an era; the end of a large part of my childhood that had encompassed nearly five years. While I still held the X-men to a very high regard, I simply didn't put in as much effort with them as I'd had. No longer were my weekly trips to the local comic shop all about finding the latest and greatest X-book. Now I was more interested collecting the entire â€˜Maximum Carnage' series. As for my X-men figures, they began playing second fiddle to my growing Star Wars obsession and the horde of â€˜Power of the Force' action figures I would soon accumulate. I'd even traded away the book that had started it all; a book given to me by its original owner on my 8th birthday. Giant Size X-men #1. Though its corners were frayed and some of the pages stained from water, had been my first foray into the world of the X-men. In many ways, I look back on that act as the symbolic end to my own X obsession. Indeed, since then, I don't believe I've purchased a single issue of X-men.

The X-men were a staple of the 1990s. Despite having existed since the 60s, it wasn't really until the 80s and 90s that the book had truly elevated beyond that of 'just another' comic book. It had become THE comic book. You were shunned for reading Batman. Laughed at for reading Superman. But if you read X-men, you were part of the team. And despite experiencing something of a resurgence in recent years with all of the new movies, games and books, I don't think that the X-men will ever be quite as popular and as 'absolute' as they were back when all a kid had was a comic and some trading cards.

15
Quote O' Matic
Hordak: "[singing] Up, up and away, in my wicked doom ballon! -Hordak"
She-Ra: Princess of Power 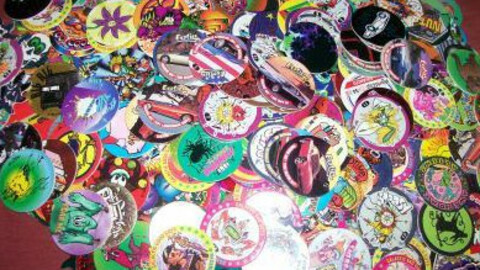 29
Hoju_Koolander
The POG Log
Exploring the brief, but memorable reign of POGs

8
Ray_Donahue
Old vs. New: Batman vs. Batman Begins
Part 1 of a series of articles comparing the modern Batman films to the original films.
An unhandled error has occurred. Reload Dismiss