Let's start with a short comic poem about the beast quoted by the hobbit Samwise Gamgee, based on traditional bestiary lore. It is called Oliphaunt.

Grey as a mouse,
Big as a house,
Nose like a snake,
I make the earth shake,
As I tramp through the grass;
Trees crack as I pass.
With horns in my mouth
I walk in the South,
Flapping big ears.
Beyond count of years
I stump round and round,
Never lie on the ground,
Not even to die.

Oliphaunt am I,
Biggest of all,
Huge, old, and tall.
If ever you'd met me
You wouldn't forget me.
If you never do,
You won't think I'm true;
But old Oliphaunt am I,
And I never lie.

Isn't that fun. Anyway, in the fictional lands of J.R.R. Tolkien's Middle Earth, a mumak (plural mumakil) is a pachyderm of the southern land of Harad, similar to but much larger than our own elephant, and said to be the great, great, GREAT granddaddy of the African and Asian Elephant. The terms mumak and mÃ»makil were used by everybody at Gondor. Hobbit folklore called the Mumak, Oliphaunts.

The oliphaunt is described in The Lord of the Rings: The Two Towers (I think it's Chapter 3 of Book IV, you know.). Samwise Gamgee expresses a desire to see one and tells of Hobbit-lore of them being "big as a house."

Later in Chapter 4, the creature is first called "mumak" by this guy named Damrod, one of Faramir's Ithilien rangers. Sam then sees one as big as a "moving hill." the Tolkien master relates that Sam's "fear and wonder" may have enlarged the animal called "mumak" in his eyes.

Employed as a totally HUGE beast of burden by the natives of Harad, the Haradrim, the mumakil were also used in battle during the wars of the Third Age of Middle Earth. In the War of the Ring, they were used by troops in Ithilien and in the Battle of the Pelennor Fields, much like war elephants of the real world. In battle, they carried tower-like structures (corresponding to the real world's howdahs) on their backs.

These beasts had skin so thick, it was almost impenetrableâ€”making them almost invulnerable to arrows. The only known way to kill one was to shoot it in the eye, doubtless a very difficult task to perform. Also, as with real elephants, Watch out, horse, for those of your kind who are unfamiliar to them, Do not go near them! But that made them effective against enemy cavalry. J.R.R. implies that the creatures became extinct and that its "kin that live still in latter days are but memories of his girth and majesty." said who? J.R.R. Tolkien!

And what's the origins of that word?!

Well, The word oliphaunt is a variant spelling of the archaic word oliphant. It could mean a WHOLE lotta ways, like "elephant", "ivory", "elephant-tusk", "musical horn made of an elephant tusk", or "a musical instrument resembling such a horn". It shows up in Middle English as olifant or olifaunt, and was borrowed from the Medieval French word called olifanz. The French word owes something to both the Old High German word, olbenta "camel", and to that Latin word elephantus "elephant", a word of Greek origin. OHG olbenta is a word of old Germanic origin; cf. Gothic ulbandus also meaning "camel". But the form of the OHG and Gothic words suggests it is also a borrowing, perhaps indeed directly or indirectly from Greek elephas (ÎµÎ»ÎµÏ†Î±Ï‚) literally "ivory", though apparently with some confusion as to the animal the word referred to. The word survives as the surname "Oliphant" found throughout the English speaking world (used by people such as the political cartoonist Pat Oliphant). The Clan Oliphant is an VERY ancient Scottish family, originally of Norman origin.

The most famous use of the oliphant is in The Song of Roland "The oliphant is set to Roland's Lips;" Roland got p'wned and never get to call for help at the Battle of Roncevaux in 778 until it is too late for him and his comrades. The oliphant is echoed in The Lord of the Rings by Boromir's horn and counterposed by Helm's horn and the horns of Buckland.

Tolkien was born in South Africa, a country in the dark continent of Africa, though he was taken to England at the age of 3; in Afrikaans, just as in the Dutch language, the word for elephant happens to be olifant.
Well, in adaptions, The mumakil appears in Rankin-Bass's 1980 animated version of The Return of the King as part of Mordor's attack force. They look a WHOLE lot like woolly mammoths with evil red eyes and two large bumps on their heads like Asian elephants. No Haradrim appear in sight in this movie but the beasts are instead utilized by orcs and trolls.

22 years later, Mumakil later appear in Peter Jackson's The Lord of the Rings: The Two Towers, where Faramir and his men scares the living hell out of two of them along with a whole buncha Haradrim.

In The Lord of the Rings: The Return of the King, they play a key role in the Battle of the Pelennor Fields, where the Rohirrim led by Eomer and Eowyn's Uncle Theodon have lost SO MANY men due to a direct charge against them (quite counter to real-life tactics). However, they are ultimately defeated by the Army of the Dead led by the three brave amigos, Aragorn, Legolas and Gimli. Legolas, one of the three brave amigos, also kills one beast all by himself, climbing up it and shooting it in the head piercing the brain stem, in fashion similar to the way he had previously dispatched a cave-troll in the tomb of Balin in the mines of Moria in Peter Jackson's The Lord of the Rings: The Fellowship of the Ring.

Here they're portrayed as being much, much, much, MUCH larger (50-100 feet or 15-30 metres tall) than today's elephants with two sets of large tusks, one set in the upper jaw with a further set of smaller tusks, and another in the lower (like in the extinct Deinotherium). The giant tusks hang close to ground level, and carry either spiked sleeves for hitting enemies, or house a broad barbed wire suspended between them, used for simply grinding anything in front of the animal down.

Also, their skin is cut by blades and pierced by arrows relatively easily, though their hides are so tough they seem to shrug off any pain. Legolas uses embedded arrows as handholds and footholds to climb up to one animal's back.

Theodon's niece, Eowyn p'wned one with a sword in each hand by cutting the hamstring of its back legs, doing the same to another with a thrown spear before she is dismounted, and her brother Eomer incapacitates two by p'wning one of the lead hoodlum guys of the Haradrim riding on top with a well-aimed spear throw. The man topples down with the spear still embedded in him, and the apparatus used to steer the mumak by pulling the ears is disrupted, causing it to turn to the side and knocking over the other. Ouch! I mean, LOL!

Peter Jackson mentions in the DVD commentary for the 4-disc Extended Edition of The Return of the King that the scenes with the mumakil are deliberately less violent and shorter than the original cut of the Return of the King (i.e. Oliphaunts were originally going to be required to be shot in the eyes to be killed, but this was cut to avoid nightmares), because test audiences may have been reminded of the infamous abuse of elephants who totally freak out in the circus (ala, Walt Disney's Dumbo) and given the creatures unintended sympathy!!!

He was also saying that they specifically haven chosen not to make the mumakil trumpet with their trunks, as elephants are commonly imagined to, but to bellow a slowed-down and distorted lion's roar...or maybe even the beginning and the end of one. This is, once again, to keep the audience from thinking of them as sympathetic creatures rather than TOTALLY evil monsters. As another part of this effort, many shots were added of mumakil p'wning and crushing Rohirrim soldiers, horse and all.

Noting their huge proportions and role in the Battle of the Pelennor Fields as shock troops, some of you have compared Mumak to the Imperial AT-AT walkers of Star Wars Episode V: The Empire Strikes Back (1980), as MAD magazine has done by juxtaposing one of the latter with them in a parody.

In the game, Rome: Total War, typing in the word 'oliphaunt' into the console will create larger elephant units. Mumakil appear in the roguelike computer roleplaying game NetHack as slow but powerful monsters.

Well, I love that creature. I better include the mÃ»makil in one of my story ideas, Intolerance (not the critically acclaimed 1916 D.W. Griffith Classic). In that story idea I've made up, in 2119 New York City, Through the eyes of a high school senior named Thomas Robinson, his African American Gangsta friend, Joseph "Bouncer Joe" Jackson, who was branded AWOL in the ninth grade, get himself expelled from his high school after one incident involving Bouncer Joe and his hoodlum friends sticking a switchblade to a mumak (or oliphaunt) owned by a local alien race-culture, so Bouncer Joe decided to fight back against authority and society, causing the hatred, bigotry, racial and urban tensions between youth street gangs of all races and colors to smolder and build before EXPLODING INTO VIOLIENCE!!!!

In the end, they are ultimately defeated by a gasoline storage tank explosion. At the conclusion of story of Intolerance, Bouncer Joe immolates himself atop a huge gasoline storage tank. He may scream a line similar to James Cagney's "Made it Ma! Top of the World!" scream in White Heat (1949), just before Joe and the tank explodes. The erupting mushroom cloud, which wipes out the gangs, the SWAT team, the police, the national guards, the US troops, and even the Giant Mumakils, might situate Joe's crazed violence within the 9/11 and Post-9/11 ages and its nuclear anxieties. Bouncer Joe may be a violent black gangsta, yet the energies of violence embodied in modern society and represented by the atomic weapon and the mushroom cloud are infinitely greater. Intolerance's Ending may suggest a neuclear, Post-9/11 apocalypse. Joe will make it to the top of the world and now the world will end if he will. 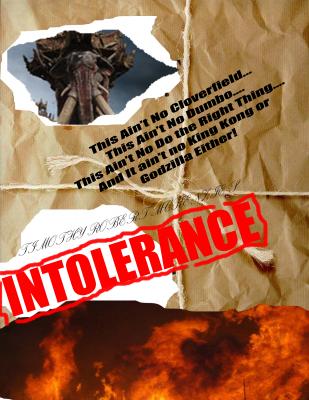 Well, Mumakil is big as a house, looks like an elephant. And He is truly the fictional ancestor of the African and Asian Elephant. Well, you better enjoy this J.R.R. Tolkien creature, or go watch Peter Jackson's Lord of the Rings Movie to enjoy those beasts fightin' for the Haradrim.

That's all, folks!
4
Login To Vote!
More Articles From timbox129 9
Quote O' Matic
Trixie and Junior: "Trixie: You dad's not a bad guy. Junior: Yeah. He takes a lot after me. Trixie: Junior, I'm sorry I squirted you with the fire hose. Junior: That's OK. And I'm sorry I made you barf on the 'Crazy Dance.' Trixie: Pals? Junior: Pals. -Trixie and Junior"
Problem Child 2