An explanation of why I love the movie "Working Girl".
By Caps_2-0
On
When I did my article on topics they could've talked about in the 1988 episode of "I Love The 80s 3-D", I had mentioned "Working Girl". I had concentrated mainly on the brief bits of nudity, but that was just my guy side coming out. I really do like this movie, mainly because it paralleled many events in my life, both before and after I saw it.

1.) This piece contains spoilers for the movie. If you haven't seen it, go for it. It's a great film. You can come back to this piece later.

2.) The events in my real life aren't chronological with the events in this movie. I'm going to do some time-bending with this.

The movie is set in 1988 New York City. I first saw it in my small hometown in 2000. I found that I could relate to it quite well. 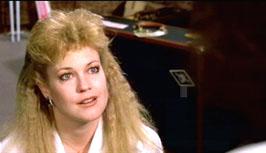 She's been working as a secretary for several years, but her ambition is to be a mover-and-shaker in the world of big business. When not working or studying at night school, she deals with her boyfriend Mick Dugan (Alec Baldwin). Dugan is an emotionally abusive and sexually-inclined mook. In other words, Baldwin is playing himself.

As a parallel to my real life in 2000, I was a young high school student whose ambition was to become a writer. My job was as a page at the library, and when I wasn't doing homework or putting away books, I was dealing with an emotionally abusive and sexually-inclined girlfriend named "Joan" (Name changed to cover my ass).

In the movie, Tess is in emotional upheaval after a brutal instance of sexual harrassment. Given an opportunity to get work in a new department, she instead finds herself being set-up for sex with an arbitrager named Bob Speck (Kevin Spacey). 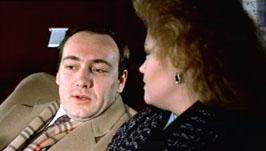 In my real life, I was dealing with physicality of a different sort. I've always been in somewhat bad condition health-wise, so gym class was Hell for me. Once again, each problem was solved in a similar, yet different way.

The character on the right is David Lutz (Oliver Platt). He was the one who set her up for the meeting with Bob. She gets revenge by typing the following message onto the stock ticker:

"David Lutz is a sleazoid pimp with a tiny dick!".

In my life, I had enough of physical education. In the 12th grade, the person who would've been my gym teacher had an Italian name. I made a few mafia jokes and that was the ballgame for my gym years.

Each one of us got a different treatment. In my real life, I was given extra time with the school psychologist. I think it was because they wanted to figure out where I was at with my words and my disability (I have high-functioning autism and it's rough for me verbally and emotionally...PM me if you want a further explanation).

In the movie, a personnel director (Olympia Dukakis) gives Tess one last opportunity to prove herself. She is transferred to the offices of Katharine Parker (Sigourney Weaver). A mergers-and-acquisitions talent, Katharine is also manipulative, somewhat bullying, and forever twisting things around.

I've had to deal with several real-life Katharines. For example, during my brief time in college, I had my writing belittled by my teacher. There's nothing like going from being the best writer in your high school class to the worst writer in your college class. The teacher didn't offer constructive criticism...Just insults.
The manipulation was evidenced in my middle school years. At the various middle school dances, I always won the contests. I eventually found out that the only reason why I won all of them was because if I didn't, then I would go crazy. In retrospect, it feels odd to think about the fact that I may not have been a good dancer. In all honesty, I probably would've gone crazy. I have more of an anger streak than a naked man who just found out that he was fired and that his children were actually fathered by the pizza guy.

As for twisting the facts around, I had to deal with that on various message boards over the years. For example, I was extremely into correcting people's errors on one message board, to the point where I was told in various angry manners not to correct people anymore. Just like clockwork, a few months later, somebody engages in similar behavior to mine and says that it's okay because he only did it a few times. He wouldn't play by his own rules...It's that kind of goalpost-moving that makes me question what the Hell is going on.

Back to the movie: 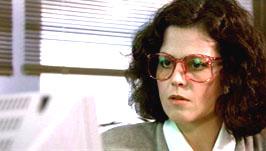 Tess comes up with a merger idea which is promptly stolen by Katharine. This is similar to a time back in 1994 when I made a John Wayne Bobbitt joke one school morning, and by the afternoon, everybody was telling it, but nobody was crediting me, not even the people who were around when I first told the joke that day.

While on a ski vacation, Katharine injures her leg and ends up the hospital. This is one instance where real life sadly didn't mirror the movies. All the people who dicked me like a 5-dollar whore on Good Friday have maintained perfect health with next to no injuries.

Anyway, Tess sees this as an opportunity to get her ideas back and go to the top. She has to change her look, though.

The Staten Island trashy-chick look won't get her anywhere, so she goes from this: 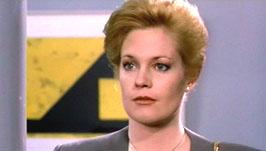 In my life, I've been looking for a girlfriend for over 5 years. I'm always shaving and combing my hair, wearing new clothes and trying to act happy. None of it works, but it has to happen eventually...Right?

He works with her to bring the deal to completion and eventually falls in love with her. In my life, various websites have worked with me to refine my writing skills. In the late 90s and early 00s, I wrote "Animaniacs" and "Pinky And The Brain" fan-fiction on the Toonzone boards, back when they were just the Warner Brothers Club. I moved from writing fan-fic to doing reviews for the 80s Movies Rewind. I don't contribute to that website as much as I used to, but by writing reviews, my critical skills improved. I've gained an ability to separate the wheat from the chaff and that's come in handy for my work on this website, where I've done my takes on various pop-culture issues of importance to me and a good chunk of my generation.

The movie comes to a head when Katharine returns to find that Tess has taken back her idea and also stolen Jack from her. 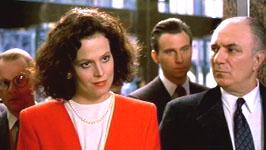 Tess, with some help from the society pages of the Daily News, makes a merger of two radio conglomerates possible. In return, she is rewarded with an executive job and her own office with an outside view of the city.

I've come a long way and, although I'm still dealing with bullies, I have persevered. 10 stories, more than 40 reviews and 5 articles (and counting)...I, too, have achieved my dream. 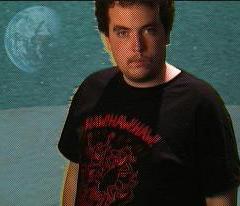 On the left: A character who taught me the value of determination. One the right: Me, a writer who always thinks ahead and acts forward.

I really loved "Working Girl", especially the song "Let The River Run" by Carly Simon. It was just so inspiring:

"It's asking for the taking...Trembling, shaking.
Oh, my heart is aching.
We're coming to the edge, running on the water,
Coming through the fog, your sons and daughters.
Let the river run...Let all the dreamers wake the nation.
Come, the new Jerusalem".

See you there.
-2
Login To Vote!
More Articles From Caps_2-0

0
Quote O' Matic
Stewie: "You know what I do Meg? I spit in your mouth while you sleep."
Family Guy