Boxing for kids all over the world to enjoy. Repeatedly punching grown men in their face is sheer pleasure.
By eep
On 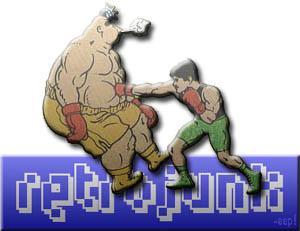 Punch–out was originally released as an arcade machine in ’86 for kids all over the world to enjoy. Punching the teeth out of characters such as Glass Joe and Von Kaiser repeatedly in the face was pure pleasure, but for a quarter, the game’s satisfaction soon ran thin. I for one didn’t give a crap about some stupid boxing game, until it was released for the Nintendo Entertainment System in ’87, with it’s new title “Mike Tyson’s Punch Out!!!.” 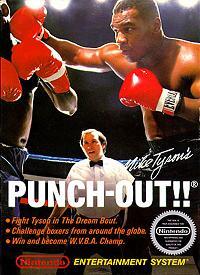 I overheard my grandfather talking about Tyson’s insanity in the ring many times, so the name was quite familiar. After learning that Tyson actually makes an appearance in the game, I had come to this conclusion: I must kill the finial boss of Mike Tyson’s Punch Out, Mike Tyson himself! If I had only owned this game, I too would have proved to my grandfather that I was clinically insane by going head to head with Mike Tyson. Sadly, that Christmas of ‘87 I had only received, THE POWER GLOVE! Missing only one element missing from rapture, I traveled far and wide for a video rental that had carried a copy of Punch Out…South Park Video was the only one. Rest in peace S.P.V., rest in peace.

Running home and perhaps tripping in excitement, I had finally made it inside my living room dead center in front of the television. Slowly reading the manual for The Power Glove and realizing that it was a piece of crap, I threw it into the corner of my room, later to be used as an awesome looking laser tag glove.

The Power Glove was and will forever be a piece of shit; I had such high hopes for that accessory. Yeah, so I thought I could actually PUNCH with the glove, but NO! I had to learn sign language before executing the directional pad and the A or B button with the glove. I still have the Velcro stickers that held the gloves sensors in place on my television, you bastards.

Ramming the Punch Out cartridge into my NES and pushing power, the screen went black and faintly rang a bell. WAM! It was Mike Tyson’s ugly face right in the middle of my television with his missing teeth and all. Amazed with the 8-bit genius, I proceeded by pressing start (I was so excited I didn’t care for game introductions), leaving me to my corner to fight against Glass Joe.

Glass Joe is the most pathetic fighter in the game and could be knocked out in 42 seconds, though at the age of six, I didn’t know the game’s strategies. The referee walked into the ring and called the start of the fight. HEY! It was the lovable Mario from Mario bros! Surely he’ll judge in my favor, I bought all of his games as of date. I’ll just have to impress him with my boxing skills, Nintendo boxing skills.

didn't mario's count-out look as if he were dancing?[/size][/align]
Throwing punches at Glass Joe like a mad child and being blocked of all, I had realized that the little heart counter in the top left hand corner wasn’t my lives, but my stamina. Stupid video rental stores and not trusting the customers with the manual, I hate you all. After being slaughtered for three rounds but with no knock out or even a technical one was in sight, they had to bring in Mario to judge on the winner. I began to think of all the great times me and Mario had murdering Koopas and saving the princess, it was beyond a doubt that I would triumph in his favor. The bastard pointed in Glass Joe’s corner! YOU FAT PLUMBER! I’ll never buy another game from you again (I bought Mario Bros. 3 the next summer).

My friends at the time and I would take turns renting the game at a mere two dollars a night just to bask in the televisions glow of semi-cartoonish boxing violence. Our renting scheme fluctuated between “Double Dragon” and “Mike Tyson’s Punch-Out!!” for weeks ahead, but we mostly chose Punch-Out. Now, all the kids on our block found it impossible to reach Tyson, so we agreed to put our differences aside for the moment and join hands across the block to defeat this monster named Mike Tyson. Taking turns battling opponents such as Bald Bull and The Sandman began to take a toll on our second grade video game egos. Until one fateful day an early childhood friend whose name is a blank to me at the moment, walked up to us in utter joy holding what looked like a note. I don’t know exactly how he got his hands on the continue code to fight Tyson, but it was staring us right in our faces on a ripped out piece of trapper keeper loose leaf. Written in a child’s hand writing between the ages of five to seven “Mike Tyson Code: 007-373-5963.” We ran to the nearest house, scamming two dollars from who ever lived there to rent “Mike Tyson’s Punch-Out!!” for what seemed to be the last time we would ever rent it for Challenging purposes again.
We were in for a surprise.
It was time to fight Tyson once and for all and I wasn’t the brave one who dared to pick up that NES control. One of my early childhood friend’s whose name is once again a blank to me, typed in the code and pressed start to confirm it as we all stood back to watch (let’s say his name is Timmy the Turtle) him get murdered by what we believed to be the best boxer in the world. Timmy the Turtle was in his corner staring at how HUGE Tyson was on the television…Mario called “Fight!” This was it, Timmy the Turtle was face to face to the ogre who terrorized us for the last few weeks, taunting us on how weak we were not reaching him. Timmy the Turtle will bury you Tyson! Timmy the Turtle will Prevail!! 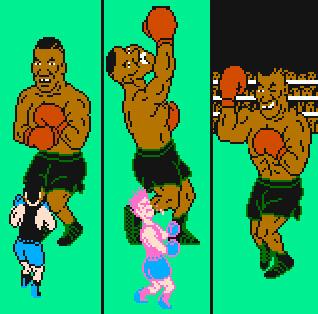 A few seconds later, I’m almost confident our jaws had dropped and said, “What the Hell?!” when Tyson threw an uppercut into Timmy the Turtle’s little face knocking him out cold. Just one connecting punch from Tyson meant certain doom for the player. We must have passed the control all through out the day, not even forcing Tyson to the mat. It was hopeless. I had giving up on trying to beat Mike Tyson. My childhood dreams of becoming a professional boxer had been crushed. We returned the game back and proclaimed the game retired from our block.

It was now 1991, moving on with my life and trying not to remember the weeks I wasted on “Mike Tyson’s Punch-Out!!,” Mike Tyson was mentioned on the News; he was accused of raping a woman. Tyson went on trial in Indiana charged with the rape of a Miss Black America Contest contestant named Desiree Washington on January 27, 1991. Tyson was found guilty of the rape on February 10 and was imprisoned for 3 years (Under Indiana law, a defendant convicted of a felony must begin serving his prison sentence immedately after the sentence is imposed). As a result, Tyson did not fight again until 1995.

A few weeks later South Park Video had a new game on the NES shelve, “Punch-Out!!.” I picked up the box and read the description on the back to find out the difference between “Mike Tyson’s Punch-Out!!” and just plain old “Punch-Out!!.” In this 1991 version, Mike Tyson wasn’t featured at all, being replaced with a character named “Mr. Dream.” Considering the fact that Tyson was in a whole lot of trouble, Nintendo perhaps felt it would be best if they re-released the game to clear their name of sponsoring a criminal. I rented it just to see if it had any major differences.

Besides the introduction and the obvious absence of Tyson’s ugly face, the game was exactly the same. Even the continue code that brought you to Tyson’s ring worked, although it wasn’t Tyson who is waiting for the player to reach the end of the game, its Mr. Dream! 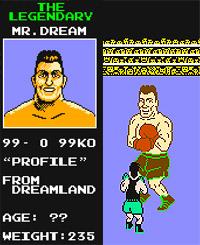 Apparently Mr. Dream is from Dreamland; his age is unknown and weighs in at 235 lbs. Did I mention he’s white? He’s white.

I hope Nintendo didn’t think that gamers would realize that Mr. Dream is the EXACT same outline as Mike Tyson’s character in the game, only filling the skin with a light peach color instead of dark brown. Though, I do have to give credit where credit is due. Nintendo did in fact spend a good ten minutes creating a new crew-cut white man face to replace Tyson’s. TA DA! A brand new GAME! What garbage! What sucked more was when I finally stepped into the ring with Mr. Dream, the game’s programming still had that one punch knock out Tyson had. I now had two characters that I would have never defeated until 1997, when I download my first NES emulator. If it wasn’t for your save options Nesticle, I would have never seen the credits of “Mike Tyson’s Punch-Out!!” and just plain old “Punch-Out!!.” I thank you Fecal Lord and the rest of the Bloodlust programmers, I can now hold my head up high when I enter an arcade and say, “I’ve beaten Mike Tyson and Mr. Dream!” 21
Quote O' Matic
Gruffi: "Humans are nothing but trouble! -Gruffi"
Adventures of the Gummi Bears