Here comes the fourth wave!
By Captain_Retrograde
On
Another year, another round of my custom Saturday morning blocks. Only two shows (Bionic Six and Street Fighter) from my last two blocks remain and have taken the Sunday morning slot. With that, I've brought up my lineup for my fourth block! I'm already five episodes in on each show, but figured I would like to see your thoughts on them. Featuring three times the space battles and two times the Malcolm McDowell, Tim Curry, and Tony Jay, this is Custom Saturday Morning Block #4. (Series info courtesy of Wikipedia.)

Based on the 1992 toyline from UK-based Bluebird Toys (as the boys toys answer to Polly Pocket), "The series follows Max [voiced by Rob Paulsen], an adventurous preteen boy who receives in the mail a small statue of a fowl, inscribed with Egyptian hieroglyphs whereof the translation states: "You have been chosen to be the cap-bearer. Go to the mini-mart and wait for a sign, Mighty Max". Shocked by the message, Max drops the statue, shattering it and revealing a red baseball cap emblazoned with a yellow "M", which he dons.
Upon arriving at the mini-mart, Max is chased by a lava-monster sent by antagonist 'Skullmaster'. As Max flees, the cap teleports them to the Mongolian desert, where he befriends Virgil [Tony Jay], a nearly omniscient Lemurian whose appearance is that of an anthropomorphic "fowl" (a running gag in the series is that Max refers to Virgil as a "chicken" to which the Lemurian replies "Fowl, actually"), who explains that Max's reception of the cap was prophesied c. 3000 B.C. Thereafter Max, Virgil, and Norman [Richard Moll], his Viking bodyguard, travel together around the world, defending Earth against the minions of Skullmaster [Tim Curry], who is responsible for the downfall of the Lemurians and the people of Atlantis. Norman is supposedly immortal and identified as or with Sir Lancelot, Thor, Samson, and Hercules. Most plot-driving episodes involve Skullmaster or one of his monstrous followers; but in many episodes, Max is required to stop an independent villain. While all episodes involve travel across Earth, one involves time travel, and the portal can even extend into the astral plane (as seen in the episode "Souls of Talon")."
I vaguely remembered this show from seeing brief glimpses on TV, as well as the toys owned by my cousin. Upon reading about how mature it was for its time, and having recently auctioned off the chassis of one of the larger playsets, I decided to see what all the fuss was about. Five episodes in, and I now understand why it has its devoted cult following. (It also helps that I met Rob Paulsen himself a while ago.)

"BattleTech is an animated television series based on the BattleTech fictional universe, produced for syndication by Saban Entertainment in 1994. The series ran for 13 episodes and focused on the character of Adam Steiner, a military officer in the distant future who struggles to liberate his home planet from an attacking faction.
The series was noteworthy for its blending of animation techniques, with computer animation used to depict most battle sequences and traditional animation used for most other scenes."
This is probably the second TV show based on a tabletop game I've ever seen (the first being reruns of the 80's Dungeons and Dragons cartoon on Fox Kids in 2002), and is also my only experience thus far with Battletech. I found out about it while once again scouring Wikipedia entries on different cartoon blocks. I've seen plenty of mecha shows, but nothing like this. In a way, the 'noteworthy blending of animation techniques' reminded me of a show from my second block, Space Strikers--novel for its time, but blown out of the water by today's CGI.
3. Captain Simian and the Space Monkeys
(Broken YouTube Link Removed)
"The show premiered on September 7, 1996 and ended after 26 episodes on June 21, 1997. It was produced by Hallmark Entertainment, Monkeyshine Productions.inc, and distributed by Bohbot Entertainment and aired as part of a syndicated animation block known as BKN. Captain Simian & the Space Monkeys ran for four years on American and international TV.
During the monkey-manned spaceflights of the 1960s, one rocket veered off course, sending a chimp named Charlie [voiced by Jerry Doyle] off into the outer reaches of space. After many years, Charlie’s craft was discovered by the most intelligent race in the universe, the " " (pronounced by not saying anything, then followed with the explanation that their race is so advanced that their name cannot be pronounced; only thought. The running joke then had the other space monkeys asking, “The who?”).
Charlie was given enhanced intelligence, weapons, and futuristic technology, along with a charge to protect the universe from the evil Lord Nebula [Michael Dorn]. One of the more unusual villains in cartoon history, Nebula was a half-human, half-black hole who hoped to become a complete black hole, swallow the universe in a “Big Crunch,” then remake it in his own image. His one problem was that, being half human, he was still susceptible to human ailments, such as the common cold and stomach aches.
To aid Charlie (who was given the title "Captain Charlie Simian"), The " " allowed him to recruit a team of fellow earth monkeys: Shao Lin [Karen Maruyama], a Chinese golden monkey with swift fighting skills and serene wisdom; Spydor [Dom Irrera], a wisecracking little spider monkey with a long prehensile tail; Dr. Splitz/Splitzy [Maurice LaMarche], an orangutan with a scientist/madman split-personality; and Gor [James Avery], a big, strong gorilla who wrecked the intelligence-enhancing machine before he got a full helping.
The group cruised the stars in their ship, the Primate Avenger, battling Nebula and his cyborg monkey henchman, Rhesus 2 [Malcolm McDowell], and searching for the ever-elusive bananas. The monkeys mixed fast-talking humor with fast-paced action."
Now THIS I remember glimpsing only once on TV--after that, nada, until I found it again during my usual scouring the Wiki. After reading about it further, I became intrigued by the prospect of a space opera spoof with primates. And so far, so good--this is light-years better than the movie Space Chimps, and that's saying something.

4. Wing Commander Academy
(Broken YouTube Link Removed)
"Wing Commander Academy is an American animated television series created and produced by Universal Cartoon Studios, along with a team led by Larry Latham. The show was based on the Wing Commander franchise and loosely served as a prequel to Wing Commander. The show's premiere airdate was September 21, 1996 on the USA Network's "USA Action Extreme Team" block. The series' last episode aired on December 21, 1996.
episode "Recreation" is the final part of four-part crossover with several other shows that aired as part of USA "Action Extreme Team" programming block:
-Mortal Kombat: Defenders of the Realm (1996, US, animated): episode 9 "Resurrection".
-Savage Dragon (1995–1996, US, animated): episode 21 (208) "Endgame".
-Street Fighter (1995–1997, US, animated): episode 22 (209) "The Warrior King"."
Up till now, the only way I knew of the Wing Commander franchise was the lousy movie based on it (which I haven't seen). My curiosity about the Warrior King crossover saga is what got me to see an episode of this series some years ago. When I was building up this block, I felt I should give the rest of the show a shot, and I have read that it's much-better received than the film. Plus, the voice cast is pretty good (there's Malcolm McDowell again), so I'd say we're off to a good start. (And there's a new DVD set out--makes me think.....)

5. Xyber 9: New Dawn
(Broken YouTube Link Removed)
"Saban's Xyber 9: New Dawn is an animated television series produced by Bokabi and Saban Entertainment. It originally debuted on the Fox Kids network on September 25, 1999. Only 10 episodes aired before it was cancelled on December 4, 1999. Soon after, it was aired in its entirety on Irish television network RTE Two in the summer of 2001. Six years later, it appeared on Toon Disney as part of the channel's Jetix line up. In addition to re-airing the first 10 episodes, the remaining 12 episodes aired from February 24, 2007, through April 8, 2007, although these episodes were made in 2000.
Jack [voiced by Jason Marsden], a precocious, blonde fifteen-year-old who is an orphan, is given the title of the Chosen One. The people of Terrana, a futuristic realm that has is amidst a war, relies upon him as the last hope to save their civilization. If Jack can achieve the Herculean task of destroying Machestro [Tony Jay], the evil ruler of the underworld, he will be named king. Jack's greatest weapon against Machestro is the sophisticated computer Xyber 9 [Rene Auberjonois] that is in the form of a staff. With Xyber 9's power, Jack journeys through Machestro's underworld and to other futuristic lands, fighting intergalactic evil with an ever increasing band of allies. In order to enfeeble the Chosen One, Machestro tries desperately to snare Xyber 9, for without the powerful computer, Jack would be defenseless. And with it, Machestro could spread his disease of evil throughout Terrana and beyond, conquering other worlds and ruling in his tyranny."
THIS is a show that I barely remembered till I rediscovered the only action figure I had from the toyline--Mick, an ally of Jack's (voiced by Quinton Flynn, whom I've met): 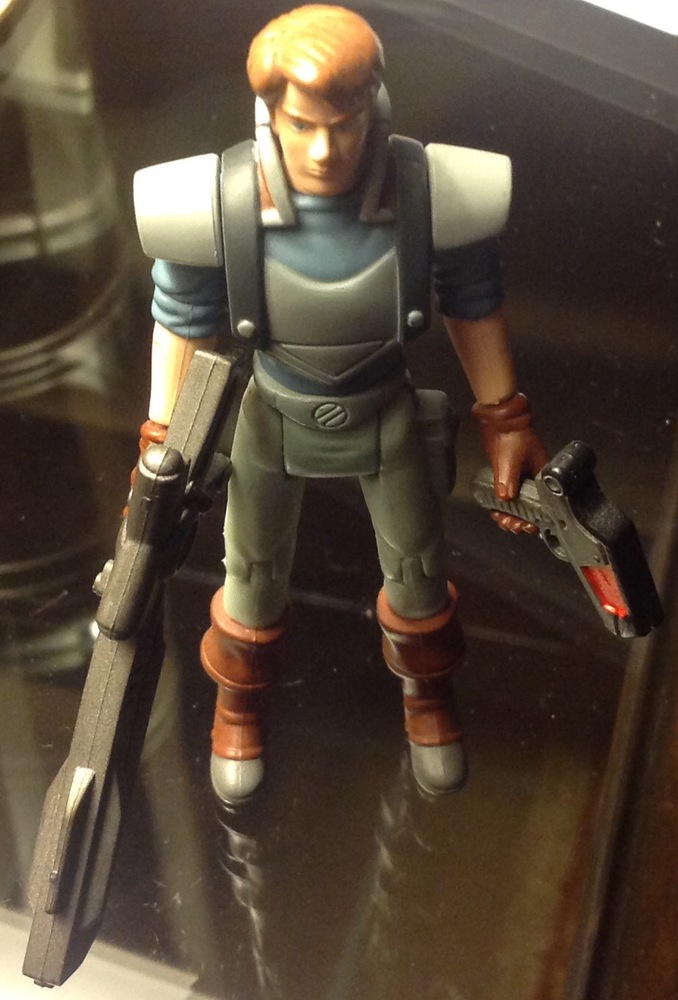 I remember seeing the bumpers and ads on Fox Kids promoting it, and of its original run, I only caught two episodes. This was during my peak years as a Fox Kids devotee where I made it a weekly ritual.
Seeing this show again, and reading about the mythology in it, made me think that it could have been the Avatar: The Last Airbender of its day. Interesting premise, great designs, and a decent cast of characters--makes me wonder who at Fox decided to pull the plug so early. I look forward to seeing how the rest of the saga unfolds--and now I have a yet another new thing to collect......

And there ya have it, folks! Your thoughts on my selection would be much appreciated. Tune in next time for my next installment of "The Also-Rans", where I'll be covering an obscure iteration of the most powerful man in the universe.
8
Login To Vote!
More Articles From Captain_Retrograde

3
Quote O' Matic
Chief: "Greg, let's go to the map! -Chief"
Where in the World Is Carmen Sandiego?