My Interview with Dr. Light

A factual parody
By Strykor
On
(Note: Although some of these facts come from the Megaman web site, I will be playing fast and loose with them.)

Dr. Thomas Light has been a bold innovator in the field of robotics. His creations have improved the lives of everyone in the world, and his greatest creation, Megaman, had protected this world from the evil machinations of Dr. Wily. Today Dr. Light has agreed to an interview, as well as a tour of Light Labs.

Strykor: Dr. Light, how did you get your start in robotics?

I graduated from robot engineering school in 19XX, valedictorian, after which I partied for four years. After I sobered up, I went into partnership with my old classmate, Dr. Albert Wily.

Strykor: The same Dr. Wily that flipped his lid and started on a world domination bender?

Dr. Light: The very same, though he wasn't always like that.

Just then, Dr. Wily appeared on the video monitor.

"I heard that you were doing an interview, Thomas? Why wasn't I invited?"

Sensing a chance to forstall violence (or at least a Jerry Springer cat-fight), I said, "I'm to interview you next month. Can you wait until then?"

Thinking it over, Dr. Wily then said, "Alright. See you in a month." He then disconnected.

"Or whenever I decide to get to him," I told Dr Light. "Now, back to the interview."

Dr. Light: Now, as I was saying, Dr. Wily wasn't always a nutcase. I think he became jealous as I became more recognized with robotics than he did. But before that, we worked together to build our first robot, Protoman.

Strykor: So this was your first robot?

Dr. Light: Yes. Originally, he was built to be out lab assistant, doing tasks that were too dangerous for Dr. Wily or myself. He was also the base model for six other robots.

Strykor: Alright, but why did he have a blaster and shield?

Dr. Light: Part of those tasks was weapon testing for the government. Unfortunantly, Protoman proved to be unstable. He ran off before we could run a diagnostic program and repair him. After he left, we went back to work on those six robots: Guts Man, Cut Man, Elec Man, Bomb Man, Ice Man and Fire Man. (Writer's note: These robots, as well as their photos, will be in a future article.)

Strykor: So you and Dr. Wily built those robots together?

Dr. Light: Yes, we did. After they were done and sent into the workforce for testing, I decided to build a new lab assistant, which I called Rock. (Writer's note: As far as I know, there is no 16-bit image of Rock [Megaman in normal clothing], and I'm not going to take the time to look.) At the same time, I also decided to build a female robot, who I dubbed Roll, and was to be his sister.

Strykor: She looks cute. But why do you only have a picture of her and not of Rock in his regular clothes?

Dr. Light: Well, I was out of film when I built Rock, and when I upgraded him to Megaman, I burned his original clothing.

Strykor: Ah, Megaman. Now we get to the heart of this article. Why did you decide to upgrade Rock into Megaman?

Dr. Light: After I finished Rock and Roll, Dr. Wily flipped out, took those six robots, and reprogramed them for destruction. After Rock pleaded his case to let him fight Dr. Wily, I had no choice but to rebuild Rock into Megaman. I gave him the ability to copy the other robots powers so that he could have the firepower needed to defeat Wily. But over time, Wily grew craftier, so I had to build upgrades and support units to help Megaman.

Dr. Light: Take Rush for example. A robotic dog that can transform into various vehicles and armor upgrades, like the Rush Jet. That mode allows Megaman to traverse dangerous terrain without using those annoying timer blocks.

Dr. Light: Oh, that's Eddie. I built him to carry Energy Pods and other stuff to Megaman out in the field.

Strykor: Makes sense. What's the story behind these two?

Dr. Light: Oh, those are Ran and Beat. (Writer's note: Ran is what Beat is in the original Japanese games.) These robots were built by Dr. Cossack, a Russian robotics expert, as apologies for helping Dr. Wily when his daughter was kidnapped. Originally, we were to get Ran, but a freak electrical storm affected the teleportation sequence and we have no clue where he was sent, so we got Beat instead. Beat can home in on enemy targets, as well as lift Megaman out of a hole, so long as there's a platform near by, as he can't hold Megaman for long.

Strykor: And who's this big lug?

Dr. Light: That is Auto, my latest lab assistant. He can make energy tanks and other stuff for Megaman a lot faster than I can now. He can also help Megaman out in the field by providing additional weapons fire.

Strykor: A few months ago, there was something going on involving Dr. Wily and alien technology. Can you explain what happened? 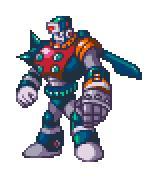 Dr. Light: A great battle was going on out in space between a Good robot and an Evil robot. That battle took it's toll on both of them, and they crashed on Earth. Megaman brought the Good robot to me for repairs. Later we found out his name was Duo. He has the ability to purify any being, living or robotic, of that Evil energy, so long as it hasn't taken a complete hold of said being, and heal them.

Strykor: Does Megaman have any rivals?

Dr. Light: I'm glad you asked that. A couple of years ago, Dr. Wily created a robot based off of Megaman's design plans. I guess I shouldn't have put them on display on my blog page. Anyway, this new robot is called Bass, and since Megaman has Rush, Wily gave Bass Treble, a robotic wolf. Although their annoyance factor is high, they're no match for Megaman and Rush.

Strykor: Well, I see by the clock that my interview time is up. It's been a pleasure talking with you Dr. Light.

Dr. Light: The pleasure's been mine. I'll have Auto show you out, as I have to get back to work on my new robot, Megaman X.
0
Login To Vote!
More Articles From Strykor

0
Strykor
Megaman: A history
A look at Megaman through the years.

33
velcrohead
Full House-Where Are They Now?
Ever wondered where they went?
An unhandled error has occurred. Reload Dismiss