The top 10 toys that I always seem to remember, as time goes by.
By delamaize
On
This is my first article, so bear with me.

Christmas morning could be any household, between 1985 and 1995, but this family is mine, and this story is too. Getting less that 3 hours sleep, because of the anticipation of the carnage of torn wrapping paper and new toys makes you too excited to sleep. Years later, do you remember anything you got? Naturally some things stick out in your mind, even into your adult years. Here are my top 10 toys I cant forget. 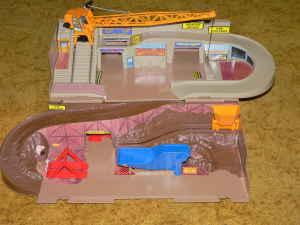 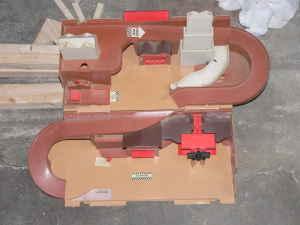 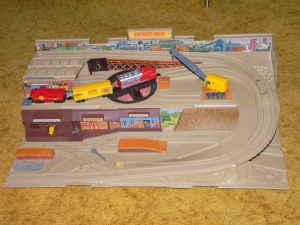 Man, I had 3 of these over the years, it gave me a place to play with my cars and trucks that ACTUALLY looked like the places the kids in the commercials played with their cars. I had the city one, and the construction site one, I remember that the construction one had a huge crane that operated, and lots of little girders that quickly got lost. The city set had a few buildings that popped up and a parking lot at the bottom with a lift. AND a fire station! It was designed perfectly too, you could let a car go from the parking area at the top and it would tear a** around the corner, fly across the strait middle area, then scream around the last corner, and, if the right car was used, slam into the lever that stuck out of the burger joint at the bottom activating a satisfying *Ding* from the bell inside.
The third was the railroad set, ya ya ya I know it isnt technically a Sto & Go set, but it had the same concept. This was my first train set too.
Video off youtube for a auction:
http://www.youtube.com/watch?v=O1GZkIAuLg0 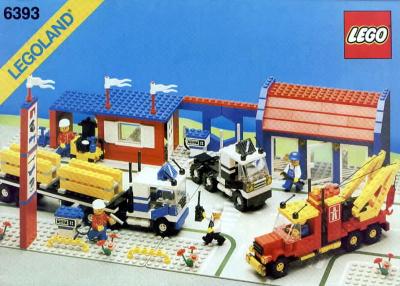 Wow, I was so excited to get this one, at that time it was the biggest, (and I think it might still be) the biggest Lego set I ever owned. 3 trucks, 1 trailer, 5 mini figs, and a plethora of fun little special parts like jacks and coffee cups. It was a huge challenge to build for someone of my age at the time, but the feeling of accomplishment at the time was outstanding. I think I left that one built for almost 3 months, before I decided I wanted to build something else. But I do remember rebuilding it several times. Somewhere in the boxes of old magazines and books from my youth I still have the direction sheet to this set. 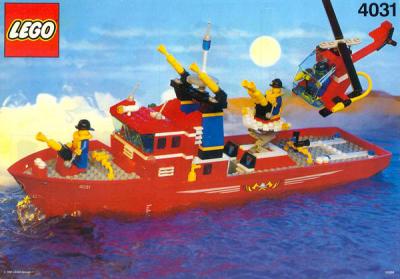 man oh man, this one has a story. This was the first time I actually went looking for Christmas gifts before Christmas. I found this and almost died. Well mom and dad found out about my sisters and my escapades thought their closet to find our gifts. They told us that they took everything back and we were not getting the stuff we saw. I was devastated, but Christmas morning, there it was! And I was thrilled. I was one of the few people that actually had the motor that attached to the little mounts on the bottom of the Hull. It came from a $1.99 speed boat that was long broken. I lived near a small seasonal creek, and I had many a fire adventure with this set. This is the one toy I still own, I was able to track a replacement down a few years ago, and I am never going to let it go again. 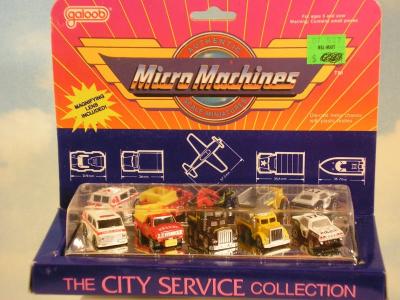 I had literally Hundreds of these things, and they ended up everywhere! When we moved into a new house when I was like 14 or so, we found them under the fridge, under the stove, behind the furnace in the heating vents, EVERYWHERE! These things stuck around the longest because of one of my hobbies that I got into: N scale trains. When I was younger Micro Machines were close enough to N scale. 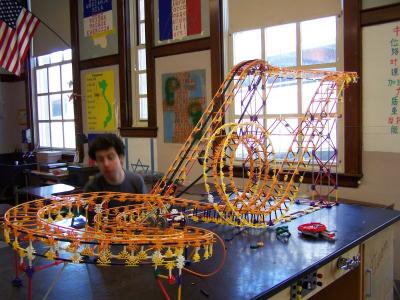 Yet another building toy, I really have no idea why these stick out in my mind, I only had 2 sets, a really basic set, and a rollercoaster that my grandma gave me and my sister. It took my friend Paul and I a week to build it. Didnt really play with them too much, but for some reason they stay in my mind. 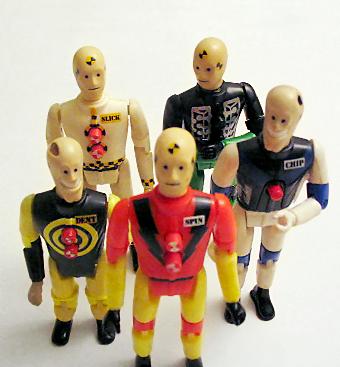 How could you not remember a toy that is designed to be destroyed? I loved these guys, I had 4 figures 2 vehicles, the Crash Sedan, and the Lawn mower. It was so much fun to seat 2 of the guys in the Sedan, and one guy on the lawnmower, and one standing in the intersection or on the back of the mower, the SLAM!! CRASH!! Body parts everywhere! Oh the carnage! THE CARNAGE!! But after a few minutes of resetting, and searching for a head and a arm. They were ready and willing to get mangled again. 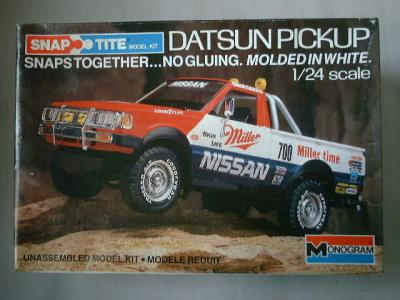 By the age of 13 my mom and dad realized that building sets were the way to go with me, they captured my attention and kept me out of trouble. So the next evolution was Plastic models. They started with simple plastic snap together ones, specifically the first was a little red truck with a little 3 wheeler. This is one of those sets I wish I could find again. I quickly evolved to the harder and harder kits, and a year later they were getting me the level 3+ kits, paints and other building materials. The other fun thing, once I got board with a model, I would take them and modify them to extremes. I had a 1950's ford pickup that by the end of it's life had went from a stock truck, to a lowrider with a new motor from another model, to a monster truck, to a convertible monster truck then finally a lowrider convertible truck with grill and headlights from a 1960's Lincoln continental kit. Oh what fun!

3. Mini Turbo Hopper
(Pic not a Mini, but still close) 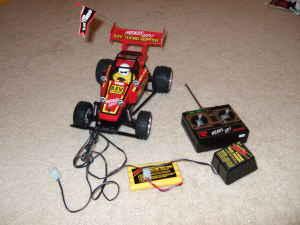 My family wasn't the best off some years. One of these years I wanted a Tyco Turbo Hopper more than anything, and mom and dad didn't have much money. Years later I found out that mom and dad pawned some things that year to give me and my sis a good Christmas. One of the things I got was the mini turbo hopper. Think the same as the hopper but about 2/3 the size, it had a 2 range transmission with the selector on the rear. It took 4 AA batteries in the car and a 9V in the controller. I drove that thing everywhere, to include frozen ponds, dirt, asphalt, and any other terrain it could handle. It actually took a dive though the Ice one time, and to my surprise, it still worked! Somewhere I still have this great little car. 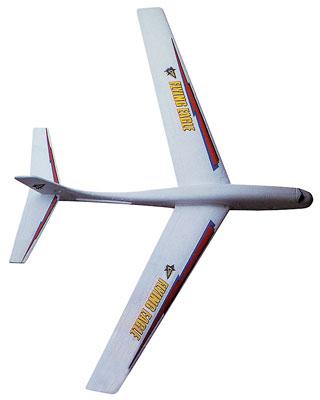 I loved these things, Summer time in my house meant 2 things, First was Paul and I were going to spent more time on out BMX Bikes that anyone else in my school, and mom was going to bring home one of these babies. Man oh man, the first week or two was spent just throwing it around, making it loop, and playing â€œcatchâ€ with Paul. Of course after that it was how far can we make it go Launching it off higher and higher places (I lived on a farm, so the barn was a good place to start) then was â€œhow to we add power to this?â€ witch lead to mutilation using electric motors from past dead toys, propellers from long gone balsa wood gliders, and 9V Batteries. Then and the end of summer, if anything was left, it got blown up with left over firecrackers from the 4th of July. I to this day still get goose bumps and that warm happy feeling when I see these in the store, and kids playing with them. Man I can't wait till my daughter get to the age when she can play with these. 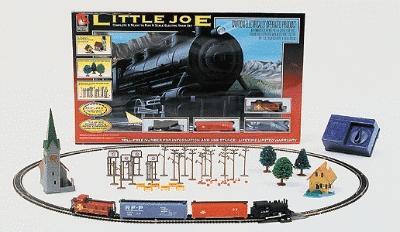 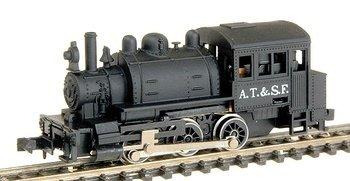 Oh yeah, the toy that is single handedly responsible for sparking life long hobby. I was about 13, and I wanted a â€œrealâ€ train. Mom and dad had always said I was too young. Then one fall, after my Birthday, mom finally said yes, but I had to but it myself. I worked all year and come summer, I had saved about $40. so off to toys r us we went, I had a choice between 4 or 5 different sets, 3 were HO scale (1:87) and had diesel locomotives, then their was the â€œlittle Joeâ€ set it had a steam locomotive, and some buildings, AND some trees and telephone poles, and it was N scale (1:160), witch meant that I could have more in a smaller area. Needless to say I bought the N scale set. That little locomotive spent at least 10 years happily chugging around the tracks, as a kid, it was the center of many of stories in my head about delivering the needed tools to a war factory, or rescue equipment to a team needing it, and I am sure hundreds of other stories. Then I got a passenger coach, and the adventures continued. As I grew up, I spent more time trying to figure out how to keep my happy little engine running, but sadly in 2000 the motor finally burned out and seized up. So she sits in my collection. Waiting for a real layout to be done. Where she will be the center piece of a park, she has earned her place in my collection, and heart.

Well there you have it! Here they are, the Toys I will never forget. Hope you enjoyed it, and I am open to any suggestions or criticism.
32
Login To Vote!

22
Quote O' Matic
Cheif and Huntsman: "What's up cheif, the Lobe back in town cave guy?? -chief- sorry huntsman false alarm. Some dumb rookie was screwing around with the horn of urgency. I chewed him out real good. -hunt- Darn! -chief- what can I say Huntsman? Crime is still down. I'm lucky -Cheif and Huntsman"
Freakazoid! -3
davidyck
sleepwalking escapades
an assortment of sleepwalking storys and other nocturnal activities.

30
JohnMatrix
Nes List of Lists
A summation of part of my NES obsession
An unhandled error has occurred. Reload Dismiss