I look back at this depressing cartoon about a kid the generic city of Bluffington
By Benjanime
On
To me, the early 90's Nicktoons on Nickelodeon have a home in my heart, whether it's the likes of The World of David the Gnome, Rugrats or Rocko's Modern Life. Though there's one show that, granted, seemed interesting to me during my youth, but now sticks out like a sore thumb. That show my friends, is Doug.


Now, don't get me wrong, there are quite a ton of people around my age range that once watched this show regularly as I did, and now look back on it with a similar remark of why we even chose to watch it in the first place. Doug, in a nutshell is about an average eleven year old that seems to get into an emotional crisis in every single episode. Whether it's about losing a pair of pants from wearing a mascot costume or embarrassing himself in a talent show, it's hard to miss that this guy takes all sorts of problems with him wherever he goes.


But where our first visible problem comes in is his so-called "love" for a girl named Patti Mayonnaise. There were few cartoons at the time that had either recurring love interests or ones that were temporary. This one however was so permanent that it seemed like the writers needed to prevent the two from getting too clingy, and it shows, in a depressing manner. 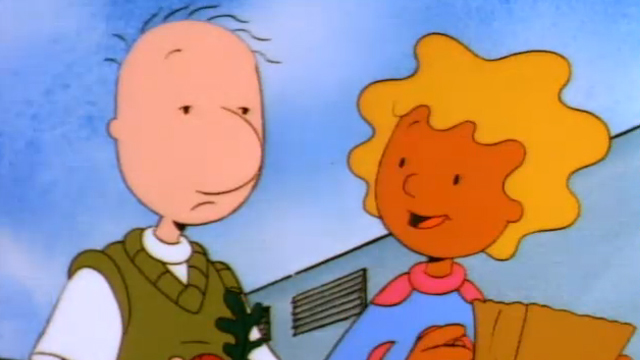 And yes, I know in cartoons for the younger crowd that there was supposed to be a non-clingy rule, but it in the show it's as if Doug doesn't even TRY to impress her, moreso you see him constantly predicting about something bad that's to happen in his current situation. So my big question in this part is, why does Doug never seem to look at the positives? Hell, why is he the only character like this? It's funny enough how some people reminisce of this show and say "well Doug focused on a lot of teen problems and drama at the time". Yeah, a guy that can't even ask a girl on a date is a teen problem.

And speaking of "teen problems" there's the usual bully whose job is to make the main character feel low, as if he hasn't made himself feel low already. Roger Klotz runs into Doug from the beginning of the show as Patti did, and yes he pops up quite frequently. 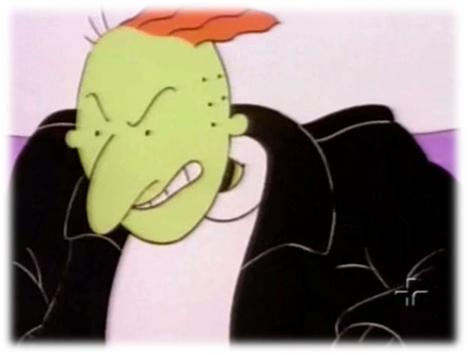 Though I really wouldn't label Roger as a "bully" all you see him do is harrass Doug and get him to do stupid stuff. Calling for neematoads (what the fuck?) and throwing a rock at an abandoned building being some examples. I thought bullies were those kinds of people that would hold kids over their legs and dunk their heads in a toilet or give them wedgies. I guess Roger would never have the balls to do either of those.

Next we have Doug's sister, Judy. Apparently her role was to bring back a beatnik lifestyle, but it failed miserably. She wasn't hot, and she certainly wasn't convincing enough to be the leader of a beatnik revolution. That and she's also one of those people you'd love to hate 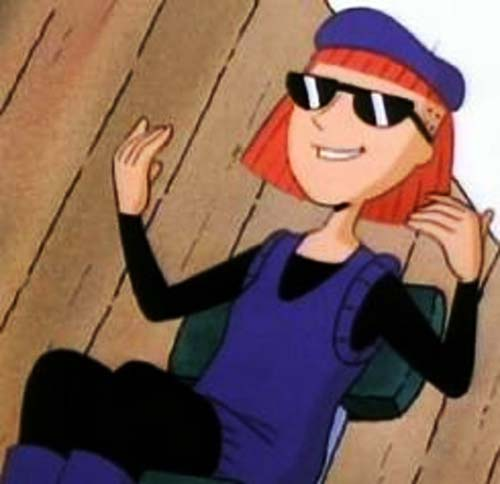 And one final character that I feel that I need to bring up is Doug's school assistant principal, Mr. Bone. Out of all of the Nicktoons airing at the time, who the hell would think of brainstorming a character that enjoys yodeling? And thanks to his obsession with said genre it brought Yanni into the mainstream of music. Yep, we definitely need to bring back shitty music like that. Now opera, I can take. It just screams art as a fat lady sings different pitches of notes. 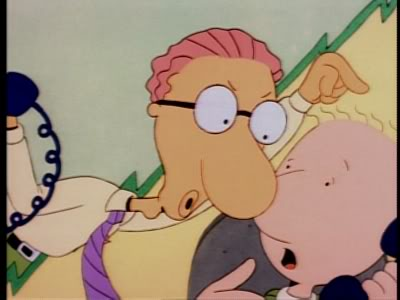 Yeah, I seriously can't picture a loudmouth principal as a yodeling connoisseur. Sigh, moving on...

Well to close this article I can definitely say that if there's one thing that Doug taught us, it's that he made being a loser look cool. He's got a sweater vest, a banjo, and a broken heart. It reeks of loser more than singers these days reeking of talent. Goodnight everybody.
11
Login To Vote!
More Articles From Benjanime 26
JSwiftX
The Dark Side of Doug
All is not well in Bluffington...
An unhandled error has occurred. Reload Dismiss