A smattering of some of my fave and not so fave Atari 2600 games.
By CaptainLou
On
Greetings RetroJunkies! CaptainLou here again with another article, a bit shorter this time hopefully. This time we're setting the wayback machine for the days of the Atari 2600. Like many of you reading these articles, my first "official" game system -- non-computer -- was the good ol' Atari. Like much of everything else from the 70's it had the wood grain goodness on it along with the black ridges that held about 6.8 cubic yards of dust and other assorted crud in them that, unless you used about a half a box of Q-Tips and a 5 gallon bottle of rubbing alcohol could never get it fully clean. I got the system for Christmas one year and it was a huge step towards my love affair of video games. 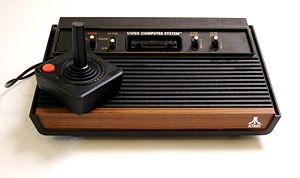 Thank you, Nolan Bushnell, for giving us this glorious altar of 80's video game goodness.

This isn't going to be a full retrospective on the Atari 2600 as there are plenty of those out there and I would rather not try to take away from any of those great articles. That and I just don't want to do all of the research about everything Atari and, if I miss something, get hammered by someone. So instead, I figure I'll just write about a few of my favorite and why and in no particular order as apparently on here lists with rankings piss some people off. 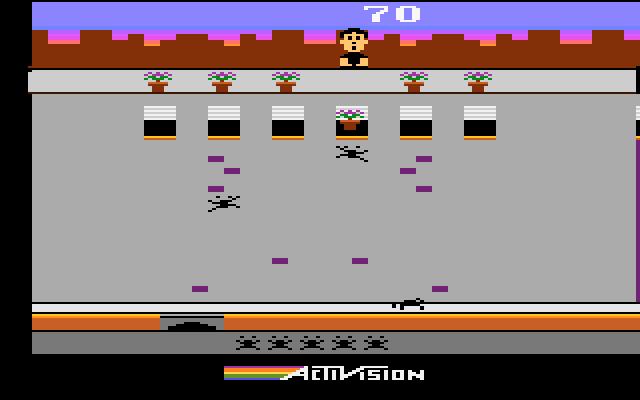 Crackpots by Activision
This was the first game bought for me. The Atari I got for Christmas didn't come with any games or hookups so had to wait until the Monday after Christmas to get that. All that Prange Way had had left was Crackpots. You're a gardener guy named Potsy atop a building who is guarding 6 windows. Spiders are coming up the side of the building to go in the windows and you have to hurl plants down at them. Each wave has different color spiders that do different things: straight up, diagonal, etc. and they come faster and faster. It was pretty fun and got frenzied at the end of the game. 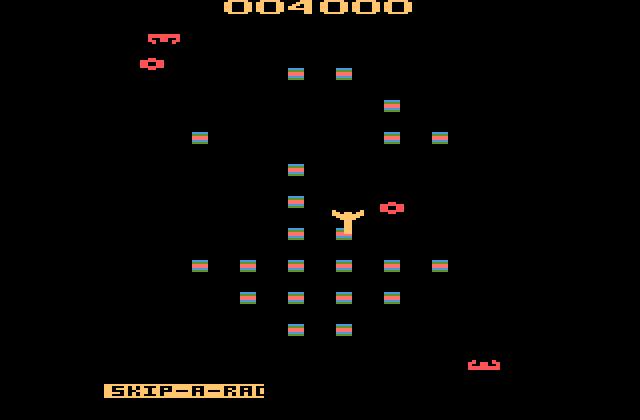 Solar Fox by CBS Electronics
Space game where you have to get 'solar panels' as fast as you can. I remember having a babysitter bring it over to the house and playing it. It's not a super hard game but trying to get the best times is definitely tricky with the joystick as it's not the most responsive unit in the world... 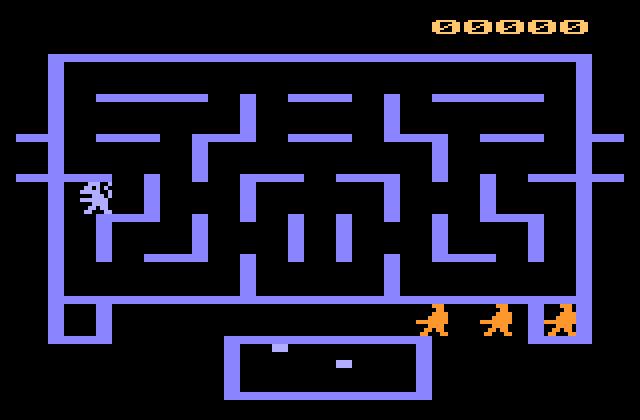 Wizard of Wor by CBS Electronics
WoW is based on an arcade game that pits you in a maze against a few different creatures with abilities. One lumbers around, another can go invisible, another is a fast guy who shoots quick lasers. Then there's the wizard who shoots and teleports. Kill him and the game freaks out and you start all over again. I this game from Grandpa one time when he visited us. My Grandpa wasn't really a big gift giver so it was really one of the only things I got from him. Some get Grandpa's pocket knife, some get Grandpa's watch, I got a game from Grandpa. 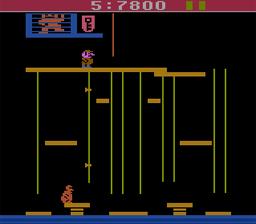 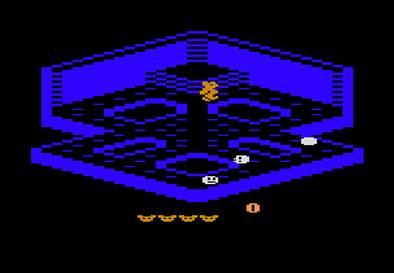 Donkey Kong Jr. by Nintendo and Crystal Castles by Atari
Ok, so both of these games are only because of my being a less than angel as a kid. There was a short stretch as a kid that I was a bit of a klepto. Both of these are games that I nicked from KayBee Toys in our local mall. The funniest and most ironic part of this is that the guy who was the manager at that time is the same guy who interviewed me and gave me a job there less than 10 years later. On the plus side, I knew what to look out for against shoplifters later. 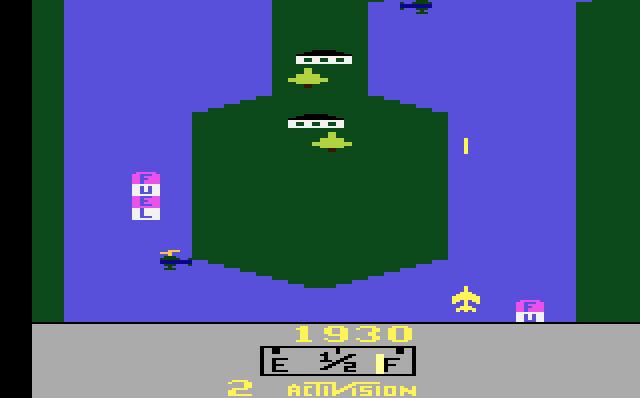 One of my favorites. Pretty simple premise...fly from bottom to top, shoot (almost) everything, don't run into anything or run out of gas. Starts off easy enough but towards the later "stages" there's stuff flying all over towards you and getting to the gas tanks to refill is a huge feat of testicular fortitude and pinpoint accuracy with the joystick. I played this (along with many of my other faves) at a babysitter's house while both my folks worked. The sweet simplicity of it is what keeps it so close to the heart. Damn...now I'm thinking of Rush and "Closer To The Heart". Moving on... 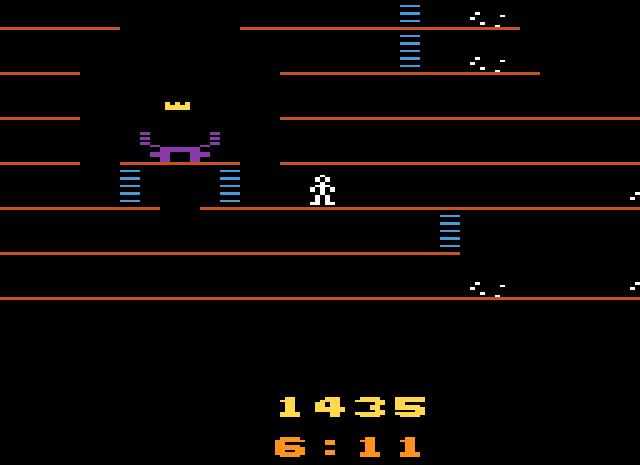 Mountain King by CBS Electronics
You are looking for treasures in a superdark place with ladders and levels armed only with a flashlight. You have to go all around to get points and then find some crown and then get out as fast as you can. Bats and a big ass spider are there also to make life difficult. If I remember right, it has snippets from Grieg's "In The Hall of the Mountain King" as well, which made it cool even though the game is joystick destroying difficult and frustrating. 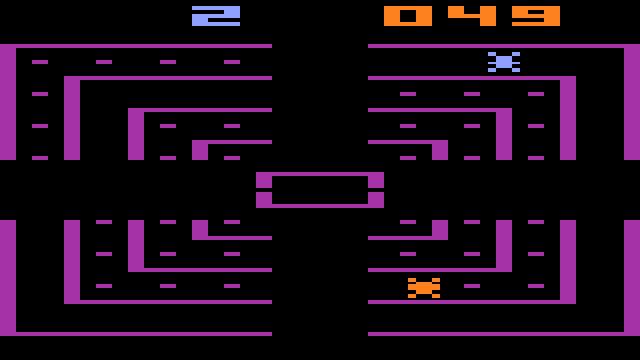 Dodge 'Em by Atari
Drive your car, trying to get all of the dots and not crash into the computer car. You can hold the button to go faster and change one lane at a time or not and slide 2 lanes. Computer was a dick and aggressive and it was a fun addicting game. This was the first game I bought myself with my own money earned through helping out around the house. 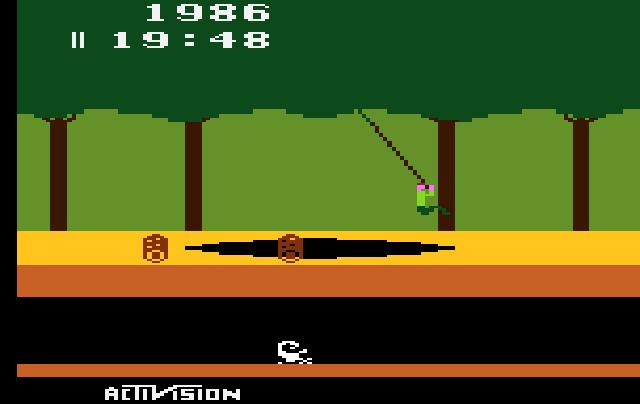 Pitfall! by Activision.
LOVE this game. It's incredibly "simple". Run, Jump, don't die. The jumping noise and the sound of swinging on vines is one of those always recognizable sounds that anyone who remembers playing this as a kid or, well, ever will hear somewhere else and go 'I know that sound!!' You get 20 minutes or 3 lives whichever comes first to find as much treasure as you can. To this day I don't think I've made it to the full rotation of screens but I have done the full 20 minutes. Another game played at the babysitter's house. She was awesome and I had a crush on her teenage daughter. 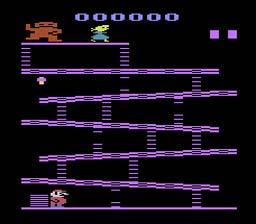 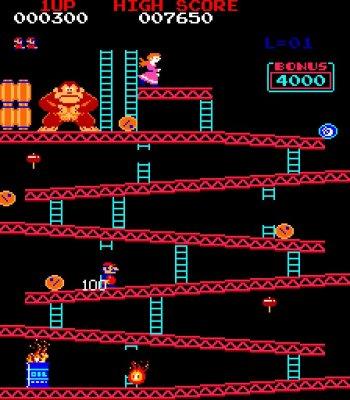 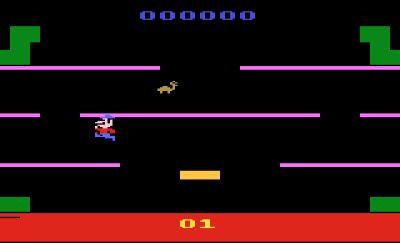 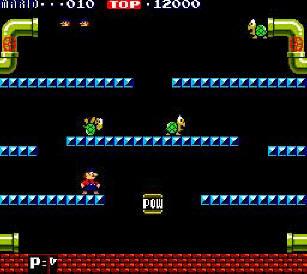 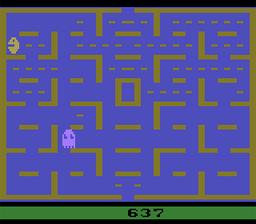 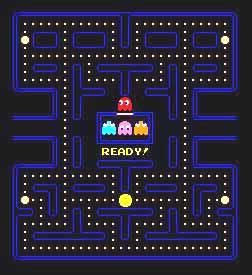 Pac-Man by Namco
I'm pretty huge fans of all of these games in the arcade sense. While these were fun to play for free at home, this distinction comes from the huge disappointment of how much different they looked and sounded on the Atari. Now that I'm older and understand RAM and storage and such, I definitely get why they looked sucky compared to the arcade but as a kid it was just a huge bummer. Still fun to go back, play, and just to chuckle at, though. 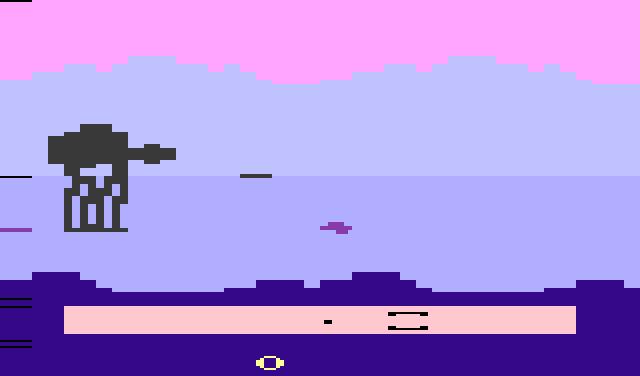 Empire Strikes Back by Parker Bros.
I've been a Star Wars fan for a long time (not as big of a fan as now, though) and playing this one was just fun. Shooting down AT-AT walkers with the little snow speeder made me feel like I was taking on the Empire. I remember going to a friend's house and playing this and hearing the Atari-ized version of the Star Wars music and was pretty excited they didn't really mess it up. I think back to that time and laugh because he was a pretty big braggart how he got such and such a great score and how he was so awesome at it. I played it one time and tripled his score without even being told how to play. He got pissed and threw the game across the room and we only played stuff he would be able to win at. Kids. Hahaha. 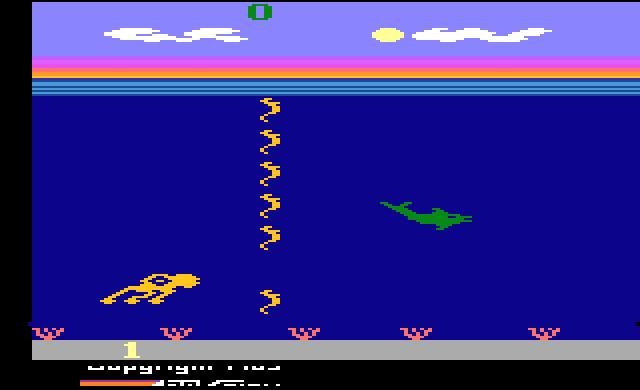 Dolphin by Activision
This was kind of a weird game. It was one of the first games I got so I played it to death even though it didn't make much sense. You are a dolphin - duh - and are running from...er, swimming from...a squid who looks like he's trying to kiss you but is actually bent on eating you, I guess. You hear a sonar-type tone which corresponds to where a hole in a wall of sea horses is going to be once they come on screen every couple seconds. If you run into them, they slow you down and the squid can catch up. The walls come faster with higher levels. There are also colored waves - sea currents, I suppose - that if you hit one going with you, you get a speed boost (so does the squid) but one against you slows you down. Then every so often there's a seagull that, if you jump out of the water and get, you can go after the squid and kill him much like a power pill in Pac-Man. Like I said very weird. 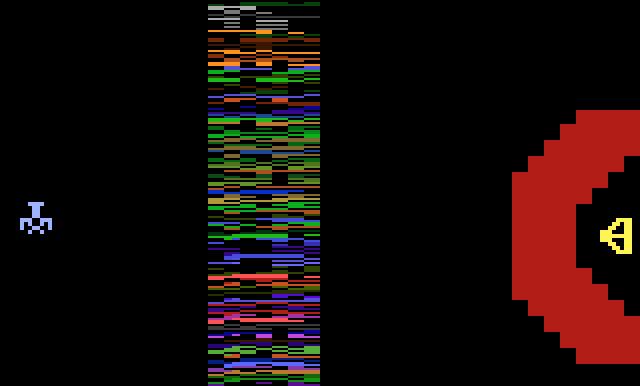 Yars' Revenge by Atari
This was another just strange game. You're this bug looking thing who is shooting at a face with a gas mask on. The face is hidden behind a wall that you chip away at and there's a little dot that slowly and persistently comes after you. There's a rainbow colored neutral zone in the middle and every now and then the face turns into a fireball and zooms towards you to kill you. After you open up the wall, you can touch remaining wall to get a super shot that waits behind you to be fired. If the super shot doesn't kill you and it hits the face, you win and start again. Even as a kid who believed in and enjoyed everything science fiction, I was still confused with this one. Fun, though, but very, very odd. 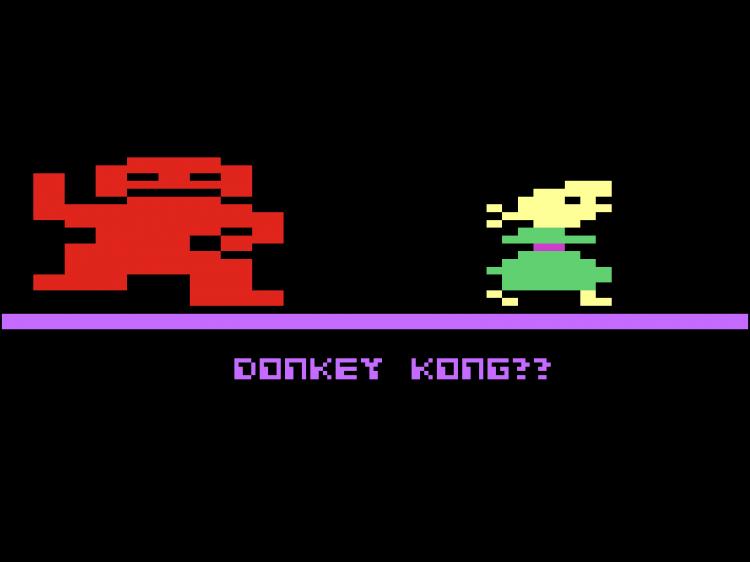 AP - Kool-Aid Man, once beloved mascot for a popular children's drink, shown while on a rampage chasing his agent/nutrititionist yelling 'Get back here! You ruined my life!'. By advice, he went on Jenny Craig for weight loss in order to get healthier but ad executives simply didn't want a Kool-Aid Man that couldn't break through walls anymore without the help of special effects and promptly dropped the newly thin spokes-pitcher like a hot turd.

So even though I have Xbox, Playstation, Wii, and a buttload of computer games, I still thoroughly enjoy going back and playing the Atari 2600 games occasionally. I will admit, though, I don't have the system currently hooked up but Stella is a pretty great emulator so it's all good.


As always, thanks for reading.
29
Login To Vote!
More Articles From CaptainLou

19
Quote O' Matic
Principal: "Hank, I can't have your son goin around kicking people in the testicles -Principal"
Added By: System
King of the Hill
An unhandled error has occurred. Reload Dismiss