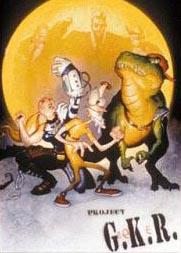 Mister Moloch is the CEO of Moloch Industries, the giga-corporation which owns and operates most of the Earth (not to mention the moon, mars, and most of the more upscale parts of the asteroid belt). Moloch is one small step from world domination. And that's a step he's eager to take. In order to achieve his goal of total conquest, Moloch initiated Project GKR (Geno-Kinetic Research). Helmed by the brilliant but unstable Doctor Maston, the aim of Project GKR was to create the perfect corporate warrior; an artificial human with fantastic powers, whom Moloch could use to crush all who opposed him. Project GKR succeeded beyond Moloch's wildest dreams, resulting in a synthetic man - known as "Geeker" - with complete control over his own molecular structure. Geeker had power enough to destroy the world... or conquer it, for Moloch. But before Geeker could receive the programming which would enable him to control his powers and make him a slave to Moloch's will, he was stolen by a streetwise thief named Lady MacBeth, who was aided by an intelligent dinosaur named Noah. Lady MacBeth and Noah thought they were stealing a device they could sell on the black market. But when they opened the canister they had stolen, instead of some new high-tech weapon, they found Geeker. Without his final programming, Geeker was innocent and childlike; possessing fantastic powers but largely unable to control them. Noah and Lady MacBeth - whom Geeker promptly nicknamed "Becky" - realized they had something incredibly valuable on their hands. But they also realized that neither of them were hard-hearted enough to sell a human being. It was clear that Moloch meant to use Geeker to destroy anyone standing between him and world conquest - probably starting with Becky and Noah. Moloch would stop at nothing to get Geeker back. Becky and Noah had no choice but to keep Moloch from capturing Geeker at all costs.