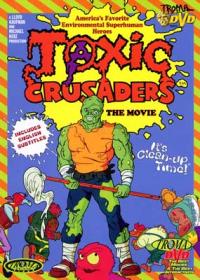 The cartoon follows roughly the same plot as the films The Toxic Avenger and it's two suceeding sequels. A complete and hopeless nerd, Melvin, falls into toxic waste and becomes Toxie, a hideously deformed mutant of superhuman size and strength. Teaming with other mutants, No-Zone (whose power comes from radioactive sneezes), Major Disaster (he can control plants), Head-banger (Fender + Bender, fused together-based on the siamese twins in Troma's War) and Junkyard, a dog/hobo hybrid to become The Toxic Crusaders! Together they fight crime in every sense of the word and finally turn their attention on the Apolalypse Inc. of the movies Toxic Avenger Parts II & III, although in the series the chairman is an alien as opposed to Satan. The series follows the attempts of the crusaders to fight crime and be enviromentally safe.

11
Quote O' Matic
Buck Rogers: "If you call that interferring, there's something wrong with your Funk and Wagnalls."
Added By: System
Buck Rogers in the 25th Century
Related Articles